Kangaroo Island is well named – but the thousands of roos that bound around are joined by a host of other Australian wildlife, best seen from new hiking trails

People get incredibly excited about driving into the middle of nowhere to watch koalas doing absolutely nothing,” observed wildlife guide Paul Boehm with a wry shake of his bush-hatted head. Paul’s trick is knowing where to find the particular trees whose leaves the koalas relish. Sure enough, in the crook of almost every manna gum in this patch of forest was a sleepy ball of grey fur. Faced with cuteness overload, our camera motors whirred into overdrive.

“Believe it or not, they are randy buggers,” Paul continued. The koalas of Kangaroo Island have multiplied to such an extent that they are decimating the gums, so a programme of birth control has been launched. Ear tags identify sterilised koalas – left for a buck, right for a doe. Island joke: how do you remember which is which? Women are always right.

Next, Paul drove us in his roo-bar-defended 4WD to Seal Bay, where a colony of around 1,000 Australian sea lions breed and pup. Protected these days, the species was hunted almost to extinction and remains endangered though you might not guess it here. Unlike the furtive koalas, sea lions are anything but coy about mating. Big, blubbery bulls were blustering about on flippered feet, barking and charging at potential rivals while competing to herd sows into remonstrating harems. We watched their rumbustious couplings from our hiding place in the dunes – unnoticed, like all good voyeurs – while smells of salt, sex and sea lions gusted off the beach. 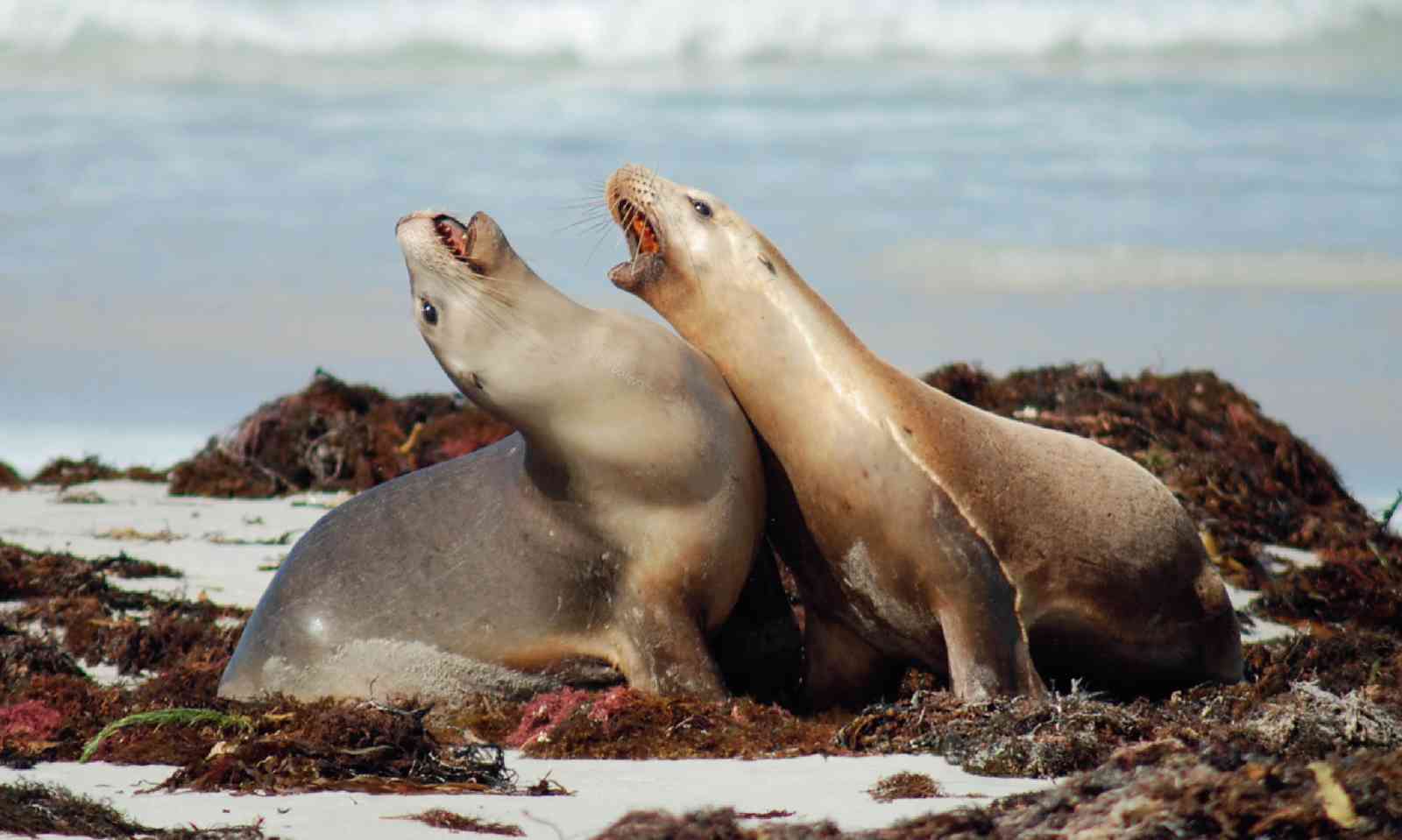 Kangaroo Island, known as KI, is 20km off the South Australia coast. There are two ways to get there: a half-hour propeller-plane hop from Adelaide; or a choppy ferry ride from Cape Jarvis, a couple of hours by bus from the state capital. I chose the latter, winding through vineyards and glossy olive groves that underline the region’s Mediterranean climate.

On maps the island appears as a speck in the Great Australian Bight. However, at 150km long by 57km at its widest, it is larger than Kent. The population is a mere 4,500, with most residents living either in Kingscote, the ‘capital’, and a scattering of other tiny settlements. This leaves swathes of human-free country; some is farmland, but a third of KI is national park or protected.

Koalas and sea lions are just two stars in the extravagant cast of creatures that lend KI the feeling of a huge nature reserve without fences. The island bounces, crawls, slobbers and soars with weird and wonderful wildlife. There are upwards of 60,000 kangaroos and perhaps twice as many wallabies. You find echidnas and platypuses, bandicoots and possums, goannas and snakes, penguins and pelicans. KI is sometimes described as the ‘Australian Galápagos’, because of the way animals and plants evolved into distinct species and sub-species after rising sea levels left it adrift from the continent at the end of the last Ice Age. With abundant food and in the absence of predators such as dingoes and foxes, the animals proliferated like nowhere else in Australia. 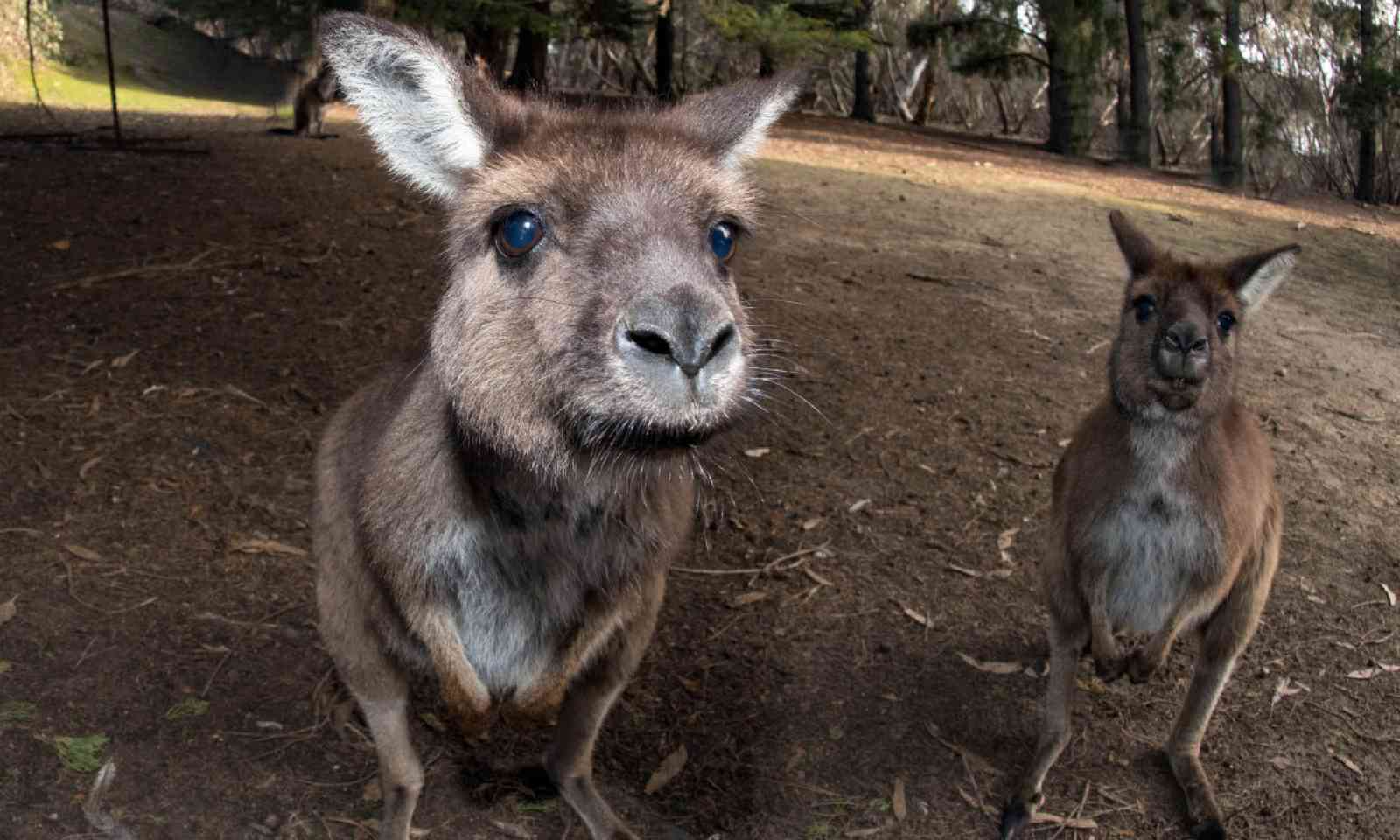 The relatively small, dark-brown Kangaroo Island kangaroo is merely the most obvious of numerous endemics. “Ah, a boomer!” announced Paul, stamping on the brake to avoid the big old retired male that hopped into our path moments after we left Penneshaw ferry port. Soon we were to see hundreds more roos, bounding in mobs or foraging alone in the mallee scrub of Dudley Peninsula. The grey, 45cm-high tammar wallabies were more skittish, hiding in the undergrowth to evade preying wedge-tailed eagles. They emerge into the open only at dusk and are not, sadly, particularly well evolved to traffic awareness, judging by the many roadside corpses. Another island joke: what do you call a wallaby crossing the road? A was-aby.

Captivating though my vehicle-bound introduction to the wildlife was, it was a new string of hiking trails that had, as much as anything, enticed me to KI. The idea is that one day it will be possible to hike from lodge to lodge, though this is not yet on offer. So, with former park ranger Chris Baxter, I drove to Flinders Chase National Park in the far west of the island to scramble along the Rocky River from the high ground down to the sea. Tan-skinned Chris – part-time hiking guide, part-time zoologist and full-time Aussie, whose idea of paradise is to head into the outback with his swag – was a fountain of facts.

We started from a charred patch of eucalyptus forest, where a lightning-sparked bush fire had swept through last year. Chris began by telling me about Matthew Flinders, “the biggest cheese in KI history”. The Lincolnshire-born explorer, whose name the park remembers, labelled the uninhabited Kangaroo Island when he landed here in 1802 and found it jumping with friendly marsupials yet to learn about guns and sailors’ taste for roo meat. It was Flinders, incidentally, who coined the term ‘Australia’ as shorthand for the southern continent, Terra Australis. 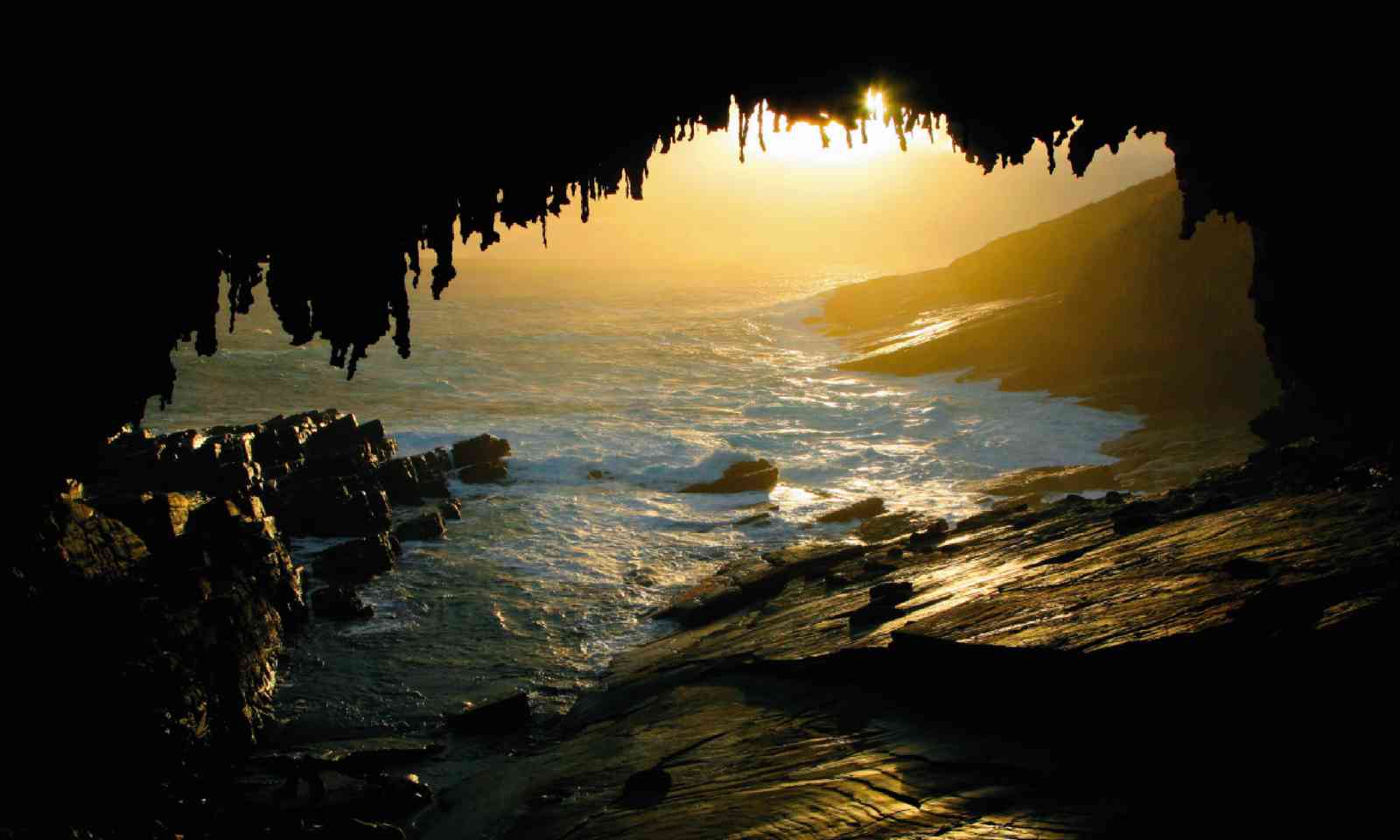 Beyond the scorched earth, our trail criss-crossed the almost-dry river via fords and wooden bridges. We stopped by a shaded pool where, according to Chris, “as often as not I’ll see a platypus or two out to play”. This Australian wildlife mascot, along with the koala, is not indigenous to KI. Rather, both species were introduced in the 1920s when threatened with extinction by predators and fur hunters on the mainland, in what Chris described as “a Noah’s Ark kind of idea”. However, while the randy koalas bred like there was no tomorrow, platypuses survive here only in small numbers and nowhere other than Rocky River. Alas, no duck-billed sightings for us on today.

On the plus side, an echidna wiggled out from under a bottlebrush bush. It is the world’s only egg-laying mammal other than the platypus but, unlike its cousin, a short-beaked sub-species of echidna is a KI endemic. With long, blond spines and an inquisitive little face that seemed unfazed by our presence, it looked like an overgrown hedgehog. However, when I learned that echidnas mate by means of a four-headed penis and hatch babies (‘puggles’) the size of coffee beans, which suckle by nuzzling nipple-less mammary glands in their mothers’ marsupial-like pouches, I knew I had met something special.

We ended at Snake Lagoon where the river seeps into saltbush marshes fringing Cape du Couedic. Here, cliffs reared up from rocks and islets where New Zealand fur seals were frolicking at the mouth of a cathedralsized sea cave, which hung with stalactite fangs. The freakish geology seemed to mirror the outlandishness of the wildlife: I gazed across a surf-battered bay to a headland where gigantic, rust-coloured boulders – hollowed and sculpted by the elements – were perched. As I got closer, one rock seemed to morph into a snarling carnivore; another became a giant-beaked bird.

These were the Remarkable Rocks, so labelled by Flinders in his matter-of-fact way in 1802. Other coastal landmarks, such as Cape Bouguer and Vivonne Bay, owe their names to his fellow explorer of the southern continent, Frenchman Nicolas Baudin; he followed shortly afterwards and was the first to map the island. Driving around KI, I also stumbled on some odder-sounding places, such as Didjabringabeeralong, which at first I took to be an aboriginal name... 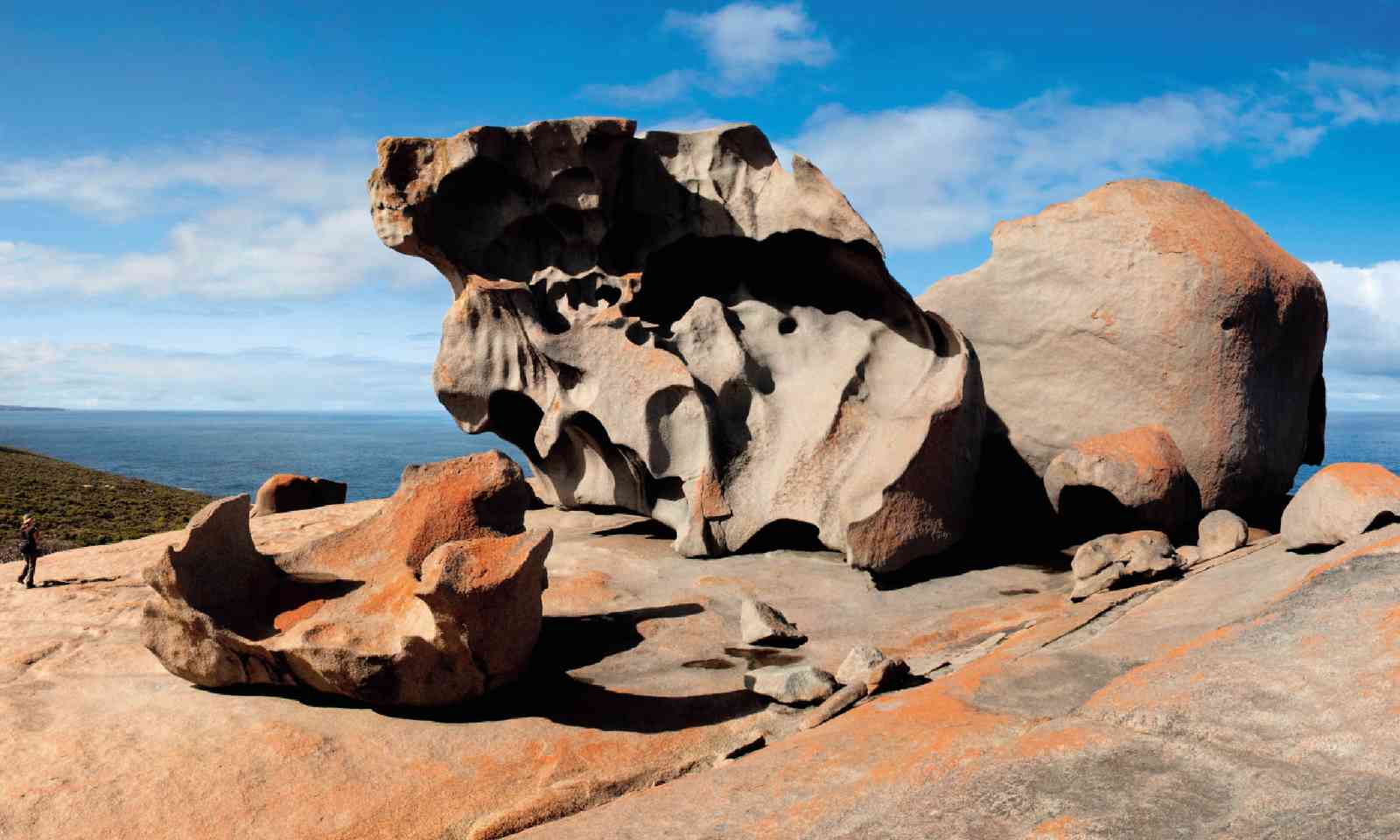 There were no humans on the island when the first Europeans arrived and it is only in recent decades that archaeological digs have unearthed grinding stones and spear heads. Indigenous Australians, it is now known, lived here before KI separated from the mainland, and left about 2,000 years ago. Why they deserted an island apparently rich in game, and climatically hospitable, remains a mystery; the nearest thing to a clue is that the name for KI in the language of the mainland Narrinyeri tribe is Narungawai – ‘hunting place of the dead’.

Palaeontologists have also found fossils indicating that the age of megafauna endured much longer on KI than on mainland Australia. As recently as 5,000 years ago, for example, there were 3m-tall flesh-eating kangaroos and wombats the size of rhinos. Perhaps people found that it was simply safer on the mainland.

Since Flinders’ and Baudin’s discoveries, European settlement on KI has been sporadic. First came gangs of sealers, deserters from ships and escapees from the penal colonies of New South Wales, some of whom captured Indigenous Australian women from Tasmania and brought them here as ‘wives’. When the British Empire’s South Australian Company founded the first formal colony in 1836, they reported having to subdue lawless and brutish settlers. At the end of the Second World War ‘soldier settlers’, including Chris’s late Dad, were offered incentives to populate the island: “Demobbed from serving in the Pacific, my old man was granted land and a livelihood here, so he woke up and discovered he was a farmer.”

The gentler north and east are where most people settled. Kingscote (known as ‘the big smoke’, irony intNormalended) feels like a frontier town with wooden-fronted shops and a pub strung along a single main street. Beyond, rolling countryside unfurls, freckled with sheep and cattle. There are specialist dairies, vineyards and the buzzing Clifford’s Honey Farm, where I watched the world’s only pure Ligurian bees, descendants of hives brought from Italy in 1881. Over the past few years something of a food-and-wine revolution has taken off, with KI produce commanding premiums among the foodie sophisticates of Melbourne and Sydney. 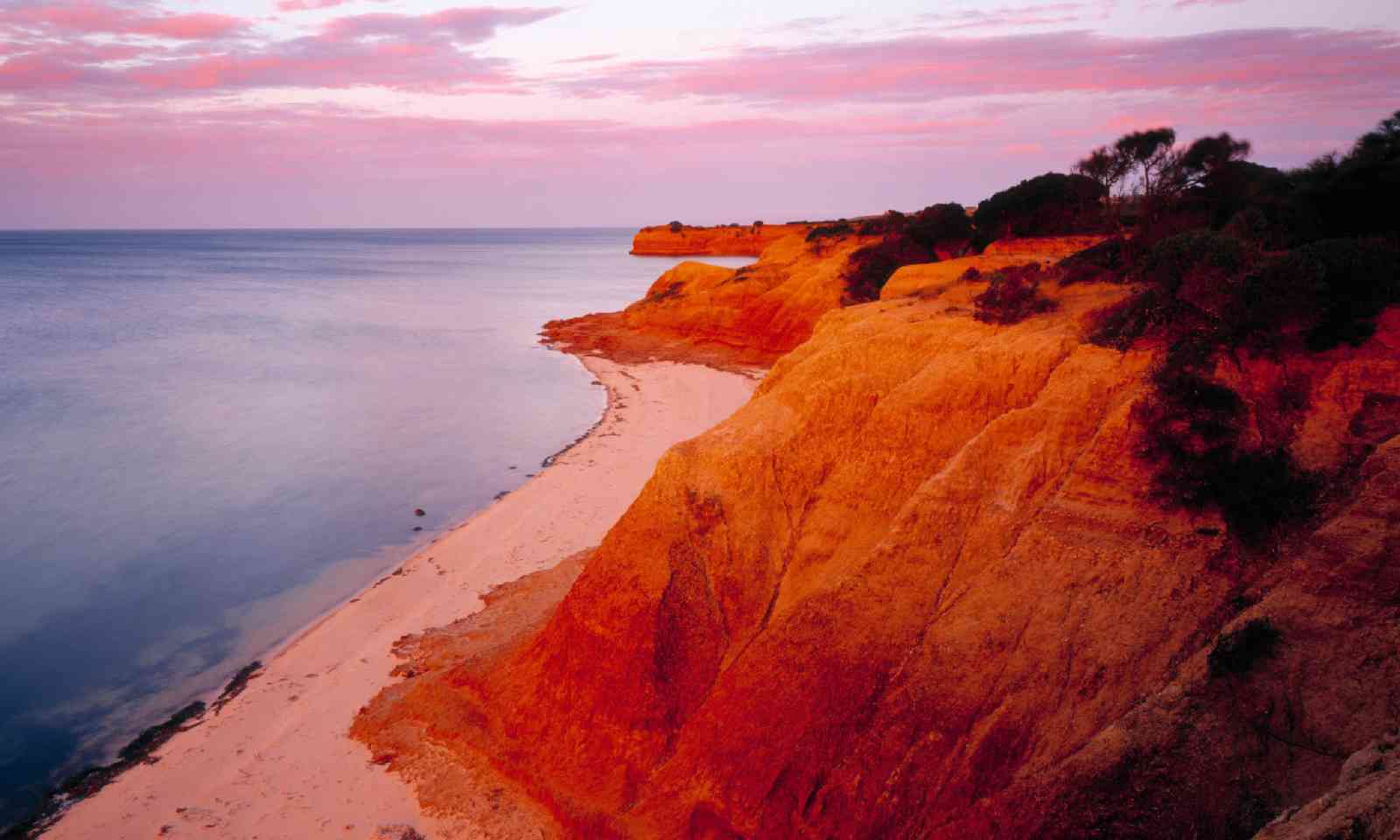 I was served fabulous meals at Seascape Lodge, my base, where former farmers Paul and Mandy Brown now let three rooms of their hilltop home. To a backdrop of sweeping views down to the 5km crescent of Emu Bay, we guests joined our hosts each evening to dine on island fare such as King George whiting, rack of tender lamb and bottles of Bay of Shoals sauvignon blanc, grown just beyond the end of the drive.

The wildest part of KI is the south coast, where I was lured by the prospect of another day’s hike, this time round the Cape Bouguer Wilderness Protection Area and up South West River. I started at the Southern Ocean Lodge, were opulence meets the sea on perhaps the island’s most isolated point. Celebrities and moneyed guests (which counted me out) have been coming to this unlikely hotel since it opened in 2008, staying in suites of ceiling-to-floor plate glass. “The future for KI is offering high-spend, lowdensity ecotourism like in, say, Botswana,” a tourism official had told me. Following the African safari lodge model, guests here are treated to wildlife drives at cocktail hour, billed as ‘Kangas and Canapés’. (“Booze and roos” my jolly swagman friend Chris had snorted.)

There wasn’t a soul around on the Hanson Bay hiking trail when I set off, first fringing a beach strewn with driftwood and shiny white cuttlefish bones, then climbing to a limestone headland with the full force of the Roaring Forties in my face. I found that the ocean has a quite different temper here: stormy and cold with wind-torn waves crashing on the sand in a fizz of salty spume. South, there is nothing but waves, whales and icebergs until Antarctica. The mood changed again as the trail swung inland to follow the river through crunchy green samphire before plunging into camphor-scented woods where silvery eucalyptus leaves tossed dappled sunlight on to my path. Giant goanna lizards scuttled in the scratchy undergrowth; the occasional koala clung to a tree. Beyond the forest, the path opened into bush and scrubland where I was suddenly among the island’s namesake marsupials in overwhelming numbers: roos and their joeys spread out over rippling scrolls of outback as far as the eye could see.

If Flinders was greeted with a scene like this when he made landfall two centuries ago, he didn’t beat about the bush when christening Kangaroo Island.

Main Image: Kangaroos in the sunset on kangaroo island (Shutterstock)