This Polish city has had its fair share of tumult, but now that Gdańsk is out the other side, its Gothic grandeur deserves attention...

To say Gdańsk’s past was eventful would be understating it; even by Polish standards. If its locals were sportspeople, they’d be tug of war champions. For the 20th century in this port city was very much that. It was annexed as Danzig by the Allies in 1920 following the First World War. It was then the first place the Nazis attacked in 1939. While the city’s historic Main Town was flattened during the Second World War and Communist rule took hold, the locals didn’t take it lying down – the Solidarity movement uprising founded among its shipyards during the 1980s meant that by the turn of the next decade Poland was a democracy.

Today, Gdańsk thrives without the drama. Its compact Gothic Main Town has been meticulously rebuilt to its medieval glory and deservedly claims to be one of Poland’s prettiest old cities. Recent additions of quality hotels and eateries have seen visitor numbers grow.

Part of the city’s attraction is that for travellers, Gdańsk is actually only one-third of the story – it forms the Tri-City along with the summer haunt of Sopot and modern Gdynia, both of which add extra dimensions to Gdańsk’s history.

One of the city’s icons, the 17th-century Neptune’s Fountain, miraculously survived the post-war destruction, proudly standing in Dlugi Targ (Long Market). It’s said that it once flowed with Gdańsk’s famed liqueur, goldwasser. You can sip it in its many restaurants today, the ideal toast to Gdańsk’s gritty past and charming present.

The airport is serviced by its own train station, directly connecting Gdańsk Glówny, the city’s main railway, once an hour (30 mins). The station is a 10 min walk from Main Town. The ZTM public bus (no. 210) also connects the two for an even cheaper alternative (35 mins).

Low-cost airlines like Ryanair and Wizz Air have greatly increased their domestic connections in recent years, making a Polish twin-centre break a more feasible option. The capital Warsaw, charming Kraków and cultured Wroclaw are all within a single hop of Gdańsk, with regular and affordable flights meaning its never been easier – and cheaper – to take the time to explore Poland’s charming cities. 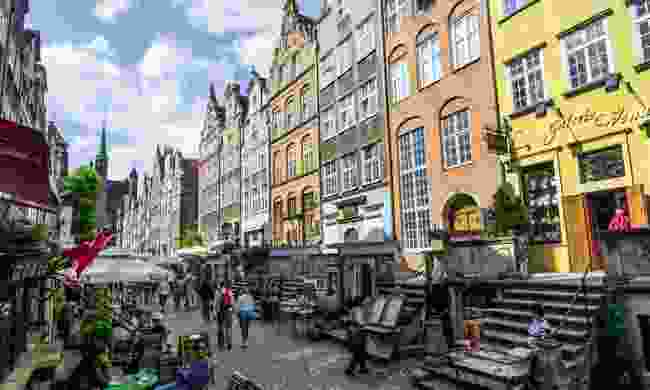 Begin where the Polish kings once did – at Upland Gate, the entrance to Gdańsk’s historic Main Town. Just behind it lies the 15th-century Foregate, once a fortress and a jail but now houses the Amber Museum – ‘Baltic gold’ is big business here.

Next, parade along Ulica Djuga, the Main Town’s primary artery, spying the elegant facades that flank both sides. Grab a snack in one of the bakeries along it, before catching sight of the gilded tower of the town hall. Inside, the Gdańsk History Museum depicts the building in its 16th-century heyday. Soak up the bustling Ulica Targ before going through the Lane’s other bookend, Green Gate, and curving left along the Motlawa River. Here, restaurants dominate its banks, but the Gdańsk Crane is a standout feature, once the largest of its kind in medieval Europe.

Dart left and gaze at the charming terraces of Ulica Mariacka – arguably Gdańsk’s prettiest street. At its end, you’ll reach St Mary’s Church. Return to the riverside for a large chunk of Gdańsk’s story in the National Maritime Museum, split across both sides of the river, before tucking into pierogi (dumplings) on its banks.

Top tip: Fuse tradition with a tribute to history by sending a postcard from the old Polish Post Office, which workers defended from Nazi attack back in 1939. 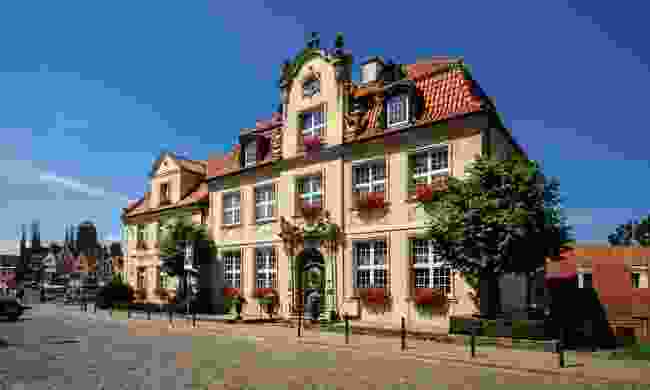 Affordable hotels were once scarce in Gdańsk’s Main Town, but no longer. Its centre now caters to all wallet sizes but if you don’t mind staying a little further out, the fashionable Wrzeszcz district offers more comfort for your buck.

Top end: On the banks of the Motlawa River, the view of Main Town from Hotel Podewils is tough to beat. Its baroque facade and timber-furnished rooms mean it is very nice to look at too.

Mid price: Wedged between Gdańsk’s main train station and Main Town, Central Hotel represents a forgotten era. It had stood empty for years, but its refurbishment has been spectacular.

Budget: Though Willa Albatros is set a fair distance from the centre, in Oliwa, it’s in prime place for exploring the district’s landscaped gardens and is handy for the Tri-City.

The historic quarter of Gdańsk isn’t big. It can be easily covered in a day, with some healthy visits to its fine museums filling a second day. One of its best, though, lies to the north. The European Solidarity Centre is filled with excellent exhibitions paying tribute to the opposition movement against Polish communism in the 1980s.

Nearby lies plenty of history at Westerplatte, where the Second World War began on European soil. Gdańsk’s suburb of Oliwa, with its lush parkland, is only a short train journey away; the line extends to its Tri-City partners, Sopot and Gdynia – the silky sands and boardwalk pier of the former is best enjoyed in the summer, while the latter is laced with modernist architecture.

Meanwhile a hydrofoil or ferry can whizz you across to the thin, curling finger of the Hel Peninsula. It’s not just impressive for its quaint fishing villages, but also that it’s never wider than 500m. 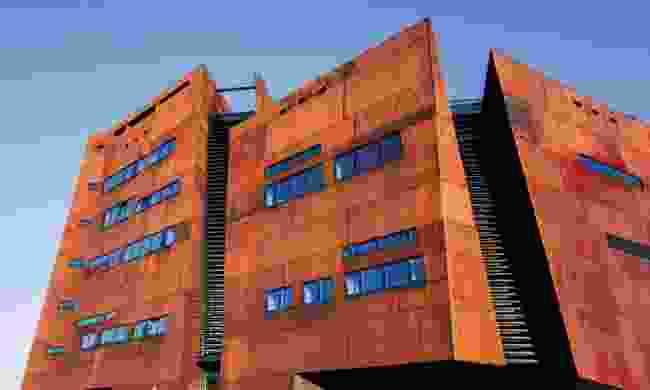 Best viewpoints: The huge red-brick presence of St Mary’s Church is worth seeing for its size alone, but if you’re feeling energetic, the 402 steps up its tower (78m) serves up widescreen views of its fine Old Town – well worth the effort. The sightseeing level (50m) of the Main Town Hall tower peers over Ulica Djuga (Long Lane) and Dlugi Targ – which both once served as the city’s Royal Way, one of three historic parade routes for Poland’s monarchs.

Health issues: None to speak of, but it’s best to make sure your European Health Insurance Card is up to date.

Recommended guidebooks: Both the Lonely Planet (2016) and Rough Guides (new edition due 2018) Poland guidebooks are worth investing in.

Web resources: The official city website offers comprehensive info on its highlights, while guide.trojmiasto.pl is a good source for the wider Tri-City (Gdańsk, Sopot and Gdynia).

Climate: Resting on the banks of the Baltic Sea, Gdańsk tends to have mild summers (average high 21°C), but its proximity to a wind-whipped coastline means winters are often bracing and below freezing (lows -3°C). Spring and autumn are pleasant and without the crowds. It is warm enough to explore the outdoors, too.