‘Phuket’ conjures different images to different folks. To some it’s a luxurious holiday destination of palm-tree-white-sand clichés. Those with a different perspective might think of ping-pong girls, seedy ex-pats and Patong’s Bangla Road. To yachties it’s a useful destination, a great base from which to start a season sailing around the islands, or to begin the long voyage westwards across the Indian Ocean. We had already crossed from the Maldives to get here, so it seemed churlish to head straight back without exploring South East Asia a little.

We were almost ready to leave Yacht Haven marina, but still needed a couple of days to provision SY Esper and make small last-minute repairs. So while we waited for some talented local workers to finish a couple of jobs, we hired a car to pick up fresh food and basic necessities, you know the sort of thing: a kilo of passion fruit for £1, mangoes in various stages of ripeness for 5p each, several slabs of Leo beer etc.

We had already explored inland and along the coast in southern Phuket so this was our opportunity to look around the north: specifically, we wondered what Nai Yang was like.  It seemed to be the go-to place for marina staff and visiting superyacht crew.

“It’s only 20 minutes away by taxi,” was often repeated. But as our new friends seemed to go there just as I was going to bed and would come back wasted the next day, I hadn’t felt the need to join them.

The drive down the narrow road which hugs the periphery of the airport is challenging. Only just wide enough for two cars, with a deep gulley on one side and a concrete wall on the other, it takes grit and guts to tackle on-coming buses. But the reward when you reach the T junction at the end and turn left is a pretty, secluded bay.

Turn right and you are in the shade of Sirinath Marine National Park, whose perimeter includes one of Phuket’s gentler and prettier rain forests as well as the reef it overlooks. A few hours hiking or cycling underneath the canopy is a peaceful, uncrowded way to spend the day. 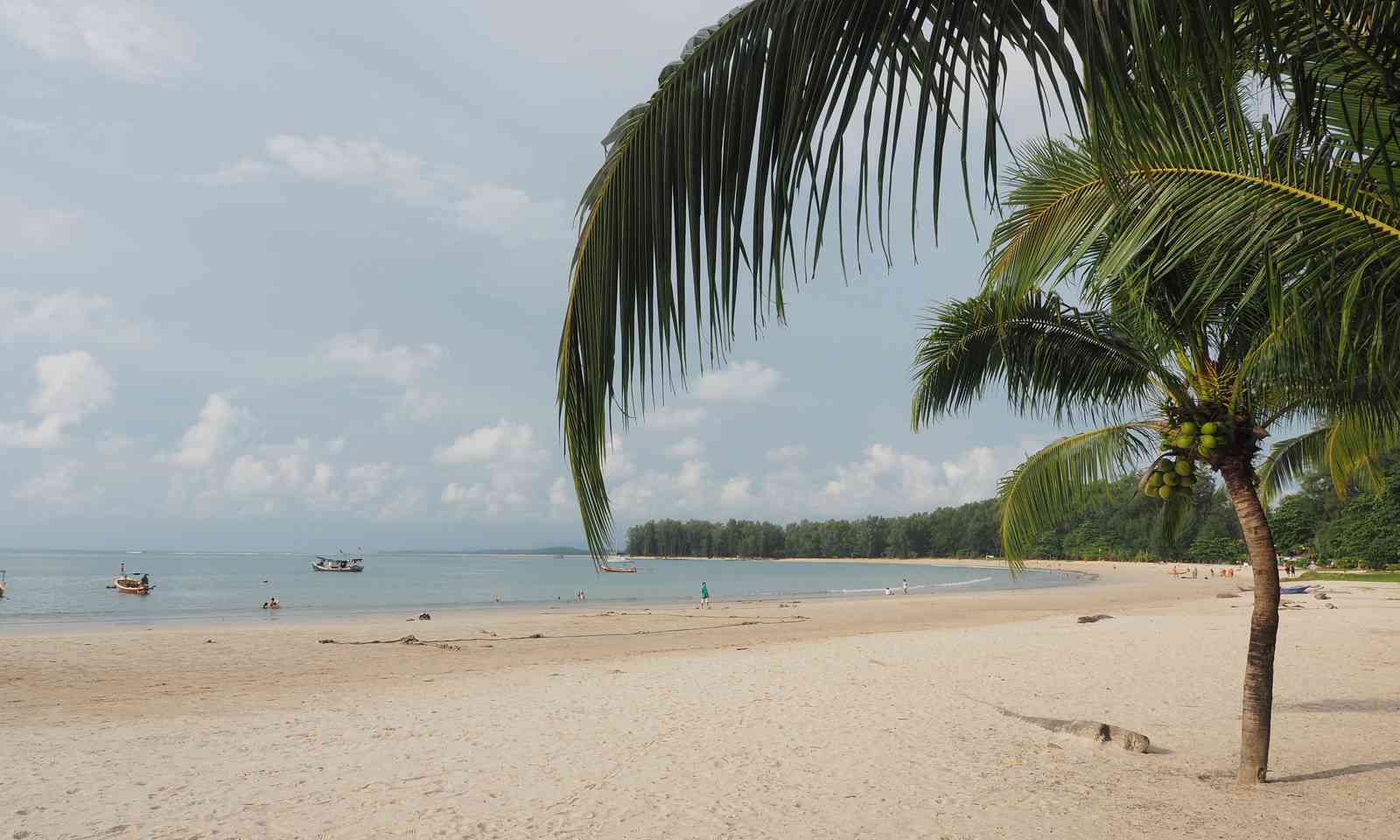 Nai Yang’s beach is fringed with casuarina trees, beneath which local families picnic under dappled light on soft sand. Behind the trees is a single-track road where a sprinkling of bars, restaurants, shops and rooms-to-rent flourish. Beyond the road is the luxury resort of Indigo Pearl. If you wait around you may catch an occasional startled 5-star guest venture through one of the guarded gates in the stonewall surrounding its compound.

We were told that prior to the military coup in 2014 unlicensed hawkers and market stalls stretched onto the beach. But once the army was running things, these were all moved back behind the road, or told to shut up shop, unless the owners obtained a license to trade. Bad for local people; better for the environment.

From a sailor’s perspective the bay seemed to be ideal, there was protection from the prevailing north east wind, good depth and a sandy bottom, meaning plenty of room to anchor. Looking at the navigation charts it seemed the park’s coral reef was worth a look – there were people snorkelling out there. We plotted where we would drop the hook when we eventually sailed this way.

Nai Yang is only five minutes from the airport, which is possibly why it tends to be neglected as a destination. Most holidaymakers jump in buses and taxis when they get off the plane and head further afield. This is a shame for them, but good for local Thai people and yachties who have the place virtually to themselves. 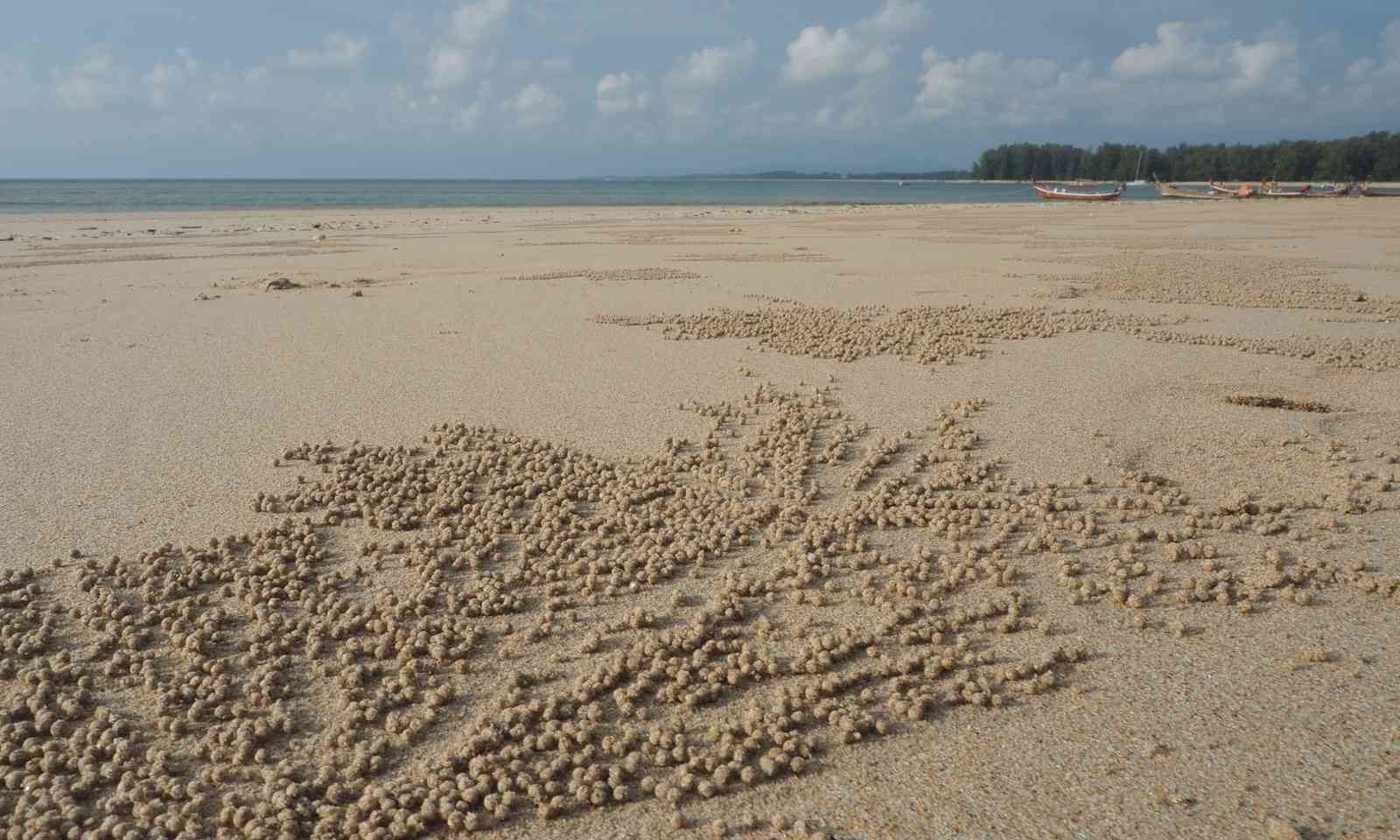 We walked along the beach as the tide was going out. Thousands of sand crabs, burrowing into their holes, created explosive patterns mimicking palm tree fronds and sky-rocket fireworks. Shells, coral, tumbled sea-timber and the occasional ripe fish carcass mingled with plastic water bottles at the water’s edge.

We have visited Nai Yang a few times since, and while the night life is particularly fun and friendly – try Boss Bar or Wat’s Bar – it is dusk which make this a stand-out place for us. There is nearly always a good sunset from Phuket’s east coast as the sun dips below the ocean somewhere beyond Sumatra, but none have yet compared to those we have seen from Nai Yang.