Sharing space with whales. Hanging with sharks. Hugs from a manatee. These encounters with marine creatures provide the biggest thrills in the seven seas 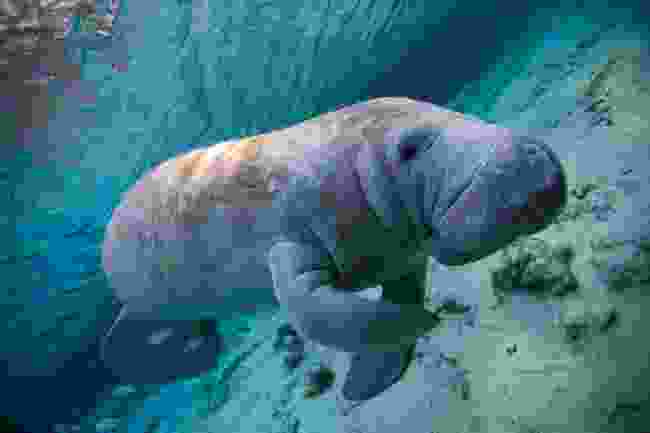 Winter in Florida brings not just waves of retirees but also wildlife-lovers hoping to share a warm bath with a mermaid. In Crystal River National Wildlife Refuge, the water temperature stays a consistent 22°C year-round – just how American manatees like it. Hundreds of these rotund marine mammals gather in the refuge’s clear, shallow waters between November and April, numbers peaking in midwinter. And they seem to enjoy company: slip into the water, mask and snorkel in place, and within minutes you’ll likely be greeted by a friendly face. With their whiskered chops, half-tonne heft and leathery backs cloaked in algae, it’s hard to imagine how sailors of old mistook 3m-long manatees for mermaids. But though they resemble particularly jowly elephant seals, their charming personalities more than make up for aesthetic shortcomings. When not resting or grazing on sea grass, these curious creatures often huddle up against swimmers – or even embrace them in a warm hug. 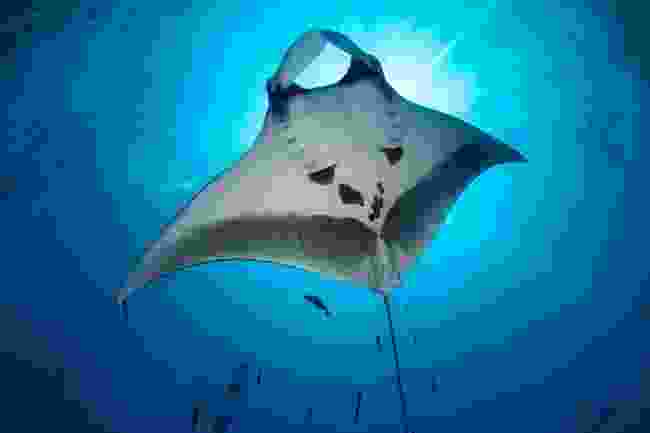 So-called ‘devil fish’ come in two sizes: huge and colossal. When one looms through the brine – with a ‘wing’ span up to 7m, and horn-like cephalic lobes lending it a diabolical appearance – it’s easy to understand how that infernal nickname arose. But dive or snorkel with these filter-feeding leviathans and fear is replaced with awe and wonder. The grace with which mantas ‘fly’ underwater is astonishing, heightened when they school and breach in acrobatic displays. Consider, too, that these colossal rays have the largest brains of any fish – they appear to be self-aware, able to learn and communicate. One of the best places to experience this spectacle is on Ningaloo Reef, Western Australia. A resident population of the smaller (but still huge, growing to over 4m wide) reef species can be reliably seen near Coral Bay, offering fabulous snorkelling and diving opportunities. Farther south, dive trips from Exmouth commonly meet reef mantas between May and September – and, when seeking whale sharks on the outer reef, sometimes encounter the enormous but endangered oceanic species at cleaning stations. 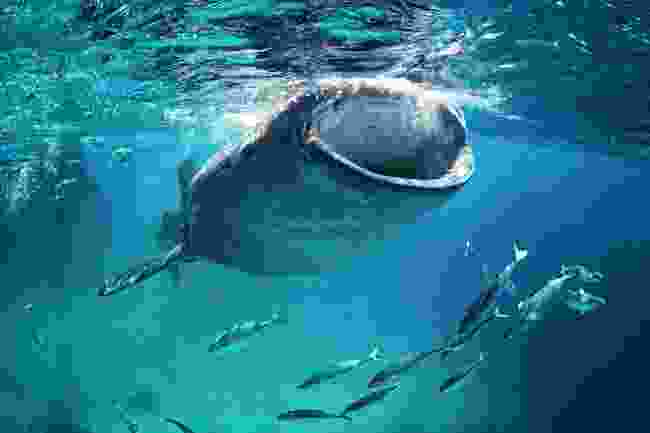 Most of us will never get to soar among galaxies. You’ll find the next best thing beneath the waves of south-east Luzon, where constellations shimmer amid the cobalt blue. Each nebula is a complex nexus of gleaming spots adorning the blue-grey skin of a whale shark – and each is as unique as a fingerprint. The world’s biggest fish is around the same size as a London bus – typically over 10m long and 20 tonnes – but you’d be very lucky indeed if three huge ocean wanderers came along at once. These beautiful behemoths are endangered, their populations ravaged by long years of hunting, and as mysterious as they are rare. They migrate over vast distances – one was tracked across a 20,000km journey – but where they go, and why, is still little understood. They give birth to live pups, though this act has never been witnessed. And they periodically gather in large numbers in a few favoured feeding spots. The Philippines is one such magnet, home to the second-largest population on the planet. From November to May these gentle giants – known locally as butanding – cruise the waters off Donsol, hoovering up dense aggregations of plankton. Here, interactions are carefully regulated; the creatures are not fed, and BIOs (Butanding Interaction Officers) scan the waters for sharks as well as ensuring snorkellers abide by the rules of engagement – stay at least 3m away, don’t block their path, and so on. (Whale shark swims at Pintuyan, Southern Leyte, are similarly regulated). There’s nothing formal about an underwater encounter, though – and finning alongside a spangled leviathan is a truly stellar experience.

Kayak with killer whales in the Johnstone Strait, British Columbia 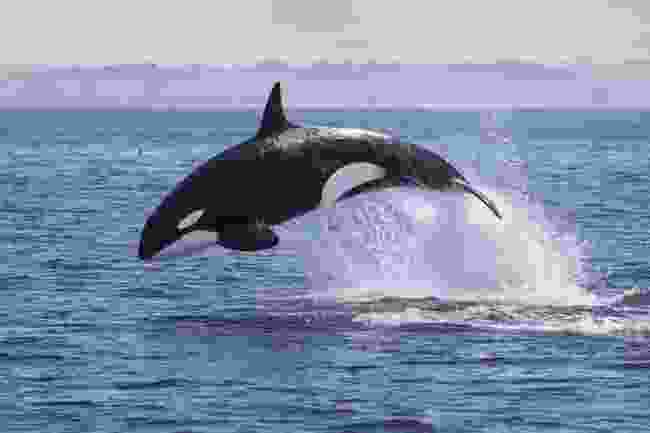 If you remember David Attenborough-narrated footage of orca launching onto a Patagonian beach to snatch sea-lion pups, or reports of killer whales savaging great white sharks, you might feel a tad nervous about taking to the water alongside a pod. Yet that fearsome moniker is misleading – a scrambled version of ‘whale killer’, it derives from historical accounts of attacks on larger cetaceans; no fatal attacks on humans have ever been documented. The 200 or so orca of Johnstone Strait, fringing Vancouver Island’s northern shore, are about as cute and cuddly as 8m-long predators can be. With a taste for salmon and a penchant for rubbing their bellies on the pebble beaches at Robson Bight, members of the world’s largest resident pod, which return here each summer between July and September, are playful, even musical – hydrophones reveal their lilting submarine songs. Camps along the shoreline provide bases for kayaking trips along the straight – watch for vaporous geysers spouting from the brine, betraying the arrival of these magnificent mammals. Keep an eye out for porpoises, seals, humpbacks and bears on the shore, too.

Chat with Atlantic spotted dolphins in the Bahamas 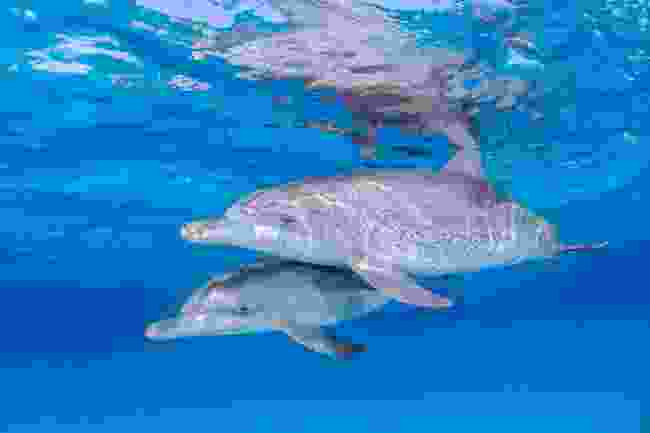 What do dolphins talk about? It’s a conundrum that has long intrigued biologists as well as those travellers fortunate enough to listen to these intelligent creatures’ clicks, squeaks, buzzes and whistles in the wild. Arguably the best place to join a cetacean conversation is North Bimini, in the warm, relatively sheltered seas between Miami and the main arc of the Bahamas. Unlike canned encounters in the Caribbean and elsewhere, the Atlantic spotted dolphins cruising these clear waters aren’t fed or trained – if they make an appearance, it’s on their whim alone. Free-dive to the sandy sea floor here and you’ve a good chance of attracting a pod – and there’s nothing like coming mask to mischievously grinning beak with one of these curious creatures. If they hang around to play, even better: growing over 2m long, they’re astonishingly lithe and agile, porpoising in boat bow-waves and corkscrewing around snorkellers.

Snorkel with basking sharks in the Hebrides, Scotland 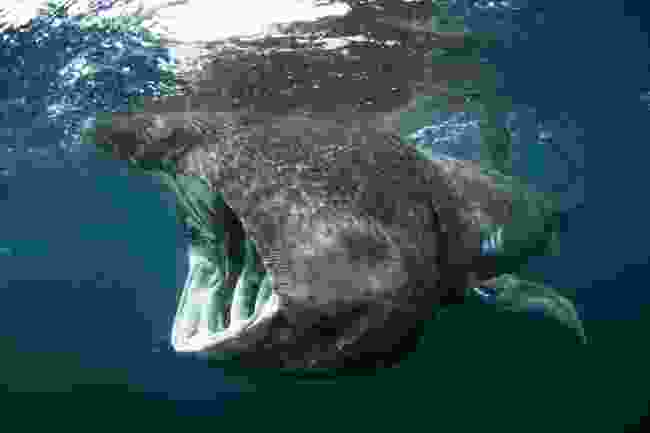 When a 1m-tall dorsal fin scythes through the waves towards you, heart tends to leap into mouth. Fortunately, unless you’re plankton, you’re safe from the predatory attentions of a basking shark – although if this leviathan sets course for you, it’s advisable to get out of the way: Britain’s biggest fish grows over 10m long and weighs up to 6 tonnes. From late spring to early autumn, the waters off Scotland’s Western Isles lay on a filter-feeders’ feast: profuse plankton blooms attract hundreds of migratory sharks to feed and breed. Join a shark-watching boat trip off Mull or Coll, and don a thick wetsuit to snorkel alongside them – staying clear of that gaping 1m-wide mouth. Use your swim to contribute to conservation research into these endangered creatures, using markings and scars on those huge dorsal fins to identify individual fish and record sightings (sharktrust.org/basking-shark-project). Sharks of all species need our help: an estimated 100 million are killed by humans each year to supply fins for the soup considered a delicacy in parts of Asia. 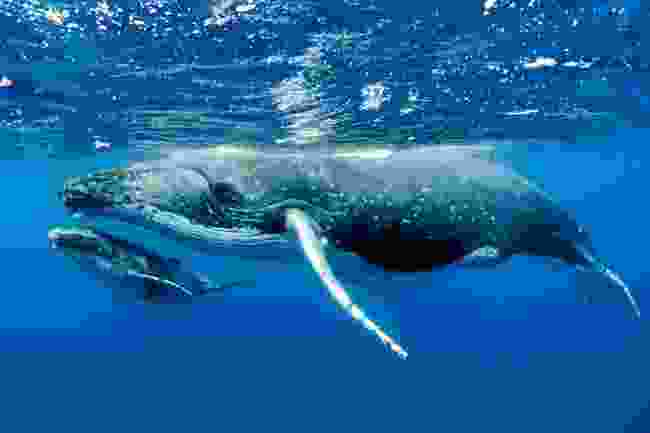 The most powerful songs win the most lovers. But tastes vary, and what sounds sexy in one place won’t hit the right note in others – a fact as true for humpback whales as it is for humans. ‘Dialects’ vary between populations of these charismatic cetaceans – so you might expect songs you hear in the Caribbean to resound with a distinctly sultry, tropical tone. Having spent winter fattening up in the nutrient-rich feeding grounds off New England and eastern Canada, thousands of these massive migrating crooners arrive in the Caribbean between January and April to breed and calf. Discover the haunting melodies of North Atlantic humpbacks for yourself in the waters of the Dominican Republic’s Marine Mammal Sanctuary, spanning nearly 52,000 sq km. For a visual spectacle, join a whale-watching cruise into Samaná Bay to watch acrobatic displays of breaching and tail-lobbing – pick a boat with a hydrophone to absorb the males’ complex vocalisations. And for a more immersive experience, join a liveaboard vessel sailing some 130km north to Silver Bank – here you can snorkel amid these soulful cetaceans as their soaring songs wash over you.

Dive with sperm whales in the Azores 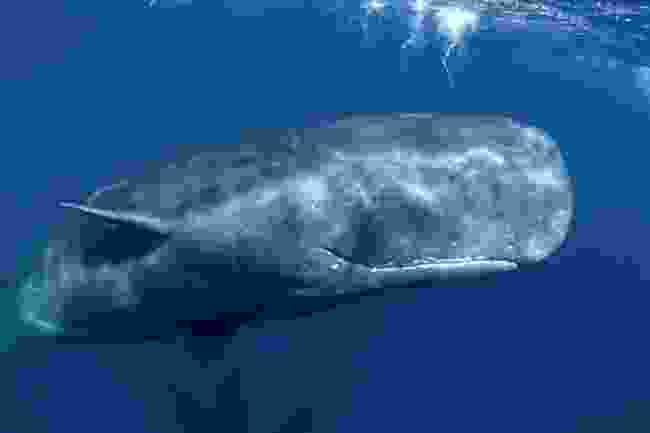 Don’t try to match a sperm whale in a diving contest – nor a seafood-eating challenge. The planet’s largest toothed predator dives over 2km into sunless depths to hunt squid, holding its breath for up to two hours and snaffling a tonne of molluscs, crustaceans and fish each day. You should, though, leap at the chance to swim alongside one – and the Atlantic archipelago of the Azores is one of the best places to enjoy an encounter. On a whale-watching trip between April and September, you might spot any number of cetaceans: mighty blue, fin and humpbacks migrate through in spring, while dolphins, orca and pilot whales are resident year-round, along with those blunt-headed, torpedo-shaped sperm whales. Tank up for a scuba dive with a pod to better understand this gargantuan predator’s behaviour. You might see how they rub against one another to slough off dead skin. You could witness a protective mother helping her calf at the surface. And you might feel the powerful vibration of a sperm whale’s click, used for echolocation and, possibly, communication.

Fin alongside turtles in the Maldives 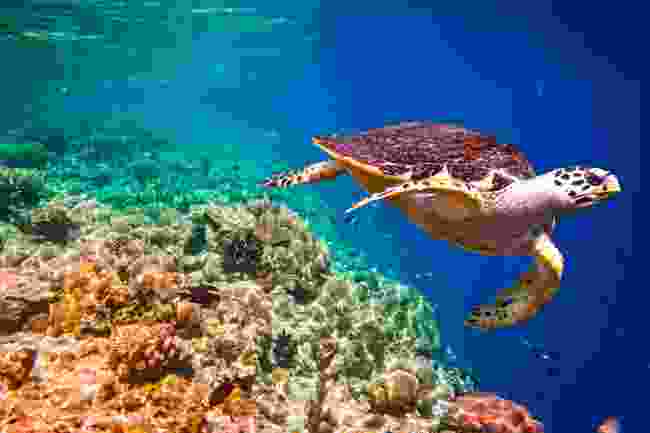 There’s a serene sagacity in the eyes of a sea turtle. Perhaps that reflects the vital role that these venerable creatures have played in maintaining the health of the world’s oceans for over 100 million years. As graceful underwater as they are clumsy and lumbering on land, these ancient reptiles are mesmerising when encountered on a snorkelling or diving expedition. Five of the world’s seven species swim in the warm waters of the Maldives, with hawksbill regularly spotted munching sea sponges along reef edges in areas such as Addu Atoll, and green turtles grazing seagrasses in Lhaviyani Atoll. Various conservation projects research and tackle the impacts of historic hunting and fisheries bycatch on these and other endangered species. Throughout the archipelago, divers are rewarded with dazzling reef fish, a host of sharks (including whale sharks) and huge manta rays as well as brushes with turtles. Choose sites by season: visit the western sides of atolls from May to November, eastern parts between December and April.

And now for something completely different… 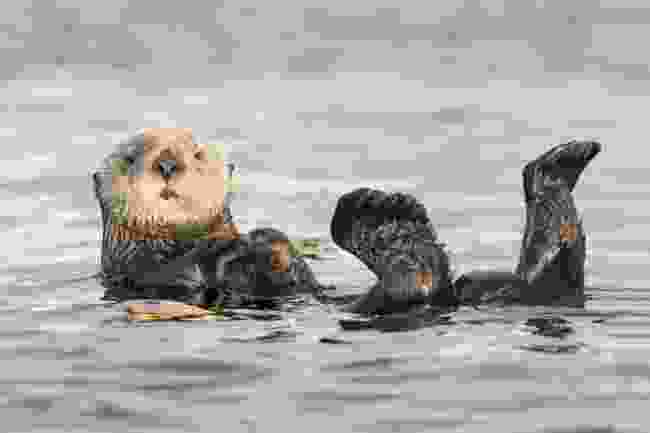 Kayak with sea otters in Monterey Bay, California Adorable but endangered, the sea otter seems relaxed enough in Monterey, where you might spot one floating on its back, nursing a cub or prising open shellfish alongside Fisherman’s Wharf or Cannery Row. Better still, kayak out into the bay and visit rafts of otters, keeping an eye out for sea lions, harbour seals and dolphins.

Swim with sting-less jellyfish in Palau Head to Ongeim’l Tketau (Jellyfish Lake) on the island of Eil Malk to be surrounded by hundreds of thousands of golden jellyfish on their daily migration. Swimming in the lake was prohibited for several years after the cnidarian population plummeted, but then it restarted – check locally for the latest updates.

Board with belugas in Churchill, Manitoba Each July and August, thousands of ‘sea canaries’ – renowned for their extravagant vocalisations – gather at the mouth of the Churchill River to calf. Zodiac tours offer encounters, but for a more intimate experience, grab a paddle and then kayak or SUP among them.

Snorkel among sardines, Philippines The submarine ballet of countless millions of silvery sardines is akin to a starling murmuration – a writhing, sinuous display. Don a mask, snorkel and fins at Moalboal, south-west Cebu island, to join the shimmering baitball.

SUP through stars, Tobago They might be tiny, but dinoflagellates put on a galactic show. Paddle across Bon Accord Lagoon on a clear night at the new moon and you’ll stir up constellations of these microscopic marine plankton set the sea aflame with a blue-ish glow.