Pilgrims completing the Christian pilgrimage trail known as Camino de Santiago won’t just finish with a few blisters on their feet – in 2021 they can expect to be forgiven for their sins, too.

Camino de Santiago – or the Ways of St James – refers to a network of interconnected hiking routes spread over 1,500km. Each path varies in length depending on whether it is started from within Spain – in Valencia or Malaga for example – or from another country; trails from Portugal, France and Switzerland are also popular. But to receive a certificate at the end a pilgrim must hike at least 100km of the UNESCO World Heritage Site.

While the starting point varies, the finish is always the same, as the trek culminates at the tomb of Saint James in Santiago Cathedral. The cathedral is a highlight for visitors to the city of Santiago de Compostela in the region of Galicia in northwestern Spain.

According to the Bible's New Testament, St James was one of 12 apostles – Jesus’s most dedicated followers. He is also the patron saint of Spain. 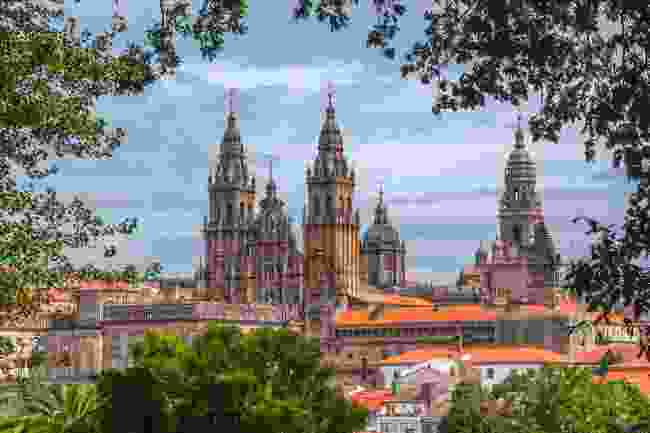 St James’ Day is celebrated on 25 July each year. In the 10 days leading up to the big day, Santiago hosts traditional dances, street performances, light shows and outdoor concerts.

During a Holy Year, pilgrims can expect special celebrations such as exhibitions, talks and film screenings which take place in and around Santiago and in communities along the various pilgrimage routes.

A back door in Santiago Cathedral, known as the Holy Door, is also opened during a Holy Year so pilgrims can enter through it to descend to St James’ tomb. Pilgrims pray during Mass and attend a confession in a ceremony known as plenary indulgence, during which they are forgiven for their sins. Plenary indulgence is only granted during a Holy Year.