6 of the best ways to see bears in the wild

You can see bears - brown, black, grizzly and polar - in a number of different, and slightly unusual, ways. All are equally thrilling. Phoebe Smith shares the best ways to try bear watching for yourself...

The children’s nursery rhyme may talk of a ‘big surprise’ when walking in the woods and coming across bears, but to make sure you have a much smoother encounter, it's wise to plan how to get close without worrying you or - more importantly - them.

Here are the best ways to see bears in the wild... 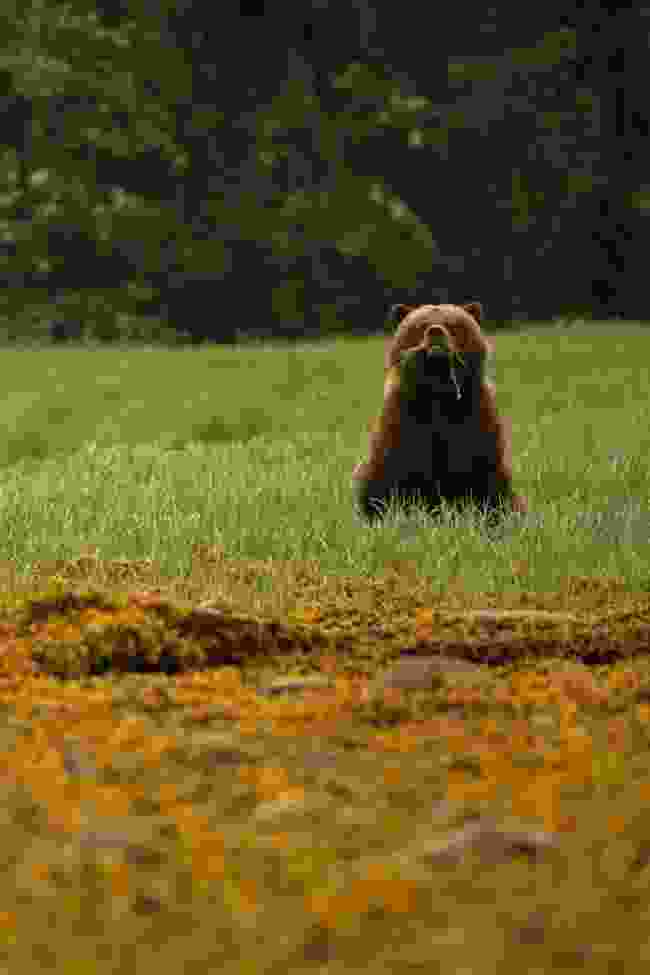 Canada’s Khutzeymateen Sanctuary in British Columbia is the northernmost site of its kind in North America.

Here, only three boats are granted permits to be able to venture inside the tidal channels every single year and the season is short – with the end of May and early June being the prime months.

You can’t step foot on the land, but rather watch the grizzlies from small boats that can access prime bear habitat when the tide is high each day.

The good news is that at this time of the year the bears are right on the shoreline looking for clams in the sand or feasting on the sea grass aka sedge.

They are also ‘in the mood’ after a long hibernation so you’ll likely see lots of courting behaviour and new bears being made in front of your eyes. 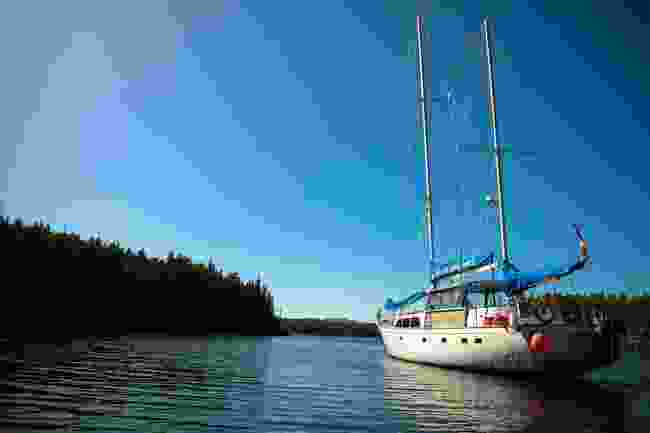 How was Phoebe's Khutzeymateen experience? 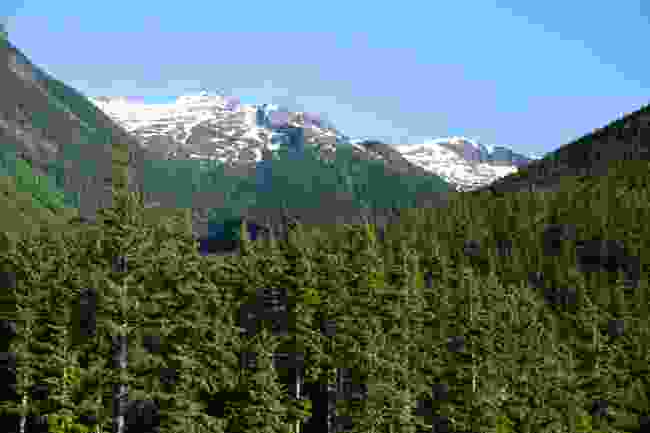 It may seem like an odd prospect to take e-bikes into bear territory, but by doing so in the Bella Coola Valley, you can access purposefully-designed constructed viewing platforms quickly. Most importantly, you can do so in silence, and not to disturb the wildlife.

This part of the country – the Great Bear Rainforest – is also home to the Kermode or spirit bear, a rare subspecies of the American black bear that appears almost white and is a striking sight as it moves through the darkened forest.

Best time to spot one is in autumn (September and October) when the need to feast on fish in the fast-flowing rivers, pre-hibernation, makes them bolder and easier to see. 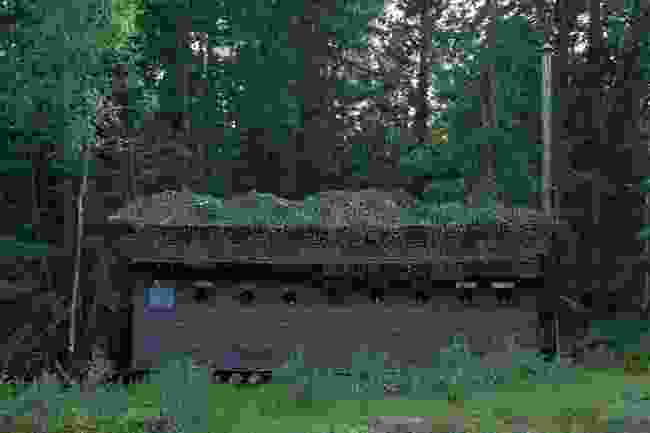 Once used by hunters, bear hides now offer the perfect place from which to capture a prize-winning photograph of a wild bear.

In the northern forests of Bollnäs, Sweden, two hours by train from Stockholm, you can not only go and visit one in the day, but local company Wild Sweden also allows you to spend an entire evening and night there, too.

You’ll be in position to get your shot at both dusk and dawn – prime time – of one of the native European brown bears. Equipped with blankets (you’ll need them), holes for cameras and spotting scopes, you'll be so immersed in the native forest and have the best chance of an encounter.

Best time to go is the summer before it gets too cold and where daylight is at its longest. 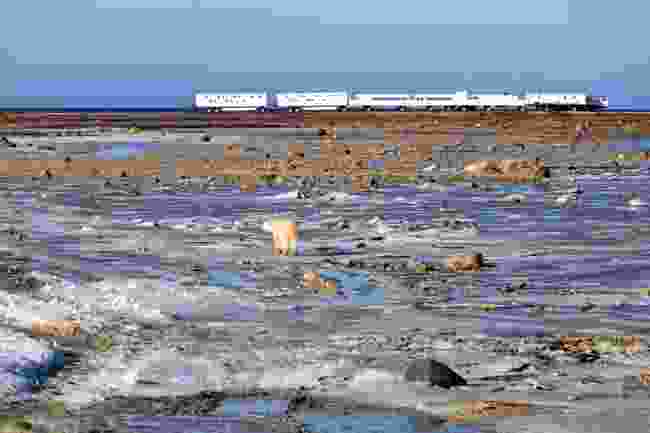 A polar bear roams near the Tundra Buggy Lodge (Shutterstock)

If you want your bears of the polar variety then you can’t get a more guaranteed encounter than heading to Churchill in the Canadian province of Manitoba.

Here, you take special all-terrain vehicles across the Arctic tundra that offer viewing platforms high enough to view the polar bears in safety.

Watch in awe with cameras in hand as these huge carnivores (for whom – unlike other bear species – you are definitely on the menu) approach you and seem to even stare down your lens as you pass by.

Better yet there’s even a Tundra Buggy Lodge, just outside the town. So, you'll be sleeping in prime bear territory, and may often wake up with one right outside your window. 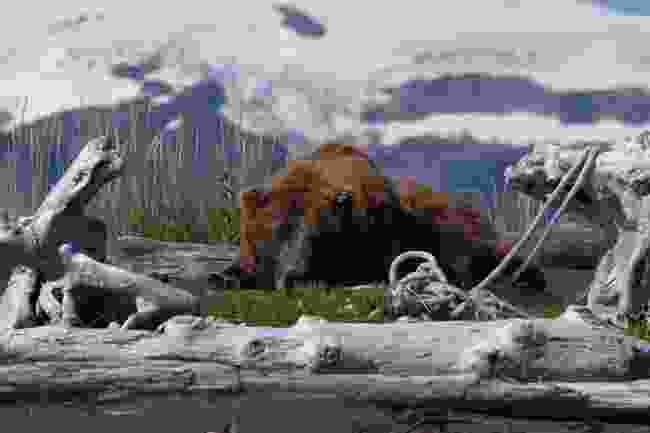 Back in 2012 at the Wanderlust World Guide Awards, a woman called Simyra Taback-Hlebechuk (aka the bear whisperer), scooped silver for her expert and relaxed way of communing with the huge grizzlies in Halo Bay, Alaska.

On stage in London, she talked about her fear at speaking in front of an audience, but then proceeded to show a photo of a mammoth female grizzly called Audrey – who she said she’d much rather stand in front of.

And so she does, every year, come June and July. Simyra takes guests from her camp out on foot to watch them, without fences, without guns and without any fear at all. The experience is life-changing. 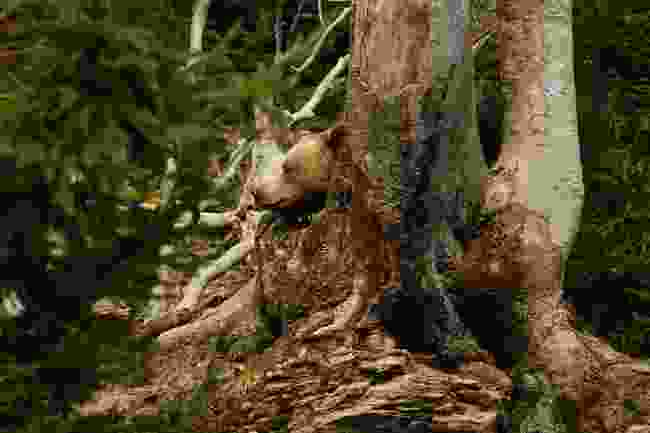 Not exactly the kind of 'bear hide' we're referring to. A brown bear tucked behind a tree in Finland (Shutterstock)

If the idea of spending the night in a communal bear hide with other bear watchers leaves you cold, then you could simply head to neighbouring Scandinavian bear stronghold – Finland.

Here, a company has just finished the construction of special bear hide cabins, equipped with infra-red binoculars, huge picture windows and microphones outside that you can turn on to enable you to listen to the world beyond your walls – without having to stand around in the cold.

So, jump in bed, and watch (and listen) to the bears strolling by for a wild, but really sort of mild, night out…

Pandas and beyond in Sichuan province

Is Estonia a good place to go bear tracking?