The 7 best walks in New Forest and Hampshire

Home to pretty villages, ancient woodlands, heath and salt marshes, New Forest and Hampshire offer some of the most diverse walks in England. You can even follow in the footsteps of Jane Austen... 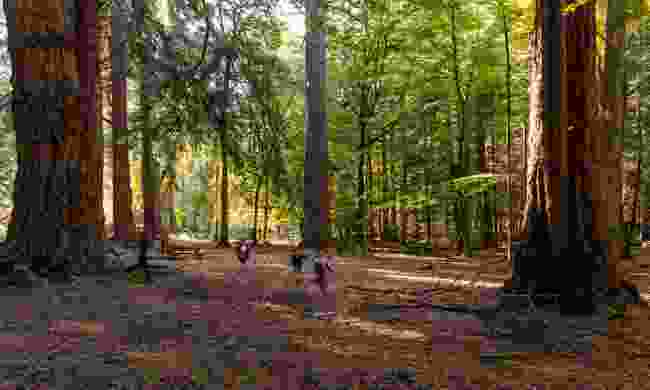 This short but sweet one and a half mile walk begins at the famous Rhinefield Ornamental Drive, near the Blackwater carpark, and is one of the most popular in the New Forest. A gentle and flat walk, it is suitable for most abilities and ages.

Much of the pathway weaves its way beneath the canopies of towering trees and is dappled with sunlight through much of the summer. When you’re finished, head over to the nearby Blackwater Arboretum Sensory Trail, famous for its rhododendrons, azaleas and towering sequoias, and home to a variety of trees from around the world. 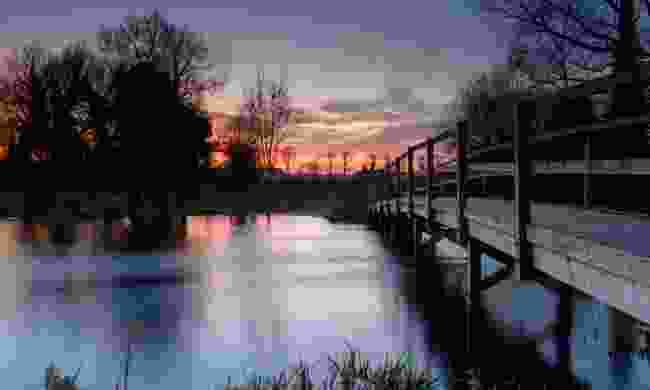 Starting beside the River Itchen in the centre of Winchester and ending near the River Avon at Salisbury Cathedral, Clarendon Way is a popular 26-mile walk that passes through the Clarendon Estate and beside the 12th century ruins of Clarendon Palace.

It also calls through the pretty villages of Pitton, The Winterslows and King’s Somborne, regarded as some of the loveliest in the country.

The route provides an incredible variety of scenery along the way, including river meadows, ancient woodlands and rolling downs offering far-ranging views. It is divided into four distinct sections which can be walked separately, or together in one long hike. 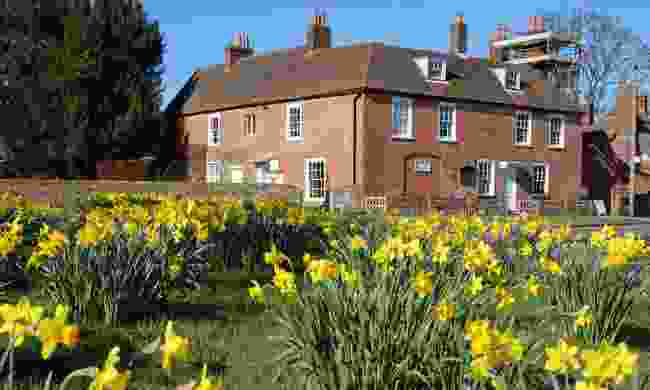 Follow in the footsteps of novelist Jane Austen and enjoy some of the loveliest vistas in the region on a trail that links Chawton village, where she lived, with Alton, the market town she often visited. The trail, of course, will take you to the house in Chawton where Jane lived and worked, as well as St Nicholas, the church where her family worshipped.

Much of the fun for Austen fans comes from seeking out the places she mentioned in her books and in the letters she wrote. There’s home of Mr. Newman, apothecary and surgeon, whom Jane visited with a friend in 1811 and afterwards wrote a humorous verse about. And the house of the Prowtings, who were friends of the Austen family and were mentioned many times in Jane’s letters.

The route is about one and a half miles long and easy to follow – just look for the markers bearing Jane’s distinctive silhouette. 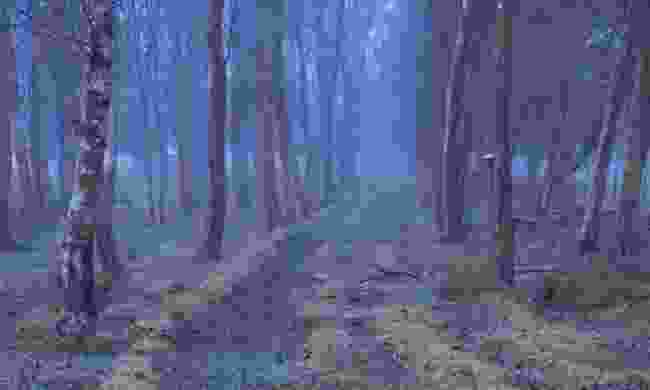 If it’s the New Forest’s famous wildlife you’re looking for, this walk just off the A35, is for you. Trundling through a variety of ancient and ornamental woodlands and open fields, you’re sure to come across grazing cattle, fallow deer and even some of the Forest’s famous ponies.

Once you’ve finished the three and a half mile trek, make sure to drop by the Old Station Tea House at Holmsley for their famous cream tea. What better way to reward yourself for all your good work? 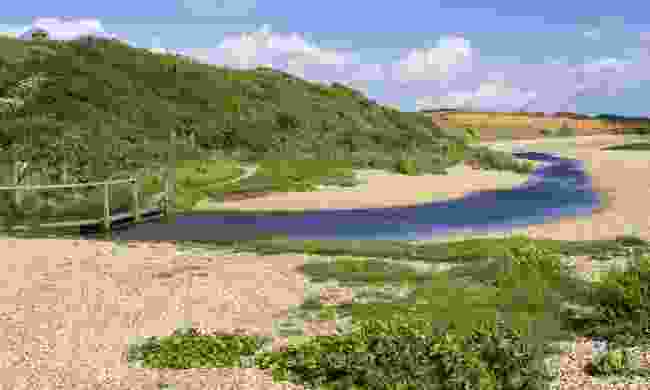 A remote stretch of the Solent Way (Shutterstock)

Arguably the most picturesque walk in Hampshire, the Solent Way is a 60-mile route stretching from Milford-on-Sea to Emsworth, at the top of Chichester Harbour. It is broken into eight sections and will take you through will take you through quaint fishing villages, yacht marinas, marshland and saltings. There’s even a submarine museum you can visit en route.

Summer is probably the best time to attempt the walk. There are plenty of pubs along the way where you can put up your feet, tuck into a hearty meal and enjoy a cold beer as the sunshine sparkles on the Solent. But a winter walk can be just as enjoyable, as the seas get rougher and the whole region feels altogether more rugged and remote. 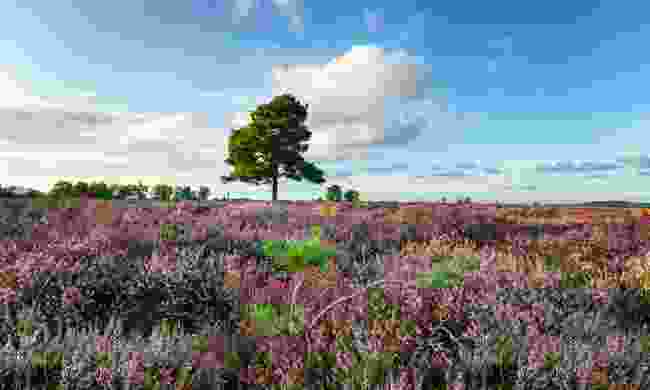 A carpet of purple heather in the New Forest (Shutterstock)

Lyndhurst is the self-proclaimed ‘capital of the New Forest’, a bustling town of pubs, cafes, galleries and museums. If you can manage to drag yourself away from its charms, this three and a half mile circular walk is the perfect introduction to the beautiful countryside that surrounds it.

The route follows a heathland trail and in the late summer the ground here is covered in a thick carpet of flowering heather. After passing a farm and campsite, you’ll come upon a series of magical forest glades, the perfect place for a picnic. From there a centuries-old track will lead you to the peaceful lanes lead at back of Lyndhurst, and then into the town. 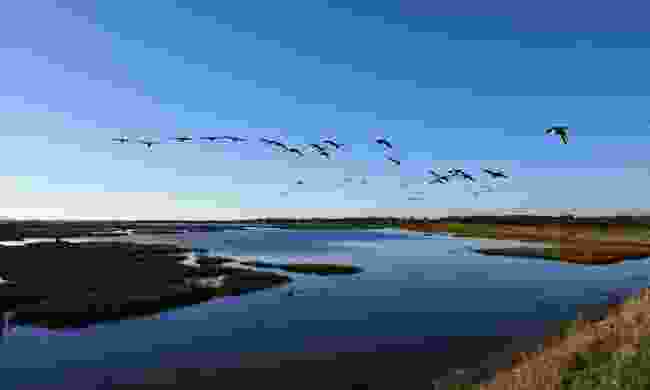 Brent geese in flight over Lymington and Keyhaven Marshes (Shutterstock)

There’s more to the New Forest than trees and this walk is a perfect introduction to the extensive coastline and marshes here. Bird lovers are in for a real treat. Large numbers of Brent geese seek refuge here in the winter, along with roosting dunlin, black-tailed godwit and grey plover. In summer, little terns, black-headed gulls, and cormorants feed here, as do birds of prey, including marsh harriers, peregrine falcons, and merlins.

The first part of this circular route follows the Solent Way, offering great views over salt marshes from the sea wall. Further in you’ll see Hurst Castle, the Isle of Wight and The Needles. The jetty is your turning point. Follow the markers along an ancient highway and a man-made lake and you are back where you started from. You'll have walked four miles, total.