7 of the best walks in Essex

Essex: underrated as a walking destination and full of surprises. Walk along tranquil riverbanks, creeks, and coastline. Amble through ancient forests and explore picturesque villages... 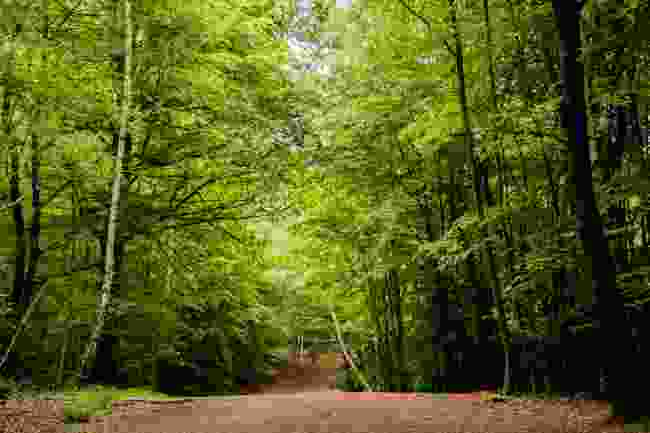 One of Britain’s oldest woodlands, the 4,000 acres of Epping Forest are criss-crossed with footpaths that stretch from Greater London to the market town of Epping in Essex. The diversity of trees is reflected in the names given to walks: the Lime, Chestnut, Hornbeam, Holly, Willow, and Beech trails.

This six-mile ramble follows the Oak Trail with its green-arrowed waymarkers. It’s a good choice in summer when the canopy of trees provides a welcome respite from the heat of the sun. Take time to stop; lean against an old-growth tree and listen to the sounds of the forest while enjoying a spot of al fresco dining.

Start at Theydon Bois Railway Station, where there’s also parking. Head north along Forest Drive into fields and along the edge of the Great Categories plantation before turning east to a bridge spanning the M25. Cross over and continue straight through fields to Ivy Chimneys Road, turning left. Take a right turn after a short distance to follow the Centenary Way into Epping Thicks.

Follow the thickly wooded forest road south, passing by Ambresbury Banks Iron Age Hillfort. Continue south along Green Ride before crossing the road of Coppice Row to follow the Ditches Ride. Loop around Birch Wood at the edge of Debden Green, then cross the deer sanctuary where the path intersects Coppice Row again. Continue north along the path, then turn right to return to Theydon Bois. 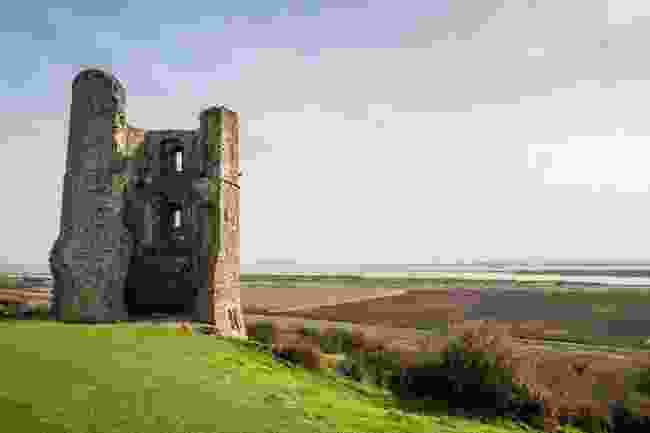 This seven-mile walk takes the rambler through woodland and meadow to the ruins of Hadleigh Castle with expansive views over the Thames Estuary. Dropping down to Leigh-on-Sea, follow the grassy pathway along Hadleigh Ray, an arm of the Thames Estuary, back to Benfleet.

From Benfleet Railway Station (with parking) cross High Street and walk up Station Road to the bend where a gate on the right leads into woodland. Follow the path southeast to continue along the bottom of Benfleet Downs and past the base of the Olympic Cycle Trails. Look out for a left turn that climbs to Hadleigh Castle.

At the top, take in the views, enjoy a picnic and explore the ruins before dropping down to Leigh-on-Sea. The Peterboat on the High Street serves excellent lunches. You can catch a train back to Benfleet, but it’s a shame to miss the estuary walk along Hadleigh Ray via Two Tree Island. Stop for a drink at Barge Gladys with views across to Benfleet Yacht Club on the other side of the creek. The station is a short distance from here.

3. From Heybridge Basin to Osea Island 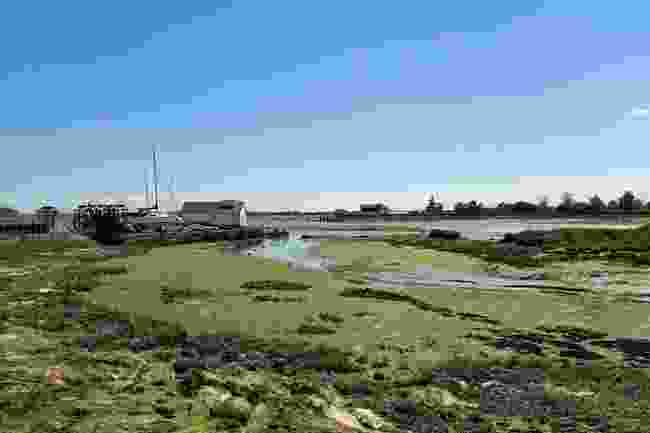 The six-mile waterside walk, east of Chelmsford, follows canal and river estuary through a landscape rich in wildlife. Come out of season to enjoy the skein-filled skies of overwintering Brent Geese and flocks of plovers, or in summer through to autumn for glimpses of common and grey seals.

Park at Daisy Meadow Car Park at Heybridge Basin and climb the steps to the canal. Turn left and follow the towpath along the Chelmer and Blackwater Navigation, lined with pleasure boats. Pass the locks, The Old Ship, The Jolly Sailor, and Tiptree Tea Room at The Lock – all options for waterside refreshments – and continue along the seawall, with views to Northey Island and Blackwater Sailing Club.

The coastal path curves around the saltmarshes then heads south-east. Follow the estuary as far as Decoy Point. At low tide, you can cross the one-mile causeway to Osea Island, home to overwintering Brent geese, plovers, and redshanks. Retrace your steps back to your starting point. 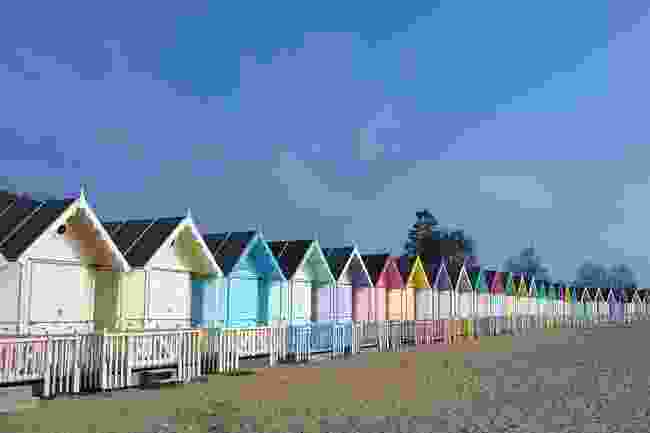 On the east side of Mersea Island (west of Clacton-on-Sea), seaside settlements with their oyster and shellfish restaurants give way to quiet marsh and farmland.

From Cudmore Grove Country Park, follow the three-and-a-half-mile clifftop walk in the footsteps of bison, bear, and wolf (where coastal erosion has revealed 300,000-year-old animal deposits) then country lanes back to the starting point.

Drive over to Mersea Island along the causeway road (not always accessible at high tide), where ’The Strood’ is allegedly haunted by a Roman Centurion. Continue to Cudmore Grove Country Park and park up. Follow the sign for the beach, turning left to continue along the clifftop path. Head east after the Tudor Blockhouse to follow Pyefleet Channel, looking out for common seals in the water.

Just before the third gate after Colchester Oyster Fishery, turn inland along the edge of a field, then woodland, to Shop Lane. Turn right to follow the country lane as it twists and turns before meeting East Road. The Dog and Pheasant pub on the corner is a good place to rest up and have lunch. From here follow East Road to Broman’s Lane and back to Cudmore Grove Country Park.

5. Wivenhoe to Hythe along the River Colne 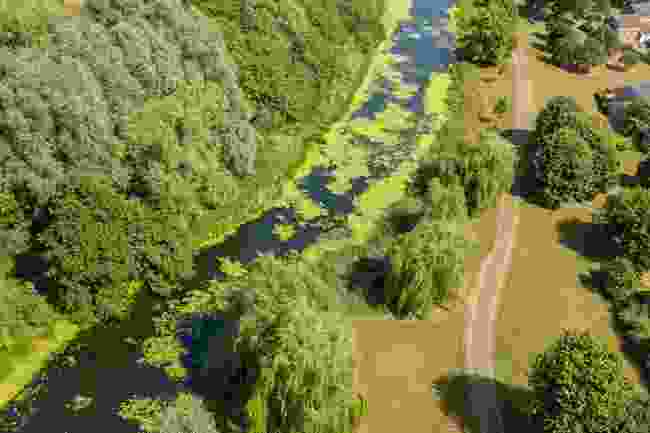 Riverside settlements, shored up sailing boats, reed marshes, woodland, and chic urban regeneration are all on offer on this four-mile walk along the Colne to Hythe.

Take the train to Wivenhoe Railway Station (with parking for those driving). Follow Old Ferry Road to the Ferry Marsh Trail, the waterfront houses of Rowhedge on the opposite bank of the River Colne rising out of the reedbeds. The riverside path then squeezes between the waterway and railway line, with Wivenhoe Woods Colne Nature Reserve on the hillside.

After a while, you will reach the urban sprawl of Hythe on the edge of Colchester. Follow the riverside pathway past university buildings, smart apartment, and office blocks (contrasting the more earthy peeling sailing vessels, factories, and industrial wasteland on the opposite bank). There are plenty of chain restaurants in the regenerated riverside zone.

For something more special, hop on a bus for the historic heart of Colchester before taking the train back to Wivenhoe, where you can enjoy a pint at The Rose and Crown on the Quay with overlooking the river. 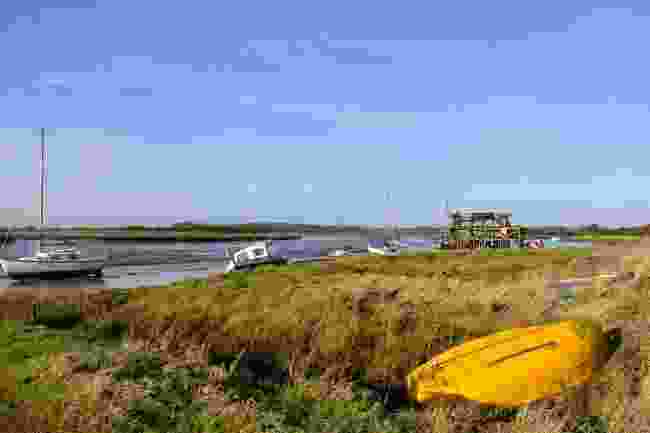 This three to four-mile walk (depending on your starting point) takes the rambler along the idyllic Alresford Creek (an arm of the Colne estuary river) to a rare surviving tidal mill at Thorrington. Bring a picnic and tune into the sights and sounds of the marshy inlet: the rustle of water reeds or the call of the oystercatcher. If you would like to see the working mill in action, plan your ramble for the last Sunday of the month during summer.

If arriving by train, follow Church Road and Fold Lane from Alresford Station to the creek. If travelling by car, there’s limited parking by the ruined St Peter’s Church on Fold Lane (beware, the road end beside the creek floods at high tide). Head east along Alresford Creek, keeping to the waterside.

The path loops around Sixpenny Brook before continuing along the salt marshes and mudflats to Thorrington Tide Mill. Turn right to cross the head of Mill Dam to the mill, which is powered twice daily by the incoming tide. The tall, pristine-white, and elegant wood-clad building, surrounded by marsh, meadow, and woodland, is one of bucolic loveliness.

Retrace your steps along the creek. You can either stick to the waterside or cut across meadows to the top of the tidal arm of the creek at Sixpenny Brook, skirting around Plumpton’s Farm and a series of flooded sand and gravel pits before hitting Fold Lane again. Turn right to return to St Peter’s Church.

7. Naze Tower and Nature Reserve on the North Sea coast 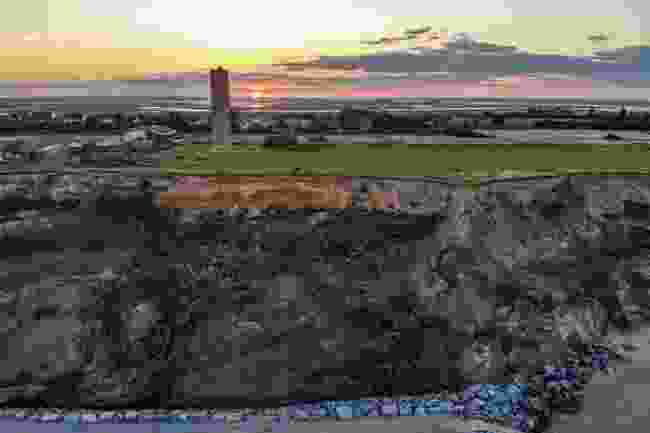 Southeast of the watery world surrounding Horsey Island - a maze of channels, creeks and islands - lies Naze Tower and Nature Reserve. Climb the spiral steps of the navigation tower to the viewing platform (summer only) with far-reaching views over the eroded coastline to the North Sea, before exploring the rest of the reserve. It’s a short but lovely mile-long walk through nature on the exposed ‘nose’ south of Harwich.

From Naze Car Park, follow the grassy path between Naze Links Café and the Essex Wildlife Trust’s Naze Centre to Naze Tower. 86ft in height, you can’t fail to be impressed by this 18th century monument. Head north through Naze Nature Reserve, a geological Site of Special Scientific Interest – one that’s shrinking in size every year due to cliff erosion.

From the Infantry Pillbox, a wartime defence, continue northbound to the seawall. Climb down to the shore to see the eroded cliffs from below and hunt for fossils on the beach. Turn left to walk along the beach to the end of the spit. Returning in the direction Walton-on-the Naze, look out for the steep path up to the Naze Centre (by the first groyne).

At high tide, when the beach is inaccessible, return by the clifftop path. Drop into the centre to find out more about the crumbling coastline and surrounding nature reserves teeming with wildlife. Stop off at the Links Cafe for a warming soup or drink – or head into Walton-on-the-Naze for more options.

For a longer (four-mile) walk, with a chance of spotting seals, turn left at the sea wall instead of dropping down to the beach, and follow Cormorant Creek, then Walton Channel as far as the old harbour. Head east to skirt the edge of Walton-on-the-Naze and on to Naze Park Road and Old Hall Lane – back to the car park.