Forget the big street art capitals. The artists in these cities and towns have more fascinating tales to tell. And it shows in their stunning work... 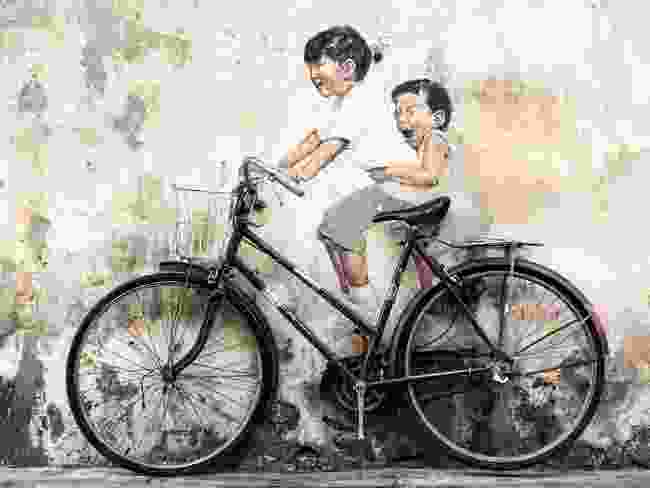 This colonial-era trading town in Malaysia became an unlikely hub for street art in South-East Asia when the local government commissioned Lithuanian artist, Ernest Zacharevic, to do a series of public paintings as part of the 2012 George Town Festival.

Using the the public buildings of central George Town as his canvas, and incorporating objects like bicycles, swings and the buildings' doors and windows, his whimsical works became an instant hit.

His most famous work, featuring a boy and a girl riding a bicycle on Lebuh Armenian (Armenian Street) has become the city’s top tourist attraction and the first stop for most visitors to the city. 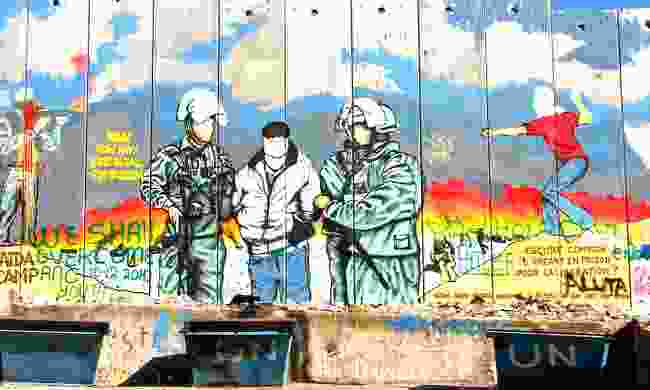 Graffiti on the barrier wall near Bethlehem (Dreamstime)

The West Bank Barrier Wall runs between Israel and Palestine like a scar, an ugly concrete barrier as oppressive as it is tall. Unsurprisingly, it has become a canvas for politically motivated graffiti artists to spread their message.

The work ranges from angry political slogans to colourful murals promoting love and hope. It was given legitimacy from street art royalty when the famous UK artist, Banksy, opened the Walled Off Hotel in the shadow of the barrier, each room decorated with politically inclined art works. 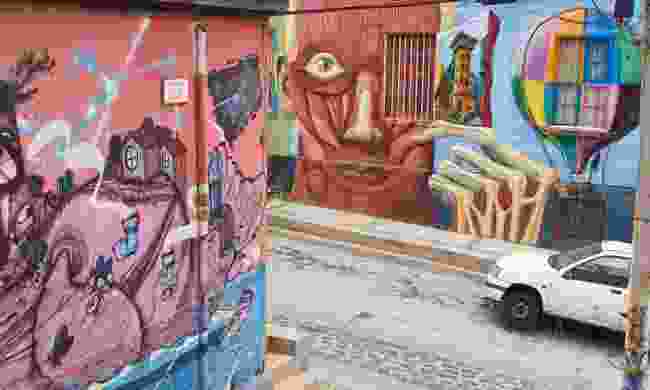 Regarded by many as the street art capital of the world, the narrow twisting streets of the city, rising up sharply from the port and spreading out over 43 hills, provide the perfect canvas for colourful murals.

Valparaiso’s chaotic history provided the inspiration. It’s bohemian population provided the artists. And when street art was legalised after the fall of the Pinochet dictatorship, the city bloomed.

For an overview of the city’s celebrated urban art scene, go on a free tour with Valpo Street Art Tours and then simply wander the cerros (hills).

There are 42 barrios to explore across the city, most notably the bohemian neighbourhoods of Cerro Alegre and Cerro Concepción. 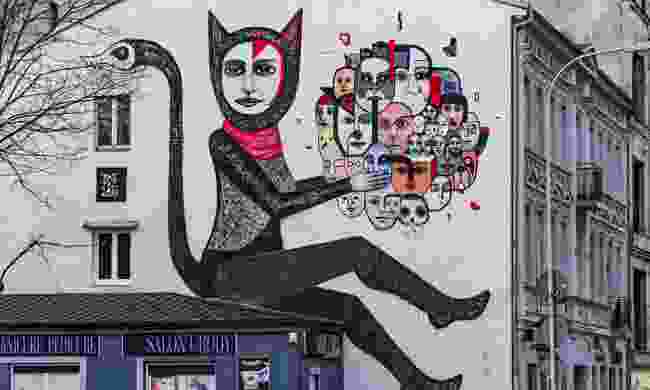 Bleak, grey and depressing, Lodz was just another neglected Polish city, struggling to come to grips with the new world order after the fall of the Berlin Wall.

Then, in 2009, the Urban Forms Foundation was created, encouraging street art in public places and turning the city into one of the premier street art capitals of the world.

Lodz is famous for its giant sized murals, many 10-storeys high, that add a blast of colour to the otherwise washed out city centre. The most famous are by Polish artists, Przemyslaw Blejzyk and Mateusz Gapski (collectively known as Etam), whose work often use themes and characters from Polish folklore. Stubborn and anti-authoritarian, the tiny commune of Orgosolo in the dark mountains of central Sardinia has a long and proud tradition of political street art. The first mural appeared in 1969, celebrating the town’s defeat of an Italian government plan to build a military base nearby. Now, there are over 150.

Most are painted in a simple Cubist style, and wandering through the narrow streets of Orgosolo is like walking through a history of revolution throughout the world. You'll spot murals celebrating uprisings in Vietnam, Cuba and Nicaragua.

There’s even one about the famous ‘tank man’ in Tiananmen Square, cleverly incorporating a local stop sign to emphasise his simple act of civil disobedience. 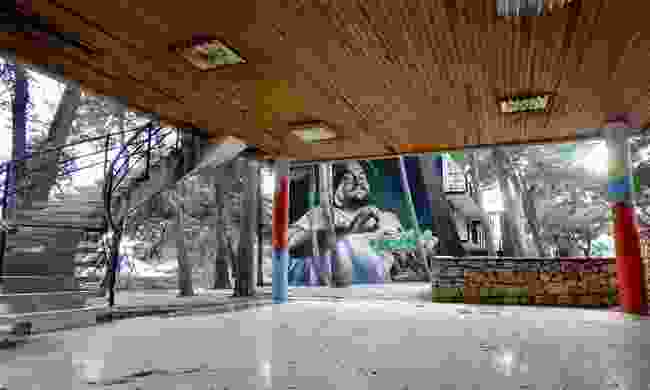 Each summer, the tiny town of Bol, on the Croatian island of Brac, turns over its abandoned buildings to young graffiti artists to show off their skill and network with other artists from across the region. Called Graffiti na Gradele, the festival has been going now for five years.

The two main sites are the Fabrika, an ex fish factory, and Bijela Kuća (aka The White House), an abandoned hotel. Silent for much of the year, the two buildings become a buzzing meeting place for the youth of these tiny islands and a hive of art and music. The resulting murals quickly become tourist attractions –  at least until the next festival. 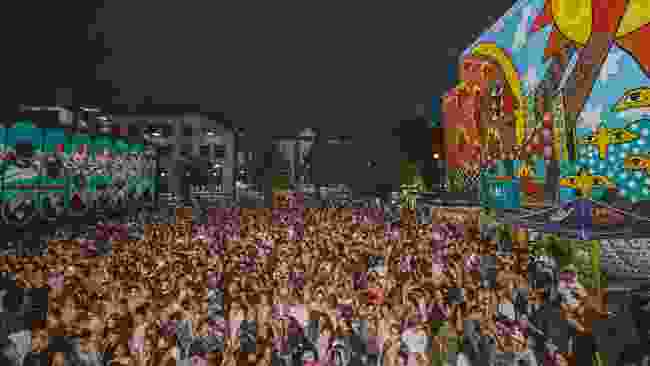 On a continent that isn’t exactly short of street art hot spots, Montreal has emerged as North America’s most exciting and influential street art capital. Saint-Laurent Boulevard, one of Montreal's busiest street, is literally an outdoor gallery, with lots of great work in Mount-Royal Avenue, Rosemont and the South West Borough, too.

It helps that the local government has been actively promoting street art since 1961, devoting 1% of its annual budget to the arts. But what has really put Montreal on the street art map is the annual Mural Festival, a giant, 10-day celebration of urban art every June.

Saint-Laurent Boulevard is transformed into an open air studio where local and international artists combine their talents to create compelling works. Featuring more than 80 artists from around the world, it is the biggest street art festival in North America. The street art in Bogside, the suburb of Derry that sits below the city walls, are regarded as the most famous political murals in Europe.

They reflect the city’s past and present political and religious divisions, pay homage to political leaders and martyrs from both at home and abroad, and act as a reminder of the troubles that afflicted this area not so long ago.

Tensions can still run high in the areas where most of the murals have been painted, so it is probably best to take one of the tours offered in the city. The tour guides are often locals who can give you added insight into the meanings of the murals and the stories behind them. 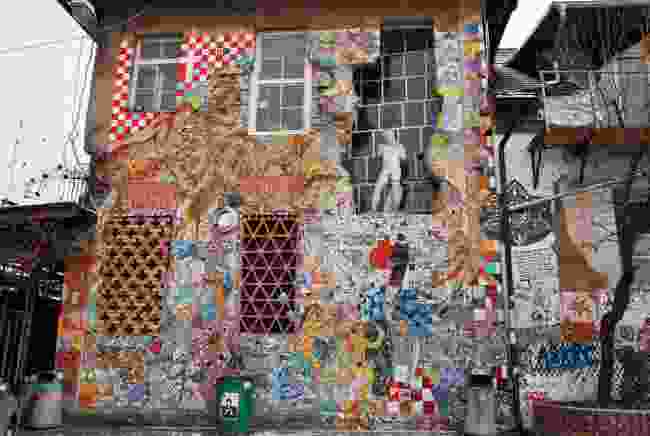 When the military barracks in Metelkova were abandoned after the break up of Yugoslavia in the 1990s, artists and activists moved in, creating an alternative community and transforming the bleak buildings into gloriously shambolic works of art.

Despite initial resistance from the local authorities – they were squatters, after all – they have been allowed to stay and a blind eye has been turned to their not-strictly-legal activities.

The result? A lively and colourful concentration of street art, bootleg bars and clubs and unlicensed meeting places, just outside the centre of Ljubljana. 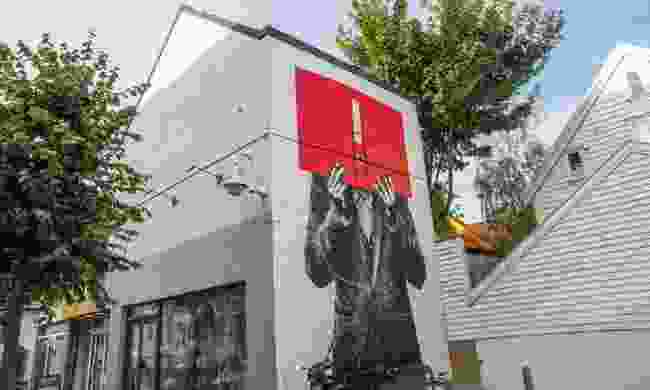 Every year, the residents of Stavanger turn over the walls of their homes and business to street artists as part of the city’s NuArt Festival.

It takes quite a leap of faith. They have no say in what the artists produce. And they have to agree to leave the artwork in place for at least a year. The success of the festival suggests that there have been very few complaints.

It helps that most of the art reflects local issues and encourages debate on matters that may have been otherwise swept under the carpet. One year, for example, the Scandic Stavanger City hotel was painted with a mural of a dissected whale spurting oil and blood. 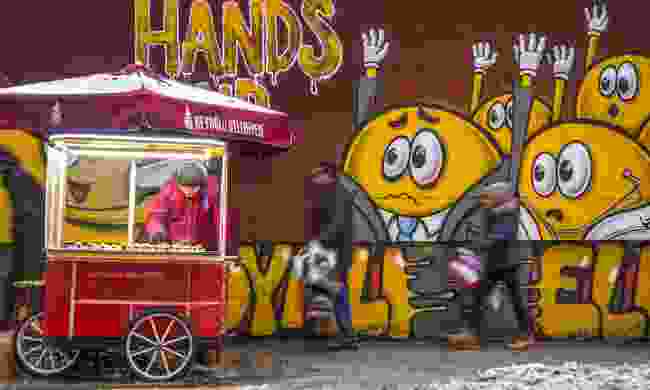 In a country where political dissidence can have serious repercussions, street art offers a rare opportunity to comment and protest. As a consequence, street art has boomed in Istanbul over the past couple of years, with provocative works appearing in progressive suburbs like Kadikoy, on the Asian side of the city.

One of the city’s most famous artists goes under the moniker No More Lies, an indication of the motivations behind this burgeoning scene.

The Annual Mural Istanbul festival has helped too, allowing local and international artists to apply their work onto the sides of buildings across the city. For street art fans, Istanbul is certainly a city to watch.