The best things to do and see in Sicily

This zesty Mediterranean island has an unrivalled collection of towering peaks, deep canyons and baroque cities. Unique to their environment and brimming with charisma, here are the best spots... 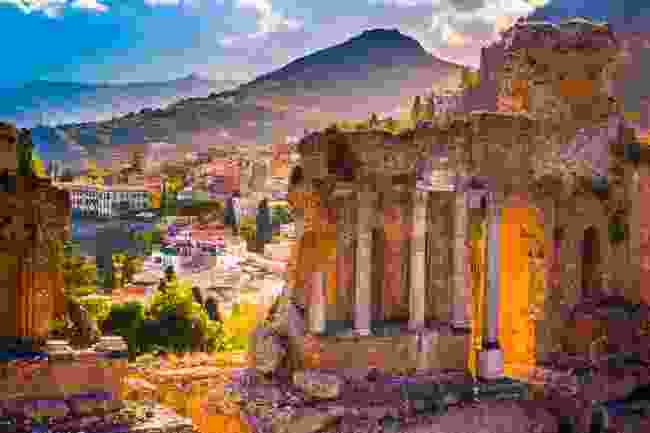 The view from the ancient Greek theatre, Taormina (Dreamstime)

These two towns in Sicily's northeast have stolen the hearts of visitors for over 200 years. Both towns are a maze of honey-hued streets, sprinkled with traditional gelaterias and pasticcerias.

The winding alleys are linked together by harlequin-patterned piazzas and flanked by old churches; their baroque facades displaying curious memento mori motifs.

Taormina and Castelmola are both 100s of metres above sea level. The allure of the towns' attractions - primarily Taormina's ancient Greek amphitheatre - are easily matched by the opportunities to gaze upon the island's volcanic scenery from such dizzying heights, at times above the clouds.

Both towns are accessible by car or bus, but do opt for the bus as the roads are both difficult to navigate and hellish to park on (in fact, parking is not allowed in Taormina's centre). Those with a good level of fitness can walk the 200m elevation to Taormina (you'll witness breathtaking views of Isola Bella and Giardini Naxos which are also well-worth visiting). The walk to Castelmola is considerably more difficult - it's more than double the elevation of Taormina at over 500m. 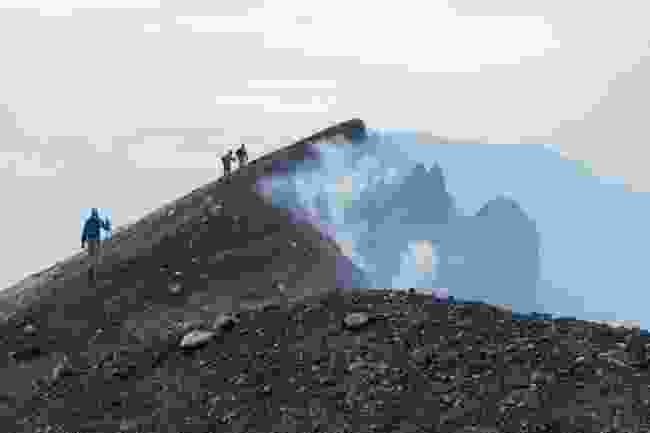 Mount Etna dominates the Sicilian landscape; its omniscient, smoking silhouette a constant reminder of the very fabric of the island's past, present and future.

It's the second most active volcano in the world, and as such it's of course a must-visit in Sicily. Those with a low level of fitness don't need to worry - visiting Etna can be as easy or as difficult as you intend to make it. Take a sturdy pair of high-top walking boots, gloves, a snood and plenty of layers for the high, icy winds (which steadily become more severe the higher you go - even in the summer).

Your first stop should be Etna Sud, a base camp of sorts with a small selection of tourist shops, restaurants, hotels and importantly, the cable car station, Funivia dell'Etna.

Take the cable car (around 30 Euros for a round trip) to 2,900m to begin your Etna expedition. Taking the cable car is by no means a shortcut - there are plenty of opportunities for heart-pumping hikes from the setting-off point, including the invigorating final ascent to the summit craters at over 3,300m.

Bear in mind that it's not possible to climb to the summit craters without a qualified guide or volcanologist. Climbs to Etna's main crater are currently prohibited, owing to unpredictable volcano conditions.

3. The Valley of Temples, Agrigento 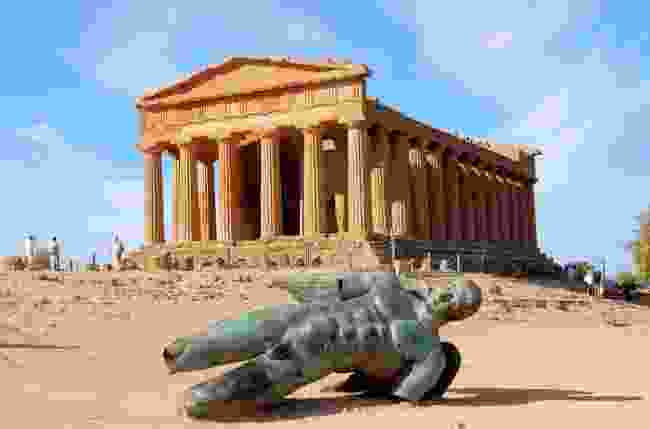 When Icarus flew too close to the sun during his and his father Daedalus’ escape from Crete, his wax-crafted wings melted; he plummeted to the sea and drowned. Daedalus, distraught, sought sanctuary in Agrigento, on the undiscovered island of Sicily, and mourned his son. In Apollo’s honour, he built what would become the first of the city’s fabled wonders, The Temple of Apollo. (Or so the Greek myth goes...)

In real terms, the city was founded by the Ancient Greeks around 500 BC. Their archaeological legacy - namely the world-famous Valley of Temples - remains remarkably well-preserved to this day. The Ancient Greeks believed Agrigento to have been founded by Daedalus, and so began its transformation into an important cultural and religious hub.

The UNESCO-listed archaeological park Valle dei Templi consists of seven temples built between 400 and 500 BC. They are the Temple of Concordia, Temple of Juno (or Hera), Temple of Heracles, Temple of Olympian Zeus, The Sanctuary of Demeter and Persephone (formerly known as the Temple of Castor and Pollux), Temple of Vulcan and Temple of Asclepius.

Various other relics remain in the city. After all, at its height, Agrigento is said to have held 300,000 inhabitants, ruled by a series of notable figures including Phalaris the tyrant, a notorious ruler whose executions saw wrongdoers enclosed inside a bronze bull and slow-roasted over a fire.

An oratory erected in his name is said to have been built on the site of his former palace. Look out too for a mausoleum that was once thought to have been the final resting place of another tyrant ruler named Theron, a pre-Hellenic cave sanctuary, and an 800-year-old olive tree.

When the ancient mountain city of Netum was destroyed in the 17th century, Italy's architectural elite busied themselves on a new vision for the displaced residents, inspired by the period's defining design movement. What they created was a baroque masterpiece: today's Noto, 10km south of the original site.

This small town was designed to impress. Its elevated position, surrounded by green hills and citrus orchards, was perfectly orchestrated by the architects to allow their buildings to be bathed in an apricot glow at twilight. The result: the shadows of the buildings’ stuccoed figures dancing across their already-theatrical facades.

While you don't need to spend more than a day or two exploring the town itself, it's worth settling in for a few days as its location is an ideal base for a range of local attractions, including the Vendicari Nature Reserve, Cavagrande del Cassibile Nature Reserve, the baroque towns of Modica and Ragusa, and the gorgeous seaside towns of Marzamemi and Portopalo.

Conveniently, the 'stone garden of Sicily’ is perfect for mornings spent indulging in granita, and evenings spent strolling the lamp-lit streets, leaving your days free to explore the region.

If you have time, don't miss the now crumbled Noto Antica, historic Netum, with roots that pre-date the Roman conquest of Sicily. There are plenty of archaeological gems to be discovered in amongst the mountain vegetation that has consumed them over time, and the views from the top of the Norman fort are incredible. You can't get there by public transport, but the drive, along wildflower-filled roads is spectacular. 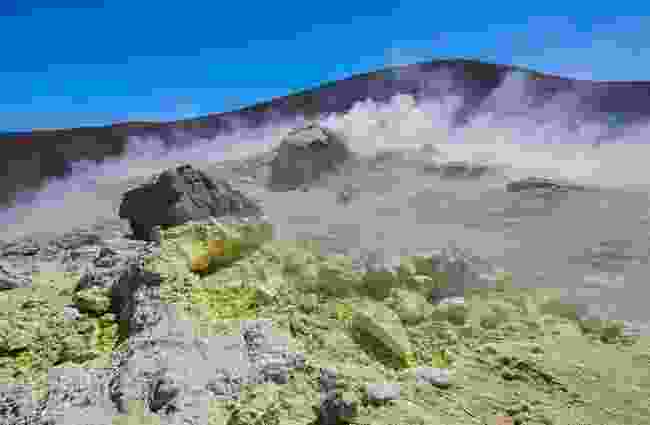 The island of Vulcano, Sicily (Dreamstime)

This huddle of volcanic islands are part of the Sicilian province of Messina, and their wild, fiery beauty isn't to be missed. Situated in the Tyrrhenian Sea, halfway between Sicily’s northeast and the toe cap of Italy’s boot, they’re collectively listed as a UNESCO World Heritage Site.

Lipari forms the central hub of the Aeolian Islands. It serves as an excellent jumping-off-point for the surrounding six islands. It’s well-equipped with a range of restaurants and hotels, and its transportation hub offers frequent car ferries and hydrofoils to and from Milazzo and Messina, the mainland Sicilian ports, as well as smaller boats to the other islands. When visiting the smaller islands, you can explore the port towns on foot, but you can hire a moped to make the most of your time.

Most people make a beeline for the island of Vulcano. It’s famous for its mud baths, or fanghi. Its otherworldly landscape is dominated by the smoking Gran Cratere volcano, that exudes sulphurous fumes almost constantly. You’ll find several beaches there too, with thermal hot springs.

Spend time on spectacular black sand beaches on Stromboli, perhaps the most beautiful of the Aeolian Islands. The Stromboli volcano has been in a state of constant eruption since 1932 - its clouds of steam emanate continuously from the peak. From here, you can hike the foothills of the volcano and the rocky coves of the surrounding beaches.

The smaller islands of Salina, Panarea, Alicudi and Filicudi are the lesser-visited of the Aeolian Islands. If you love a little luxury, head to Panarea for its glitzy, high-end hotels. Nature lovers should head to Salina, Alicudi or Filicudi for their verdant landscapes. The latter two are so remote they're almost completely untouched by tourists. 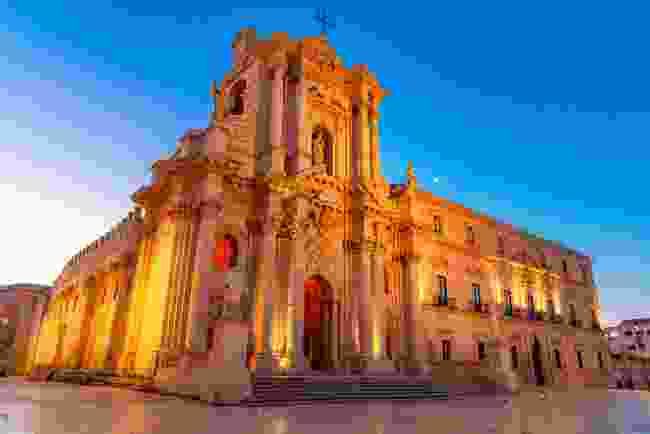 Siracusa is a sprawling metropolis in southern Sicily, home to some of the island’s most important archaeological finds. Well-preserved Greek and Roman ruins are what have come to define the city’s appeal, the main attraction being Parco Archeologico della Neapolis.

The park contains many a number of ancient wonders. Primarily a Greek amphitheatre, a Roman gladiatorial theatre, a sacrificial altar, and Latomia del Paradiso, a network of ancient limestone quarries and catacombs.

The latter is famed as the location of the Ear of Dionysius, a cave with an ear-shaped, slashed opening. It was named by the revered Italian painter Caravaggio, who was inspired by the local legend suggesting the cave’s fine-tuned acoustics allowed Dionysius, an ancient Sicilian ruler, to trap political prisoners and eavesdrop easily on their wicked plans.

You couldn’t visit Siracusa without visiting Ortigia, the jewel in Siracusa’s crown. The small, bridge-linked island is where the locals go to have a good time. With a range of glitzy restaurants and bars, plus picture-perfect sunsets, it’s an enchanting romantic setting and ideal for evening strolling.

Don't miss the Cathedral of Siracusa in Piazza del Duomo. It's a masterpiece of baroque architecture, and its interior unlike any other cathedral you'll have visited before. 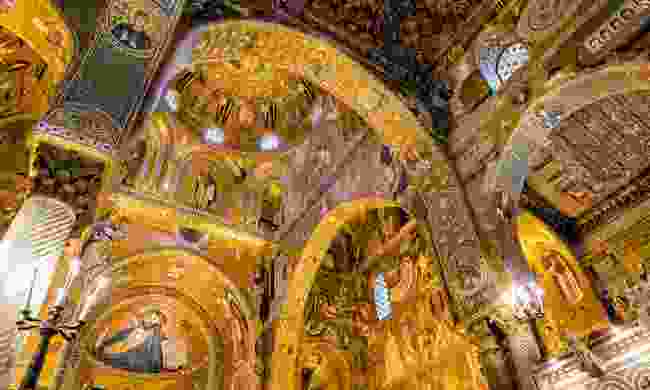 Palermo, Sicily’s capital, is a city with its own distinct, almost tangible atmosphere. This is Sicily’s beating heart; an ideal location for first-timers to the island with a week or so to explore. Its varied landscape offers something for everyone, while its range of bars, restaurants, theatres and museums means you can be sure of a chaotic itinerary (which is pretty fitting for life in Palermo!).

Don’t miss Teatro Massimo, a feat of Sicilian architecture and one of the world's most renowned opera houses. Art and history lovers will adore Palazzo dei Normani, a Norman palace that's home to the dazzling Palatine Chapel, filled with gilded religious iconography. Puppet show theatre is one of Palermo's quirky cultural delights, and you can catch regular performances at one of the many theatres in the city.

Monte Pellegrino, the city’s mighty mountain, provides a beautiful backdrop to the city, but also excellent opportunities for long walks and hiking, with views out to Mondello bay and beyond.

Spiaggia di Mondello is the city’s popular white-sand beach. If you’re planning a beach day, do arrive early, or ideally on a weekday, as it can get a little difficult to find a patch of free sand on the beach that’s largely taken up by private beach huts.

For those with a taste for the macabre, head to the city’s historic catacombs, Catacombe dei Cappuccini. The embalming of bodies was once a 15th century funerary practice reserved for passed Capuchin monks, but it soon became fashionable among Palermo's wealthy citizens.

What draws visitors to the catacombs is the corpse of two-year-old Rosalia Lombardo. The little girl died of pneumonia in 1920. Her tragic passing led her father to embalm her body using techniques never attempted before, and as a result, her embalmed body is extremely well-preserved. 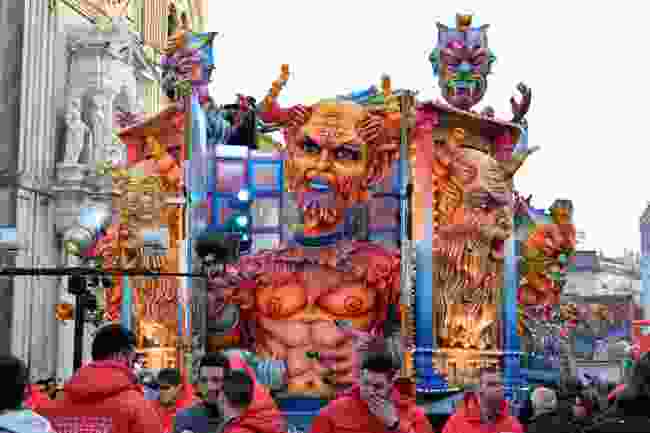 If you’re visiting Sicily early in the year, head to Acireale, in the province of Catania. Though the city itself is somewhat unremarkable, you’ll be sorry to miss its colourful carnival season.

Carnevale di Acireale is one of Sicily’s boldest cultural events, taking place between February and March. It’s one of the largest and most frequented carnivals in Italy, and it’s also among Sicily’s most ancient, tracing its roots back to the 16th century.

Floats flood the city’s streets, loaded with whimsical, grotesque papier-mâché figures, often a satirical take on politicians and other public figures. Abbatazzi (folk poets) perform across the city, and cassariata (horse-drawn carriages loaded with the town’s nobles) parade the streets showering revellers with sweets and confetti.

Taking place the month before Lent, the festival is a time of feasting, and there are Sicilian street food delights to be found on every corner. The festival ends with the burning of the Re Carnevale (Carnival King) and an extraordinary fireworks display.

Summer visitors to Sicily needn't miss out, though. Such is the popularity of the festival, it’s repeated again in August and named Notte Bianca, in celebration of the longer evenings.

5 reasons to visit Palermo, a former Capital of Culture