Whether you’re after centuries-old castles or vast heather-covered glens, Scotland has something for you – preferably with a 12-year-old single malt close to hand...

1. Take to the water

Kayaker near castle in Scotland (Shutterstock)

Landing a boat on an uninhabited island and lighting a fire on the beach may sound like the stuff of dreams, but it’s perfectly possible in the Outer Hebrides where most of the 200-odd islands are deserted. This is one of the world’s best destinations for sea kayaking, and it hosts international events for the seriously committed. But you don’t need any experience to give it a go, and there are a number of companies who will take you out for a paddle.

Looking for something a little more hardcore? Combining walking trips with hands-on sailing, Wilderness Scotlands' boat trips around Knoydart, Skye & The Small Isles get you right to the heart of this windswept idyll – even if you have zero sailing experience. By helping to crew the boat, you'll feel like you're exploring the islands under your own steam – even though there is always expert help on hand.

If you prefer to let others do all the work, take a boat trip to Eigg, a volcanic island off Skye. When the sun shines on the shell beaches here you could almost believe you were in the Caribbean. OK, so it doesn’t feel like that when the rain’s belting in sideways, but this still has plenty to offer. Look for dolphins from the ferry, then climb the volcanic plug of An Sgurr, before a walk with the ‘Singing Sands’ hissing between your toes.

It sounds counter-intuitive to plan a city break in the wildest and most remote part of the UK. But if it’s culture you’re after, as well as fine food and smoky single malts, then Scotland’s two biggest cities, Edinburgh and Glasgow, can offer that in droves. All in a perfectly manageable bite.

Helen Ochyra’s short break guide to Glasgow reveals where to find the city’s finest galleries and museums, its up-and-coming areas, and the rough edges that give Glasgow its charm. Make sure you drop by the People's Palace in Glasgow Green to check out Billy Connolly’s infamous banana shoes.

Claire Wilson, on the other hand, heads to Glasgow’s more refined sister, Edinburgh, and discovers the best way to start your long weekend in the Scottish capital. Edinburgh Castle and the Royal Mile will keep the history buff happy. The world famous Fringe Festival – the world’s largest arts festival – offers something for everyone. 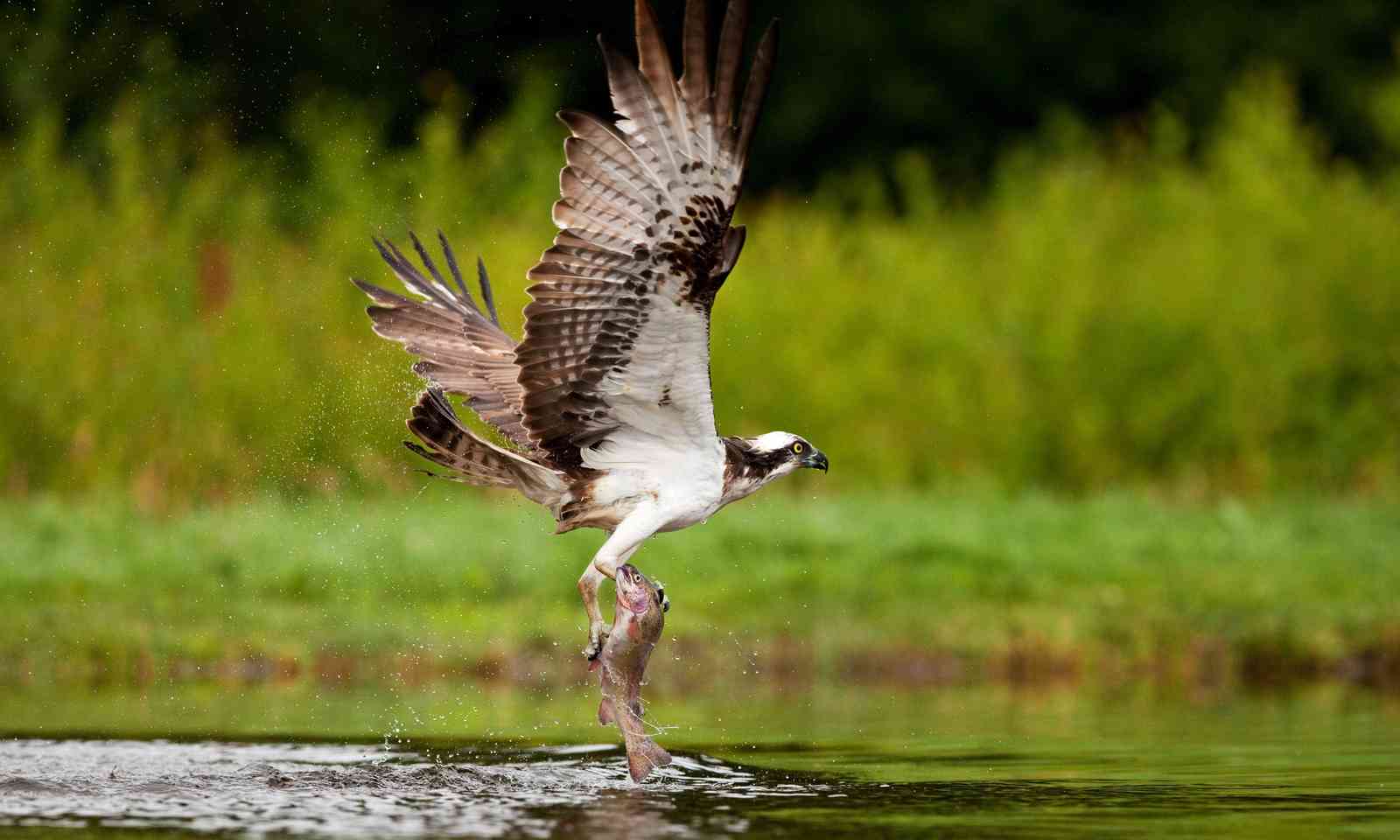 Whether you are a serious twitcher or just a beginner, birdwatching in Scotland offers the chance to immerse yourself in the country’s most spectacular scenery.

Speyside, an area of mountains, moors and valleys sandwiched between Scotland’s Cairngorm and Monadhliath ranges, is a great place to start. This patch of the Highlands is home to hundreds of species, many endemic and endangered, from majestic birds of prey like the golden eagle to common but overlooked finches.

Thanks to a reintroduction programme started in 1975, sea eagles have returned to the west coast of Scotland thanks to a reintroduction programme started in 1975. The fourth-largest eagle in the world, with a whopping 2.5m wingspan, you can watch them nesting from a RSPB has a hide at Loch Frisa on Mull. Ospreys have returned to nest in Scotland too. Head to the RSPB reserve at Loch Garten for your best chance to spot one.

If it’s puffins you want to see, head to Handa Island near Scourie. In summer it is home to thousands of seabirds, including a large contingent of puffins. They nest in burrows in the cliffs and are surprisingly tolerant of human onlookers. A short boat trip gets you to the island, run as a nature reserve by the Scottish Wildlife Trust. Look out too for razorbills, great skuas and kittiwakes. 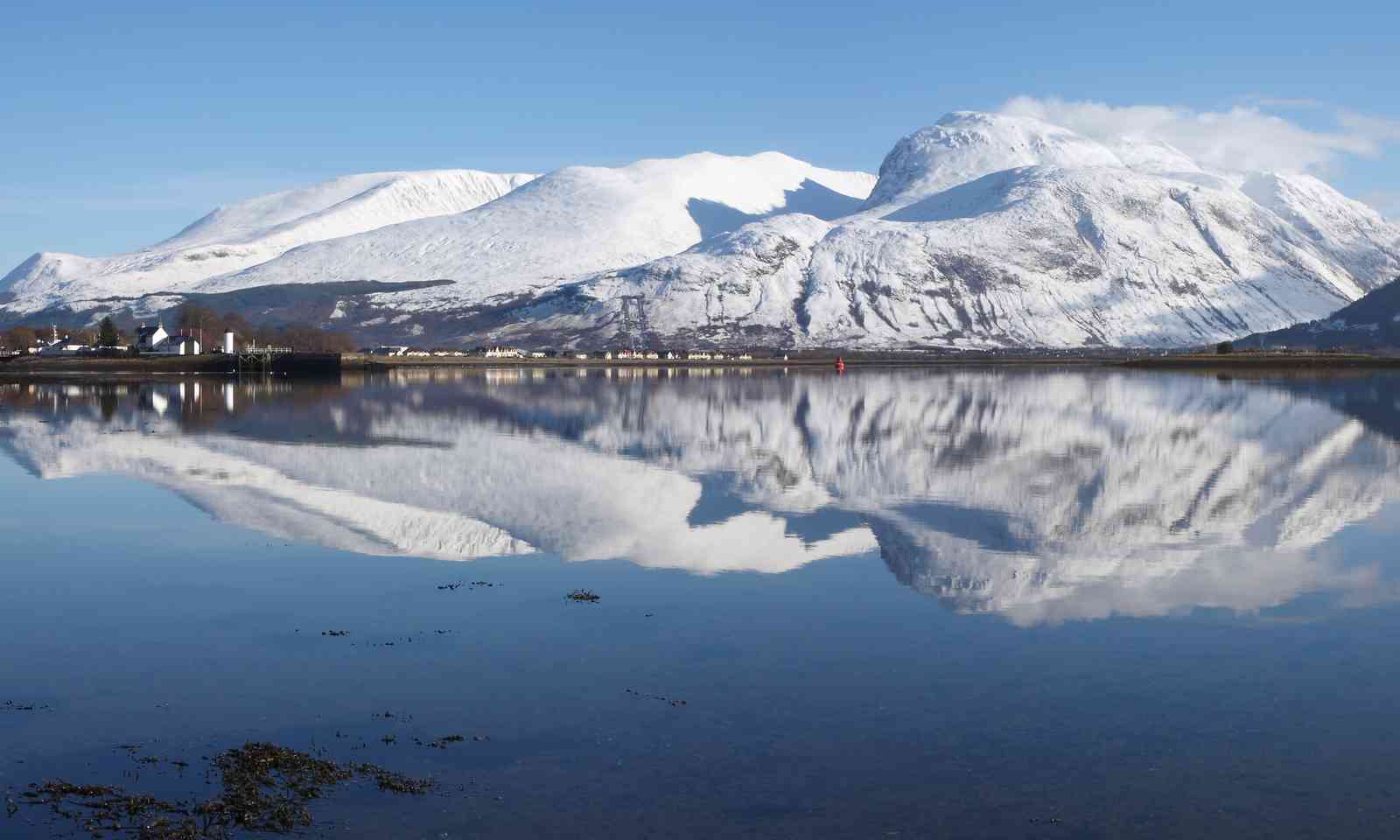 If you already have hill-walking experience don’t climb Ben Nevis by the Tourist Path (the name says it all); follow the spectacular Carn Mór Dearg Arête, one of the finest ridges in Scotland, sweeping in a perfect arc towards the North Face. At the top you can join the masses as they descend via the main route and enjoy a pint of real ale in the Ben Nevis Inn at the bottom.

Alternatively, head to the Cairngorms, a collection of peaks – many over 1,200m – that scrape the skyline and offer walkers the chance to get off the beaten track (though map, compass and ability to navigate on pathless terrain are vital).

The most accessible peak is Cairn Gorm. A footpath weaves to its summit from Cairngorm Mountain. Those feeling less energetic can take the funicular railway to a viewpoint to spot ptarmigan, snow bunting, eagles and even reindeer, the only herd in Britain; guided walks to the top are also available from here. Note that snow can linger on top well into spring, and even into the summer.

5. Take the high (or low) road in a campervan

With its dramatic coast, crumbling castles, remote roads and liberal stance on wild camping, Scotland is best seen by campervan. From dramatic highland heaths to deserted Atlantic beaches, a breathtaking vista awaits around every bend. And thanks to the Land Reform Act, you have the right to pull over camp almost anywhere.

Of course, you can’t just pitch up on someone’s driveway for the night. But it does mean you can stay out in some of the country’s best wild landscapes, cosy in your heated mobile accommodation, with a view of your own choosing. Scotland is designed for campervanning.

A few tips: Trying to fit a lot in can be tempting, but keep to a leisurely pace to better enjoy all the fantastic scenery. Also, highland roads have few opportunities for safe overtaking. Driving etiquette is to pull over if you see traffic coming up behind you. It means locals can get home at a reasonable hour and you can drive along at your own pace without a car right on your tail. 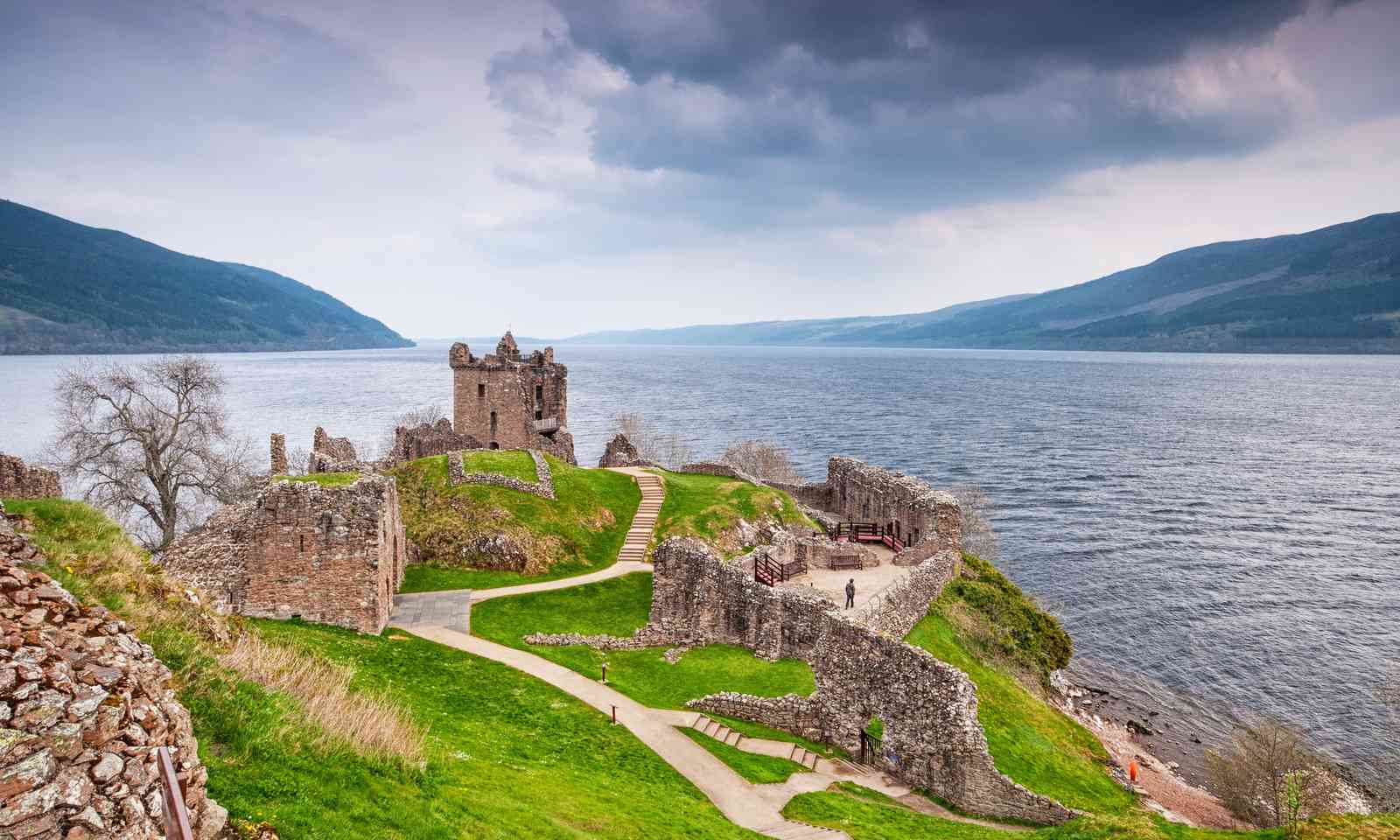 Of all the lochs in all the land, the most famous is undoubtedly Loch Ness, home to a legendary monster. On arrival, amid the tour buses, it may not seem like a wild place, but there’s a way to make it so.

Start at the Loch Ness Centre & Exhibition inside the Drumnadrochit Hotel, on the north side of the loch, to gen up on the history of the Nessie sightings and hoaxes and to form your own opinion on what lies beneath the water.

After grabbing some tasty homebaked lunch supplies at The Baking Birds in Drumnadrochit, leave the tourists behind by driving up to the car park at the end of Bunloit Road (reached via Lewiston) to pick up the footpath that will lead you to the summit of Meall Fuar-mhonaidh. At just 699m high, it’s not a giant peak, but it is a prominent point from which to gaze down on the entire loch.

Soon monsters will be the last thing on your mind as you get lost in the views over to the hills and tiny lochans between you and Glen Affric – a true slice of wild paradise. 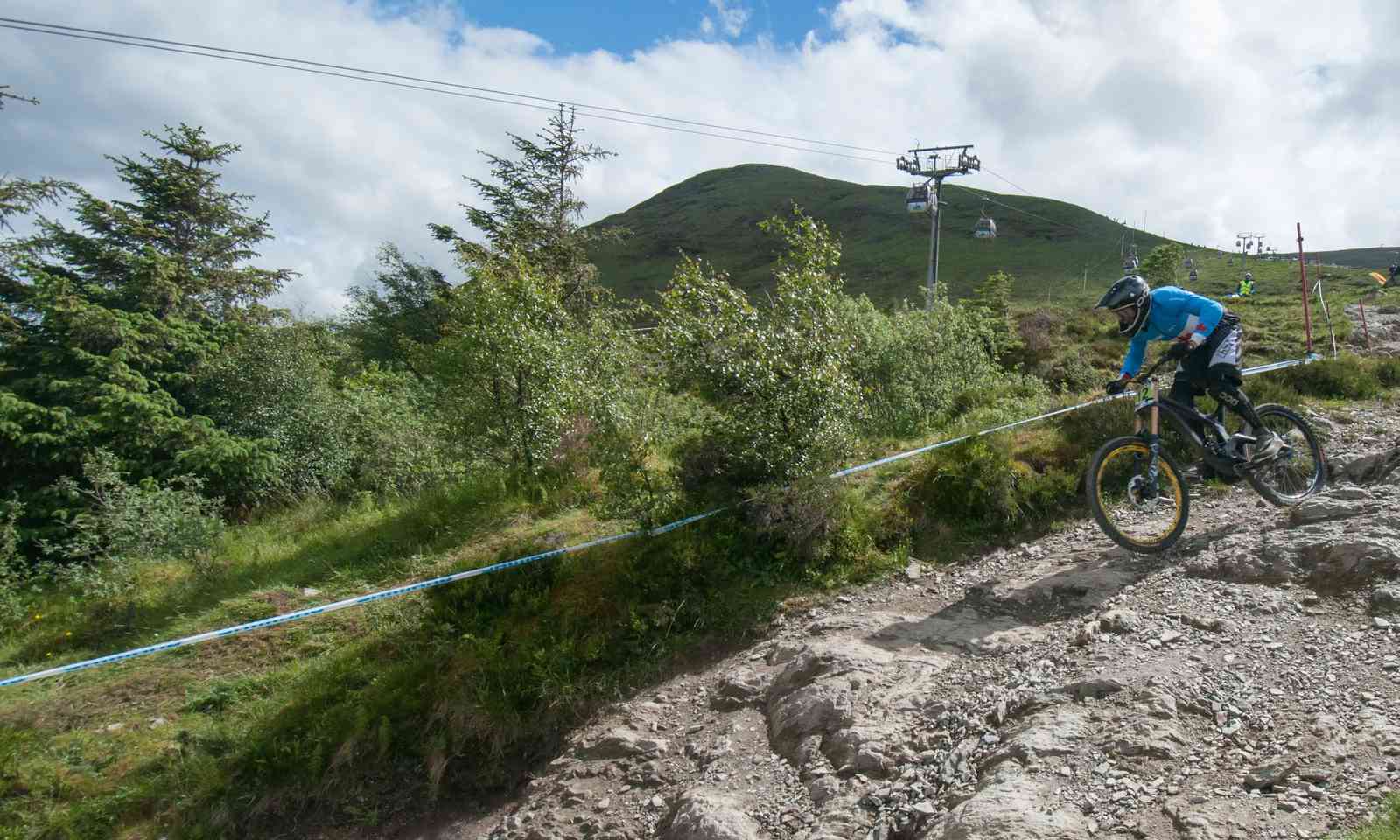 Scotland’s reputation as the world’s best destination for downhill mountain-biking is well deserved; dedicated downhill sites have sprung up across the country. One of the best is Laggan Wolftrax.

You don’t have to be a teenage thrill-seeker to get something out of this – although there are black runs if you are. For those who prefer a nice pootle around the woods, there are blue runs, easy flat trails and tea and cake in the café at the end.

Or why not cycle the Outer Hebrides? It’s only 175km from Vatersay on Barra in the south to Stornoway on Lewis in the north and the cycling is easy along traffic-free single-track roads. The sights are inspiration enough: the mountains, the moorland, the corncrakes croaking in the irises, the dunes, the Callanish standing stones and, at the end of the day, the sun setting below the Atlantic swell over your left shoulder.

8.  Take it to the edge in the Shetlands Blanket bogs and moors scalped by peat dug-outs and flecked with freshwater lochs, scattered crofthouses and tiny settlement huddled around kelp-wrapped bays – the Shetlands are quite unlike anywhere else in Scotland.

Here island life is remote and quirky – a place of ‘donations only’ cafés and a bus stop shelters filled with house plants, an armchair, even a television.

It is also where the British Isles come to an abrupt northerly end on the island of Unst. The northern extremity of Britain is marked by the Hermaness National Nature Reserve and guarded by a breeding colony of 800 pairs of belligerent bonxies.

At the edge of the moorland, gale-gnawed cliffs plummet 170m into an effervescent sea and look out towards the lighthouse on Muckle Flugga – once the most northerly inhabited point in the British Isles, but now unmanned and remotely controlled. 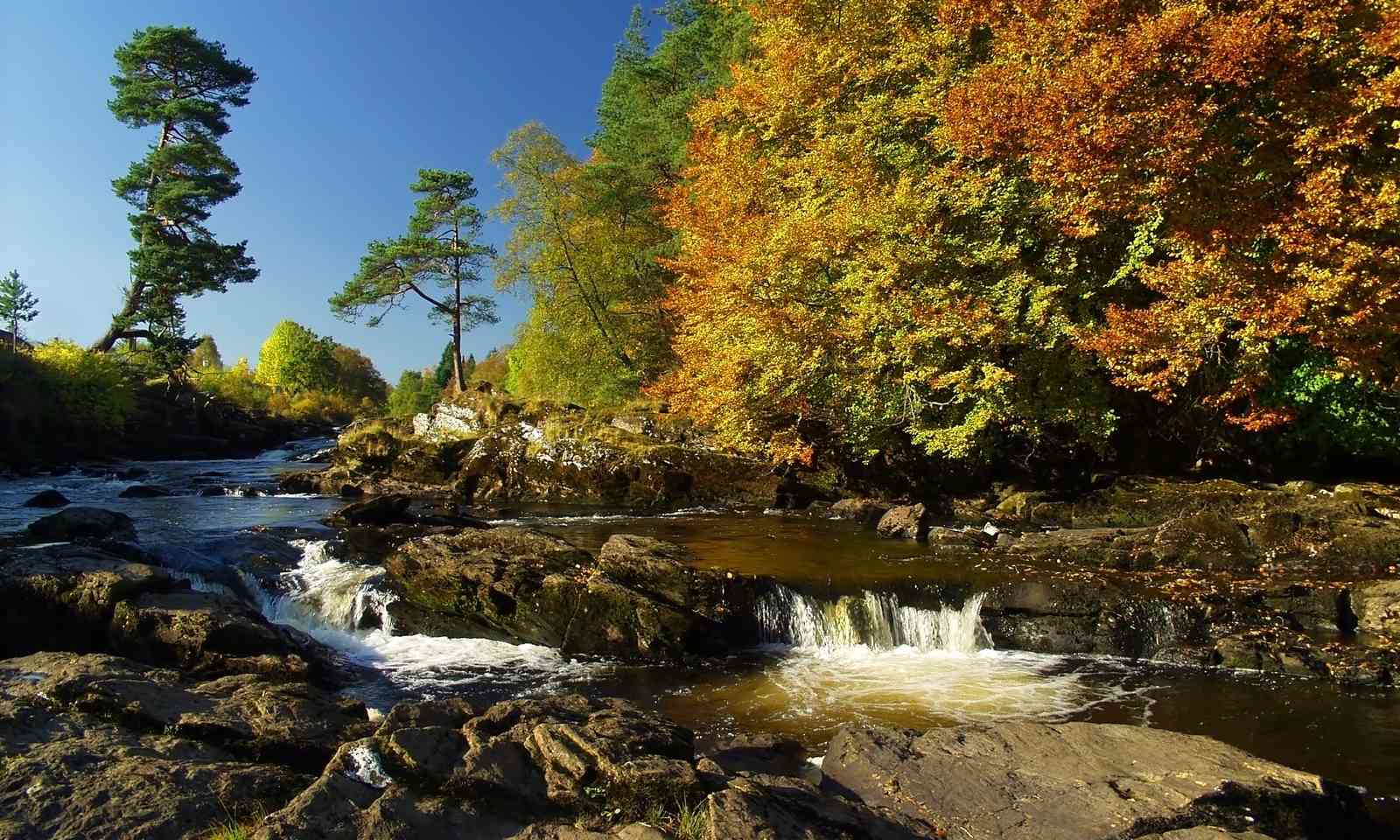 The Rob Roy Way trail is seventy nine miles long; it starts in Drymen some twenty miles north of Glasgow, heads north east through Stirlingshire, and ends in Pitlochry.

The trail takes walkers and cyclists through some of Scotland’s finest scenery and covers much of the area where Scottish outlaw Rob Roy MacGregor spent his life, and where he was eventually laid to rest after his death in 1734.

Along the way you’ll be treated to some of the finest scenery in Scotland. Starting in the Forests of the Trossachs, surrounded by huge pine trees, you’ll soon emerge to truly stunning views of the Lochs and Glens that form a constant backdrop to much of the Rob Roy Way.

Stop by the spectacular falls at Dochart for a spot of salmon fishing or simply enjoy a pint at the pub beside it. A local is sure to be on hand to tell you the tale of the trail’s namesake and his daring deeds in this spectacular part of the country.


Where to spot golden eagles in Scotland


5 of the best road trips in Scotland