9 things you must do in Peru

OK, visiting Machu Picchu is a given. But there's a lot more to Peru than this magnificent Inca citadel. Here are some activities to get you started... 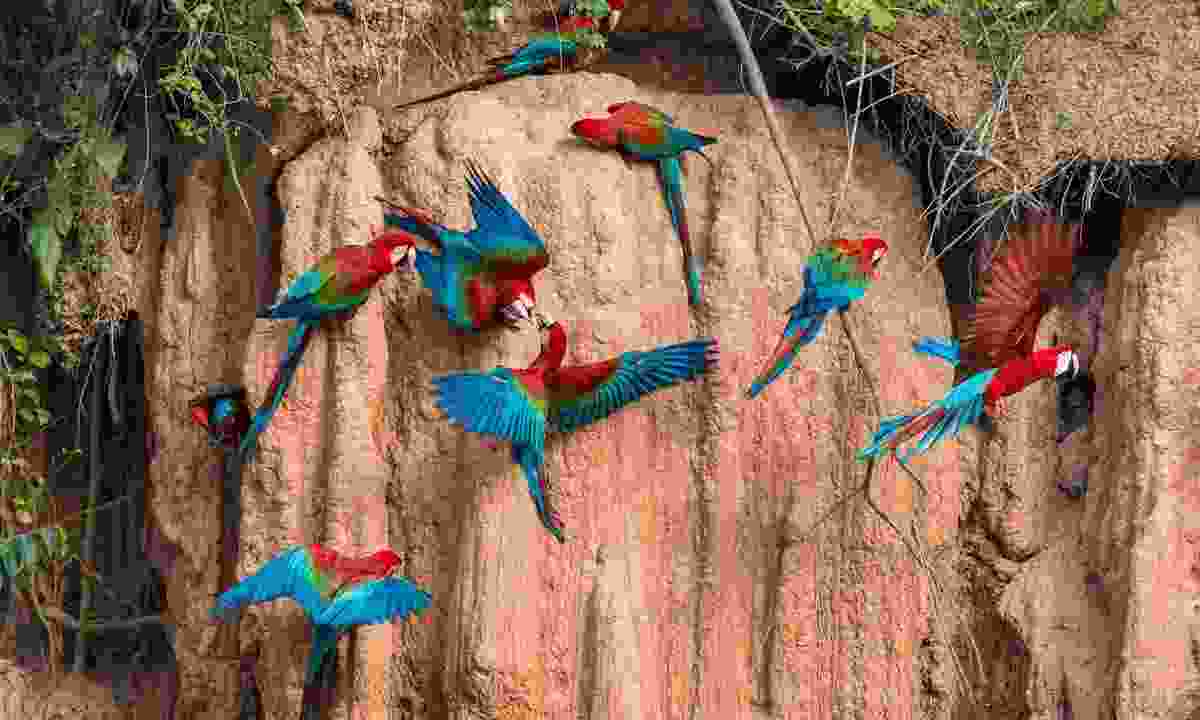 Macaws in the Peruvian Amazon (Shutterstock)

Peru is where the Amazon gets its start in life, in Carhuasanta, before winding its way down the Andes and into the Amazon basin on the other side. So Peru is the only South American country where you can experience each of its different forms.

The Peruvian part of the Amazon jungle is possibly the most diverse and prolific section of all. And Manu National Park is one of the most bio-diverse areas in the whole world, boasting at least 1,000 birds and over 200 mammal species. Meet caiman and paddle canoes along tranquil waterways, lulled by the all-encompassing 'symphony of green'.  Here you can explore the river by boat or get a deeper understanding of the jungle and it’s people by helping out on a volunteering project.

2. Find a way to Machu Picchu 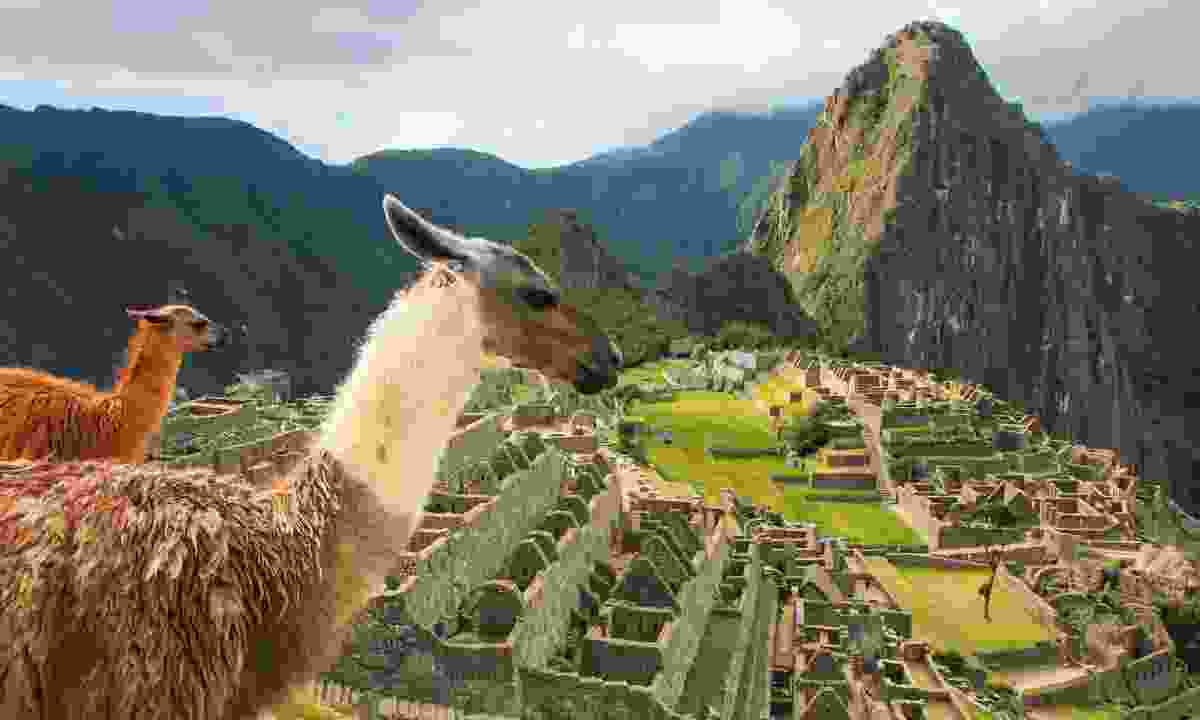 You don’t need convincing to drop by the Inca ruins of Machu Picchu. A trek along an ancient path between soaring mountains to get to a secret city – the Inca Trail is the stuff of travel legends. But you are probably bewildered by the choice of ways to get there.

You could hike the Inca Trail. This unforgettable four-day walk is one of the world's greatest, using stone Inca stairways to pass deserted villages and fields terraced onto sheer Andean slopes. But be warned: numbers are limited.

If you're too late to book a place try the most popular alternative, the Choquequirao Trail. Or walk the Lares Trek, commonly the ‘people’s trail’.

For something completely different, why not ride the Salkantay Trek? Higher and longer, it lacks the Inca ruins that the ‘Classic’ trail is known for, but it has jaw-dropping scenery, crosses 15 ecosystems and isn’t as busy. Try it on horse-back. Trot to the top of the alternative Inca Trail for a view of Machu Picchu that the crowds don't see. 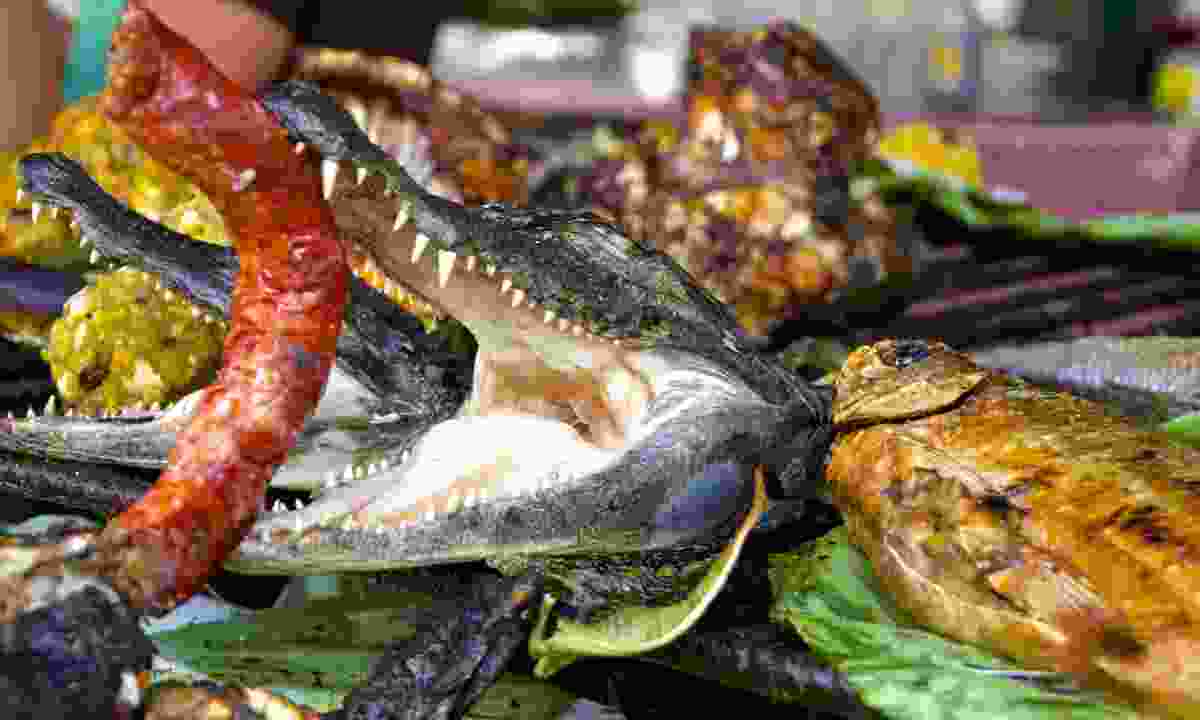 From roasted guinea pig to the world's most pungent potatoes, Peru's cuisine isn't for the faint hearted – but fortune favours the brave.

Cuy (guinea pig) is Peru’s most notorious taste experience. It is most easily found in highland towns like Cusco and the Urubamba valley. Get out of the main square and burrow deep into the back streets for a more authentic experience.

If meat’s your thing but you can’t stomach guinea pig, then head for Arequipa. Sitting in the shadow of El Misti volcano, the mountain’s sillar stone is ubiquitous in the old quarter.

Potatoes have been cultivated in the Andes for 10,000 years and even today, there are 3,800 different types on offer.

Over the last few years, Peru has become something of a foodie destination. From the coast to the capital, from the highlands to the jungle, young chefs are creating some of the most exciting – and tasty – dishes on the planet.

4. Get the most out of Lima 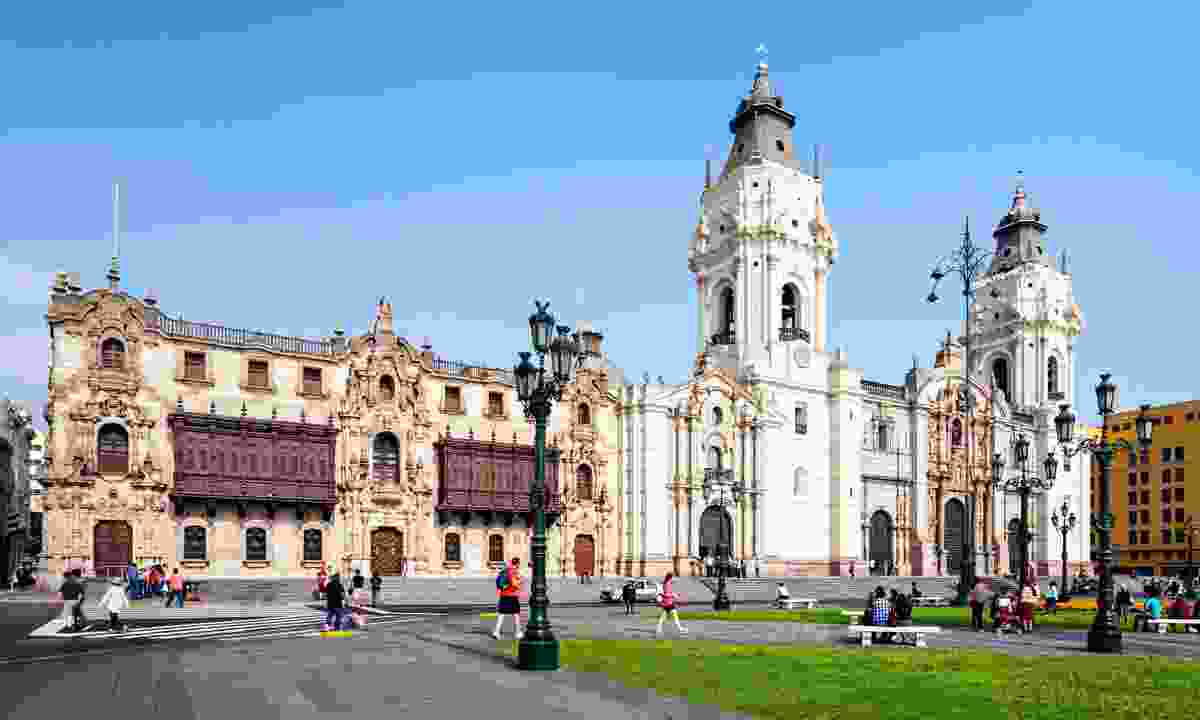 With most travellers drawn irresistibly to the tourist hubs Cusco and Arequipa, the charms of the capital, Lima, are often overlooked. With coastline, mountains and jungle mere hours from the capital, Lima offers respite and exciting alternatives to the stifling crowds and bus travel that await you along the Gringo Trail.

Lunahuana offers white water rafting and vineyards. The adobe buildings of Tarma hark back to pre-Colombian times, with jungle and South America’s deepest cave nearby.

If you get stuck in the capital, don’t despair. There are lots of things to do, many for free. Every Tuesday, Thursday, Friday and Saturday at 12.30pm you can join a 90-minute tour of the UNESCO-listed colonial town. No booking required, just show up at Plaza Peru by the small fountain.

5. Spend a day with the Condors 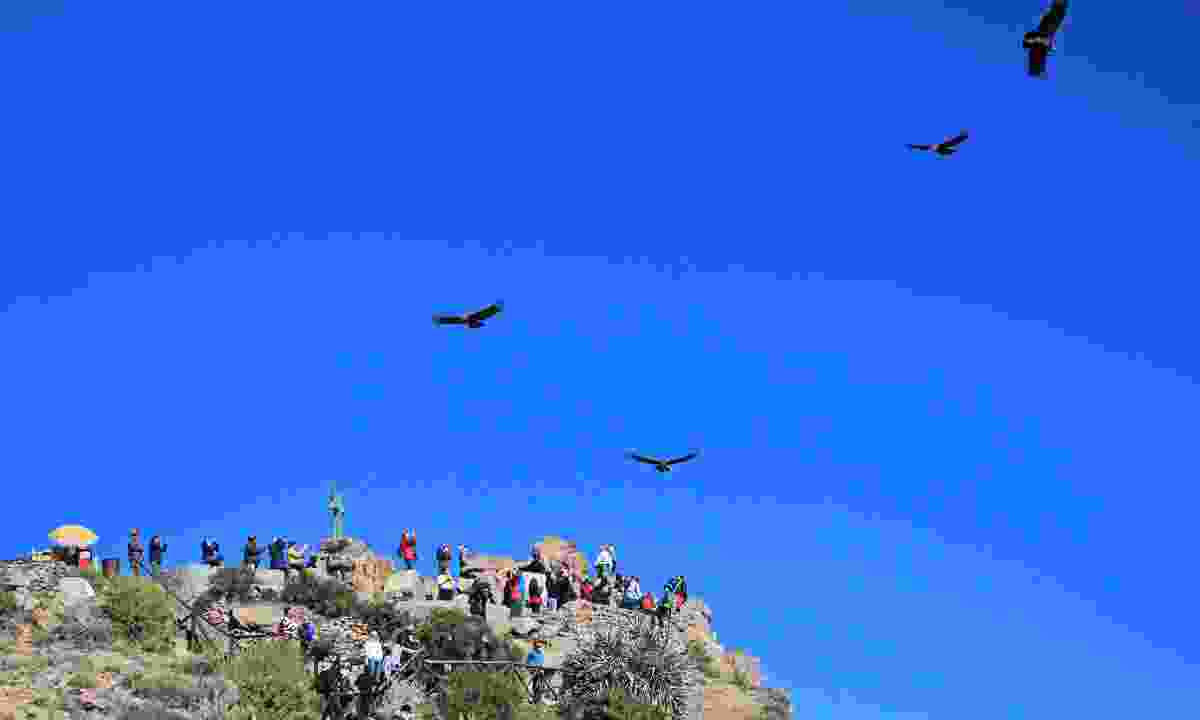 Condors soar in the sky at Colca Canyon, Peru (Dreamstime)

The far-south of Peru is a land of ice mummies, misty volcanoes and the Amazon’s source. You’ll also find one of the world’s deepest canyons, Colca, where mighty condors rule the roost.

Head to the Cruz del Condor viewpoint. This is the best spot to watch these majestic birds riding on the morning’s thermals. Watch as they glide, turn, dive and climb, soaring above your head before gradually making their way down the length of the canyon, disappearing out of sight.

6. Hike and climb every mountain 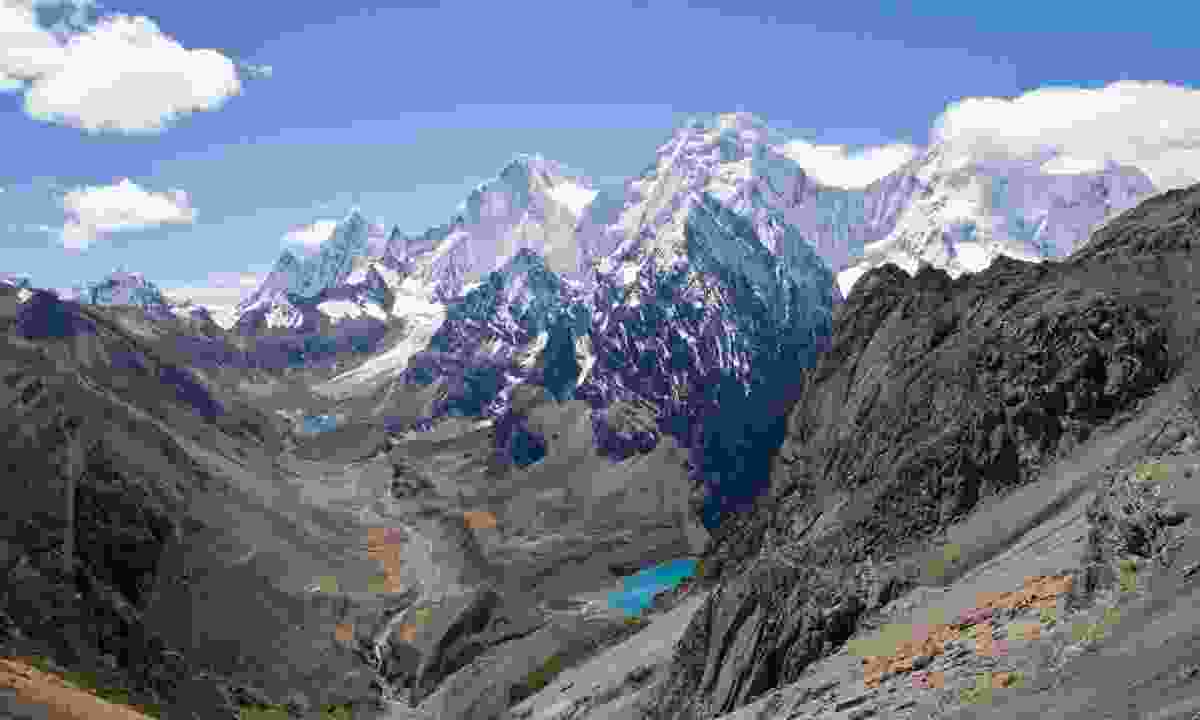 The snow-clad peaks of the Cordillera Huayhuash present some of the most challenging - and remote - mountaineering experiences in the world. The trek to a base camp is quite enough for most, but the views ­ even from here are unforgettable.

Or walk the classic trek of the Cordillera Blanca: Llanganuco to Santa Cruz. It is unbelievably beautiful, with trail that follows a tumbling river, winding its way ever upward through a variety of scenery. An uninterrupted view of the white craggy pyramid of Taulliraju is your ultimate reward.

Unless you decide to sip Chilean wine on from a hotel balcony in Huaraz, watching the changing light on Mounts Huascarán and Huandoy, of course.

7. Discover another side of Cusco 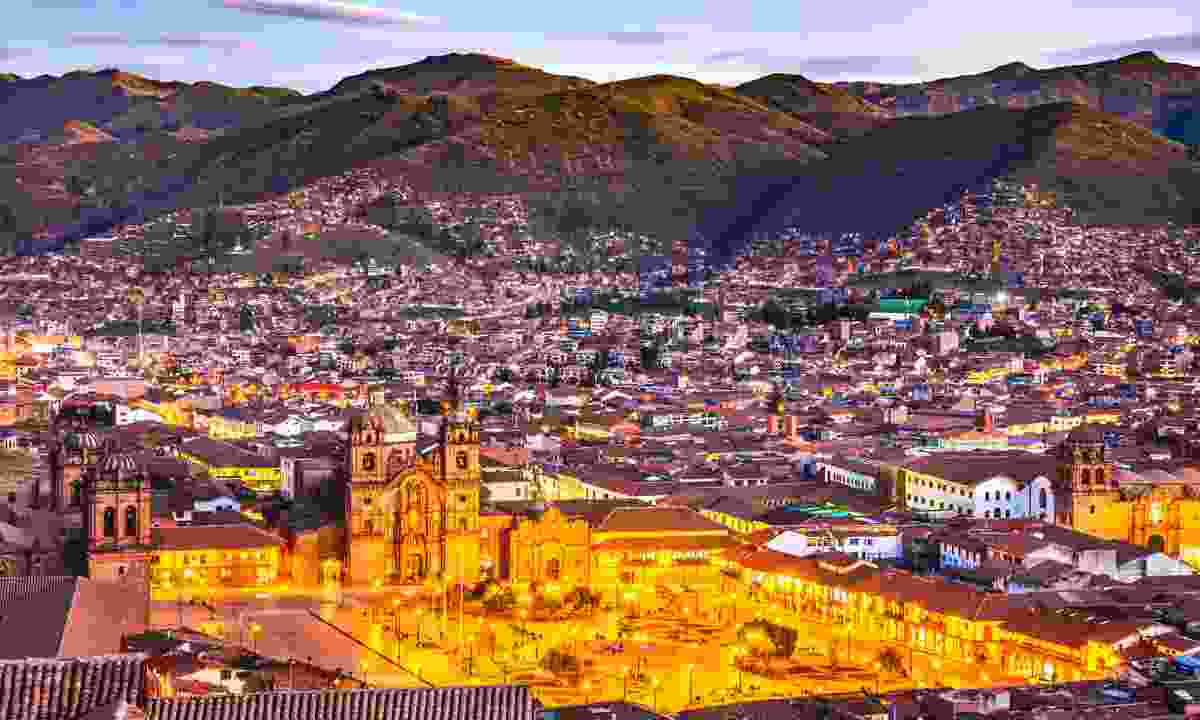 Plaza de Armas and Church of the Society of Jesus, Cusco, Peru (Dreamstime)

With Macchu Picchu and the Inca Trail just over the hills, most travellers are tempted to get out of Cusco as soon as possible. But for the patient visitor prepared to extend their stay by a day or two, this stunning colonial city reveals even more of its charms.

A Boleto Turistico del Cusco pass gives access to 15 key historic sites. Then head out to Sacsayhuamán, overlooking the city, and walk back down to Cusco through the San Blas neighbourhood, the artisan quarter, with its galleries and boutiques.

Next head out to the Sacred Valley, the valley of the Urubamba River, where you can visit the historic Inca sites at Pisac, Ollantaytambo and Chinchero. If it’s a Tuesday, Thursday or Sunday, visit Chinchero market (which isn’t as touristy as the more famous Pisac market), and the adjacent textile cooperative for a spot of shopping. The pre-Incan salt pans – or salineras – at Maras are worth a visit too.

8. Get your head in the clouds It was the Incas who first called the Chachapoyan the ‘people of the clouds’ and their mountaintop lair, shrouded in mist and covered in thick jungle, is straight out of an Indiana Jones movie.

The Chachapoyan have left an awe-inspiring collection of sophisticated hilltop fortifications and roundhouse remains, but it is the way they carefully preserved their dead that has intrigued archeologists and travellers alike.

Several caches of mummies have been found in extraordinarily inaccessible spots, high up in the cliffs and in underground vaults. Just make sure to pack your Wellies and a machete.

9. Read between the (Nazca) lines 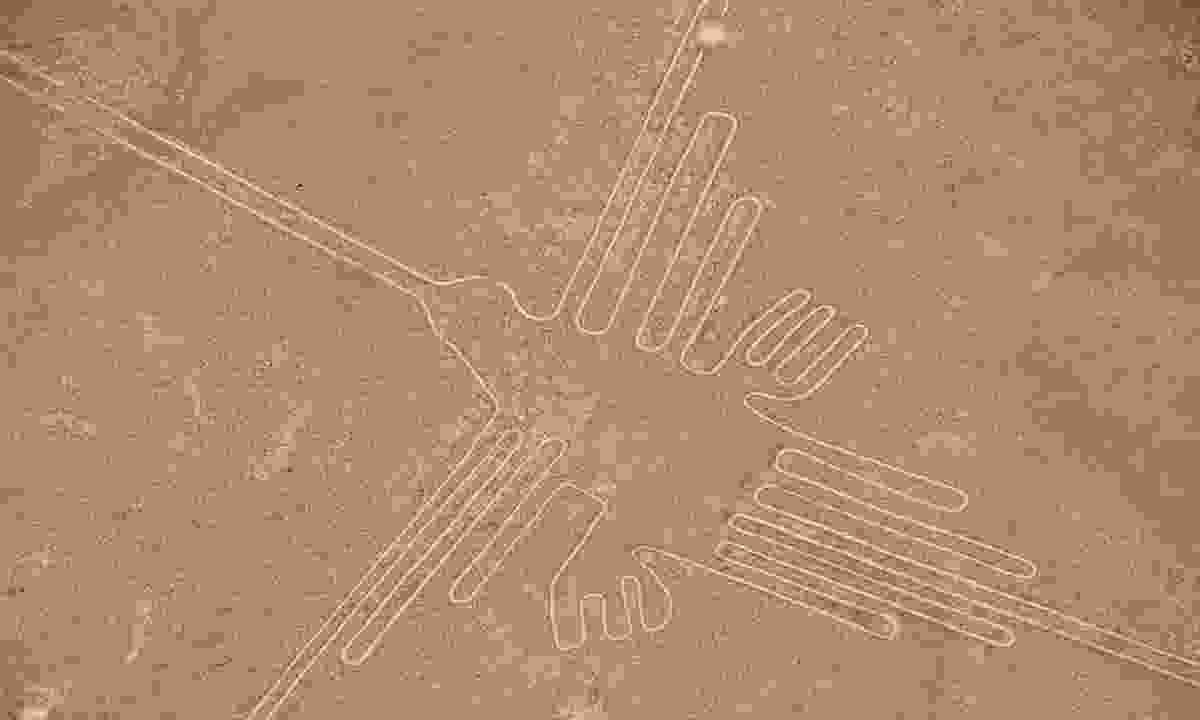 The Nazca Lines are huge, intricate drawings etched on to the barren landscape of Peru’s coastal desert around 400km south of Lima. Enigmatic and mysterious, the figures of people and animals etched into the desert dust have long mystified the experts.

It’s believed that the Nazca people created the lines. They predate the Incas by as much as 2,000 years but Nazca’s extreme environment has minimised erosion and helped to keep the lines intact.

Karl Sagan reckoned they were written by spacemen: take an aerial tour over the site and make up your own mind.

The best things to eat in Peru

Trekking in the Cordillera Blanca