New England is rightly regarded as the world’s leaf peeping Mecca, but there are plenty of other places – close to home and far away – that put on an equally spectacular show... 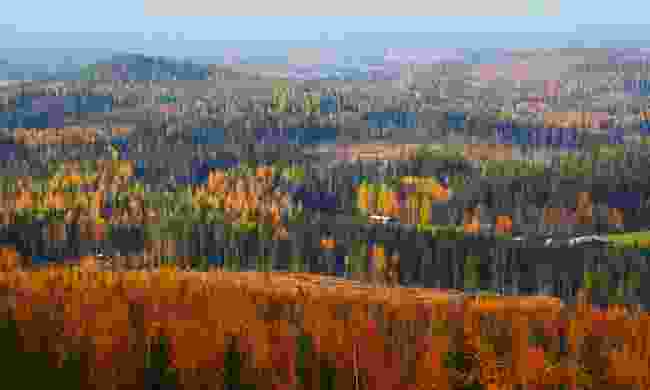 Kilpisjärvi is a tiny village located in the north of Finland on the Norwegian border. This peaceful village is one of the few places in the world where you can enjoy the Northern Lights and ruska (autumn colours) simultaneously, in an area of untamed natural beauty.

Home to Finland’s highest fells, Kilpisjärvi is also one of the best places in the world for Arctic treks. It is a land of untouched wilderness where reindeer herds roam freely beside glassy lakes – perfect for nature lovers and photographers.

Located near the Arctic Ocean, it is also where three countries meet – Sweden, Norway and Finland. 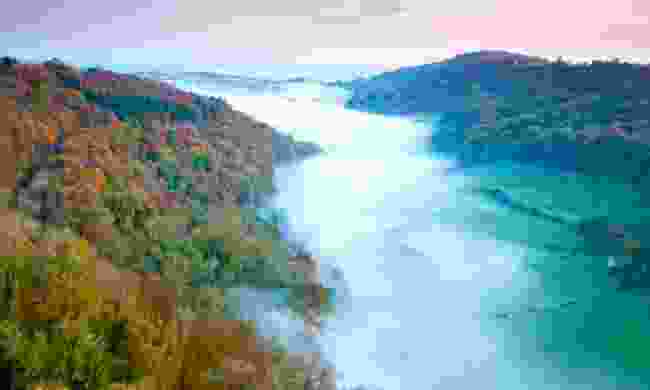 Credenhill Park Wood is a local landmark with historical and environmental importance and is designated a Scheduled Ancient Monument and Special Wildlife Site.

The Iron Age hill fort that is an integral part of the site is one of the largest hill forts in England. It is thought to have been an Iron Age tribal capital. The walk to the top is well worth it, exploring the nature found within the woods along the way.

At the top, you will see views across to Wales. Soak up the autumnal landscape and let your imagination take you back to a time gone by. 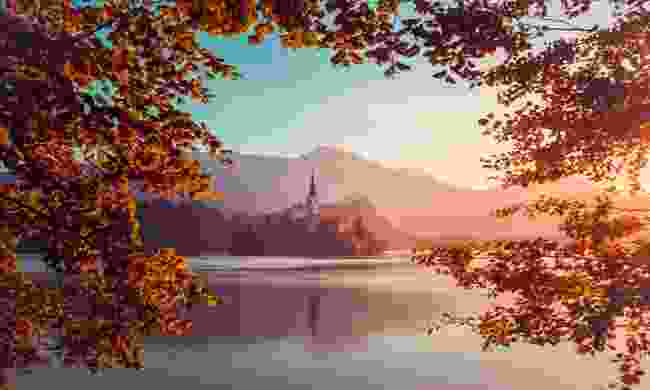 Church of the Assumption on Lake Bled (Shutterstock)

Mystical Lake Bled, overlooked by a Romanesque castle and home to a small island complete with a fairytale church, is picture-perfect at any time of the year. But in autumn, when the trees framing the lake turn all manner of rustic shades, the lake is truly breathtaking.

Get an early start and walk around the lake. Every few steps you’ll stumble upon a captivating vista, inevitably framed by turning leaves. Hire a boat and row to the island to fully appreciate the surrounding spectacle – a truly 360-degree experience. The Big Buddha of Sinheungsa (Shutterstock)

When Koreans think fall foliage, they think Seoraksan National Park, where the leaves start changing colour earlier than anywhere else in Korea. As the weather turns, the entire peak looks as though it’s on fire.

There’s also the added advantage of being able to escape the autumn chill by taking a dip in one of the area’s natural hot springs.

Should you choose to hike up to the spectacular Ulsanbawi peak, make sure you follow the lead of the locals and call by the ancient temple complex at Sinheungsa.

First built in 653, it is home to Tongil Daebul, the Great Unification Buddha that stands 14.5 metres tall. Imposing at the best of times, he looks particularly fetching backed by red and orange leaves. With a number of national and provincial parks in the vicinity including Algonquin, Canada’s oldest provincial park, Muskoka is one of North America’s prime 'leaf peeping' areas. In the autumn months, the trees are ablaze with golden and auburn leaves.

The local tourist board puts out an annual list of Muskoka Fall Colour Routes, mapping out the best roads to take for the most spectacular displays.

But really, the best ways to truly experience the changing leaves is to hike, bike or canoe along one of the many trails that criss-cross the region. An autumn trip doesn't have to be restricted to September to October. From March to April, New Zealand is perhaps the Southern Hemisphere's premier autumn destination. Before the snow descends, autumn provides perfect conditions for exploring New Zealand's adventure-packed landscapes.

Arrowtown, a small pioneer town near Queenstown on New Zealand’s South Island is widely regarded as the best place in the country to see autumn leaves.

The hills are ablaze with colour, the perfect backdrop to the town’s collection of quaint clapboard buildings, many dating from the 1800s. The turning of the leaves is celebrated every April with the boisterous Arrowtown Autumn Festival. 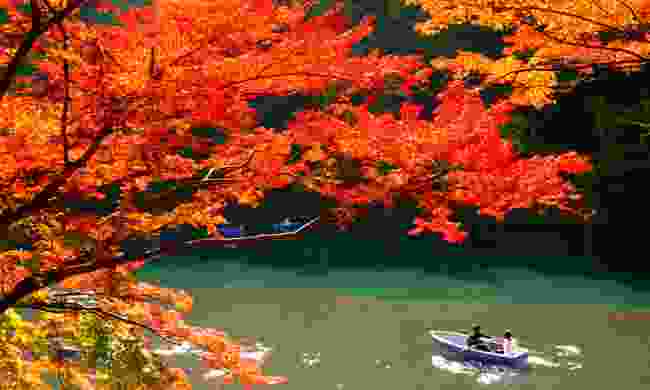 Boaters on lake in Kyoto in autumn (Dreamstime)

The Japanese use the term momijigari to describe a spot of leaf peeping, accompanied by a picnic with friends. And what better place than the beautiful imperial city of Kyoto?

Kyoto is swamped with crisp, red leaves from October to November. Kyoto's ancient temples such as Kiyomizu-dera Temple and Eikan-do Temple are draped in Japanese maple trees.

Make sure you take a boat tour along the Hozu River to sample the splendid autumn hues of the valley. Or better still, hire a row boat and take your own sweet time. While the fall leaves of New England get all the attention, there’s an equally enthralling autumn spectacle happening on the other side of the United States, in the forests of Mammoth Lakes, California.

With mountains and forests painted gold, crimson and orange, this area puts on one of the best shows in the country.

Tucked high in the Sierra Nevada, the elevation of Mammoth Lakes means that leaves start to turn in September and can be seen as late as November. Set against rugged canyons carved by rushing streams, it is something to be seen and best viewed by foot.

Try the Heart Lake Loop. The trail starts at the Coldwater Campground Trailhead and takes in some of the best fall colours, as well as the Mammoth Consolidated Gold Mine. 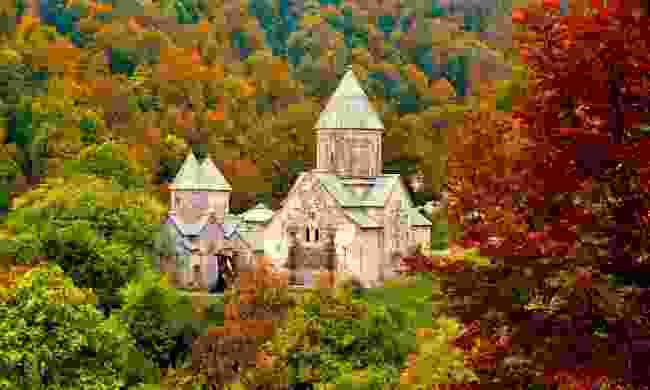 The Haghartsin monastery in a wooded valley near Dilijan (Shutterstock)

Tucked high in forested mountains and surround by national parks, the pretty town of Dilijan is often referred to as the ‘Switzerland of Armenia.’

With pockets of quaint wooden buildings, pleasant temperature and cafes serving coffee and gata (a local pastry), it’s easy to see why. But in October and November, when the leaves of the forests turn spectacular shades of red, gold and orange, it is the famous mountains of New England that spring more easily to mind.

Having said that, neither Switzerland or New England have beautiful 13th century monasteries nestled in their woods. The closest is Haghartsin Monastery, easily reached along a gentle woodland path, just on the outskirts of town. Made from golden stone, it looks picture perfect amongst the autumn leaves.

The best of autumn colours in Finnish Lapland