If it’s winding roads and a riot of autumn colour you’re after, forget the crowded byways of New England and head to these road trip gems in Germany, Japan, Canada and beyond 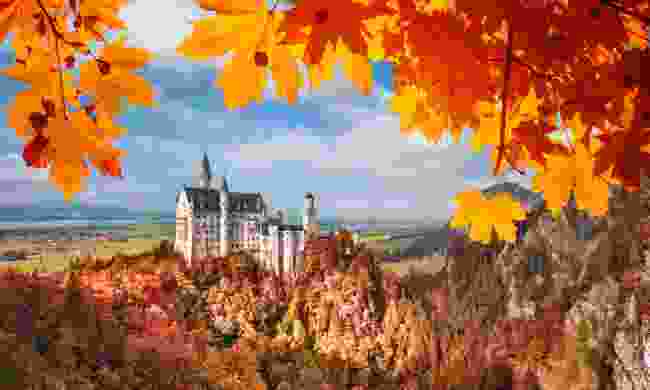 Southern Germany is made for leaf-peepers. It’s a land of alpine forests that dazzle in the autumn, a riot of intense colours framing snow-dusted mountains, fairytale castles and medieval towns.

Road-trippers should head to the fabled Romantische Straße (Romantic Road), a picturesque 360 km route through the forests and mountains of Bavaria and Baden-Württemberg. Beginning in the Franconia wine region, where local wine festivals are common in autumn, you’ll head south through picture-postcard towns like Rothenburg ob der Tauber and Dinkelsbühl, under a canopy of rustic leaves.

The road ends in Füssen, in the foothills of the Alps, near King Ludwig II’s iconic Neuschwanstein Castle. 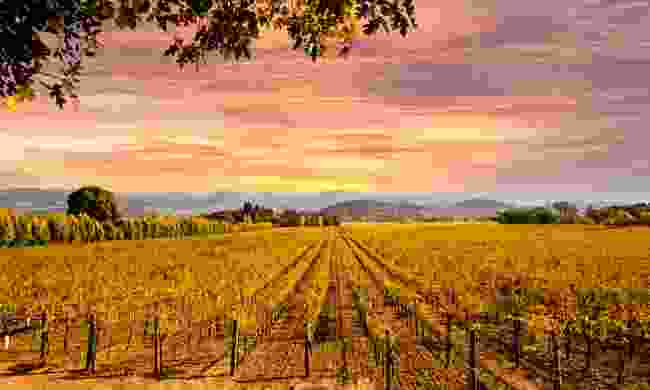 California’s Sonoma County is perfect for road trips. Larger and more laidback than Napa, its more famous sister to the east, it is, as one writer put it, a proper wine region, rather than a wine Disneyland (though Napa's wines and foodie scene are undeniably worth exploring, too).

In the Fall, Sonoma is also a feast of autumn colours. Leaves turn on both the trees and the vines, intensifying the colours and surrounding you with rustic hues.

The best drive through Sonoma Valley is along Arnold Drive, lined by mature oaks and maples. Continue through the Russian River Valley where you’ll hit the vineyards and farms selling squash, adding an extra dash of yellow and orange to the autumnal palette.

Be sure to take a drive up the coast, too, on Highway One. 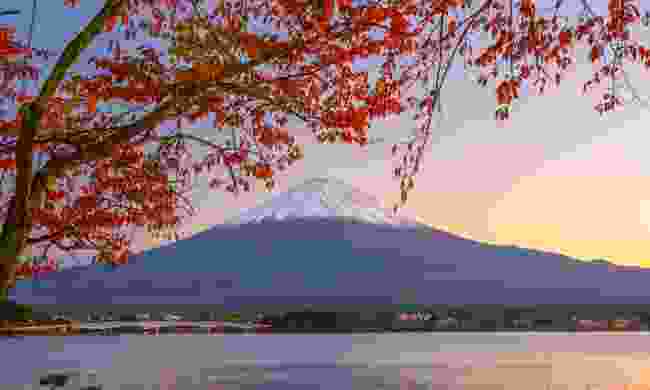 Visit Japan in the Fall and you’ll be convinced that the country was designed for autumn. The ancient temples and shrines look unimaginably perfect against the red and yellow leaves that surround them.

Mount Fuji is at its best in autumn, too. The skies are blue and clear, increasing your chances of seeing its perfectly conical form and iconic cap of snow.

Drivers should head to the toll road that connects Lake Kawaguchi-ko with the foothills of Mount Fuji. A short but spectacular route, you’ll drive through a forest of vivid colours and past five lakes, all the time with the spectacular Japan Alps in the distance. To your side, Mount Fuji is your constant companion on the journey. 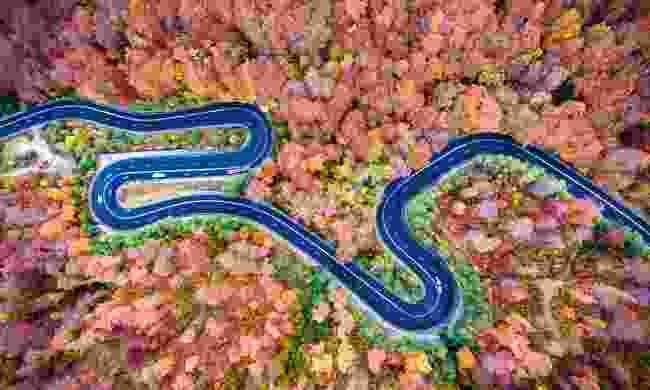 A road trip through Transylvania in autumn is not for the faint-hearted. The legend of Count Dracula permeates the region, especially around Halloween, and the roads present their own particular challenges. Don’t be surprised to round a bend and find an ox-drawn cart blocking your way.

The rewards are immense though. The leaves are amongst the most colourful in Europe and often run up jagged ridges or frame impossibly atmospheric medieval castles.

The icing on the cake, however, is the Transfăgărășan, a 90km drive through the Fagaras Mountains that the guys from Top Gear declared was the best road in the world. Autumn is when it is at its best, a bagful of 90-degree turns and hairpin curves and spectacular vistas of rustic foliage. Keeping your eyes on the road might be a real challenge. 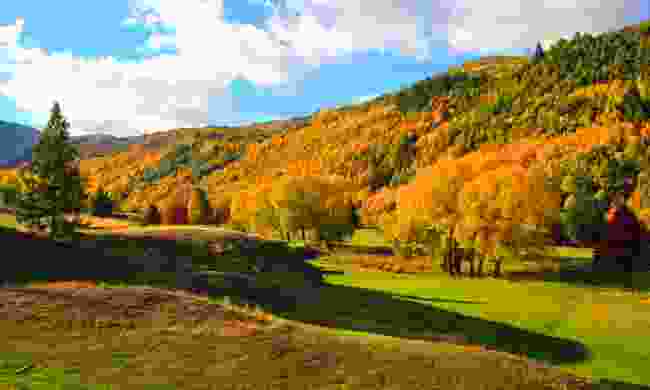 There are two things you need to take into account when you’re planning an 'autumn leaves' road trip in New Zealand: a quirk in the type of trees early settlers planted means that the palette is primarily yellow, and the country is in the Southern Hemisphere, so book your trip for April, not October.

Having said that, the autumn colours here are as spectacular as anywhere else in the world, and the epic scenery adds an extra dash of grandeur.

The historic gold mining town of Arrowtown in Otago on the South Island is the country’s capital of autumn foliage. The hills are ablaze with colour and a lively Autumn festival is held every year to celebrate the season.

The drive to Arrowtown from Queenstown along State Highway 6 is lovely at this time of year, especially with a side trip to Glenorchy. Once you reach Arrowtown, head up the Crown Ridge Road, voted the best road for autumn colours in New Zealand. 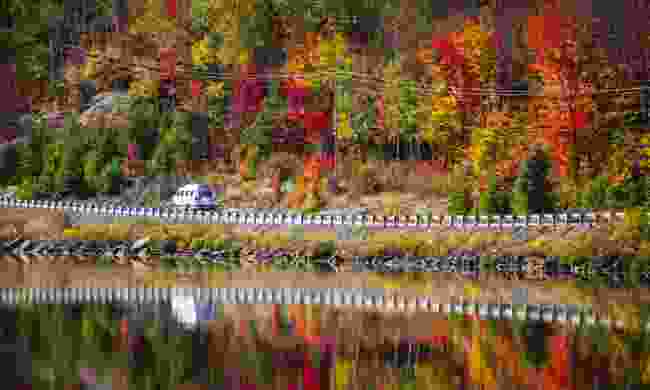 Seasoned leaf-peepers know that when the roads of New England are crammed with tourists looking for autumn colours, there’s a place that is just as beautiful just a little further up the road that is relatively empty. It’s Musoka, in Ontario, a land of lakes and forests where it feels like you are driving through a tunnel of bursting colour.

The Lake of Bays Scenic Drive is the best of the many 'autumn leaves' routes in the region. An 80km loop, this winding route offers spectacular views of lakes, deep rock cuts, and magnificent Fall colours in September and October.

Take time to stop in the charming villages of Baysville, Dwight and Dorset to experience the treats at local bakeries, restaurants and craft breweries. A tour of the lake on a historical steamship also makes a welcome change from driving 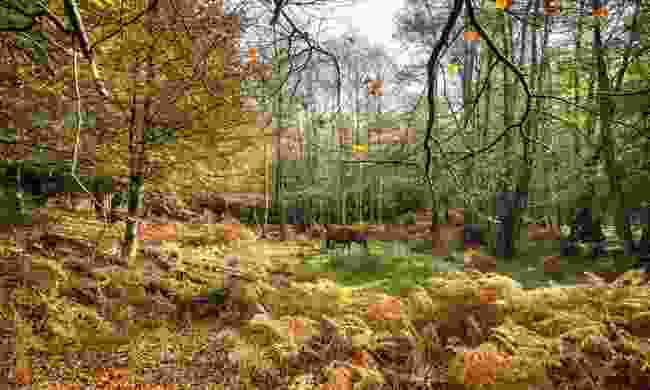 Autumn in the New Forest (Dreamstime)

Autumn is when England's New Forest really comes to life. The woodlands of mighty redwoods, beech, alder and sweet chestnuts transform into a vibrant display of reds, browns and yellows. The park’s famous ponies and pigs feast on the acorns that have dropped from the trees.

There is no real road trip route in the New Forest. The real joy here is turning down tiny country lanes and seeing where they lead you.

Head out of Lymington towards Brockhurst and Beaulieu and see where you end up. Do keep in mind, however, that the ancient medieval right of ‘pannage’ is still practised here. Livestock is allowed to roam freely, so don’t be surprised if you round a bend on a quite country lane and find a cow blocking your way.