From surfing to snowholes, fat biking to hiking, there’s no shortage of things to do in Britain during the winter. Here are 12 outdoor adventures well worth getting wrapped up for 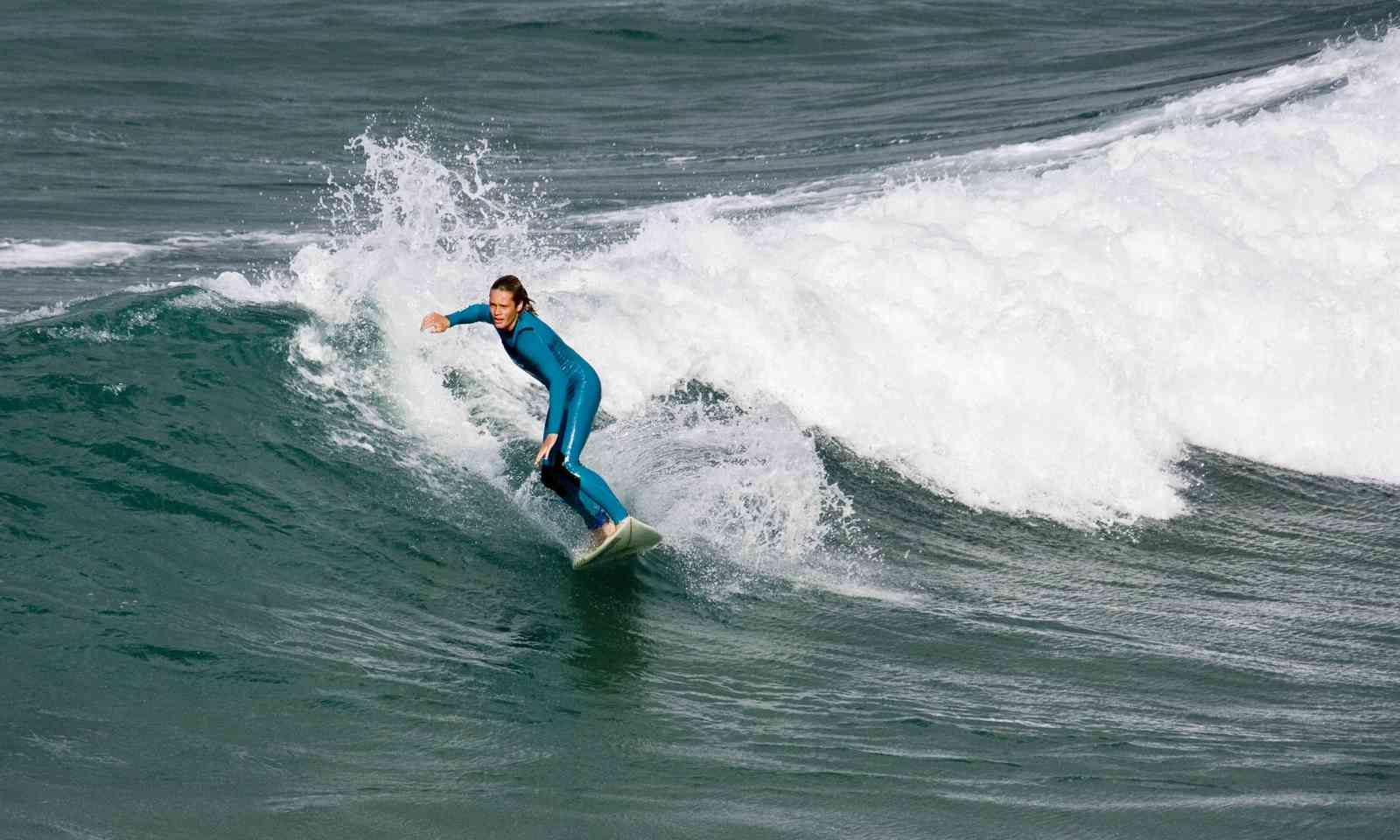 The water may not be as warm as in Bali or Australia, but the English coastline is perfect for catching waves, even in winter. Surfers paddle out in the cold water, even in minus degrees from snow- or frost-covered beaches for winter’s epic waves and fewer surfers to compete with for space. The British coastline gets great waves when the Arctic and Atlantic low-pressure systems build up and surfers can catch their first serious waves in September and throughout the winter months.

Beaches on the south coast, such as those at East and West Wittering are good surf-friendly spots, with smaller waves than on the Atlantic coast and surfing clubs offering lessons to beginners.

Experienced surfers might want to check out the Atlantic coastline around Cornwall and Devon, with wild waves perfect for rides and tricks. Saunton Sands in Devon is a great alternative for longboarding, where you might find yourself and your mates alone on the beach.

If you prefer a more sociable scene, Croyde Bay, is one of the most popular surfing destinations throughout the year, with surfing lessons, rentals and a lively village for food and hanging out in the evening.

2: Sleep in a snowhole in the Cairngorms 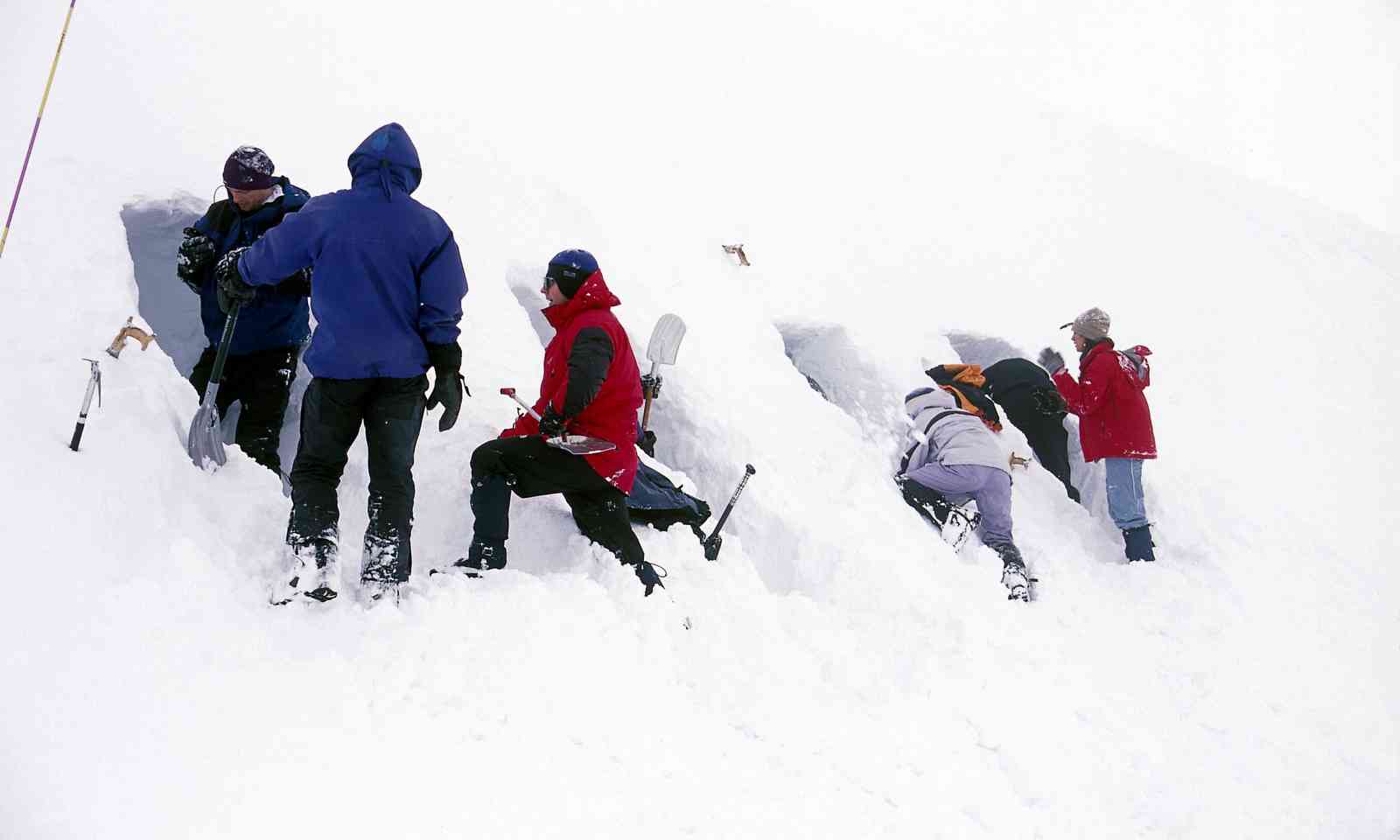 You’ll find more creature comforts and arty sculptures in an Ice Hotel on a Northern Lights adventure. But with a snowholing and mountain walking trip in the Scottish mountains in Cairngorms, you’ll have the satisfaction of making your own ‘home’ for the night.

The trip starts off with winter skills training and a hike to CairnGorm’s summit. Then, after a second comfy night at the Fraoch Lodge, the more challenging expedition begins.

Prepared for a night in the mountains, hikers head out in the windy and snowy landscape carrying a 10kg rucksack. After a five-hour hike, it’s time to start digging and slicing in the snow with shovels to create a shelter for the night. Only when the hole is big enough to fit the entire expedition team are you able to take off your wet gloves and relax.

After a night wrapped up inside a warm sleeping bag, waking up in a warm, quiet and candle-lit snow hole that you built and stepping out into the incredible views of Caingorms National Park is a memorable experience.

3: See the many different sides of Snowdon 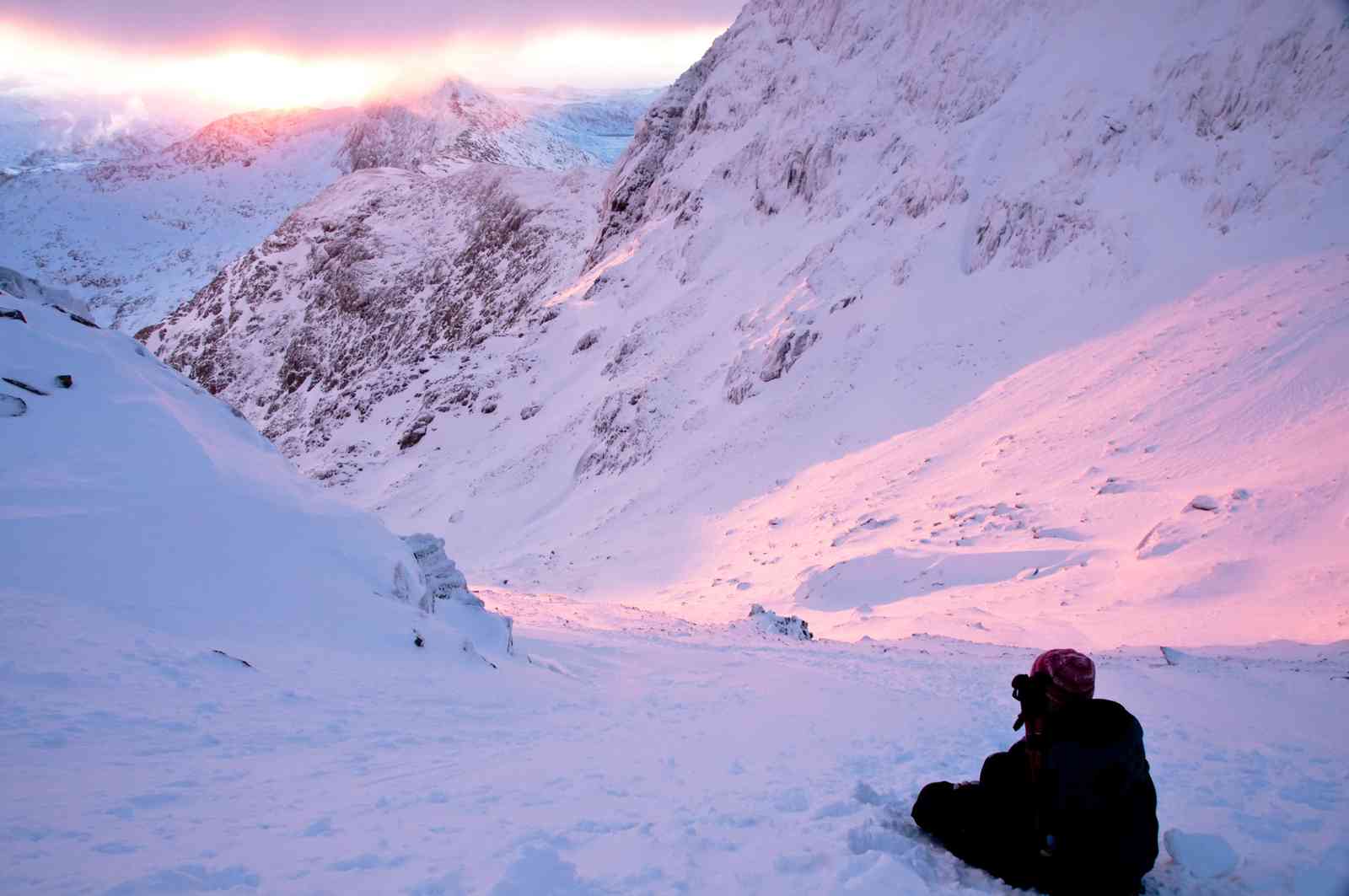 Mount Everest climber Edmund Hillary was drawn to Wales’s highest mountain and he isn’t alone. Snowden is one of the most popular mountains in the UK.

With six routes to the 1,085 metre summit, it’s possible to take in different views of glacial lakes, cliffs and surrounding villages.

On the north slope is the Llanberis Path, to the west are Snowdon Ranger and Phyd Ddu Path, while to the south are Pyg Track and Miners Path. The final path, Watkin Path, is on eastern slope. Since you don’t have to descend the same way as you came up, you might want to hike the most challenging route Watkin Path first and then take an easier path, such as the Miners’ Track that passes abandoned quarries, on your way down.

All routes are between seven and nine miles, so prepare for a full day of hiking, with no cafés on the summit in winter time. Bring warm clothes, a map and compass, food and water.

If you want to learn how to hike safely on rocky, icy summits and snow slopes, join Snowdonia Adventures for a course in essential winter mountaineering skills.

The Fens has several spots, especially across Cambridge and Lincolnshire, that become a skating paradise when temperature drop and big flat areas turn into natural rinks. Locally loved skating areas include flooded meadow ‘Bury Fen’, between the villages of Earith and Bluntisham, the flooded field north of Whittlesea known as ‘Whittlesea wash’ and the washes between the two rivers, known as ‘Welney wash.’

Make sure you bring some hot drinks and sandwiches for the brisk day out in a remote area. The Welney Skating Association can provide a pair of skates, if you are lucky, but as their stock is limited, a safer bet is to bring a pair.

With supersized tyres designed for riding on bogs, sand or even snow, a fat bike can open up landscapes to bikers - from deserted beaches, snow-covered woodlands or fast downhill mountain slopes - that might otherwise feel too dangerous or tough on a normal mountain bike.

You might want to rent a bike and go for an adventure on your own in, for example, the woodlands around Aviemore. But you could also join a fat bike tour on the coast of North Berwick. The seaside town is just 30 minutes from Edinburgh, with clifftops and bays that are peaceful and quiet at this time of the year when most tourists and locals are indoors. 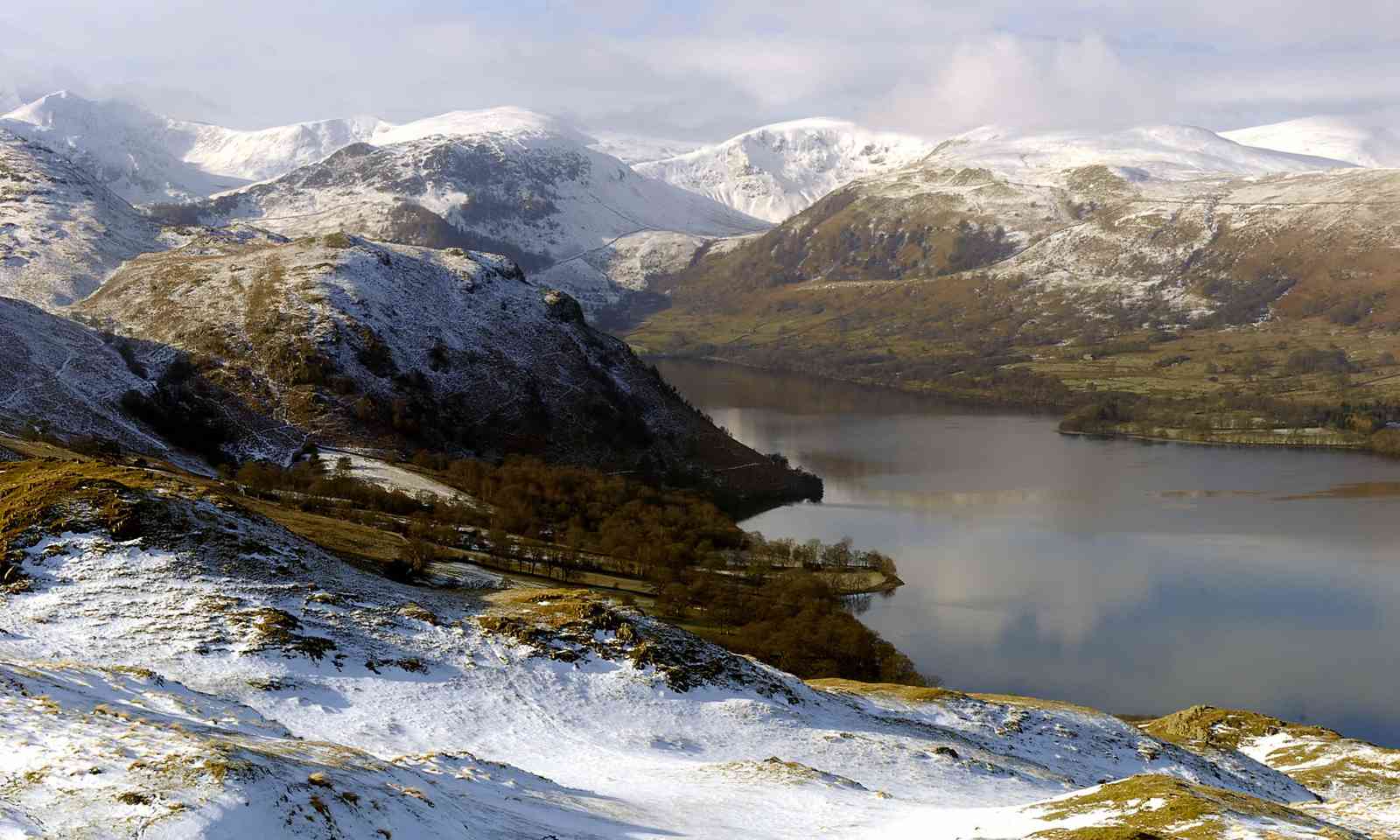 In winter, you won’t see the daffodils that inspired William Wordsworth’s most famous poem. But the Lake District is a lovely area for an intensive long hike or a few days of gentle strolling at this time of year. There are fully marked routes to choose between and fewer other hikers around to break the peaceful silence.

You might want to start in Glenridding and take the remote, hilly and rocky route to Howtown that Alfred Wainwright described as “the most beautiful and rewarding walk in Lakeland.” The path is 6.5 miles long and along the way you’ll pass fields, a pier and get a great view over Ullswater and the islands.

For a shorter walk by the lake shore, passing a waterfall, stone arch bridge and ancient trees, the route from Aira Force to Glenridding is a great alternative.

There are four main paths in the Ullswater Valley from Patterdale on one side of the lake to Pooley Bridge on the other, with buses and steamers that tie into the routes, so you can split the routes into shorter sections. The four paths were also recently connected to create a circular 21-mile Ullswater Way around the lake, which passes farmlands, the Maiden Castle and Watermillock Church. If you take a few detours along the way you get a great view of the 16th century Lyulph’s Tower from the Memorial Seat and the large stone circle ‘Cockpit’.

7: Get speedy on a sand yacht

You don’t need a driver’s license to get behind the wheel of a sand yacht and speed along Northern Ireland’s seashore, powered by nature. Even eight-year-olds can drive the hand-steered, three-wheeled little vehicle, that’s like a go kart with a sail.

When sunbathing is out of season, blokarting, sand yachting or land sailing becomes even more tempting with fewer people on the beach to crash into.

The average beginner’s speed is around 15-20 miles per hour, but that can more than double with a bit of training. The American blokarter who set the record reached 117mph.

Make sure you bring a windproof jacket and proper shoes. Flip flops might be perfect for a summer day at the beach, but steering the kart on the beach at Benone, Tyrella, Murlough or Cranfield requires better gear, especially if you want to join the Blokart school Blokart World.

8: Hike to the summit of Pen-y-Fan 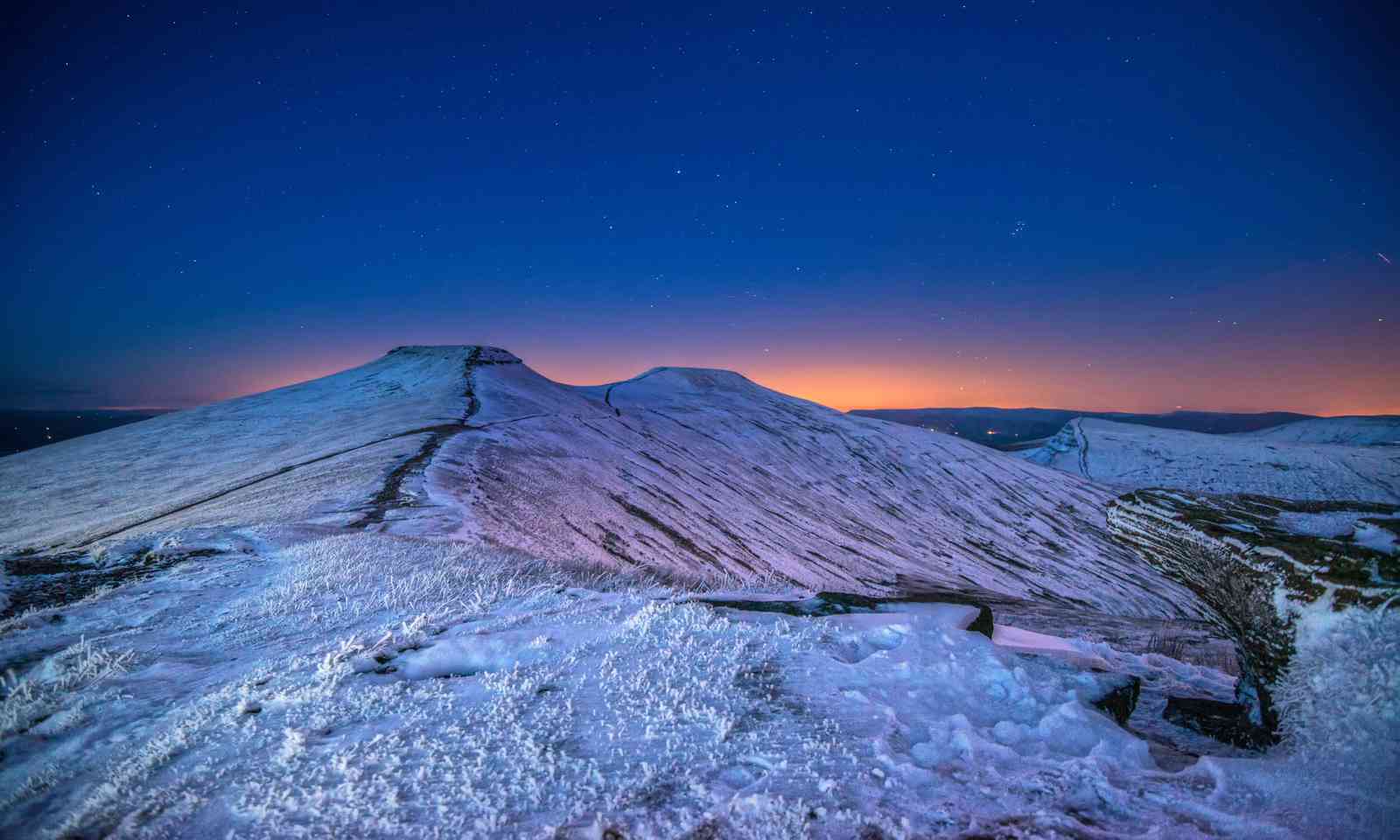 The highest mountain range in southern Britain, the Brecon Beacons is a great alternative to Snowdonia in the north, with multiple ascents to the red sandstone peaks. The landscapes here are varied; you can pass waterfalls, rivers, neolithic stone circles, Norman castles and valleys along the way.

When the first snow arrives, experienced hikers can start at the Storey Arms car park and head up the challenging route that leads to the summit of Pen-y-Fan in the heart of the National Park. Most hikers strive to reach its flat top with the Bronze Age burial cairn.

Just next to Pen-y-Fan is its twin summit Corn Du, so if you’re feeling energetic or staying for more than a day, you could conquer the twin peaks.

9: Climb trees on the Isle of Wight 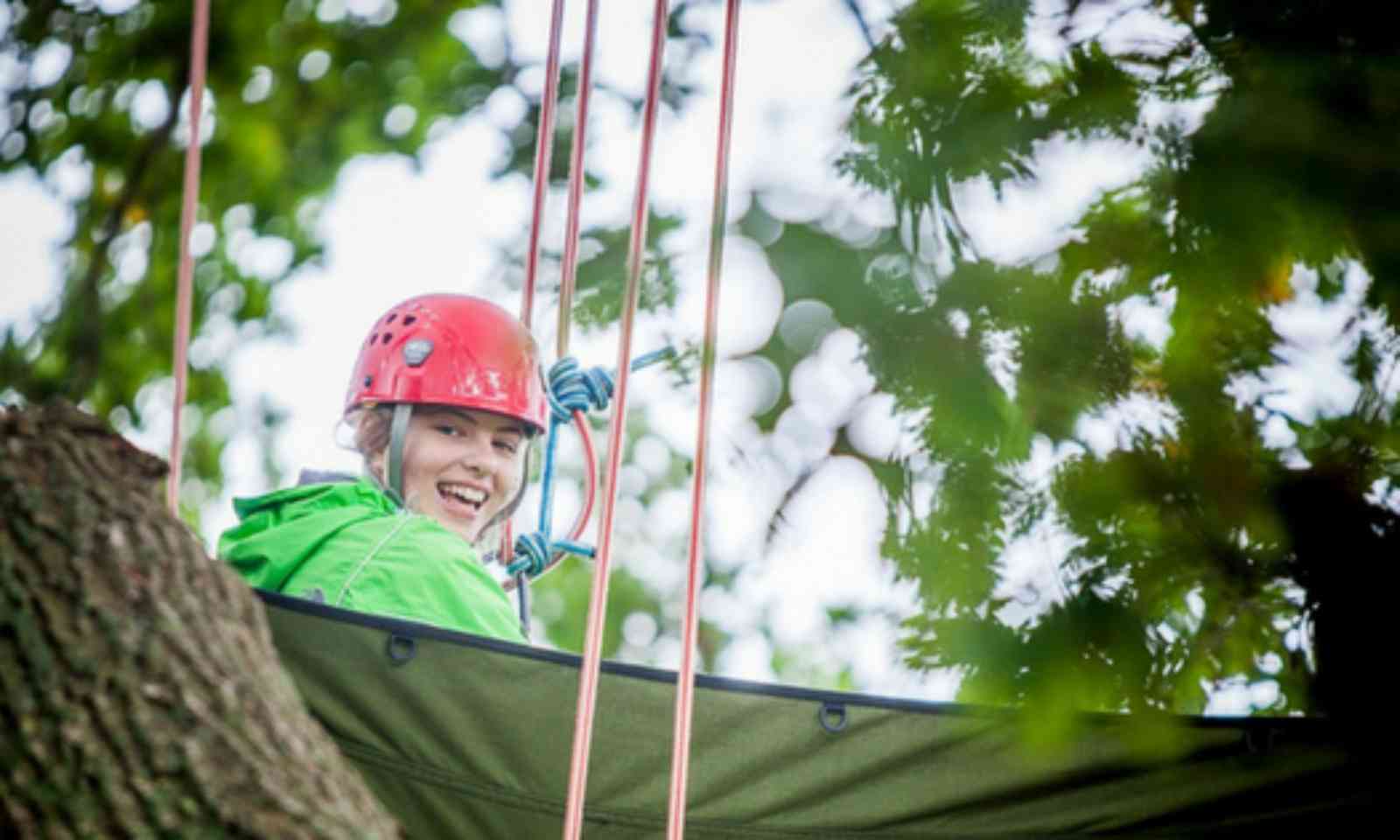 If you want to start the New Year at the top, you might want to catch the ferry to Isle of Wight, where even cautious adults hang upside down in a 22-metre high tree. Kids aren’t the only ones who enjoy climbing in trees, so, with red helmets and harness on, eight to 80-year-olds ascend the impressive mature trees in one of the island’s great parks, next to the beach.

Only 20 minutes walk from Isle of Wight’s ferry is Appley Park, a great playground for competing with your mates over who can reach the canopy first, finding different paths up the trunk or embracing the view over Solent and beyond from one of the hammocks in the canopy.

10: Get your skis and snowboards on in Scotland 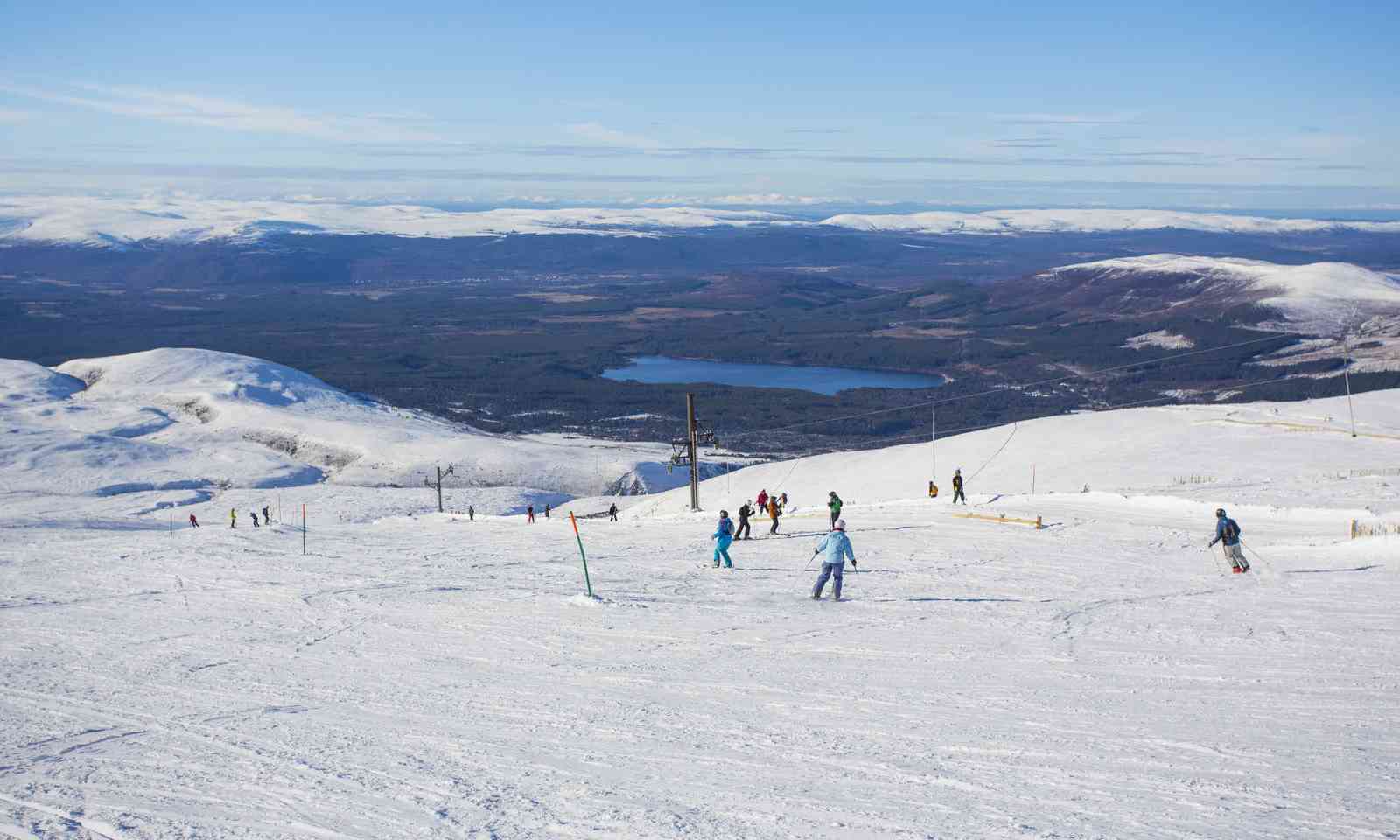 Scotland has the UK’s finest downhill action. Nevis Range Mountain in The Highlands has 35 ski runs and crosses the 1,344-metre Ben Nevis, Britain’s highest mountain, while Glencoe Mountain range has 20 runs and CairnGorm mountain has 23.

CairnGorm mountain is actually the most popular ski resort in the country, located in Britain's largest National Park, the 1,400 square miles Cairngorms National Park, between Perth and Iverness. The ski resort has Britain’s highest funicular railway, the only one in Scotland, and pistes for all levels from the top station to the base.

You might want to spend the day practicing tricks and freestyling in the Cairngorms’ fun park, or feel the air pinch your cheeks as you glide down the slopes. Nine of CairnGorm’s runs are more suitable for experienced skiers or snowboarders, while those who want to learn or develop their skills can join the Snow School for classes. 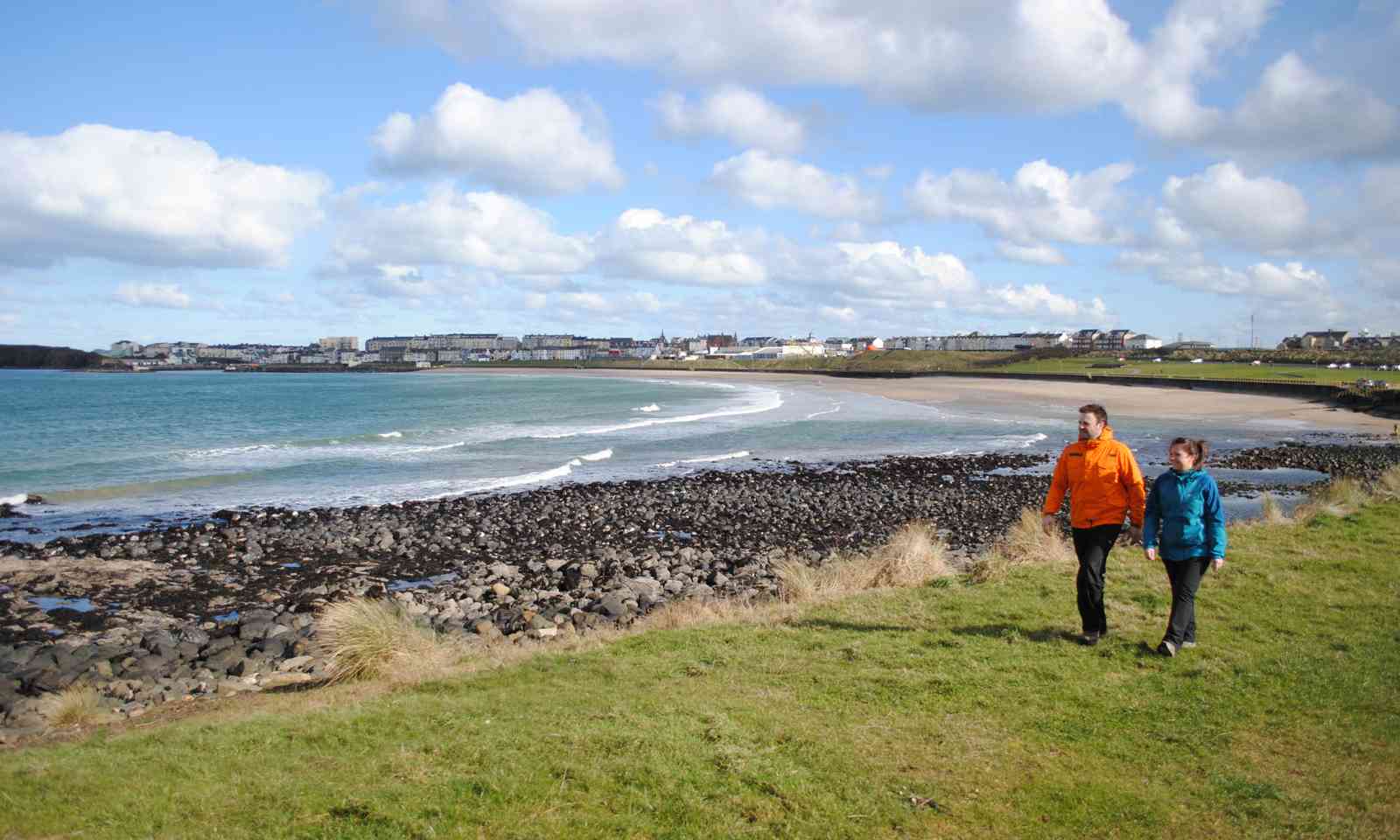 The Port Path between Portstewart and Portrush in County Derry, Northern Ireland, is a beautiful place to take a walk in winter. On a clear day, you can see Donegal and the Scottish Isles over the sea along the 6.5-mile trail that follows the coastline. If you bring a towel and a change of clothes, you might also be tempted to take a refreshing dip in the old natural swimming cove, Portnahapple, though it’s likely to be on the chilly side.

The path starts close to the beach on Strand Road. Along the way is St. Patrick’s Well, which locals used to store holy water in during the Stone Age. The historical small stone houses with turf on the roof are also worth a look. Northern Irish men used these houses to store ice in during the winter, so they could preserve salmon when temperatures rose.

Named after the region in Norway where it originated, Telemark skiing combines both Alpine and Nordic skiing, for those who look both for a workout and downhill action on the slopes. It takes a while to get the hang of, but with lighter and different gear, telemarking means being able to travel up and downhills, a great way to explore off-piste, wintry backcountry and get remote, as well as, of course, enjoying racy descents.

Telemark is popular in Norway and even in the leanest of winters Norwegians take long, gliding turns down the mountain slopes, often without poles. In Britain, the Scottish CairnGorm Mountain, one of three ski centres in Cairngorms Nationals Park, is the place to make your (tele)mark. The mountain is located on a higher altitude and inland, which helps create the right conditions.

Main image: Hiking in the snow on the Brecon Beacons, Wales (Dreamstime)