Winding through the mountains of central Japan is an ancient walking route: the Nakasendō Trail. Walk or cycle part of this route connecting Kyoto and Tokyo for a glimpse of an older Japan...

Winding through the mountains of central Japan is an ancient walking route: the Nakasendō, or Central Mountain Road. Walking or cycling part of this 534 km route connecting Kyoto and Tokyo gives you a glimpse of an older Japan.

Some rural stretches of the Nakasendō remain unpaved, or still have the cobblestones walked by pilgrims, peddlars and princesses centuries ago. The Nagano and Gifu section offers horizon-breaking mountain views, and a chance to rest at the region’s charming post towns.

Here are four post towns well-worth stopping off at... 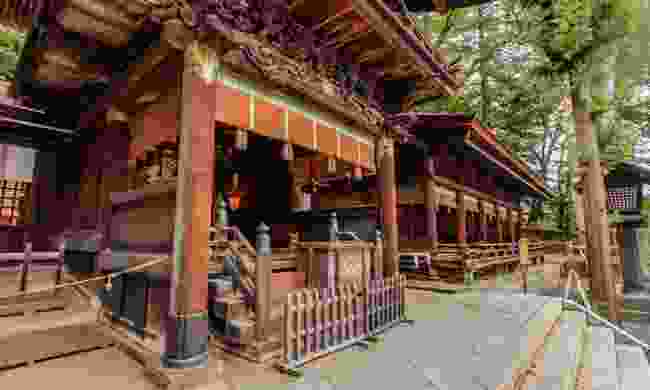 The 29th station on the Nakasendō, Shimosuwa-shuku is a vital stop between the Wada and Shiojiri mountain passes. The precipitous 20km path from Wada-juku is one of the trail’s hardest sections, so weary travellers through the centuries must have felt great relief on spotting shimmering Lake Suwa as they descended from the mountains.

Stopping here meant a soak in mineral-rich onsen waters – it’s the Nakasendō’s only post town with natural hot springs. Today’s visitors can soak in nine public onsen, or stop at free footbaths dotted along the roadside, and local inns usually have hot-spring baths for guests.

Honjin Iwanami House, once a samurai residence, is one of the town’s grandest buildings. Visitors can contemplate the traditional garden, explore the Edo-era (1603–1868) house, and try on a kimono in the exhibit on the town’s historic silk industry. Other Edo-period buildings open to the public include the History and Folklore Museum and Fushimiya-tei cultural exchange centre.

Five minutes’ walk north of Fushimiya-tei is Jiun-ji, approached via a verdant stone path carpeted with moss. This Buddhist temple was founded around 1300 to protect nearby Shimosha Harumiya, a serene lower shrine of the important Suwa Shinto shrine.

Shimosuwa-shuku has developed many delicacies to tempt the tired traveller. Sweet and salty shio-yokan, made with red beans and agar, is one popular snack, sold at the traditional confectioners Shintsuru alongside mochimanjū (sweet rice cakes). Another local favourite is unagi, grilled eel with a rich sauce, perfect fuel for tackling the next part of the trail.

Explore further: Lake Suwa is encircled by a 16 km promenade, perfect for cycling, and with views of Mount Fuji from Mizube Park on the northern bank. In late January you may witness the phenomenon of omiwatari, when the ice covering the lake cracks dramatically, said to be caused either by a dragon, or by two gods meeting on the lake. 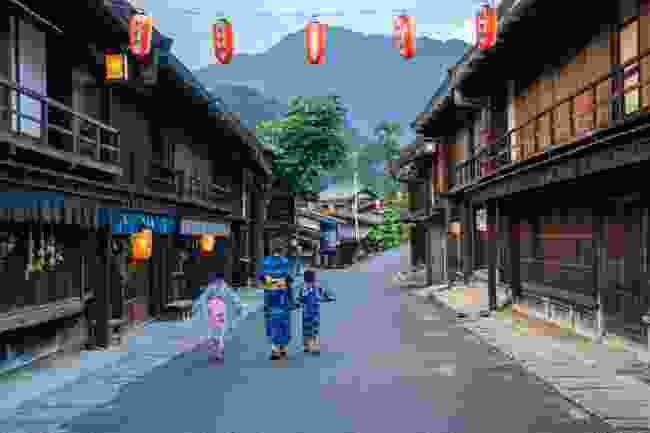 Even before the Nakasendō was established in the 1600s, the Kiso Valley had a well-known walking route: the Kisoji, which traces the Central Japan Alps for 70 km. Tsumago-juku is the 10th station on this ancient path, and visiting it today feels like you’ve stepped back through the centuries.

The town’s post road – on which cars are banned during the day – is lined with wooden houses, most of them originally built in the eighteenth century. It’s hard to believe now, but in the 1960s most were falling into ruin. Through a great collective effort from the locals, the historic houses were restored, becoming a Nationally Designated Architectural Preservation Site in 1976.

Tsumago-juku is a living town, not a museum, so escape the crowds and have a more authentic experience by visiting off-season. Stay the night to experience Tsumago at its atmospheric best and speak to the traditional inns’ owners. Many locals are still deeply involved in the town’s preservation, and passionate about protecting it for future generations.

A short hike north of town is the old castle site. Pick up some gohei mochi (moreish grilled rice cakes with a sweet miso sauce) to give you energy for the climb, then just sit and enjoy the view of this much-loved town luxuriating in its forested valley.

Explore further: As well as following the trail to Magome-juku, you can take the 3.5km route north of Tsumago to Nagiso, where you’ll find the nearest train station. It only takes about an hour on foot, and also makes a pleasant cycle, passing through small villages and rural areas. 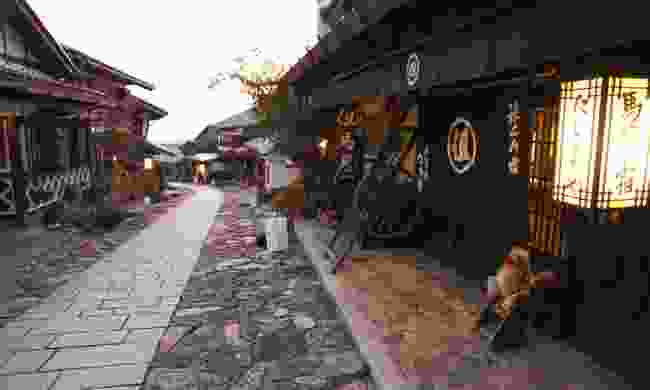 Around 90 km northeast of bustling Nagoya city is Magome-juku, the final station on the Kisoji. It’s a gentle eight kilometre walk or cycle south from Tsumago-juku, along a well-preserved section of the old trail.

Where Tsumago feels atmospheric, Magome is genteel. Its main street is marked by perfectly tended foliage and picturesque photo spots, such as the mill wheel at the sloping street’s southern end.

The town is very popular with tourists, its domestic fame bolstered by its link to writer Shimazaki Tōson (1872–1943). His novel Before the Dawn opens with the famous line, “The whole of the Kisoji lies in the mountains.” You can learn more about him at his birthplace, the local honjin; once an inn for government officials, it now houses the Tōson Memorial Museum. Other restored buildings contain more museums, tea shops and inns.

As with Tsumago-juku, you’ll see more of the town’s charms if you stop overnight. You can even stay at the temple of Eisho-ji, which serves delicious shōjin-ryōri (Buddhist vegetarian cuisine) featuring local ingredients. Sansai soba (buckwheat noodles with mountain vegetables) are on the menu at many local restaurants, and chestnut products like kirikinton (candied chestnuts) are popular snacks.

Explore further: The Tsumago–Magome trail winds through lush forest, past cooling waterfalls, and along roads with sweeping mountain views. Most hikers and cyclists start in Magome, tackling the steep ascent between Magome village and Magome Pass first, then pausing at the welcoming teahouse with a traditional irori (sunken hearth). 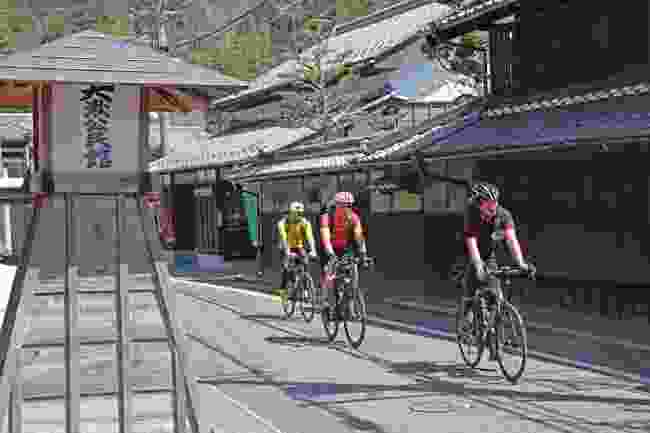 On a particularly mountainous part of the Nakasendō, about  30 km southwest of Magome, is the quiet post town of Ōkute-juku. In the 13km between Ōi-juku, the 46th station, and Ōkute you have to tackle no fewer than 13 hills, largely on unpaved paths.

Your efforts are well rewarded with a stay in this peaceful town, though. There are several historic buildings, including the recently restored Marumori House, and even a kōsatsu at the south end of town – an imposing Edo-era notice board for displaying laws and edicts from the feudal government.

Other interesting sights include picturesque Munemasa Temple and Ōkute Shinmei Shrine, both originally built around 1600. Sadly the shrine’s 1300-year-old cedar tree was uprooted in a storm in 2020, a great blow to the residents of Ōkute. There are plans to preserve part of it.

Everyone from warlords to merchants used the Nakasendō to travel between the imperial capital of Kyoto and the political one of Edo (now Tokyo). In 1861, Princess Kazu stayed in Ōkute on her way to marry Shogun Tokugawa Iemochi. Unsurprisingly her retinue was grand, and progress was slow – the little town somehow hosted over 30,000 people as part of the procession.

In spring and summer, sansai tempura is a favourite local dish for refuelling after tough mountain walks. Wild vegetables like butterbur and bamboo shoots – often foraged nearby – are coated in a light batter and fried, usually served with refreshing soba noodles.

Explore further: Between Ōkute-juku and the 48th station (Hosokute-juku) is Japan’s longest cobbled road, at Biwa Pass. About 0.6 miles (1km) long and blissfully traffic-free, it makes for a bumpy but beautiful bike ride. Also on this section is the idyllic Benzaiten Pond, a quiet spot dense with irises blooming in early summer.

Uncover more of the Nakasendō Trail

Start planning your journey along the Nakasendo Trail. The official website has loads of information and inspiration on various routes to take, things to see and do along the way, where to stay and eat, and much more.