Friuli Venezia Giulia: An undiscovered treasure in the north of Italy and why you should explore it

Friuli Venezia Giulia is a country blessed with golden stretches of Mediterranean coast, the peaks of the Dolomites and Alps, Roman relics, tasty prosciutto and Europe’s grandest square...

Just a few kilometres north-east of Venice lies an undiscovered, captivating region bursting with cultural, natural and culinary experiences. Friuli Venezia Giulia is a safe and uncrowded country blessed with a rich variety of wide open spaces ranging from the Dolomite's arch and the wild emerald rivers to the golden stretches of Mediterranean coast and the rolling vineyards. Within these landscapes you'll find Roman relics, the best prosciutto you’ll ever taste and Europe’s grandest square. The region is gloriously crowd-free and even the urban areas remain pleasantly peaceful. It’s uncrowded Italy at its finest: a wild yet cultured borderland as satisfying as its crisp white wines. Here is why you should visit…

1. It's bursting with culture

Few cities have grander squares than Trieste. Flanked by magnificent palazzi, the huge seafront Piazza Unità d’Italia dates back to when this was a port for the Austro-Hungarian Empire. Locals, irritated at the excess, dubbed its Palazzo del Municipio the “Cheba” (Bird Cage) when it was built; now it’s considered one of Italy’s greatest palaces.

To the north, Gorizia shares its old square with neighbouring Slovenian town Nova Gorica. They was once one municipality, only to be split between Italy and former Yugoslavia after the Second World War. The wall separating the two was torn down in 2004, but its outline remains as a reminder. Now the pair share a square and the European Capital of Culture title for 2025.

Nearby, the medieval cliffside towns of Gemona del Friuli and fortified Venzone are like walking into history. Festivals such as Gemona’s Tallero Epiphany, a tradition handed down since medieval times, still dominate local life, while the discovery of some 40 mummified remains in the tomb of Venzone’s cathedral makes for one of Friuli’s more intriguing museums.

A half-hour drive south lands you in Udine, a town of Venitian charm and ancient wonders. Don’t miss the Piazza Libertà, dubbed the most beautiful Venetian square on the mainland. From here, take a walk to drink in the site of the colourful historical buildings before climbing up to the town’s hilltop castle for panoramic views. Similarly, the riverside town of Pordenone also offers visitors a glimpse into the past and a walk of its cobbled old town reveals historical buildings and frescoes as well as a modern art and cultural scene.

But the region’s most remarkable finds are seen in the UNESCO-listed ancient towns of Aquileia and Cividale del Friuli, where the remains of the Lombard Kingdom, which disappeared in the 8th century, can still be viewed alongside relics of Roman grandeur.

Some of Italy’s finest white wines are produced in the Friuli region. The reason is location. Huddled between the Alps of the north and Adriatic to the south, cool winds moderate the sunny weather while calcium-rich marlstone soils give the grapes their strong mineral notes. The result is some beautifully crisp whites.

There are four main wine regions here to discover, all in the south where winemaking in the hills of Collio and Colli Orientali del Friuli dates back to Roman times. The largest winemaking area is the Grave del Friuli, which almost runs the length of the region, while Carso, in the hills above Trieste, is best known for its heroic winemakers and some of the best orange wines of the region, together with Oslavia in the Collio DOC area.

Their vineyards make for great days out. Family-owned boutique wineries are common, with many offering cellar door visits. Cycling tours let you discover more than just the vineyards, however, as you pedal the countryside in peace.

Friuli is border country. Germanic and Slavic influences are seen not just in its traditions, but in the food lovingly prepared here. Dishes such as the Balkan-influenced pepper-and-aubergine sauce avjar, the strudel-like struccola de pomi, or jota, a German-style sauerkraut and bean stew common to the borderlands, wear their cultural influences lightly.

But what makes Friuli so special is its unique DOP produce. The alpine north is celebrated for its cheeses, particularly Montasio, which is often fried with potatoes to make frico, an addictively cheesy crisp. Similarly, the groves above Trieste are renowned for their Tergeste olive oil, while the Tagliamento riverlands produce some of the best prosciutto in Italy at San Daniele – a sweeter cured meat than the more famous Parma ham. All are worth trying at least once.

4. You can get up in the mountains

The great Southern Limestone Alps dominate the northern half of Friuli, spilling the borders of Austria and Slovenia across dozens of ranges, including the Dolomites and Carnic, Carinthian and Julian Alps. These are home to some of the most dramatic hikes in Western Europe.

To the east, the Julian Alps give way to dozens of beautiful lakes, often wrapped by fir collars of gently swaying pines. Fusine Lake is especially grand, its clear, glacier-formed surface reflecting the image of Mount Mangart in its waters, as trails lead off into the forested hills.

To the west, the Dolomites dominate the agenda of hikers. Summer here sees ibex and chamois skitter the slopes as golden eagles soar overhead. Via ferrata let you access the higher trails, but if you’re not comfortable with climbing, long day hikes such as the Three Peaks offer thrilling highs without the need for carabiners.

Then, as winter falls, there’s a whole other side to Friuli’s mountain country. Skiers and snowshoe hikers find their fun on the slopes, but in the forests and plains of Fusine, beneath the foothills of the Julian Alps, you can go dog-sledding through the frozen pines. It’s thrilling.

5. Friuli is perfect for exploring on two wheels 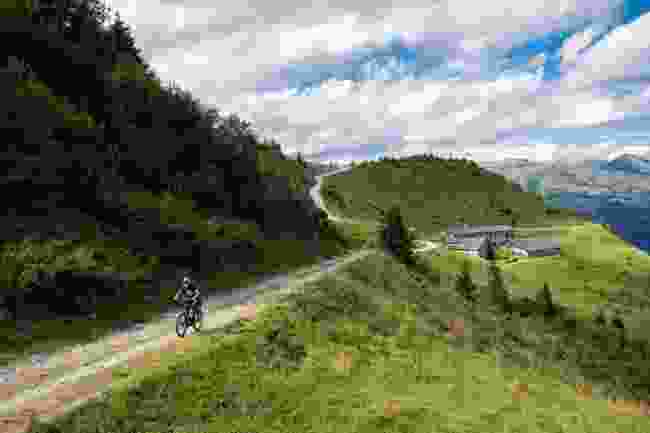 It’s little surprise that a region so varied in its terrain has become a favourite among cyclists. You’ll even find a few of the more infamous mountain stages of the Giro d’Italia here, including the gruelling climb up Monte Zoncolan, past Sauris, the highest village in Carnia.

Those attempting mountain roads can always go by e-bike, which opens up swathes of the hilly north. If not, mountain bike is the best way to get around, with the Val Venzonassa Trail (32km), in the Julian Pre-Alps Park, one of the more beautiful routes, as you roll through high-alpine pastures and medieval villages.

There’s plenty of multi-day challenges for those who want to stretch out their trip. The Alpe-Adria cycle path spans 415km from Salzburg, Austria, to Grado in the far south of Friuli. Break it up for some dramatic day rides, with the last 20km between historic Aquileia and Grado soaring over lagoons and the historic Barbana Sanctuary.

6. There are so many outdoor adventures you can have in nature

Beyond the mountains, there is boundless countryside to explore. Friuli is one of the least populated regions of Italy, and at times it seems like its forested valleys, rivers and plains stretch on forever.

Nature reserves range from the subterranean rivers of Trieste’s Reserva Natural Van Rosandra, where the porous karst plateau leaches all the rainfall underground, to the lagoons and birding wetlands of Grado, filled with wild Camargue horses splashing around the marsh.

The coast makes for fertile wildlife watching. In the waters off Trieste, at the foot of Miramare castle, a marine reserve offers incredible wild encounters. Snorkelling trips with WWF (World Wildlife Fund) guides in the summer can see you surrounded by schools of white sea bream and colourful damselfish in an area normally off-limits to swimmers.

Or head north to the beautiful Lake Cornino, an area that was set aside to help injured birds of prey recover. Between old cobbled villages and the first rocky inklings of the Carnic Alps, there’s plenty to explore.

7. It’s an exciting time of year whenever you visit 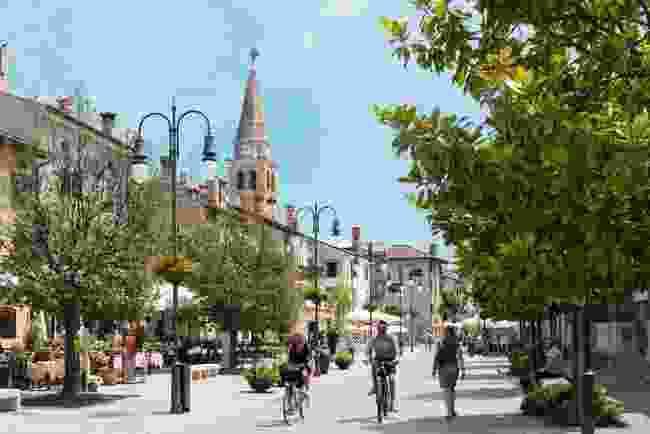 There’s plenty to do in every season. Spring and winter see migratory birds arrive on the island of Cona, while carnival season is in full swing by February. The costumed parades of Muggia, a tiny fishing village close to Triest, and of Sappada in the Dolomites are two of the finest and most-well-known, while Sauris’s ‘Night of the Lanterns’ sees locals tramp snow-filled woods and fields by lamplight.

By summer, hiking season is afoot. The snows typically thaw by late May, with routes remaining clear until September. Wildflower strolls in June through the high alpine meadows remain some of the simplest pleasures to be found here. Meanwhile, the Blue Flag beaches of Lignano Sabbiadoro makes for a great stop between walks.  Defined by Hemingway as the 'Florida of Italy', at this eight kilometre blue flag beach you can get active with watersports or simply relax on the soft sand and drink in the view. With a 130km stretch of varied coastline, Lignano Sabbiadoro isn't the only pit-stop worth visiting and Grado also known as sun island because of its entirely south-facing beach, gained its 33rd Blue Flag 33 in 2021 and is certainly worth exploring. This small fishing town sits on an island between Venice and Trieste and offers sea breezes, a well-preserved car-free centre and scores of restaurants where you can sample fish freshly hauled from the fishing boats that bob in the harbour.

Autumn is a fine time to visit, with the cities emptier than usual. The foliage turns a rich orange, making for fine forest walks in the riverlands, while September and October are also the harvest months, when the wine flows more freely than ever.

Winter sees Friuli get its second wind. Snowshoeing, cross-country skiing and even fat biking open up the frozen rocky expanses of the Dolomites and beyond. Winter Christmas markets and crib displays are also found across the region.

Start planning your dream visit to Friuli Venezia Giulia now by heading over to the official website.