Kakadu is the largest national park in Australia and has a human history dating back more than 40,000 years. But statistics alone don’t capture its magic. It covers almost 7,722 sq miles of land, within which you’ll find vast grass plains, dramatic waterfalls, seasonal wetlands and epic panoramic ridges. Join a river cruise to get up close to gargantuan saltwater crocodiles and magpie geese, visit Ubirr and Nourlangie for their ancient rock art galleries, and take a scenic flight over the 150m-high Jim Jim Falls.

There are ample places to stay inside the park, from campgrounds to lodges (special mention must go to the crocodile-shaped hotel in Jabiru). This is just as well – you’ll want a few days here. Experiences range from air-boating and hiking to sleeping under the stars, but it’s the scale and power of the place that linger longest. 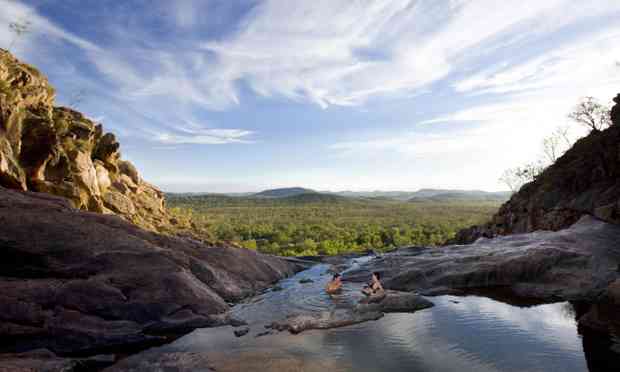 The same can be said of adjacent Arnhem Land, an Aboriginal area some five times as large as Kakadu. Independent travellers need permits (apply through the Northern Land Council), but it’s also possible to visit on small-group tours. The effort is well worthwhile: this is a magnificent area of sweeping landscapes, white beaches, stone escarpments and ancient sites rich in Aboriginal culture and stories.

South of Darwin, the small town of Katherine acts as the gateway to Nitmiluk National Park. Known chiefly for its 12km-long river gorge, it’s an unforgettable place to rent a canoe and paddle the waterways – unwinding afterwards at luxurious Cicada Lodge, owned by the area’s Jawoyn people.

If you’re continuing west, there’s a further treat along the Victoria Highway before the border with Western Australia: the picturesque sandstone expanse of Judbarra/ Gregory National Park.

Take in the Top End’s three best national parks on one road trip: the 284 mile Nature’s Way links World Heritage-listed Kakadu, the swimming holes of Litchfield and the gorges of Nitmiluk.