7 reasons why Taiwan is best explored by train

Taiwan is a sprawling but intriguing mass of temples and treasures. Hop on board its rail transport links that make it easier than ever to explore...

I’ve watched the Pacific Ocean flash-by at 300km/hour; jumped on a commuter train to Keelung night-market to feast on buttered crab; felt my ears pop in tunnels burrowing through marble mountainsides, and ridden a narrow-gauge railway through fragrant highlands of precious oolong tea. Taiwan may not have as many bullet-trains as Japan but for ease of use, comfort, affordability, and scenic journeys, its train network makes this small island ripe for exploring by rail.

With a rugged interior featuring 286 peaks topping 3,000 meters Taiwan’s railway system is shoehorned onto the coastal margins where most of Taiwan’s cultural life is concentrated. Whether you ride the high-speed service from Taipei City to the second city of Kaohsiung or spend a week slowly circumnavigating the island by local train, all journeys are within eyeshot of either the cobalt-blue Pacific Ocean, flatlands of verdant rice-paddies, or towering mountainsides

But why should you choose a rail holiday around Taiwan over other Asian countries who also possess great rail networks?

For battle-fatigued UK rail commuters accessing and using the Taiwanese network is child’s play. With English universally understood ticketing staff and onboard rail-guards will politely assist with any enquiry, particularly when first arriving at Taipei City’s cavernous main station where most journeys begin. The major city stations invariably have Visitor Information Centres within their concourses open from 9am–6pm and the train announcements are mostly complemented in English.

Likewise buying tickets is a synch. At stations they are purchased from staffed counters and ticket machines that display in English and accept overseas bankcards. Tickets can also be bought at convenience stores (at 7-Elevens) or online. The two major rail companies both have easy to follow online booking systems: the Taiwan Railway Administration (TRA) runs the express and local train network while Taiwan High Speed Rail (THSR) operates the rapid intercity Taipei to Kaohsiung service.

Tickets can be bought up to 28 days in advance, which makes planning easy, not least for weekends and holidays when trains can be heavily booked. 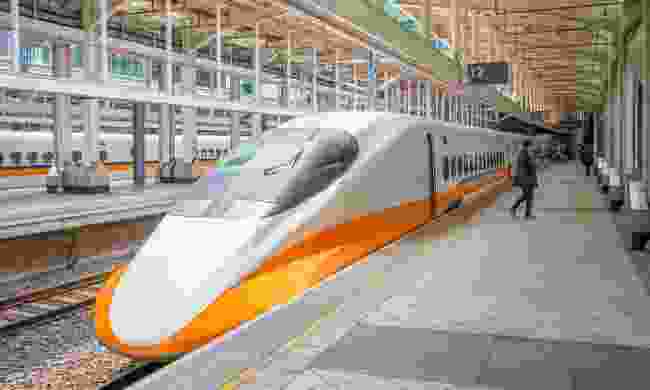 “For those in a hurry the THSR bullet-train covers Taipei City to Kaohsiung at staggering speeds over 300km/hour...”

2: You can get to just about everywhere

The TRA network enables travellers to circumnavigate Taiwan with numerous stations accessing the mountains, beaches, and all major cities. On the heavily populated flatter western seaboard trains of varying speeds, both express and local ordinary services, ply the entire coast from north-to-south and vice-versa. The fastest regular train is the air-conditioned Tze Chiang Express, which takes around four hours between Taipei and Kaohsiung. Slightly cheaper and slower are the Chukuang and Fuxing services while ordinary local trains are typically used for shorter commutes. For those in a hurry the THSR bullet-train covers Taipei City to Kaohsiung at staggering speeds over 300km/hour, a journey of around 90 minutes.

The most scenic railroad however, plies the eastern coastline where at times the train hugs vertiginous sea-cliffs and disappears through tunnels several kilometres long. A while back I put my bicycle on a slow local train from Yilan to Taroko Gorge after my cycling holiday was interrupted by a landslide closing the main road. The train’s sedate progress allowed time to soak in the far-reaching Pacific Ocean views and pine forested mountain scenery.

3: It's great value (particularly with a rail-pass)

Compared to UK prices rail travel in Taiwan is great value. Even those on a stricter budget will find the faster trains like the Tze Chiang Express affordable at roughly £14 one-way. By contrast the super-fast THSR are pricier at around £31 between Taipei and Kaohsiung but cheaper if booked up to 28 days in advance. If you are going to make multiple journeys then a THSR Pass represents excellent value. They must be purchased and reserved online at thsrc.com.tw before you arrive in Taiwan. Different types of passes are available depending on your needs. For flying visits the unlimited Three-Day Pass includes express trains for 2800NTD (£55) while ideal for slow travel on local trains is the Five-Day Standard Joint Pass costing 3600NTD (£90). 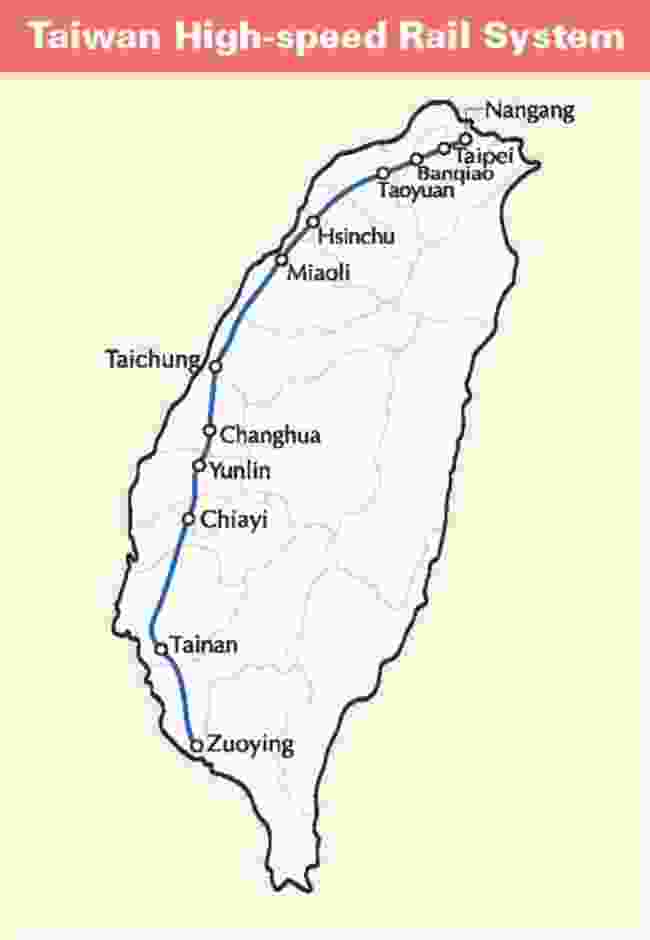 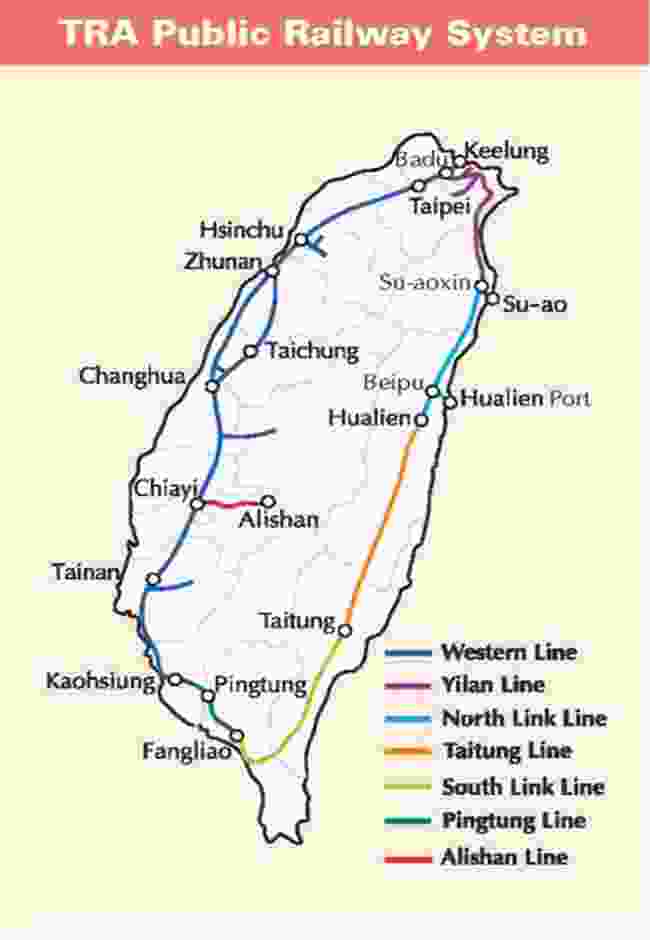 4: Enjoy lunch on the run

Taiwan is famous across Asia for its unique cuisine and for those on the move railway stations have a delightful lunchbox system much like Japanese bento boxes known as biandang. These disposable lunch boxes can be bought on the train itself or from station concourses and typically feature rice, meat, several vegetables, boiled egg, and pickles. Staple favourites like pork chop rice are very inexpensive – sometimes less than NT100 (£2.50) – and vegetarians should be able to find tofu based boxes.

Among a cluster of privately run historic branch-lines veering off the mainline is the remarkable Alishan Forest Railway. This historic track ends its way into the mountain forests from near Chiayi and the little tourist trains call by Taiwan’s highest station at Chushan (2,451m). It was constructed during Japanese colonial rule around 1912 to facilitate logging and crosses numerous old wooden bridges. Other branch-lines include the Jiji Line: a scenic 30-kilometre route in central Taiwan built in the 1920s to service the hydropower industry while the Pingxi Line, another 1920s creation, was constructed for the coal industry but now takes visitors on a pretty ride via several waterfalls. 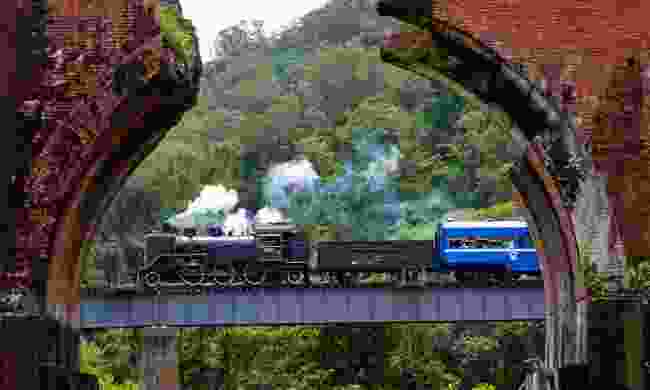 “… another 1920s creation, was constructed for the coal industry but now takes visitors on a pretty ride via several waterfalls.”

With Taiwan’s major settlements linked by rail and integrated into urban networks of metro systems, buses, and cycle-hire, exploring Taiwan’s cities is seamlessly easy. The biggest headache is probably deciding how to fit everything in. Although Taipei isn't officially classed as one of the cities of the west coast, its labyrinth of department malls, food courts, and night markets make it well worth visiting whilst in the region. Indulge with a generous serving of classic street food dishes such as stinky tofu. The red Tamsui-Xinyi metro line that runs to the main station stops at Taipei 101 – the world’s 10th largest skyscraper.

The west coast rail route has three must-see city stopovers at Taichung, Tainan, and Kaohsiung. Taichung has a youthful feel with a natural science museum featuring animated dinosaurs, and it is a stepping-off point for Gaomei's bird-rich wetlands and Taiwan’s ethereally beautiful Sun Moon Lake. Historic temples loom large upon arrival by rail into Tainan and those honouring the sea deity, Matsu, and Confucius shouldn’t be missed. Meanwhile Kaohsiung has a buzzing restaurant and bar vibe along its Love River, as well as popular food night-markets like Liuhe, aromatic with delicacies like fish rice noodle soup.

Outside of the cities, visitors to the region also have the opportunity to explore quaint townships for a more authentic encounter with locals. Red-bricks pave the way to craft stalls of bustling Lukang Old Street, located in Changhua County. Further inland the remote township of Wufeng is hidden among the indigenous mountainside of Hsinchu County, offering travellers the chance to kick back, relax and soak in its hot spring, with one of the most majestic viewpoints in the country. 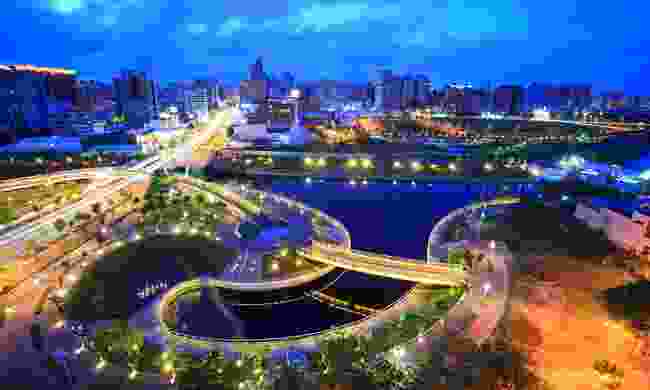 7: … then the east coast's natural wonders

Simply building a railroad down the eastern coast was something of an engineering miracle. The gateway to breathtaking Taroko Gorge and its precipitous marble chasms is Hualien City, easily accessed via a two-hour rail journey from Taipei City. Hiking is popular and two of the best known trails around Taroko include the hairily-steep Zhuilu Old trail and the shorter Lushui-Holiu trail. As the mountains diminish heading south down TRA’s eastern line rail travellers will encounter hot-springs, original austronesian aboriginal inhabitants, and finally wild beaches around Kenting in the far deep south. 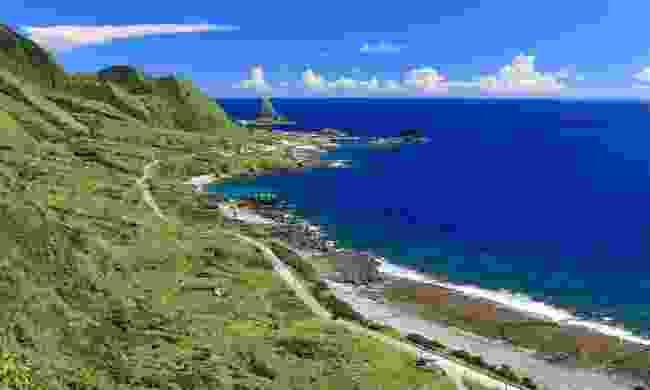