Hit the trails in Slovenia: 5 incredible long-distance hikes we can’t wait to try

From Slovenia’s newest long-distance hiking route through the Julian Alps to the longest trail dating back to the 1950s and everything in between, here are five walks in Slovenia well worth trying... 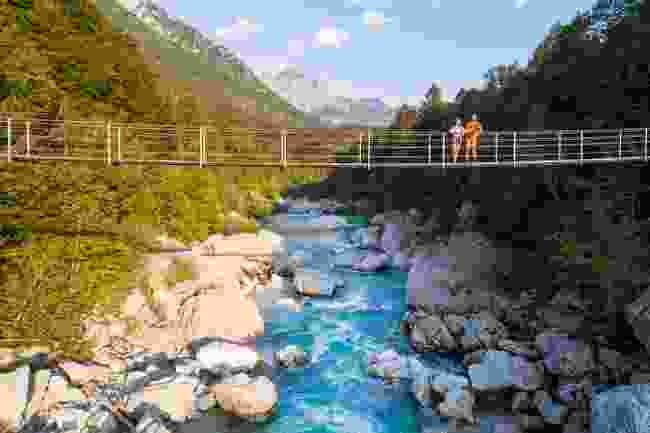 Slovenia’s newest long-distance hiking route, the Juliana Trail is an easily accessible and hugely rewarding romp through the rugged scenery of the Julian Alps. It can be walked in 16 stages, or expanded to 330km (20 stages) with an optional loop through the Goriška Brda wine region.

Hike alongside the rushing turquoise waters of the River Soča, stroll through the less-visited Koritnica Valley with 2,679m Mt Mangart towering ahead of you and cross the rugged Pokljuka plateau. Hop over the border into Italy for a stage, and stop to soak up views of Slovenia’s highest mountain, Triglav, at several points along the way. In between the panoramic scenery, you’ll have oodles of opportunities to experience some of Slovenia’s wonderfully rich culture and heritage – from the beautifully preserved old town centre of Radovljica, to the much photographed island church on Lake Bled – not to mention plenty of scope to enjoy some of its delicious cuisine. Be sure to sample the štruklji, rolled dumplings filled with anything from cottage cheese, salami and beans to sweet versions stuffed with apple and nuts. 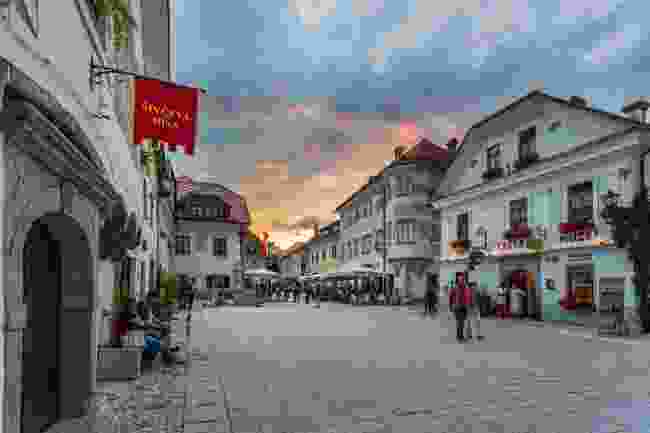 The Juliana is a relatively easy walk – there are no really hard climbs, no exposed sections, and overnight stops are in towns or villages – making it a great route for families or those with less experience of challenging mountain walking. Most stages are accessible by public transport – and more hikers using public transport helps preserve these services for locals to use. 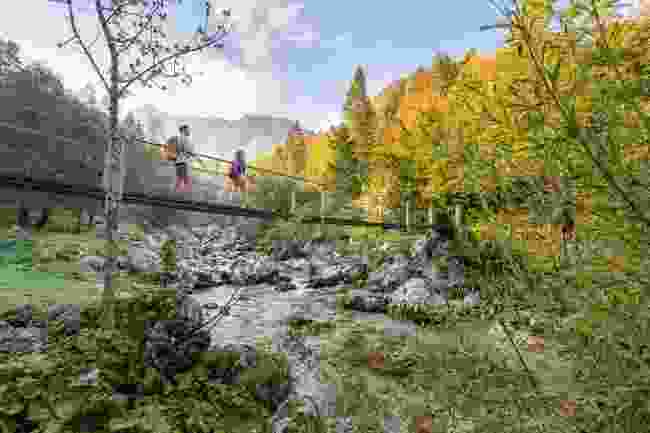 The Alpe Adria Trail is an unforgettable hiking route through Austria, Slovenia and Italy, stretching from the foot of the Grossglockner, to the shore of the Adriatic near Trieste. A little over a fifth of the trail passes through Slovenia, taking in parts of the Julian Alps and Triglav National Park, along with other, less immediately obvious walking areas. 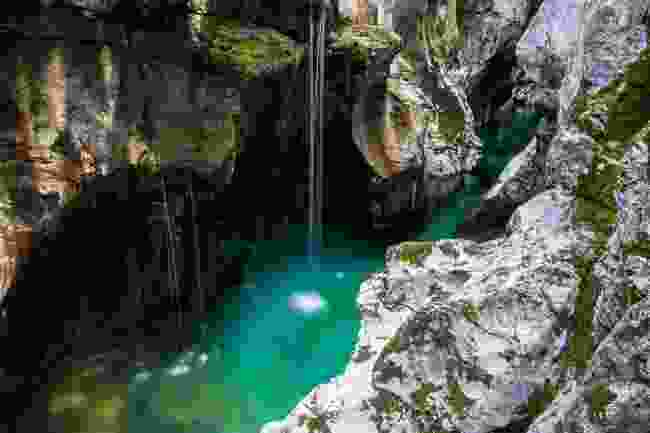 After crossing the Karavanke from Austria by way of a thrilling ridge walk, the Alpe Adria Trail takes you to Kranjska Gora, then over the 1,611m Vršič Pass, with views over the verdant, undulating landscape on either side. Beyond this it follows the Soča Valley, including the narrow, twisting chasm of the Soča Gorge – one of the absolute highlights of the whole trail. After crossing the border into Italy near Tolmin, the trail returns to Slovenia to meander through the vineyards of Goriška Brda (one of the country’s top wine regions) and across the edge of the Karst region, returning again later to visit the historic stud farm at Lipica with its Lipizzaner horses.

The Alpe Adria Trail can be enjoyed by families just as much as seasoned trekkers, though care will be needed on the swing bridges over the Soča with younger children. 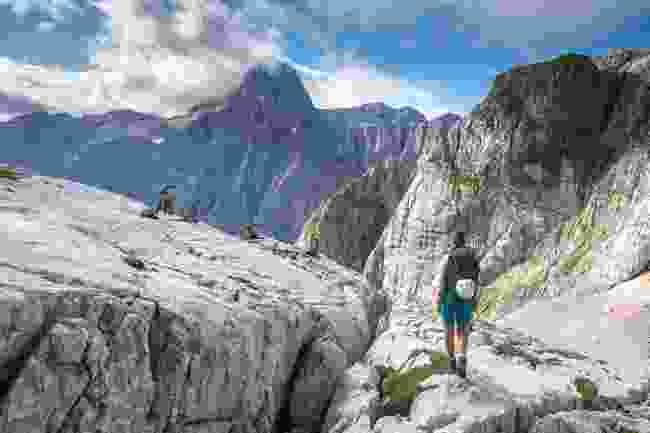 Slovenia’s longest mountain trail opened all the way back in 1953, and forms a complete traverse of all the country’s main mountain ranges. Starting in Maribor, it leads west across the easy, hilly landscape of Pohorje, then takes a dramatically higher route through the heart of the Kamnik-Savinja Alps, bagging 2,558m Grintovec and other challenging peaks over 2,500m on the way. After crossing the Karavanke it takes in a great swath of the Julian Alps, following a meandering route which includes a climb on Slovenia’s highest mountain, 2,864m Triglav, along with Razor, Jalovec and other iconic summits. South of the Julian Alps it crosses the Karst region and skirts the Vipava Valley, to finish at Ankaran on the Adriatic coast. It takes between 28 days and 37 days to walk the whole route (not to mention around 37,000m of ascent), though you can easily break it down into shorter sections. 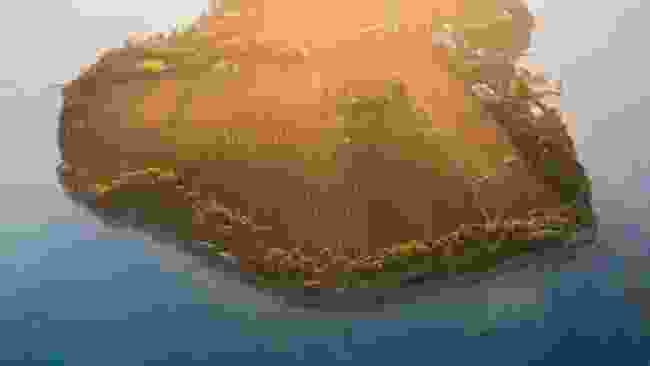 Ankaran from above (Jaka Ivančič)

While there are several easy sections and stages suitable for families, the Slovenian Mountain Trail is, as its name might suggest, one which includes plenty of stages which are significantly more difficult, including exposed sections secured with steel cables, where a helmet and via ferrata kit should be considered mandatory. 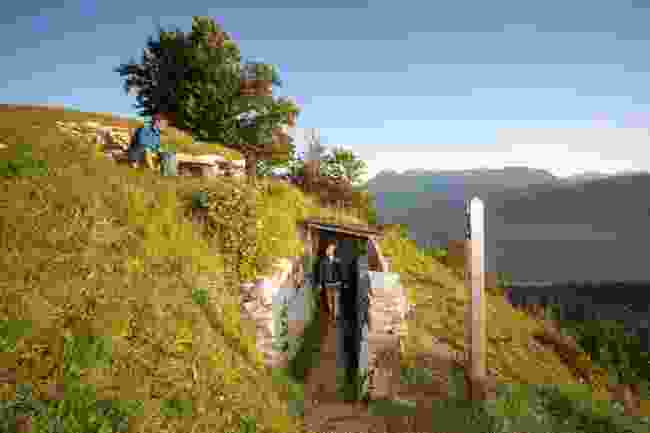 The Pot Miru or Walk of Peace is a cultural trail linking several sites associated with the Isonzo Front. During World War 1, the River Soča (called the River Isonzo in Italy) formed the front line between Italy and the Austro-Hungarian Empire, of which Slovenia was then part. Despite this being an area of little tactical importance, the series of 12 battles fought along this front between 1915 and 1917 resulted in an appalling loss of life on both sides – some half a million deaths, including around half the entire Italian casualties of the First World War. 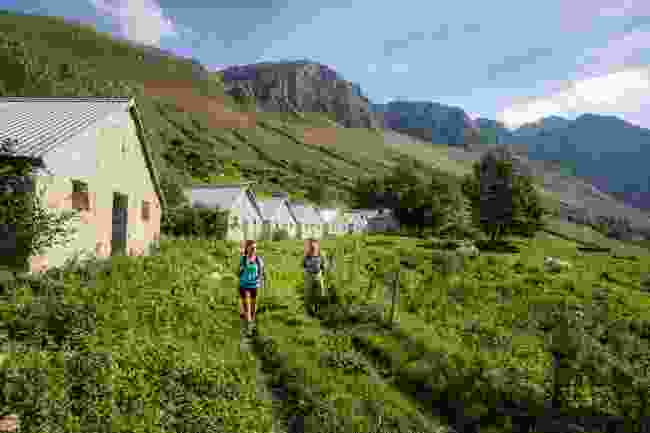 The trail stretches between Log pod Mangartom and the Adriatic coast, and along its way visits several outdoor museums – Ravelnik, Kolovrat, Čelo, Zaprikraj, Mrzli Vrh and Mengore, consisting of restored bunkers, trenches, charnel houses, forts and memorial churches. There are two possible variants to the trail in the Soča Valley – one keeping west and running through Kobarid, the other climbing east over 2,244m Mt Krn – and again further south, where one branch of the trail runs on the Slovenian side of the border, the other through Italy. Poignant, beautiful and deeply moving, it’s an area which still resonates with a profound sense memory, and of loss. 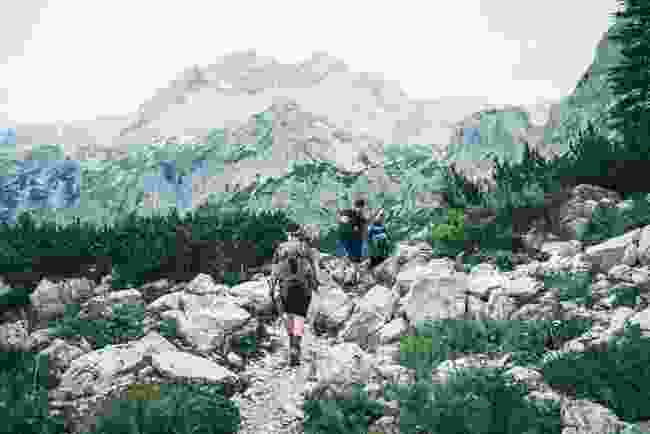 The Via Alpina is a series of five long-distance trails traversing the Alps, with a combined total distance of over 5,000km. Two of these trails include a section in Slovenia, which together add up to a more modest 340km.

The main Via Alpina route, the so-called ‘Red Trail’, heads north across the Karst and the highest part of the Julian Alps before turning west along the borderline of Austria and Italy, while the ‘Purple Trail’ branches off below Triglav and follows the Vrata Valley, before turning east through the Kamnik-Savinja Alps and into Austria. Along the way you can watch the first rays of the early morning sun flicker across the summits of the Julian Alps from a mountain hut below Triglav, follow the lush Vrata Valley surrounded by 2,000m peaks, and hike to the point where the borders between Slovenia, Italy and Austria meet. 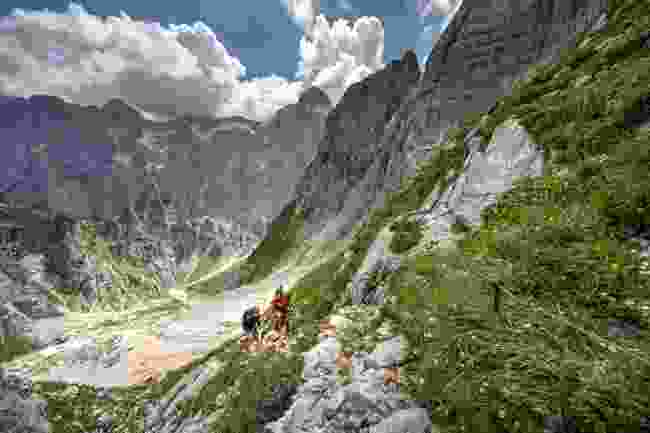 The various strands of the Via Alpina are a tougher proposition than the Juliana or the Alpe Adria trails, taking in high mountain paths, with some exposed sections, less prominent trail markings, and overnight stops in mountain huts. On the other hand they include some of Slovenia’s finest mountain scenery and most rewarding mountain trails, packed with enough horizon-breaking views and excitement to last half a lifetime, and forming part of a complete traverse of the continent’s greatest mountain range.

Not just for summer 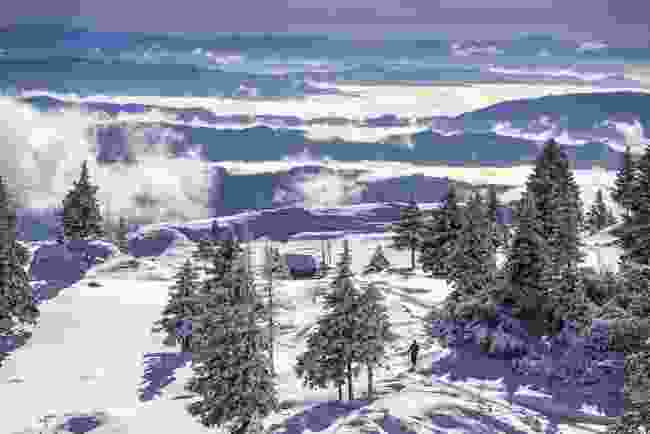 Going wild in Slovenia’s mountains isn’t just limited to the summer months. During the winter, much of the country is transformed into a winter sports playground, with seemingly endless possibilities for skiing, snowboarding, cross-country skiing, snowshoeing, sledging, skating, ice climbing and winter walking. Slovenia’s ski resorts offer a good mixture of terrain, suitable for families and beginners as well as experienced skiers. Some of the best places to take to the slopes are Velika planina near Ljubljana, Vogel, Kranjska Gora, Cerkno, Pohorje, and Kanin near Bovec which links up with the Sella Nevea ski area in Italy.

For more inspiration and information on Slovenia, head over to the official Slovenia website.