9 experiences you can only have in Kotor, Montenegro

Steeped in history, with a full and vibrant events calendar, you’re never short of authentic experiences in this spectacular medieval town. Eat, drink and be merry – the Montenegrin way. 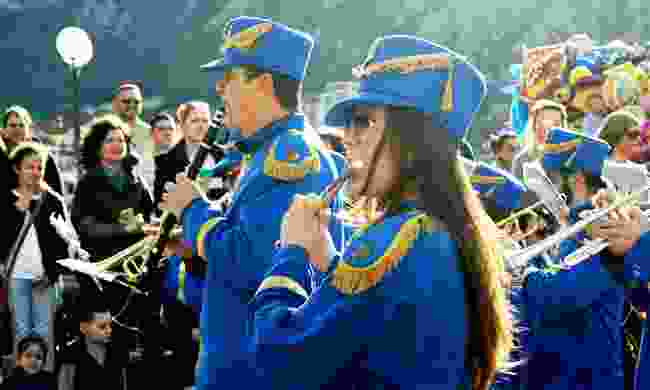 Kotor’s winter carnival, held every February, has been going since the beginning of the 16th century. For over 500 years carnival groups have been dressing up, creating colourful floats and carousing through the streets of Kotor, enjoying a jam-packed calendar of events including costume balls, music concerts and theatric performances. The highlight of carnival is a masked parade from one part of the city to the other, with revellers dropping in on bars, cafes and clubs along the way, serenaded by various blues, jazz and rock bands.

Nearly 20 years ago, a summer edition was started – basically the same idea, but with the added benefit of warmer weather and a feel-good holiday vibe. It’s more international too, with carnival groups from all over the world flocking to Kotor to take part. The four day festival starts with a decadent Fisherman’s Feast in the Square of Arms, where visitors can tuck into all kinds of fish, local dishes and Montenegro’s famous wines. Summer Carnival culminates with a kaleidoscopic parade that somehow manages to be more colourful, chaotic and festive than the winter one.

2. Eat seafood as the sun sets 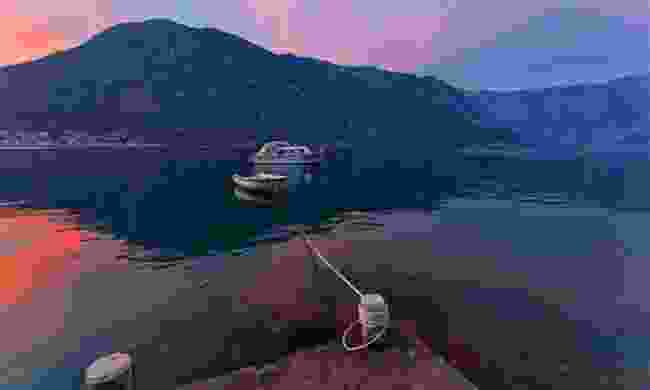 Watch the sun set over the harobour (Shutterstock)

Eating your meal as the sun sets over the mountains that plunge into the sea is one of Kotor’s simplest and most memorable experiences. Down at the harbour, fishermen sell the bounty of the bay, with local chefs and restauranteurs their biggest customers. The incredible swordfish, tuna, dog-fish and squid will become the culinary stars of local soups and broths or simply grilled and served as a seafood platter.

Restaurant Galion, set in an old stone building, right on the harbour, is the most elegant option, offering fine dining with equally fine views across the harbour. Konoba Galerija, also on the harbour near the old city, is famous for mixed seafood in buzara sauce, a sublime blend of olive oil, wine, garlic and mild spices.

For cheaper but equally delightful options, head along the path following bay towards Dobrota where you’ll find a clutch of restaurants offering outdoor dining, right beside the water. The views are spectacular – and you may end up being serenaded by a guitar playing fisherman as well.

3. Light a candle in the iconic St Luke’s chapel 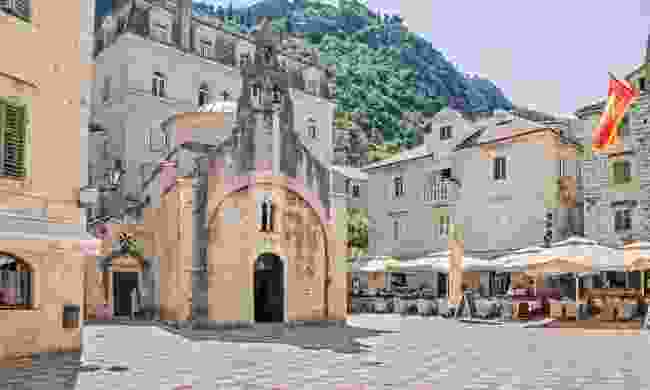 During its turbulent history, Kotor has been both Catholic and Orthodox, and the great number of churches with the walls of the old city test to that. St Tryphon, on Square of Arms, is home to the relics of the saint it is named after, is currently the the seat of the Croatian Bishopric of Kotor and the entire peninsula.  St Nicholas, a relative youngster built in 1909, is the most important Orthodox Church on the city. On most days you’ll spot the local priest, looking resplendent in his black robes, emerge from the high doors swinging an incense burner, cleansing the entrance and sending a glorious scent drifting across the square.

There is one church that serves them both - the tiny chapel of St Luke’s, also in Piazza Greca. It was constructed in 1195 as a Catholic church, but today Catholic and Orthodox altars stand side by side, a testament to the history of Croat-Serb relation in Kotor. It is a wonderfully atmospheric chapel, full of icons and lit by the flickering light of beeswax candles. Look for the icons of St Spiridon, a saint venerated by both faiths. 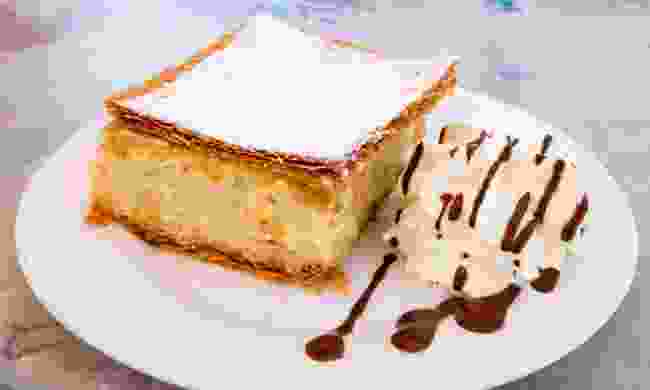 The cream-filled pastry is a favourite in Kotor (Shutterstock)

Krempita, a local custard-filled puff pastry is a popular desert throughout the Balkans, but in Kotor is part of the city’s identity. Here, krempita is created following a recipe that has been passed down from generation to generation. The basic ingredients are the same – puff pastry, custard, chattily cream – but the krempita of Kotor come with a secret ingredient that according to locals, make them so much better.

There are worse ways of spending you time in Kotor that tasting a sample of them and trying to figure out what it is. Available as a restaurant desert or to go, this indulgent treat is the taste of Kotor.

5. Visit a church on the Adriatic’s only man-made island 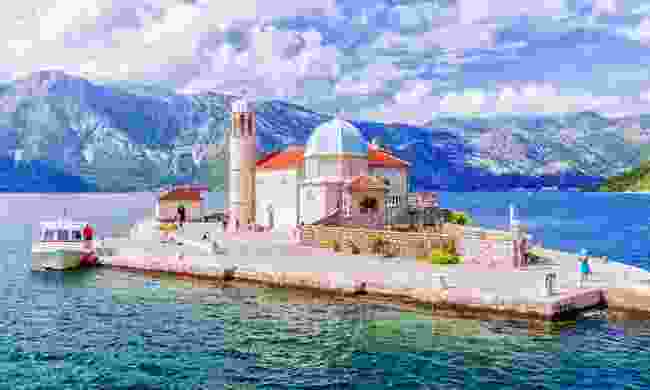 Church of our Lady on the manmade island (Shutterstock)

Set in the glittering waters of the Bay of Kotor, just off the picture-postcard town of Perast, Our Lady of the Rocks is a gorgeous Instagram star and the only man-made island in the Adriatic. You’ll see it in every article about the bay and on every postcard, and a boat trip out to the island – either from Kotor or Perast – is a highlight of any trip to the region.

According to local legend, ‘construction’ began in 1452, when two fishermen found a picture of the Virgin Mary on small spit here. It became traditional amongst local fishermen to place a rock on the spit after every successful fishing trip. These stones were supplemented by more substantial blocks and scuttled ships. By 1722 it was big enough to support a church, still standing today, that houses 68 paintings by the Baroque artist Tripo Kokolja. 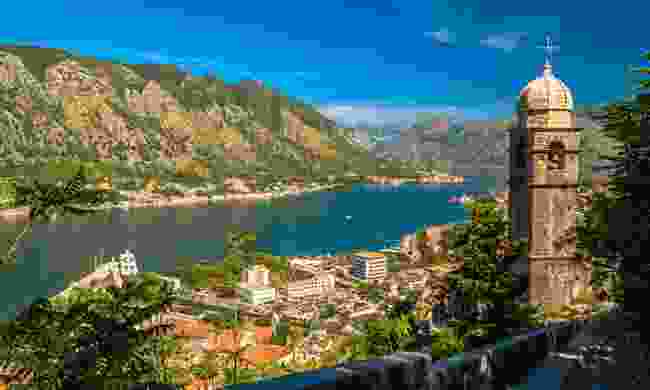 The view from the Castle of San Giovanni (Shutterstock)

Sitting at the base of Mt Lovćen, Kotor is the perfect base to explore this part of the Dinaric Alps. It is easy and convenient too, with one of the most iconic trails starting just behind the the Old Town. It’s called the ‘Laddsr of Kotor’ and you’ll spot it zig-zagging up the mountain from most parts of the town.

The ‘Ladder of Kotor’ was once the only route connecting the town with Njegusi village and the old royal capital of Cetinje. From the 1200m-high Castle of San Giovanni, perched en route near the top of the range, views sweep across the bay, taking in the historic orange-roofed towns, the glassy ocean and the rolling mountains beyond. 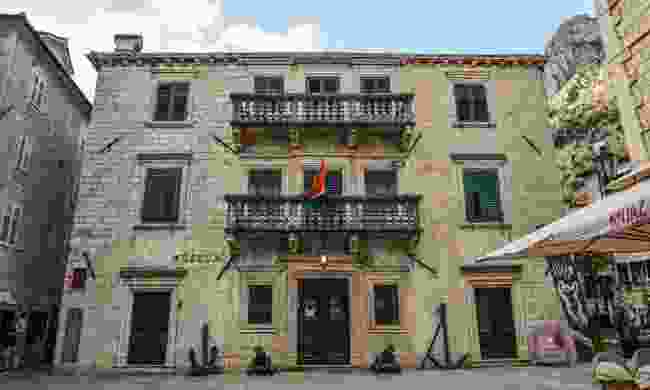 Celebrate Kotor's maritime traditions at the maritime museum, housed in a palace (Dreamstime)

Kotor has a long and proud Maritime tradition. It has one of the oldest navys in the world - created initially as a trade guild but acting as a bulwark against pirates in the 19th century. And the local Maritime Museum is one of the best in the region, celebrating the city’s nautical history with exhibits of model ships, paintings and furniture from as far back as the 16th century, all set in a Baroque palace that once belonged to a local noble family.

The city’s maritime heritage is celebrated most enthusiastically on Boka Night, an ancient tradition that sees boat owners decorating their vessels for a naval parade and fireworks filling the skies. Held towards the end of August every year, the harbour comes alive with illuminated boats, each vying for your attention, and the streets ring with music and laughter. It’s a chance for locals to let their hair down and show pride in their city’s maritime past and present – and the one they look forward to the most.

8. Dress up as a medieval knight 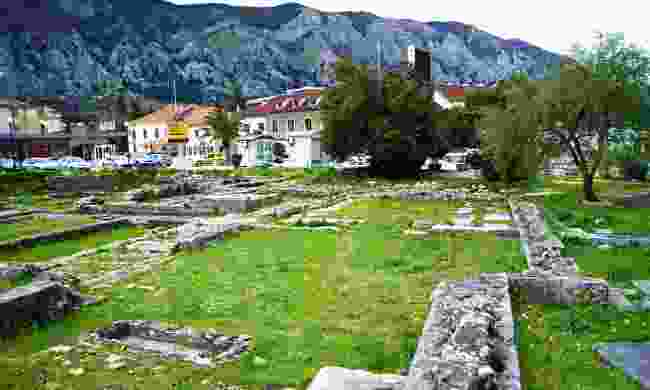 Roam monastery remains in the old town, where you can dress up as a knight (Dreamstime)

Forget stuffy old museums, full of priceless exhibits, kept in glass cases. The Palace of Living History in Kotor believe history is a living, breathing thing and encourages visit get hands-on with the relics of the city’s medieval past that they have on display.

Located in Kotor old town, within beautiful remains of the old Dominican Monastery, a visit to the museum includes a 35 minute tour where an enthusiastic guide introduces you to the fascinating medieval history of Kotor and its bay, regaling you with some of the most dramatic moments in Kotor’s military.

Then the fun bit comes, when you get the chance to touch and interact with exhibits, grinding flour (medieval style), operating an ancient printing press, mint some coins, and most humorously, dress up in an authentic suit of medieval armour. 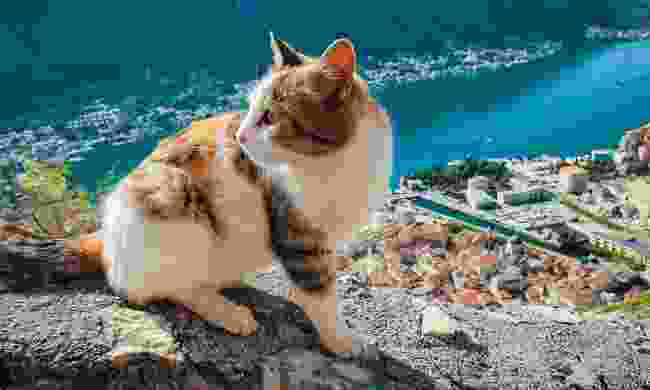 Stray cats are often the scourge of harbourside cities, but in Kotor they are loved. Indeed, they have become the unofficial symbol of the city, with cat-themed souvenirs and knick-knacks for sale throughout the old town. They wander through Stari Grad like they own the place, finding the sunniest corners to groom themselves and feasting on the scraps from the city’s finest restaurants.

There’s even a Cat Museum, tucked away on a tiny square near St Michael’s. It houses a collection of cat memorabilia, including paintings, posters and postcards, as well as a family of cats lounging wherever there is sun. The museum is small, but your entrance fee goes towards feeding and caring for the city’s strays.