The history and culture of Macao’s old neighbourhoods reveal a whole other side to the region, letting visitors glimpse local life through the buildings and markets that have barely changed in generations… 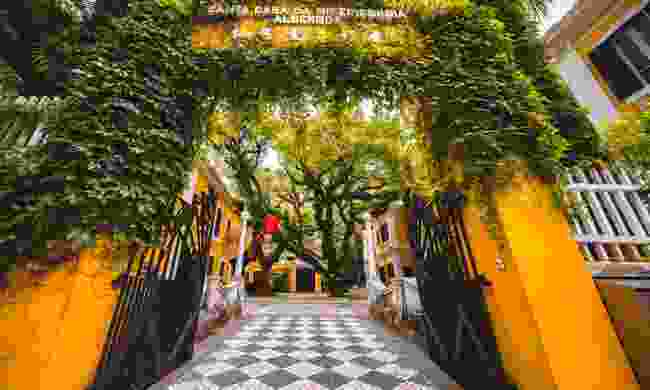 St Lazarus is easily explored on foot, beginning at the Portuguese-style church that lent the parish its name. On the original site was a hermitage, built in the 16th century to give shelter to lepers. But today, only the old chapel cross (in the forecourt) remains; the church itself was rebuilt in 1885, and now the area’s cobbles and surrounding artisan boutiques are a world away from when this was better known as the ‘leprosy quarter’.

Plague swept the district in the late 19thcentury, when all of its old wooden houses were razed. The area retained its reputation as a refuge for the needy, though, with the Albergue SCM that once served as a shelter for elderly women, and then latterly the poor. Today, its pretty lemon-coloured walls house galleries and local art, while a short wander to the grand Tap Seac square, lined with neoclassical buildings etched in a dark red, reveals a wealth of boutiques, from workshops where you can make your own candles to artisan leatherworkers.

End your visit atop Guia Hill, home to a fortress and a network of tunnels that doubled as air raid shelters during the Second World War. Sweat it up the hill (or take the cable car) to the 17th-century battlements, built following a failed invasion by the Dutch and overlooked by a European-style lighthouse that remains the oldest still standing in Asia. Don’t miss the fort’s pretty chapel, added later by Clarist nuns, which has some glorious European-meets-Chinese frescoes.

Named after the wrought-iron, European-style lamp post that stands in the Rotunda de Carlos de Maia (it actually has four bulbs, but who’s counting?), the lure of the bustling, multicultural Three Lamps District is the prospect of diving into local life.

“The old slaughterhouse has been turned into an eclectic gallery, but it’s one of few nods to gentrification”

The area is particularly known for its South-East Asian food, with thousands of Burmese Chinese having relocated here in the 1960s to escape persecution, later joined by Indonesian and Cambodian refugees. Consequently, countless food stalls and little eateries like Nga Heong, on Rua de Fernao Mendes Pinto, dish up delicious Burmese-style cold noodles and thick oily curries that conjure images of the motherland. 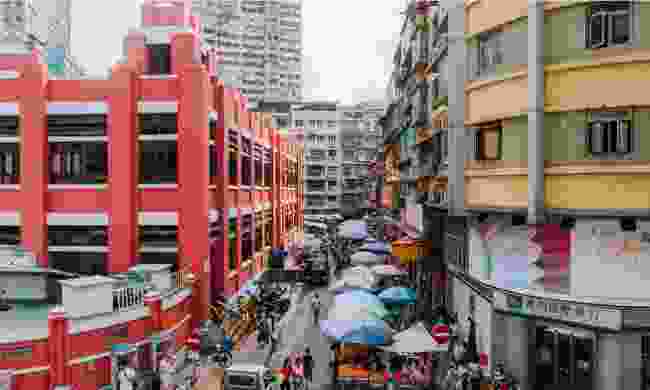 Away from the dinner table, the surrounding streets are packed with stalls, tea shops (great for people watching) and vendors hawking everything from clothes to consumables. The old slaughterhouse has been turned into an eclectic gallery, but it’s one of few nods to gentrification. A key stop is Red Market, a 1930s Art Deco-style building that boasts a powerful coat of scarlet paint that makes it hard to miss. Inside, spread over three storeys, is a wet market very much off the tourist path, offering a noisy, thrilling glimpse of daily life. 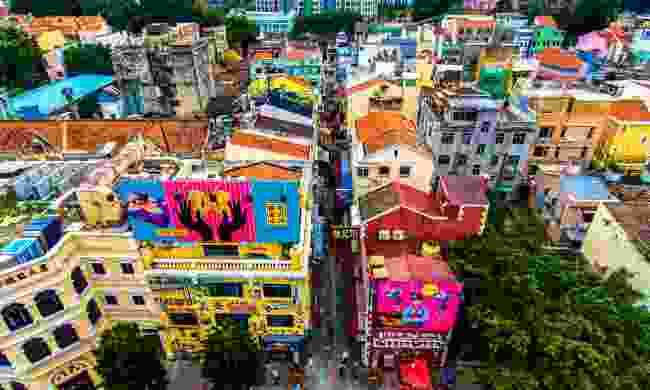 The colourful alleys of Taipa are great fun to wander (MGTO)

The old fishing village of Taipa has resisted much of the modernisation that now surrounds it. Today, labyrinthine streets wrap around old European-style mansions, temples and generations-old restaurants, drawing you deeper into a neighbourhood that is the main settlement on what was once an island before causeways and reclaimed land linked it to Coloane.

Wander down to the sumptuous food street of Rua do Cunha, where you can cool down with some durian ice cream, then drop by the mint-green Taipa Houses and Museum of Taipa and Coloane for a bit of background on the area, and to admire their photogenic Portuguese architecture.

The 19th-century Tin Hau temple, named after the Taoist goddess of the seafarers, speaks to the village’s other heritage. Its lavish altar was once a key stop for departing sailors to pray for a safe voyage, but thanks to land reclamation it’s now far removed from the water, though no less busy, especially during the goddess’s birthday festival (on the 23rd day of the third moon in the lunar calendar). Finish in one of the many Macanese and Portuguese restaurants that line the Feira do Carmo square, celebrating the culinary heritage that has sprung up naturally over the years.