Plunge into the deep end with a snorkel, swim, or scuba dive in and amongst Fiji's fascinating underwater worlds...

Fiji is surround by the rich waters of the Pacific Ocean and claims its place as a premier diving destination with ease. It is home to two of the longest reefs on the planet – the Great Sea Reef and the Astrolabe Reef – which stretch for hundreds of kilometres, and are one reason why divers often refer to Fiji as the soft coral capital of the world.

Whether you want to learn to dive or have dozens of hours in your logbook, Fiji has plenty to offer. The pristine waters offer their clearest visibility between July and December, but diving is a year-round proposition here, with water temperatures rarely dipping below 23°C.

Even if you don't want to strap on a tank, many locations offer brilliant snorkelling. This is also the perfect way to try one of Fiji's most fabulous underwater experiences — swimming with manta rays. 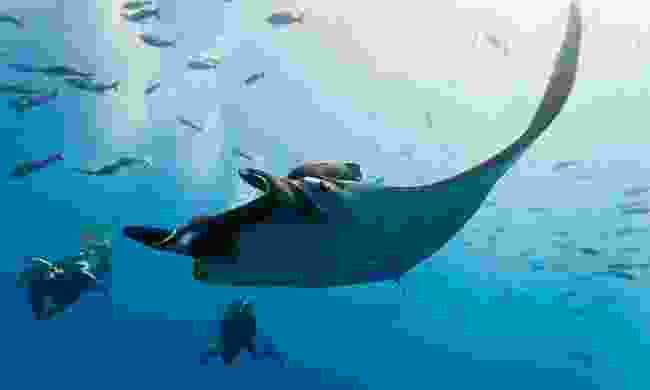 Manta rays, with their wingspan of up to 5m, are one of the most otherworldly fish in the ocean, and getting to snorkel with them might be the closest you'll ever get to an alien encounter. Fiji offers a couple of locations to do just that.

In the Yasawas island group, the channel of sea between Nanuya Balavu and Drawaqa is a perfect place to swim with mantas between May and October. During this period, spotter boats find the fish while you slide into the water – snorkelling is key here, as mantas can be nervous creatures and will swim away as soon as they hear the bubbles of a scuba diver.

Just off Kadavu, you can see mantas throughout the year at the manta reef. The fish come here from the deep waters to be attended to by cleaner wrasse, who keep them looking in top condition by nibbling on the parasites and dead scales that the mantas collect.

2: Have a shark encounter at Beqa 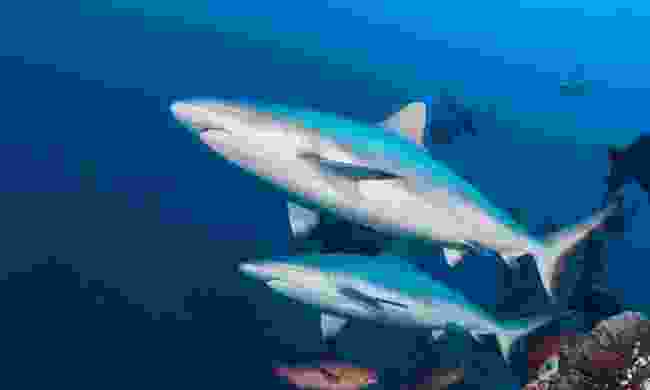 Much as going on a safari offers the thrill of spotting a lion or leopard, so it is with divers and sharks. Beqa, on the southern coast of Viti Levu, is just the place for experienced divers to scratch this particular underwater itch.

The Shark Reef Marine Reserve at Beqa was the first marine sanctuary in Fiji, set up with the help of local dive operators and the scientists who study the shark population here. There are eight resident species of shark here. The largest numbers are of the smaller species like blacktip and whitetip reef sharks, which swirl around in divers in large numbers. If that wasn't enough, larger species like bull sharks and tiger sharks are also common, and many of the residents (who can reach 4m in length) are well known enough to be recognised and named by the experience dive guides who accompany you on this thrilling dive.

3: Explore the island of Vanua Levu 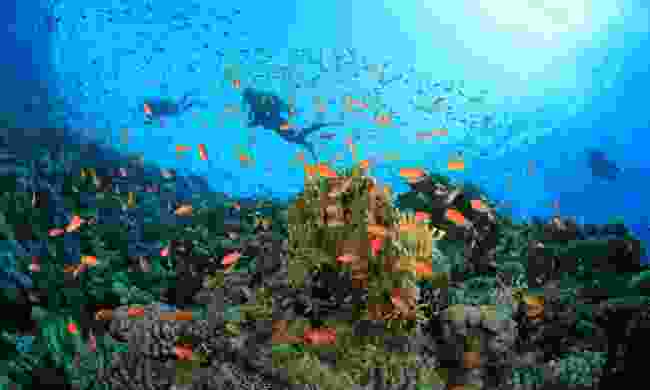 Fiji's second largest island, Vanua Levu, is fringed by the Great Sea Reef, which arcs a mind-boggling 300km from the top of the island all the way southwest to the Yasawa island group. It is the second longest reef on the planet and home to 80% of all Fiji's coral fish species. Due to its enormous size, great swathes of it remain unexplored to this day. Diving here is to enter a world rich in hard and soft corals, large pelagic fish, turtles and even resident dolphins.

Vanua Levu is also home to the Namena Marine Park. One of the highlights for divers here is the Nasonisoni Passage. If drift diving is your thing, come here during the tidal exchange and find yourself pulled into the passage and forced through the channel by the current, spotting groupers, barracudas and reef sharks, as well as an ever-moving rainbow of coral. For a more sedate dive, try the park's dreamhouse dive – a seamount that attracts large pelagics like groupers and tuna. 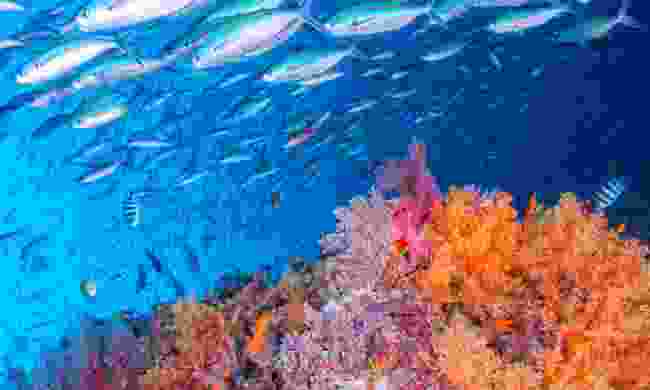 The best soft coral in Fiji may well be found in the Bligh Passage, the long stretch of sea running between Viti Levu and Vanua Levu. Named for Captain Bligh (of 'Mutiny on the Bounty' fame) who sailed through here in 1789, its rich currents support a wealth of sea life – more than 300 coral species and over a thousand different fish.

While much of the best diving in Fiji takes place from shore-based dive centres, the Bligh Passage is all about liveaboards. Its highlight is the Vatu-i-Ra passage, with its bright fields of softly waving soft corals. Go for the gentle drift dive of the Vatu Express, where current lightly takes you past the reefs, or the wall dive of Purple Haze – so named for its extravagantly coloured coral.

Divers able to visit between July and August also stand a good chance of seeing much larger sea life, as dozens of humpback whales migrate through the channel every year. Even outside this time, there are several places in the channel with resident dolphin and pilot whale populations. 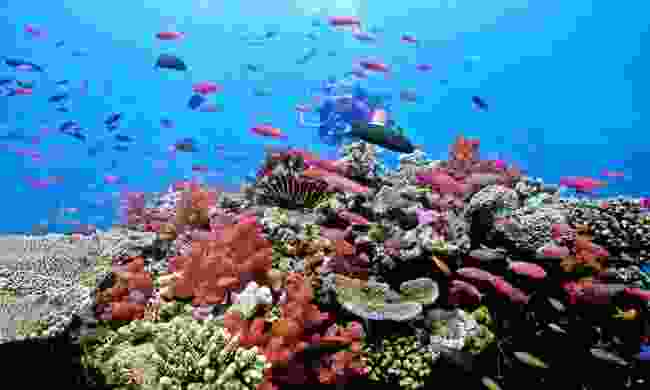 Kadavu is home to another one of Fiji's stellar dive attractions – the Great Astrolabe Reef, the fourth largest barrier reef in the world. This runs for 100km past the south of the island. May to October are the best months to dive here, as high winds in other months can mean choppy waters and reduced visibility.

Kadavu is only lightly populated but specialised in small and largely self-sufficient dive resorts to take divers of all classes out to the reef. The Yellow Wall dive is a good dive site for beginners. It has a dramatic seascape of pinnacles, canyons and coral-draped walls.

The Naiqoro Passageway is the Astrolabe's main marine reserve and has some of the most varied diving in the country, from tranquil coral beds to speedy drift dives for the more experienced. If you range far into the reef you can reach the Belfry, a sea pinnacle that attracts large numbers of batfish, as well as reef sharks and tuna.