Paddle the lakes in summer, marvel at amber trees in autumn and skate your way through winter – adventure is guaranteed in the Great White North no matter which day, month or season you choose to visit

Mountains, Mounties, moose, maple syrup. Powder snow, grizzly bears, Anne of Green Gables. Yes, these things are all there. But you can’t reduce the world’s second-largest country – 10 million sq km, spread across six time zones – to a handful of cliches. Just as you can’t say there is one best time to visit. Canada comes up trumps in every season. 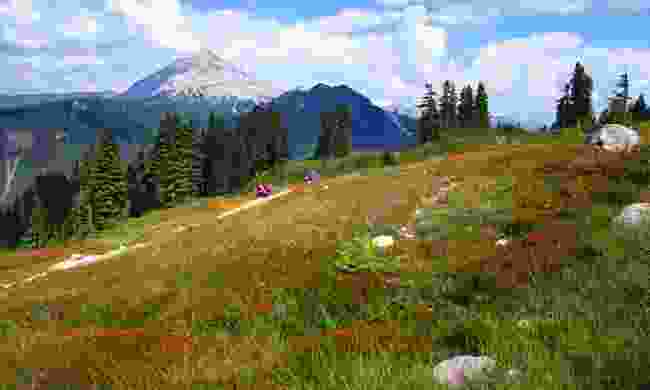 Explore the outdoors in spring to see wildflowers in bloom (Dreamstime)

April and May are marvellous months for heading to Canada, no matter whether your passion is culture, creatures, pistes or low prices.

For instance, even in spring Blackcomb and Whistler provide perfect powder-snow while Jasper’s Marmot Basin, high up in the northern Rockies, has Alberta’s longest ski season, as well as out-of-this-world star-gazing – Jasper is the world’s biggest Dark Sky Preserve.

At lower elevations, the Great White North is beginning to thaw, revealing wildflowers, lively forests and waking wildlife, and making more areas more navigable for roadtrips. Indeed, this is a great time for a fly-drive or motorhome adventure – vehicle hire and accommodation are more readily available than in high summer and are great value. Or opt for a rail ride: lengthening days mean more sightseeing hours, plus the iconic Rocky Mountaineer train is back on track in April after its winter break.

The west coast is especially mild in spring, making a city break in Vancouver – frequently named one of the world’s most liveable places – especially appealing. Further east, cosmopolitan and food-fabulous Toronto is warming up too, while Arctic icebergs are careening down the Newfoundland coast and whales are beginning to arrive off the Atlantic seaboard. Plan a multi-centre trip and, with luck, you might see both. 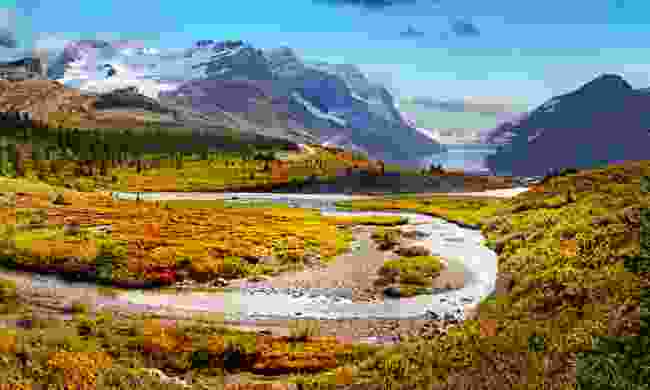 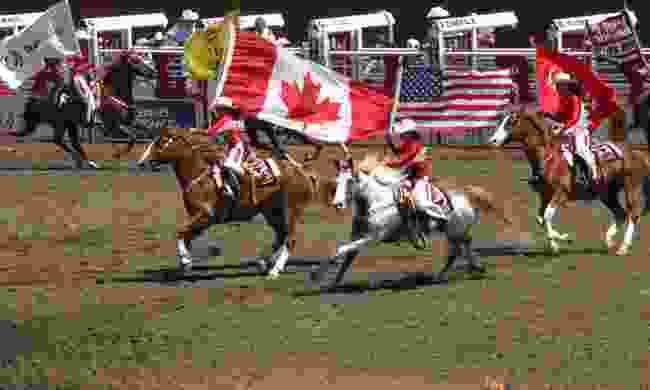 From June to early September it seems the whole of Canada flings off its coat and throws itself whole-heartedly into the hottest season.

There’s a real hunger for making the most of the sunshine, which might mean lolling on one of Vancouver’s eight city beaches, sipping vin blanc on an alfresco patio in Montréal, joining the fun of a major festival or heading off on a hike, bike or paddle into the great outdoors.

Hire a car or motorhome and explore. For example, blend the rodeo-raucousness of the Calgary Stampede (July) with a roadtrip through the Canadian Rockies, tracing the Icefields Parkway between Banff and Jasper, stopping to walk on glaciers, hike around lakes and look for bears. Alternatively, you could link Toronto, raging Niagara and the cooling Muskoka Lakes region; you might combine New Brunswick and Nova Scotia for Bay of Fundy whale-watching, gorgeous coves, kayaking and the world’s best lobster; or maybe focus on Québec, with its lively cities, delicious 'Franco-Canadianess', diverse wildlife and expanses of wilderness.

Yes, wilderness: if you want to experience this big country’s big countryside, summer is the time. It’s the best season for adventurous cruises along the Inside Passage or up in the Arctic, it’s the time to plan a canoe odyssey along the Yukon River or visit a remote floating lodge to search for bears. 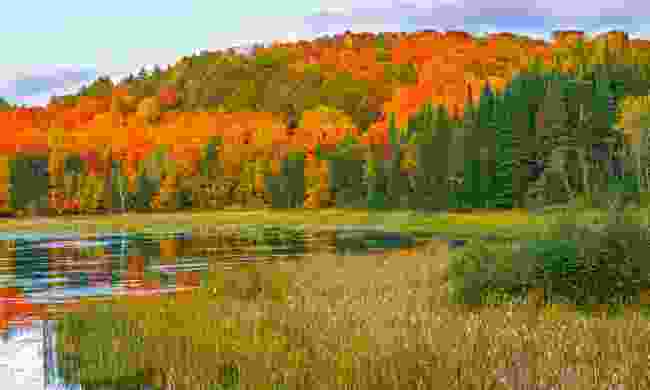 From mid-September the crowds diminish but Canada’s allure does not. Especially in the southern regions, the weather stays warm into October and, in places, forests start to flame in incredible colours.

For a full autumnal blaze, drive through Québec’s Laurentian Mountains, Ontario’s Algonquin Park or along Nova Scotia’s spectacular Cabot Trail. Or hop aboard The Ocean, the scenic train ride between Halifax and Montréal, which will deliver you right into fall-foliage splendour.

This is also the time to see the country’s vineyards heavy with grapes. Explore winelands such as British Columbia’s Okanagan Valley or Ontario’s Niagara Peninsula, visiting cellar doors for tours and tastings. And, while the weather is more variable in autumn, there are still opportunities for outdoor escapades – perhaps walks and bike rides amid those turning trees.

Autumn is a great time for wildlife too. September sees the peak of the salmon run, which draws large numbers of bears to rivers in British Columbia. In October, focus your attention on Manitoba, when the town of Churchill becomes ‘Polar Bear Capital of the World’: almost 1,000 of the magnificent mammals congregate around the town, from where tundra buggy tours head out to spot them. 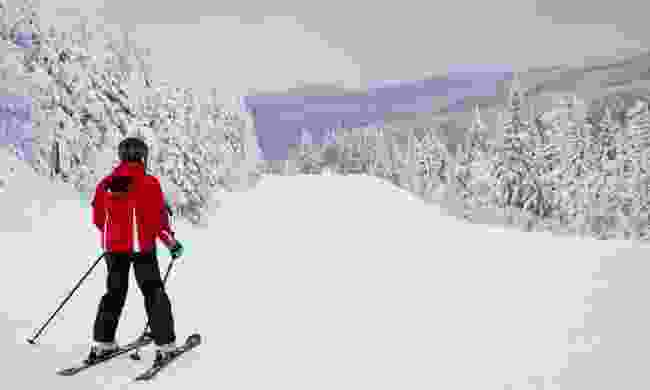 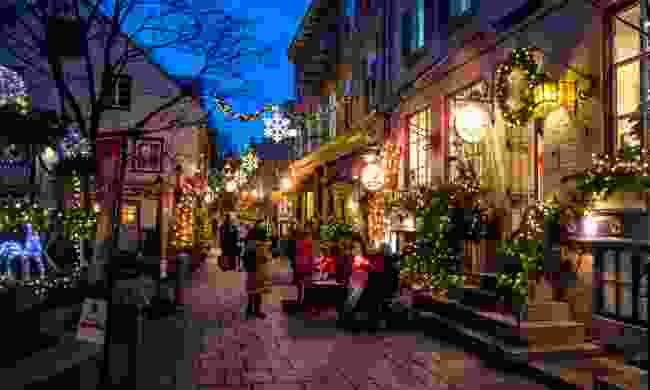 Brrrracing but brilliant – that’s the Canadian winter. Yes, it’s cold. However, the country is well used to it, so functions effortlessly despite the sub-zero climes. Canada also fully embraces all that white stuff.

The mountains, from the outskirts of Vancouver to Québec’s Mont Tremblant, are open for sports of all sorts. Some of the world’s best pistes for skiers and snowboarders are here – Whistler sees almost 12m of snow on average each year. Or you could head off on a heli-ski expedition to hit un-swooshed slopes.

Alternatively, plunge into the backcountry on snowshoes, zip about by snowmobile or learn to mush your own team of huskies. Head up into the more northernly regions – such as the Yukon or parts of Québec – and you may spy the northern lights.

The cities are fun now too. In December, with all the snow and twinkling lights, everything feels festive – visit Toronto for great Christmas shopping or keep warm in Montréal, where a vast network of stores, eateries and arts venues lies underground, so you can stay out of the cold.

In capital Ottawa you can lace up a pair of ice skates and glide along the frozen Rideau Canal. In Québec City you can join the jollity of Winter Carnival (February), with its snow sculptures and night parades, or stay just out of town in the Ice Hotel. Or catch an ice hockey game (the season runs October-April) to celebrate winter like a true Canadian.

Discover more that Canada has to offer