The most iconic experiences in British Columbia

Sandwiched between the Canadian Rockies and Pacific Ocean with plenty of outdoor adventures, postcard-worthy landscapes and fascinating First Nations sites, British Columbia is brimming with opportunities for unforgettable adventures. Plunge into the wilderness, set your sights on the ski runs or simply stroll between the vineyards with a refreshing glass of white in hand. Here are eight experiences to get you started…. 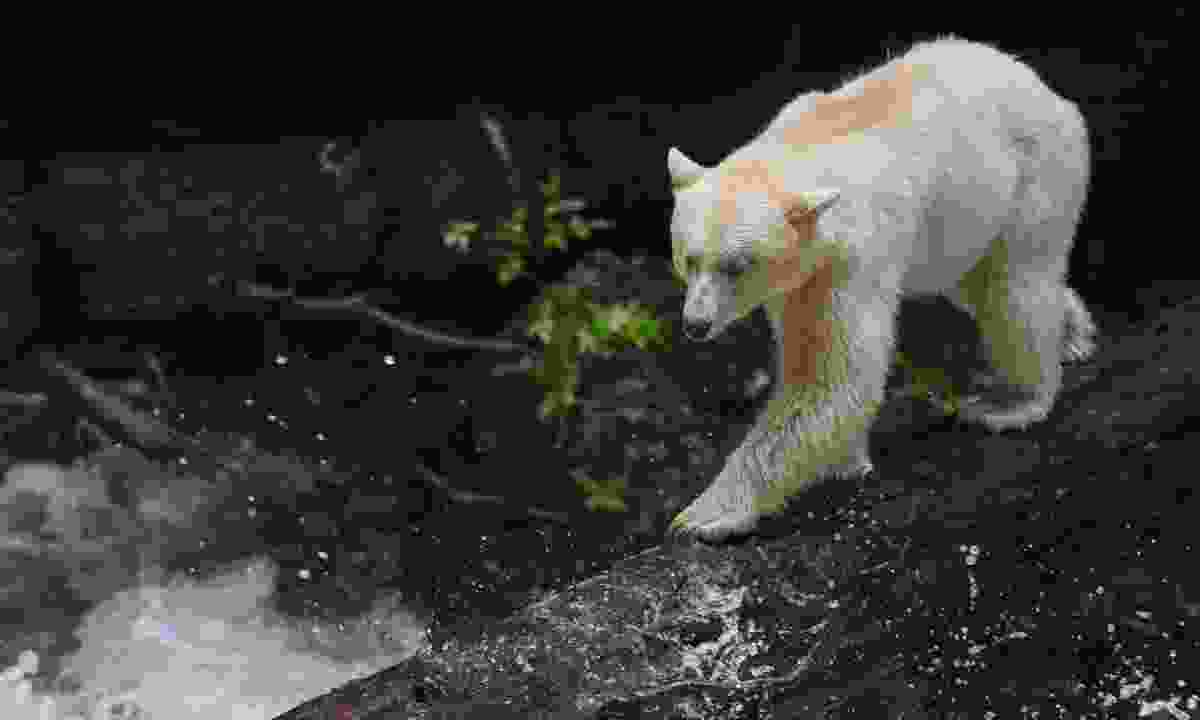 There’s no better place in Canada to spot wildlife than British Columbia. Thanks to its diverse landscapes, ranging from coastal rainforests and wild beaches to alpine meadows ringed with moss-clad peaks, a total of 1,100 different species of animals live here, including grizzly bears, eagles, wolves, moose, orcas, bighorn sheep and caribou. In the 16-million-acre Great Bear Rainforest, a protected sweep of old-growth trees, rugged islands and fjords, you can track down the elusive Kermode ‘spirit’ bear. This unique subspecies of black bear has unusual creamy-white fur, the result of carrying a recessive gene. As spirit bears can only be seen here, watching one in the wild is an exclusively British Columbian experience. 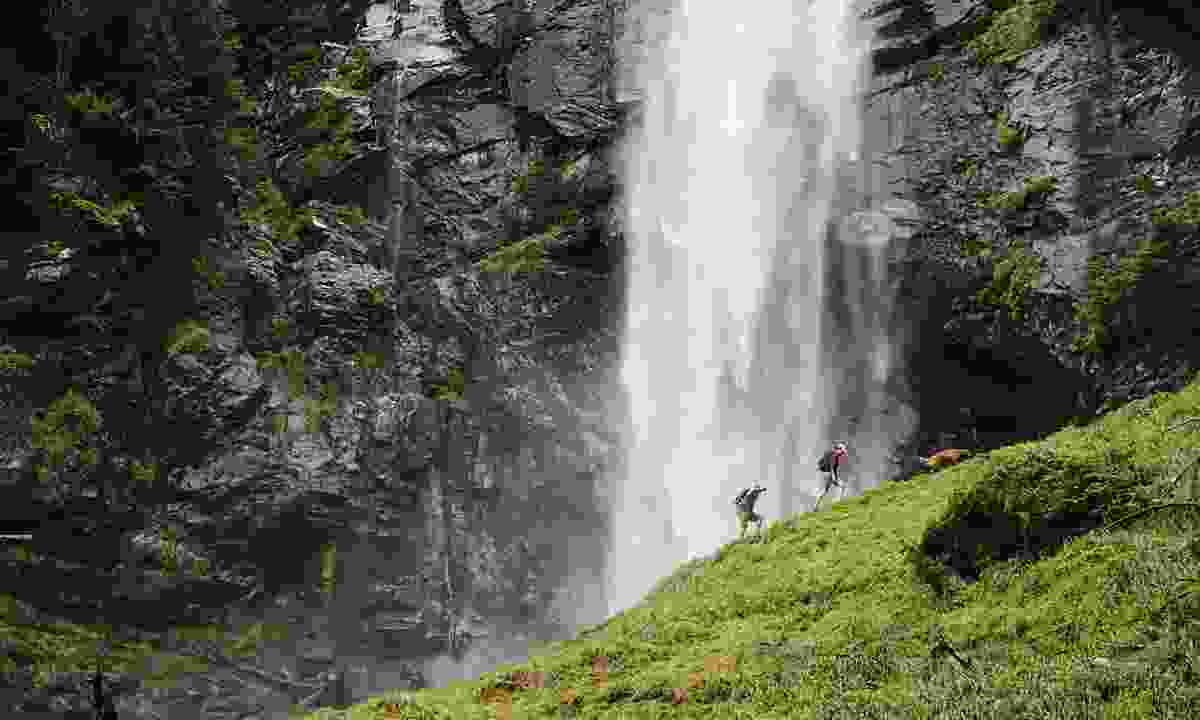 Whether you’re after a rugged alpine trek, a hike through the rainforest or simply a wander along the beach, you can find it in BC. There are hiking trails in almost all of its provincial and national parks, ranging from easy jaunts lasting less than an hour to multi-day backpacking trips. First-timers can start with a visit to MacMillan Provincial Park on Vancouver Island, where you can wander beneath enormous 800-year-old Douglas fir trees in a short loop at Cathedral Grove. On the other end of the spectrum, you’ll find the epic Sunshine Coast Trail stretching along the coast north of Vancouver – the longest hut-to-hut hiking trail in Canada. 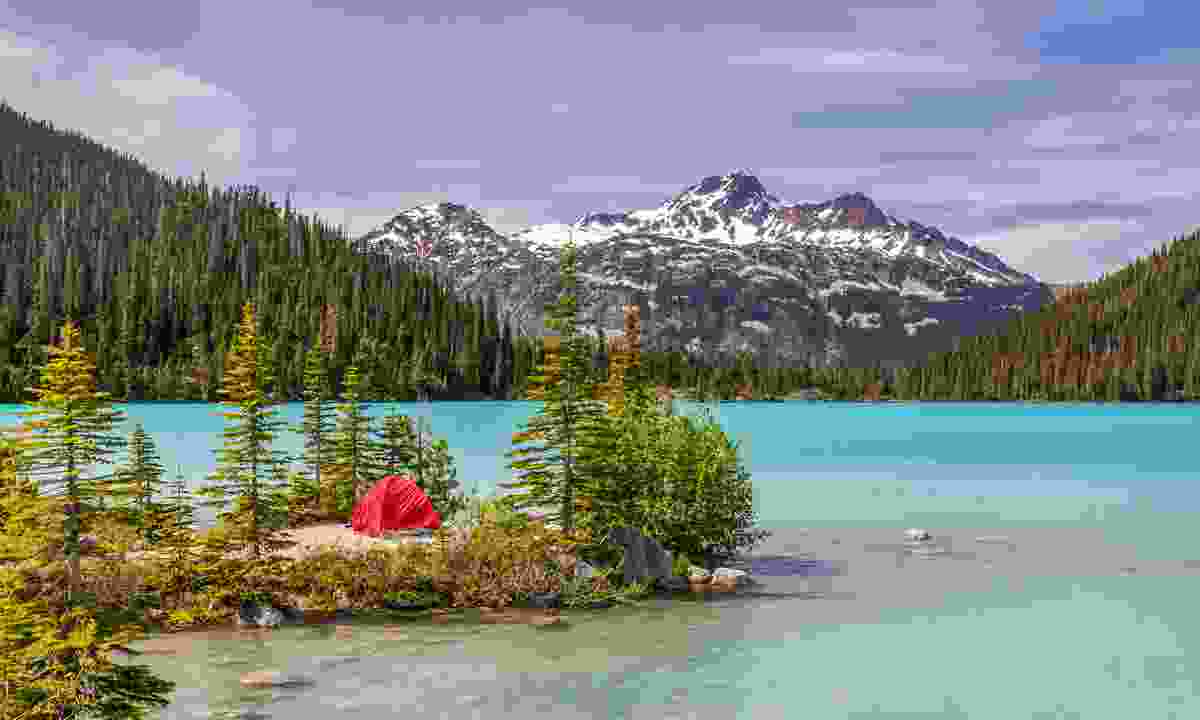 Camping is one of the most popular ways to experience British Columbia. After a day on the trail, you can choose to pitch up beside bubbling hot springs, toast marshmallows beside mirror lakes or watch for whales from a coastal camp. And there are options to suit everyone, from walk-in sites to remote backcountry pitches accessible only by boat. If you’re keen to answer the call of the wild, try camping on the driftwood-strewn sands of Naikoon Provincial Park in remote Haida Gwaai, where you can dig for razor clams for dinner. The land is the traditional territory of the Haida Nation, so you’ll also find cultural sites dotted throughout the area. 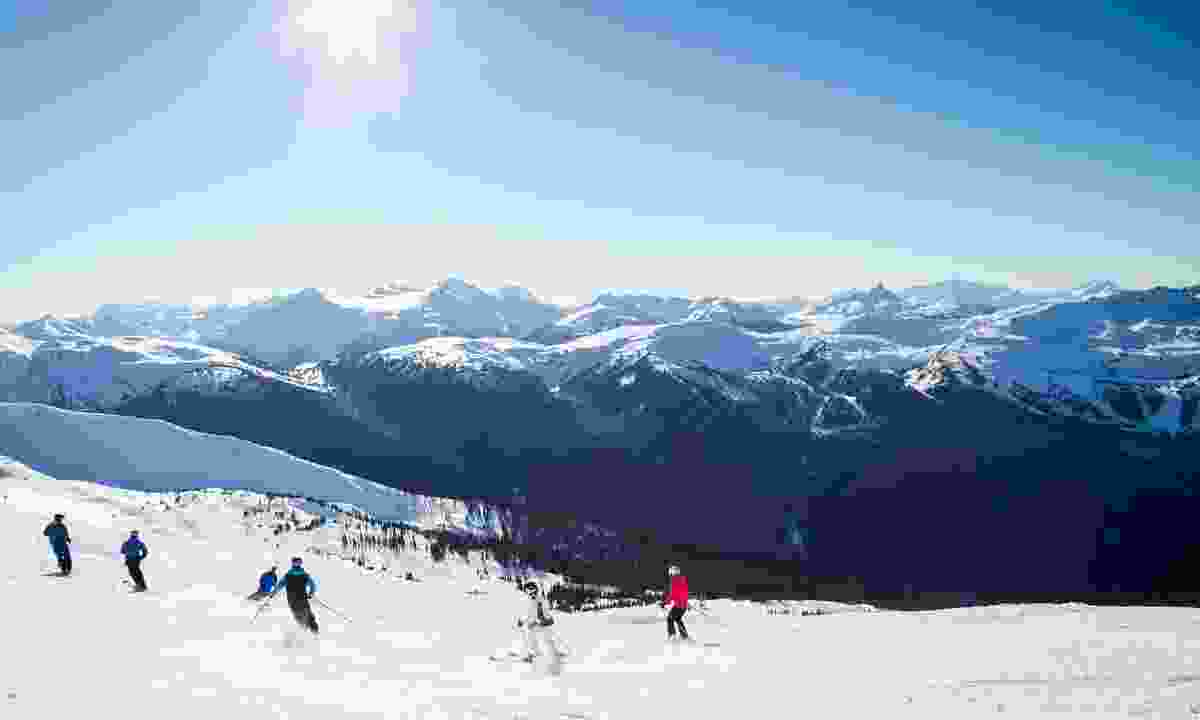 Skiiers at the top of Blackcomb (Shutterstock)

The annual arrival of the snow is the almost universal signal to pack your bags and head for the pistes. You’ll find ten mountain ranges and thirteen ski resorts across British Columbia – including the world-famous and truly thrilling Whistler Blackcomb. But skiing the slopes is not the region’s only winter lure: you can try almost any snow-based activity invented, from sleigh riding and ice skating to dog sledding, ice climbing and snowshoeing, battling your way through the chilly weather to the toasty wineries and even toastier hot springs. 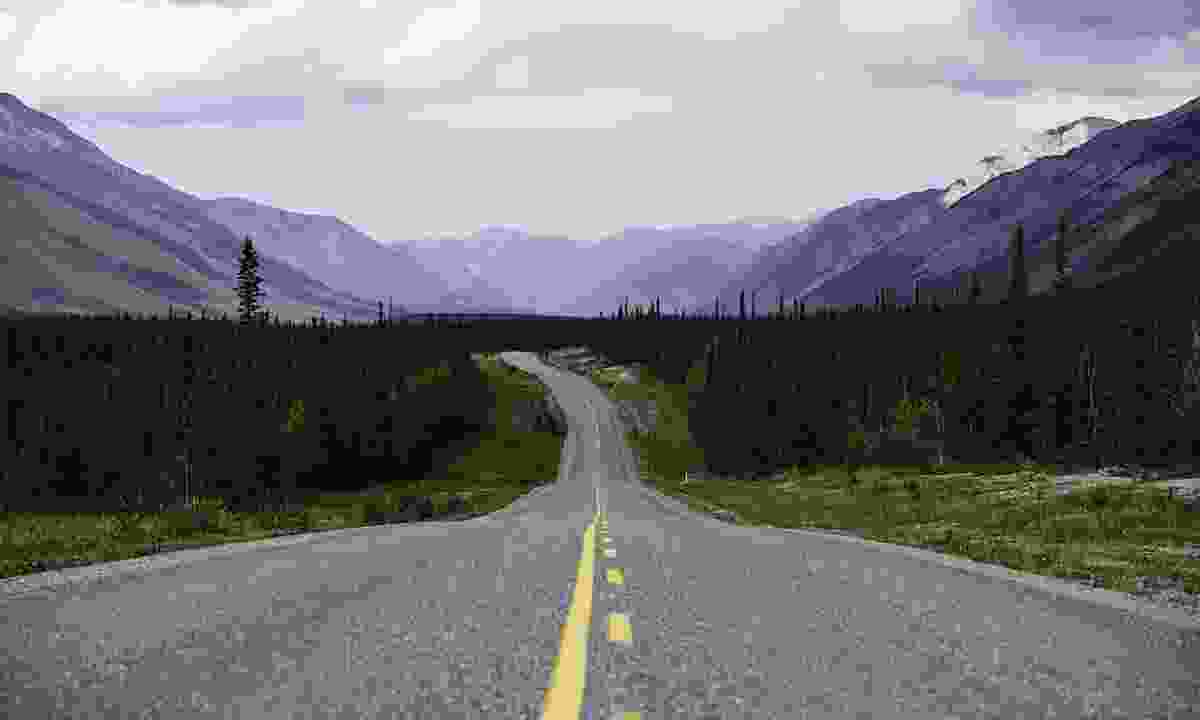 British Columbia is prime road trip territory. With your own wheels, you can travel between small towns with ease, explore the wilderness at your leisure and pause to take in the views. If you’re hoping for spectacular vistas you can’t go wrong with the Sea to Sky Highway, which travels 120 kilometres from Vancouver to Whistler along the coast. True to its name, this winding route whisks you higher and higher into the mountains with dramatic cliffs on one side and the rolling ocean on the other. For something a little more rugged, Route 97 can take you all the way from Dawson Creek up to Delta Junction near Fairbanks, via the wilds of northern BC. Stop off in Muskwa-Kechika Management Area, also known as the “Serengeti of the North”, to try your luck spotting grizzly bears, bison and moose from horseback. 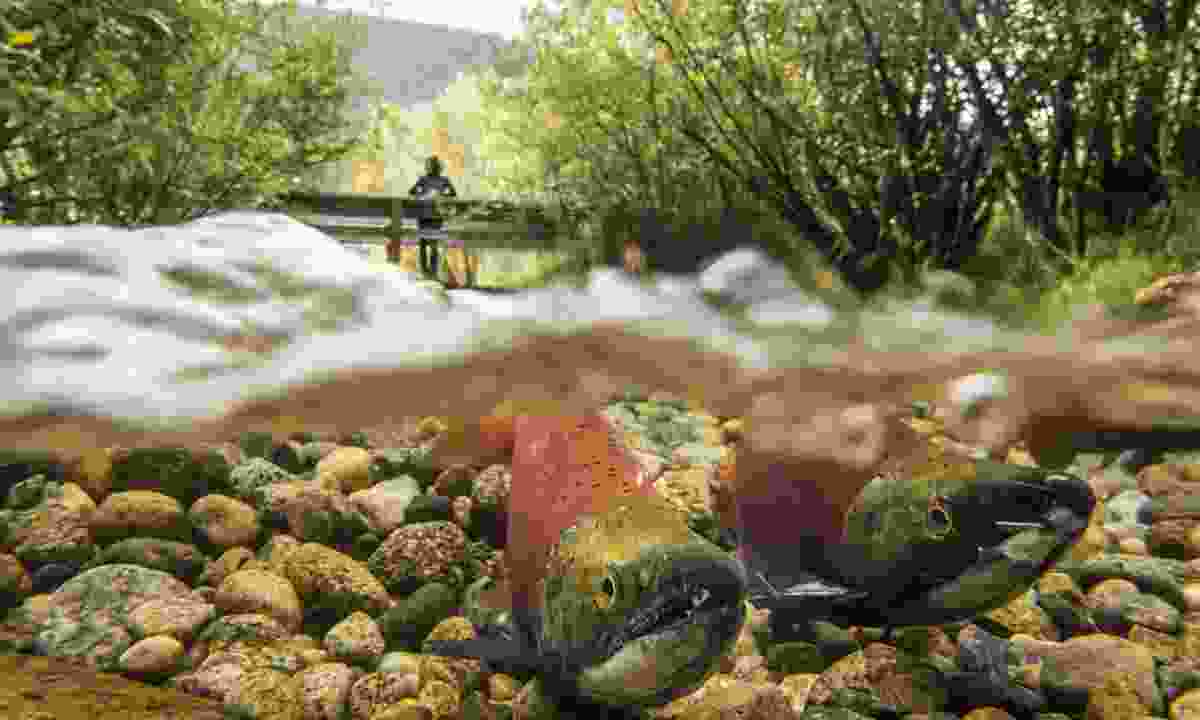 The 100-Mile Diet – in other words the idea that you should consume nothing grown farther than 100 miles from home – was coined by two Vancouverites. And true to form, British Columbia is renowned for its local culinary scene, characterised by artisanal producers and fresh, seasonal ingredients. Wild Pacific salmon is a regional staple and features on menus across the province, whether it’s served hot smoked by traditional First Nations communities or in sushi form in Vancouver, which has a strong Asian population. Here, alongside a medley of international flavours, you can discover the city’s imaginative fusion foods like Tojo’s BC roll, filled with barbecued salmon skin.

7. Sipping in the wine country 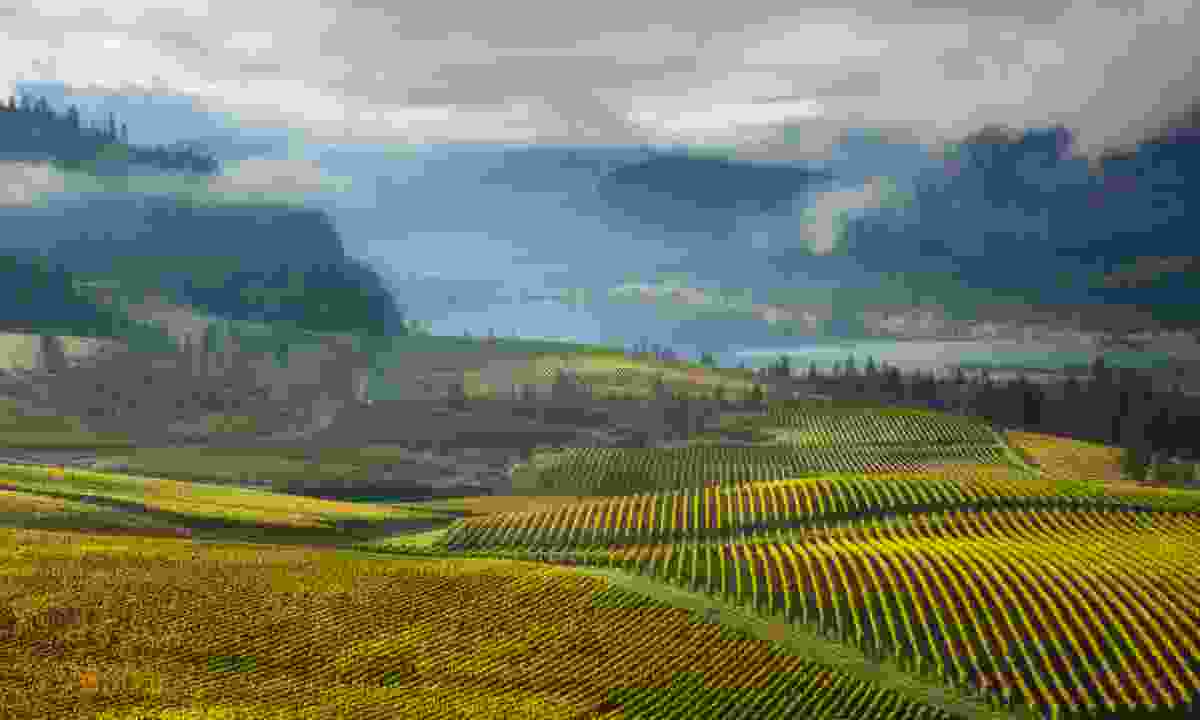 Wine tasting in the Okanagan Valley is one of the essential things to do in British Columbia. Many of the area’s 180 licensed wineries have won international awards, and sipping a crisp white or a full-bodied red here is a must. The Mission Hill Family Estate features among the frontrunners, and you can tour its underground barrel cellars before savouring a glass squeezed from the fruits of their five family-owned vineyards. But thanks to BC’s diverse range of soils, you’re not limited to the Okanagan if you’re tempted by the tipple. You’ll also find wine regions in the Fraser Valley, Gulf Islands and Vancouver Island, and there are emerging wineries in the Kootenay Rockies and Prince George. 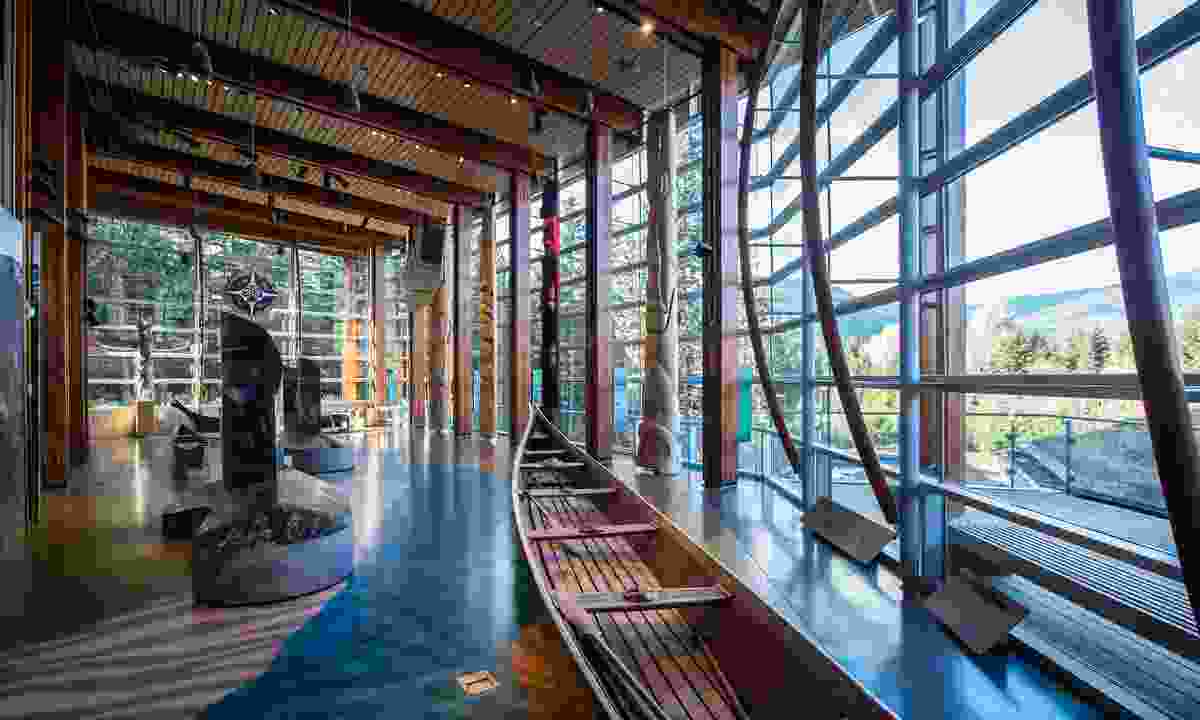 Home to more than 200 different First Nations, British Columbia is the most diverse province in Canada for indigenous peoples, and there are myriad ways to experience their unique cultures and traditions throughout the province. You can start with a visit to the Museum of Anthropology in Vancouver, where you’ll find an unparalleled collection of carvings, totem poles and artefacts, as well as Haida artist Bill Reid’s iconic sculpture Raven and the First Men. Over on the remote Haida Gwaii archipelago you can visit Gwaii Haanas National Park Reserve, which is only accessible by boat or plane. Here you’ll find a number of abandoned ancient villages among the trees, complete with moss-covered canoes, crumbling cedar longhouses and eerie mortuary totems.