9 of the best outdoor activities in Canada's British Columbia

From bear watching to cycling between the vineyards, here are nine of the best outdoor activities in wild but beautiful British Columbia...

British Columbia is one of the world’s great destinations for outdoor adventures, with misty rainforests, glacier-fed lakes and snow-dusted peaks combining to make a spectacular natural playground. From bear watching to cycling between vineyards, here are nine of the best outdoor activities to get you started.... 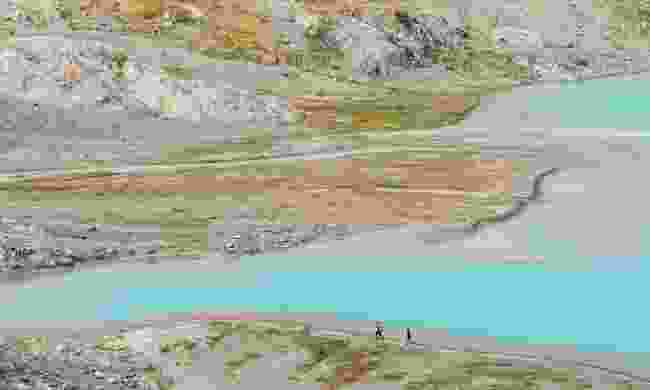 Lacing up your boots and hitting the trails is a classic British Columbian activity, and you’ll find everything from easy nature walks to multi-day hiking trips right across the province. You can go for a windswept wander along a pebbly beach, opt for a ramble through an old-growth rainforest or head up into the mountains for a high-octane hike via helicopter. An easy place to start is the Kettle Valley Rail Trail, a decommissioned railway track turned hiking route between Hope and Castlegar, east of Vancouver. Here, you can cross the wild Coquihalla River to see the historic Othello Tunnels, which were cut directly into the moss-clad cliffs. 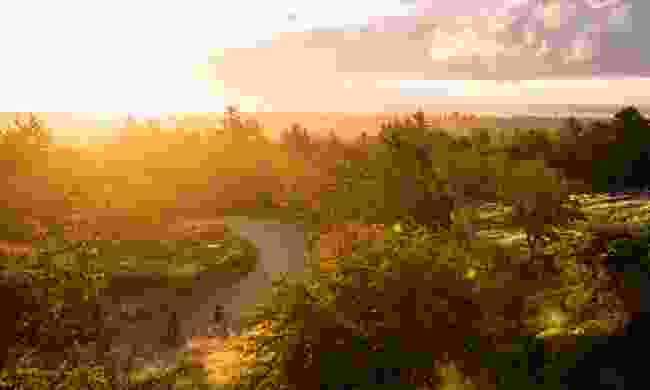 Those eager to explore BC on two wheels can take advantage of its network of bicycle trails, which range from leisurely cycling routes to high-calibre downhill tracks. On Vancouver Island, the pretty Cowichan Valley Trail whisks you through old-growth rainforest to the historic Kinsol Trestle, built in 1921 and one of the largest of its kind. Alternatively, pair cycling with wine (in that order) with the International Hike and Bike Trail, an eleven-mile stretch between Osoyoos and Oliver in the Okanagan Valley. This route will lead you past eleven wineries, including Burrowing Owl Estate Winery and Inniskillin Okanagan Estate. Travelling on horseback is one of the easiest ways to explore British Columbia’s backcountry, and you’ll find equine expeditions and guest ranches across the province from the Rocky Mountains to the Cariboo Chilcotin. In the latter, Tyax Lodge & Heliskiing is a great ranch to head off from as you explore the gradually sloping mountain trails, with impressive views over the valley below. In northern BC, you can saddle up to explore the remote Mushkwa-Kechika Management Area, also known as the 'Serengeti of the North', and try your luck spotting grizzly bears, caribou, bison and moose. Alternatively, take the reins on a horse-supported trip to the Rainbow Range in Tweedsmuir Provincial Park in central BC, where you can explore its colourful volcanic ridges and unique geothermal formations without worrying about carrying a heavy pack. 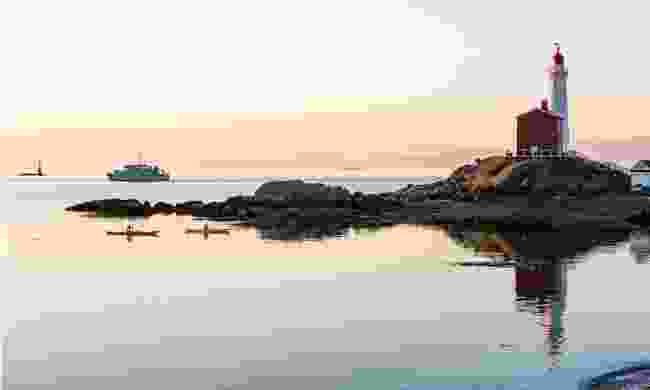 Wherever you are in British Columbia you’ll never be far from water, and the best way to explore is in a kayak or canoe. Scattered across the west coast of Vancouver Island, the Broken Group archipelago is one of the best places for a paddle, with isolated sea caves, lagoons full of marine life and ample opportunities to camp directly on the beach. Meanwhile, the Johnstone Strait along the northeast coast of the island is world-renowned for its resident population of killer whales, and you can float alongside them on a guided trip from Telegraph Cove.

5. Gazing at the night sky 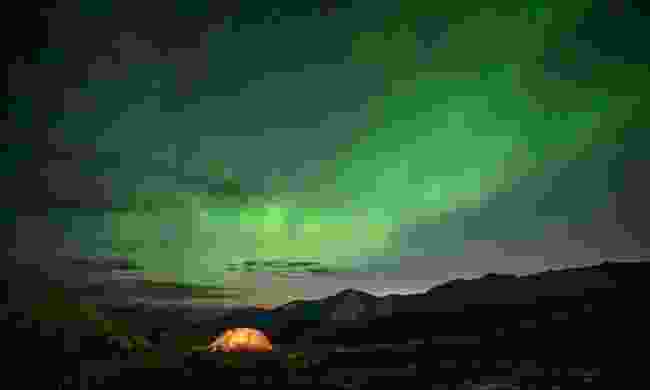 With countless dark, open areas to take in the beauty of the night sky, British Columbia is a stellar choice for stargazers. Porteau Cove Provincial Park, around an hour’s drive north of Vancouver, is one of the most popular spots to stargaze near the city as it’s shielded from light pollution by mountains, while Victoria on Vancouver Island is home to Cattle Point Urban Star Park, an official Dark Sky reserve. Of course, this far north the stars may not be the only thing you see. For the best chances of catching the northern lights, visit Muncho Lake Provincial Park in northern BC, where sightings are reported year round. 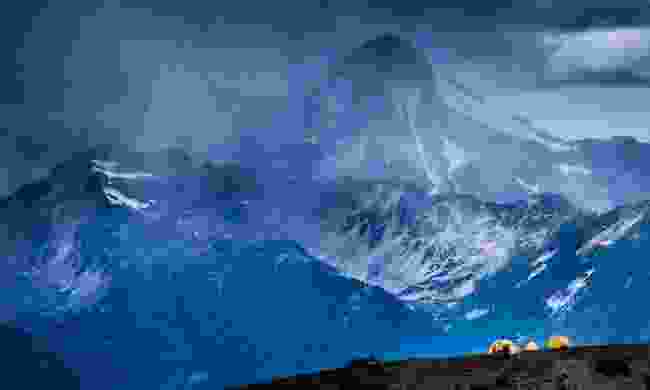 Like hiking, camping is an almost essential activity in British Columbia and one of the best ways to connect with the great outdoors. You can fish for your dinner from a lakeside plot, stargaze from a lofty alpine ground or pitch a tent beside the rainforest and spend an afternoon watching wildlife. At Wya Point Resort near Ucluelet, you can set up beside a sandy cove and spend hours peering into rock pools. For a longer trip, head to Mount Robson Provincial Park in the Rockies for a couple of days of camping along the trail to the brilliantly turquoise Berg Lake. Or for something really adventurous, set off on one of Destination Canada’s newest 'signature experiences' with Hastings Overland on a camping trip, where you're given a fully-kitted jeep and a bespoke itinerary that sees you off-roading and camping out in British Columbia's backcountry. 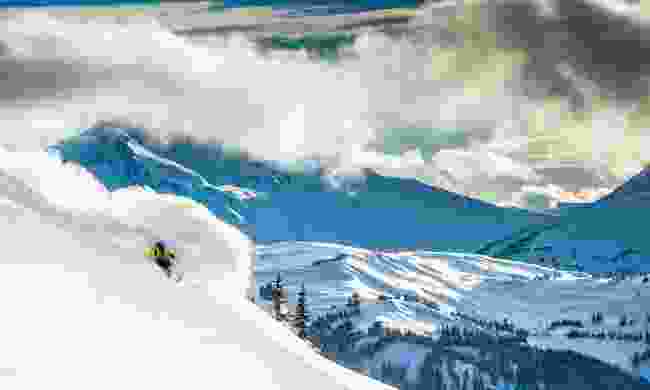 Every winter, the arrival of the snow results in a flurry of activity around BC’s mountains, where you’ll find everything from skiing and snowmobiling to dogsledding suddenly on the cards. If you’re eager to conquer the pistes you’ll have thirteen major resorts to choose from, ranging from world-famous Whistler Blackcomb, the province’s premier resort, to the high-alpine bowls, chutes and gullies of Kicking Horse Mountain Resort near Golden. For a more sedate experience, try snowshoeing in the Ancient Forest near Prince George, where you can follow animal tracks between gigantic cedars estimated to be over a thousand years old. 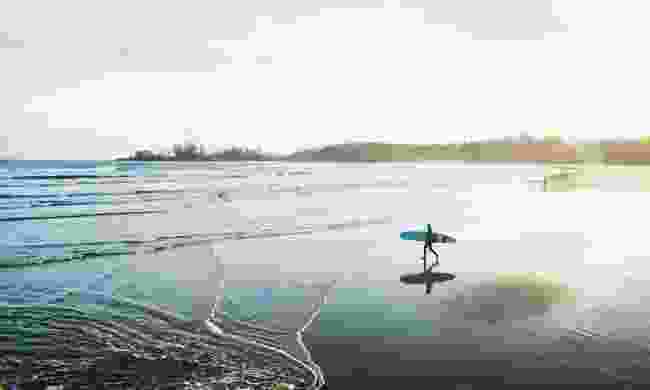 Surfer on the beach in Tofino (Destination BC/Ben Giesbrecht)

British Columbia may not be the first place that springs to mind when you think of surfing, but it’s possible to catch reliable swells in various places along the coast. Tofino is British Columbia’s year-round surf capital, on Vancouver Island’s western shore, and you’ll find over twenty miles of sandy beaches here alongside tiny outlets offering lessons and equipment rentals. Keep an eye out for grey whales between March and April, as their migration will bring them close to shore. For a more adventurous experience, you can try uncrowded North Beach on remote Haida Gwaii during the surf season, which usually falls between November and March.

9. Leaning into the wind 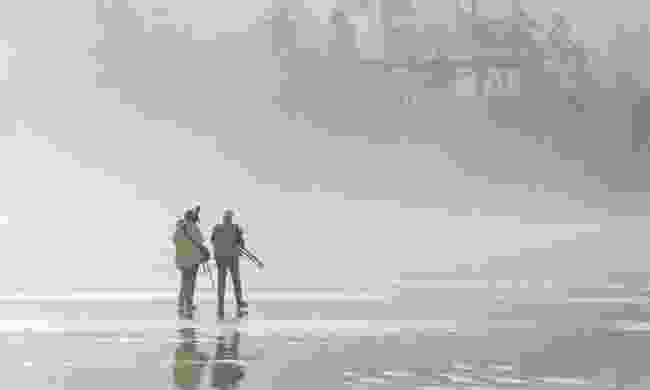 On the west coast of Vancouver Island, the arrival of autumn means one thing: storm-watching season. At this time, tremendous gales whip across the Pacific Ocean and batter its strip of exposed coast, with winds powerful enough to bend trees, waves rolling in up to six metres high and horizontal rain falling in heavy sheets. You can experience the full force of nature by leaning into the wind on Chesterman Beach, where storm watching on the island began, or head farther south to Cox Bay Beach for the area’s tallest waves. When the show’s over, warm up beside a crackling wood fire at the oceanfront Wickaninnish Inn.