Rural Japan: Your 4 day guide to Japan's prefectures of Nara and Wakayama...

When it comes to Japan, travellers often stick to the big name destinations such as Tokyo, Osaka and Kyoto. But Japan’s lesser-explored countryside has just as much to offer...

When it comes to exploring Japan, travellers often stick to the big name destinations such as Tokyo, Osaka and Kyoto. While there’s certainly plenty to see in these well-known cities, Japan’s lesser-explored countryside has just as much to offer and can be an extremely rewarding experience, and also offers the space for social distancing.

In fact, the rural prefectures of Nara and Wakayama – tucked up beside Osaka in the Kansai region of Japan – have so much history and culture, it’s surprising more travellers don’t visit. Their easy-to-reach location means they make an ideal add-on to any traditional itinerary, while their sprawling scenery and ancient temples show a side of Japan that the bigger cities can’t provide.

Here’s how to get the best out of Nara and Wakayama over four days. With direct trains from Osaka – and a great public transport network while you’re there – it couldn’t be easier to explore these prefectures... 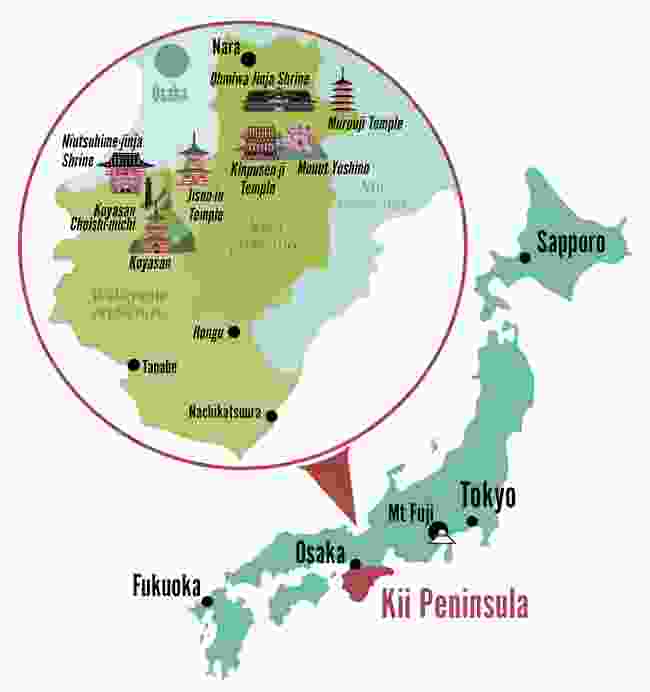 Explore the many temples of Nara and Wakayama (Shutterstock)

Start in the city of Sakurai in Nara, where you’ll find Ohmiwa Jinja Shrine – thought to be Japan’s oldest Shinto shrine. It stands at the base of Mount Miwa, shrouded in cedar forest that casts sunlight onto the thatched roofs. The shrine’s exact age is unknown but it predates the custom of having deities enshrined in the main hall and instead directs worship to the mountain that towers behind it.

To reach the shrine, take a train to Miwa station or – if you’re feeling adventurous – instead alight at Tenri station and follow the Yamanobe-no-michi walking trail through the rural countryside. This well-signposted route follows part of Japan’s most ancient road for around 10km passing shrines and wooden houses standing  among the rice fields.

Once you’ve explored the shrine’s elaborate grounds, grab lunch at Senjutei (293 Shiba, Sakurai-shi), a 10-minute walk away: Miwa is said to be the birthplace of somen (thin wheat flour noodles),so where better to sample them than in one of the city’s oldest noodle restaurants? Nearby, you’ll also find Imanishi Sake Brewery. The brewery is particularly renowned because not only is it Miwa’s only sake brewery, but Miwa is said to be where the god of sake resides, which is why you’ll find sake breweries across Japan with sugidama (cedar branches wrapped into balls) hanging from their doorways – the branches taken from the cedar forests surrounding Ohmiwa Jinja Shrine. You can enjoy an hour’s tour of the brewery, followed by sake tasting.

Finish your day in the beautifully preserved Edo merchant town of Imaicho in the city of Kashihara – a 30-minute train from Miwa. Explore the narrow streets, then grab dinner at Tama (4-5-14 Imaicho), a restaurant that serves French cuisine in a traditional kominka (literally translated as old house). Try their five-course set menu (6,000 yen), though make sure you book in advance. 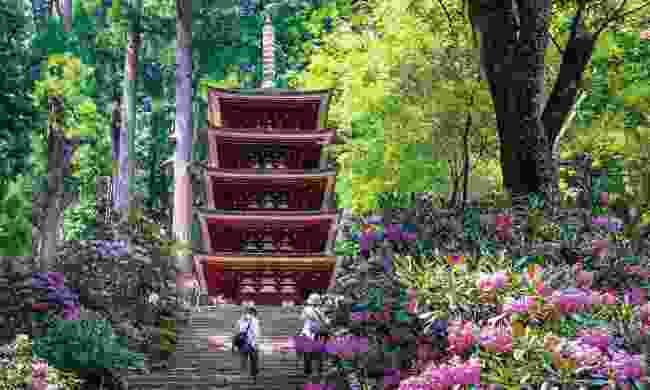 Get up early and head by train to Murouji Temple in the city of Uda, a rural region in the east of Nara where clusters of farmhouses dot the rice fields and the surrounding mountains. Here, you’ll find Murouji Temple, built in the 9th century as one of the only temples that welcomed women, hence it’s other name, Nyonin-Koya (Women’s Koyasan). To get there, either take a short bus from Muroguchiono station, or follow  a two-hour trail on foot through the countryside – much of it alongside a gently meandering river. The temple stands in an ancient cedar forest, with a five-story pagoda behind, painted scarlet red. It’s a sight to behold all year round: in summer, the pagoda is framed by pink rhododendron while autumn sees it surrounded by flaming red and orange leaves.

Spend an hour or two at the temple, then catch a train to Yoshino in Nara’s south, changing at Yamato-Yagi station. Yoshino is renowned for having 30,000 cherry blossom trees that blanket the eponymous mountain, as well as numerous temples and shrines. The most prominent is the UNESCO-listed Kinpusen-ji Temple, home to one of the largest wooden structures in Japan at 34m. You can ride the short ropeway (cable car) from Yoshino station to get there, floating high above the blossoms. 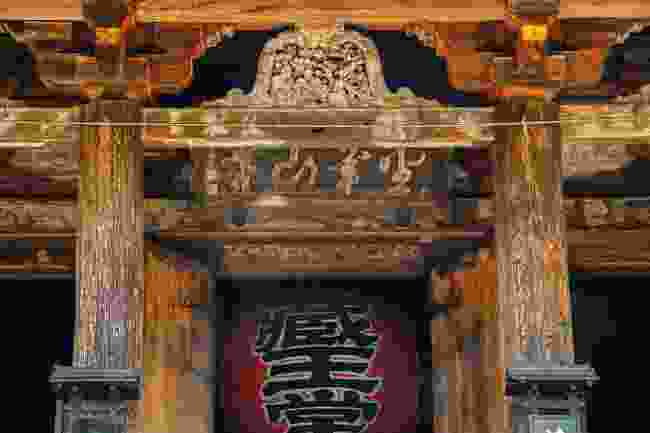 Once you’ve looked around the temple grounds (and perhaps ventured further up the mountain to Yoshino Mikumari-jinja Shrine) wander back into town and try your hand at traditional paper making. Yoshino is famed for its delicate washi paper, which you can craft for yourself at local shop Fukunishi Washi Honpo (218-1 Kubogaito). They have been using mulberry bark and local river water to craft paper for over six generations.

In the evening, check into Ryokan Kato (kato-yoshino.jp) in the heart of town. At this traditional Japanese inn, you can spend the night sleeping on tatami mats, with a beautiful dinner and breakfast of rice and wild mountain vegetables. 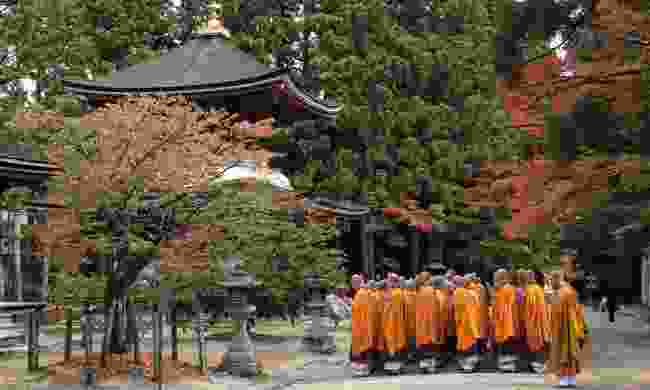 If there’s one site Wakayama prefecture is known for, it’s Koyasan: a UNESCO-listed, temple settlement deep in the mountains, considered the heart of Shingon Buddhism. The best way to get there is by Tenku sightseeing train, which you can board at Hashimoto station. The train winds through the countryside, with big windows to take in the seasons. Either ride it directly to Koyasan (swapping at Gokurakubashi station for the cable car), or get off earlier at Kudoyama station and follow some 20km of hiking trail the rest of the way. The trail – a 1,200-year-old pilgrimage route known as Koyasan Choishi-michi – begins at Jison-in Temple which is worth a visit in its own right. Until the 1800s, women (including the founder of Koyasan Kukai’s mother) weren’t allowed to worship at Koyasan, so many visited Jison-in Temple instead. Today, in homage to its past, thousands of breast-shaped offerings hang around the grounds to pray for women’s health. 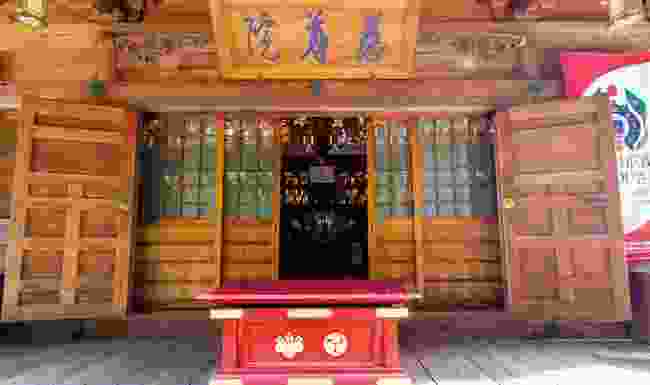 When you arrive at Koyasan, save exploring the temple complex for tomorrow and instead rest your legs at one of the 51 shukubo (temple lodgings) that can be found in the area. This is a chance to spend the night in a temple, sleeping and eating shojin ryori (a colourful spread of vegetarian Buddhist cuisine) for dinner and breakfast. Some temples also offer the opportunity  to join an early morning worship and to try ajikan, a form of Shingon meditation that is designed to relax and train the mind. The Koyasan temple complex stands over 800m above sea level in the lush and pristine Koya-Ryujin National Park. It is believed that the eight peaks and basins that make up Koyasan resemble a lotus, making it an auspicious location in Buddhism.

Start your day at Daimon Gate – the main entrance to Koyasan, with a 25m-tall wooden structure flanked by guardian deities. Follow the footpath to Danjō Garan: a temple complex marking the centre of Koyasan, with a red stupa that towers over the surrounding temples. This was the first complex built by Shingon Buddhism’s founder, Kōbō Daishi Kukai. 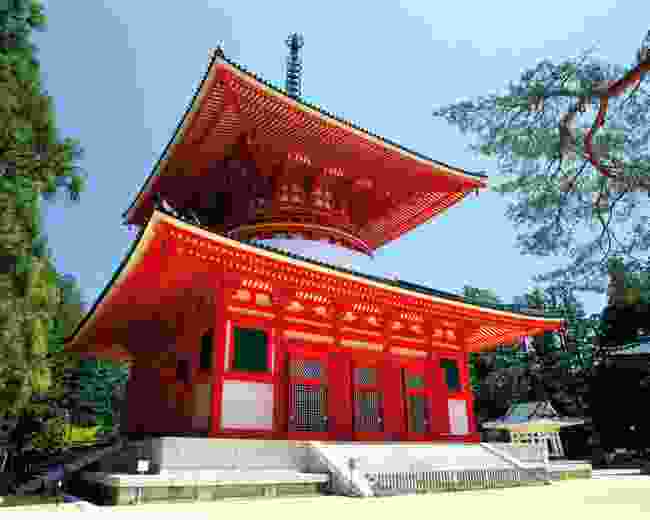 Continue on foot, or rent a bicycle and an audio guide from the Koyasan Shukubo Association Office to see more temples. Visit Okuno-in, where Kōbō Daishi Kukai is enshrined, near a hall where thousands of lanterns burn in his honour. This is also the final resting place of over 200,000 folks, monks and samurai lords who when they died, chose to have their ashes and a small bone from the neck (a bone that is sacred as it resembles the Buddha in prayer) buried near Kōbō Daishi Kukai. Some of the graves are marked by tall tombstones and elaborate stupas. Shingon Buddhism followers also believe that rather than being dead, Kōbō Daishi Kukai is in a state of ‘eternal meditation’, bringing relief to those who ask for it, which is why travellers come here from far and wide to pray for their departed relatives. Considering this is Japan’s largest cemetery, it doesn’t feel at all eerie. Instead, there’s a real sense of spirituality and calm at Okuno-in – a feeling that will stay with you long after your visit. 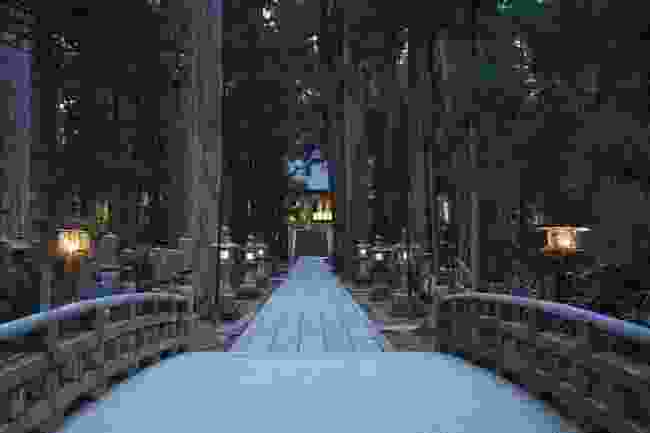 The path to Okuno-in (Wakayama Prefecture)

Travel confidently post-covid: There are Covid measures in place across Nara and Wakayama such as ventilation, temperature checks and limits on the number of guests to temples and other sites, as well as hand sanitiser stations and face masks. So when you’re ready to travel again, you can be sure that your trip here will be as safe as possible.

Start planning your own dream trip to rural Japan

Feeling inspired? The official sires for Wakayama and Nara offer heaps of inspiration and information to help you plan your perfect escape to Japan.