CULTURE GATE to JAPAN: Embark on a diverse cultural journey through Okinawa and Chubu

With Japanese culture-inspired art exhibitions installed in Naha Airport and Chubu Centrair International Airport, you can start exploring Japan's culture literally from the moment you land...

Most visitors to Japan simply pass through airports on their way to enjoy the country’s iconic cities and landscapes. The CULTURE GATE to JAPAN project has been set up to enrich that transition, exhibiting artworks by cutting-edge creators inspired by Japan’s diverse regional crafts. Eight venues have been chosen for the project, each showcasing their local culture and history.

Chūbu Centrair International Airport and Naha Airport are just two of those venues. While Chūbu is the gateway to Japan’s mountainous interior and samurai culture, Naha is in the subtropical islands of Okinawa around 1,000km to the south, with a rich indigenous culture and long history as an independent kingdom.

Read on top discover two incredible contrasting cultural journeys through the regions of both Chubu and Okinawa... 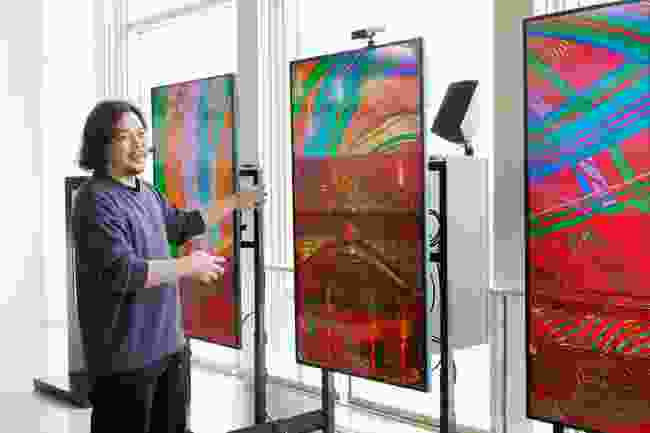 Naha is the capital city of Okinawa prefecture, on the archipelago’s largest island. For centuries it was the centre of the Ryūkyū Kingdom, with crafts and cuisine created by the mix of indigenous culture with Japanese, Korean, Chinese and southeast Asian influences.

Naha’s Shurijō (Shurijō Castle), with its iconic red-lacquered main hall, served as the royal palace. Destroyed in 1945 and rebuilt in the 1990s, the much-loved castle was lost again in 2019 in a fire. While it’s under reconstruction, visitors can explore a digital 3D model of the castle at Naha Airport, Okinawan visual artist HIGA Satoru’s contribution to the Culture Gate project. 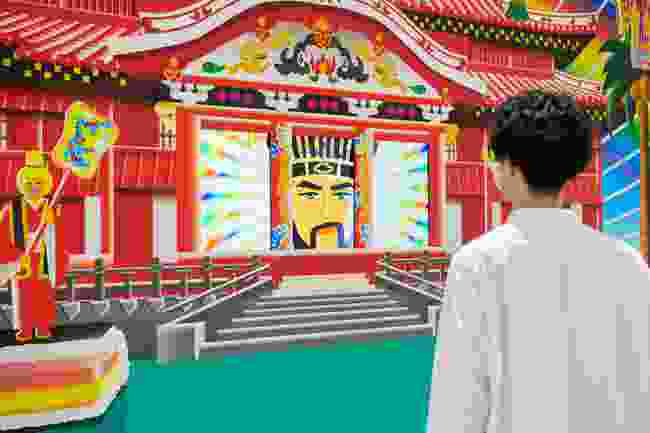 Exploring the theme of MEMORY, like HIGA Satoru, animator nuQ has created a vibrant mural in the airport. In her retro, pop-art style the animator has created a playful piece which explores how Okinawa’s history mixes with its modern incarnation as a beach resort destination.

Continue your cultural journey through Okinawa... 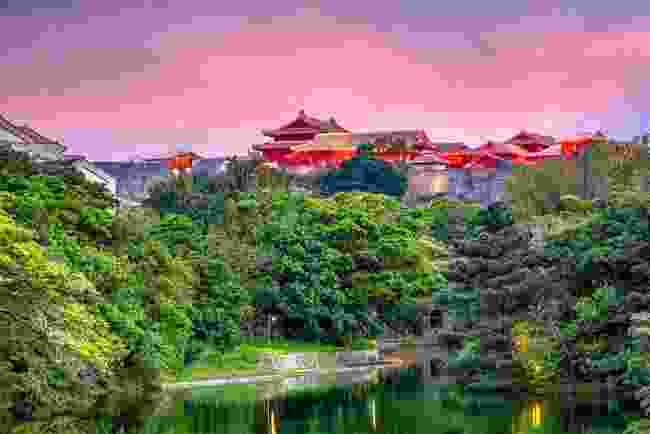 Okinawa is known throughout Japan for its pristine beaches and excellent diving. But there’s more to the islands than white sand and palm trees, including a fascinating indigenous culture and history. Here are five of our favourite cultural experiences in Okinawa...

The prefectural museum in Naha is a huge building, influenced by the archipelago’s native gusuku (stone castle) building style. Within its sloping limestone walls you’ll find a vast collection relating to Okinawa’s traditional crafts, ethnographic history, nature, contemporary art, and much more. It’s the ideal place to learn about the islands’ unique culture before you explore further afield. There are free English-language audio guides, too, so you can get plenty of context for the exhibits.

2. The Peace Memorial Park and Museum 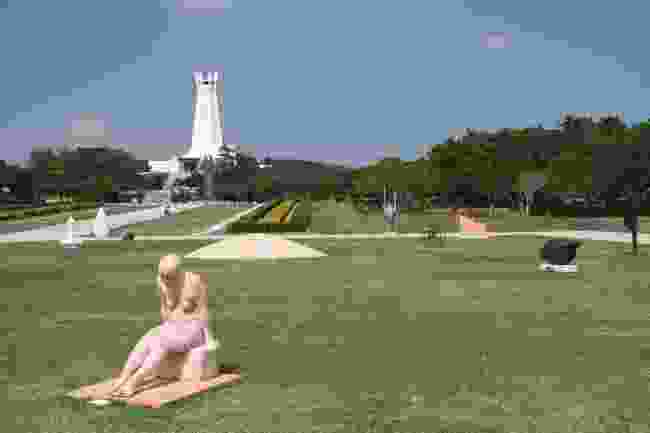 The Battle of Okinawa in 1945 was the largest-scale campaign of the Asia-Pacific War. Over three months, upwards of 230,000 people died – 120,000 of them civilians. Bombing was so intense that many irreplaceable cultural artefacts were destroyed, and the landscape disfigured. This coastal park contains memorials to those who lost their lives, as well as welcoming open spaces for people to enjoy the beautiful scenery and peaceful atmosphere. For historical context head to the museum, where exhibits, including individual testimonies, are fully explained in English as well as Japanese. 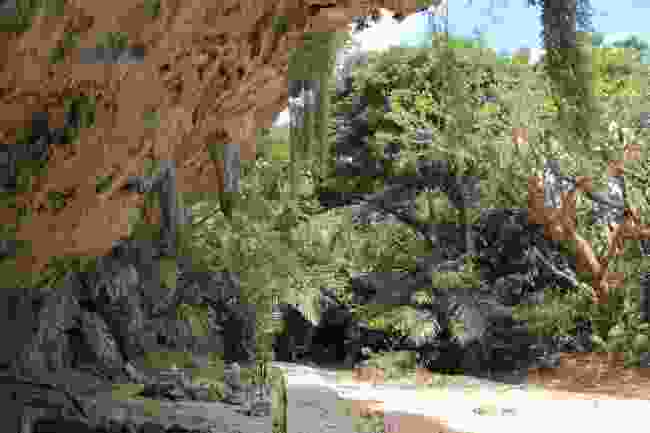 On a forested hillside in the south of Okinawa’s main island, Sefa-utaki is an important site for the archipelago’s indigenous religion. Usually called niraikanai Shinkō or Utaki Shinkō, this religion focuses on the spirits of nature and our ancestors, and was historically overseen by priestesses. The UNESCO-listed site, which is hidden away on a forested hillside, comprises several intriguing rock formations and stone altars. It’s an especially important site – from the fifteenth century Sefa-utaki was the main place of worship for Ryūkyūan kings, with the head priestess also a member of the royal family. 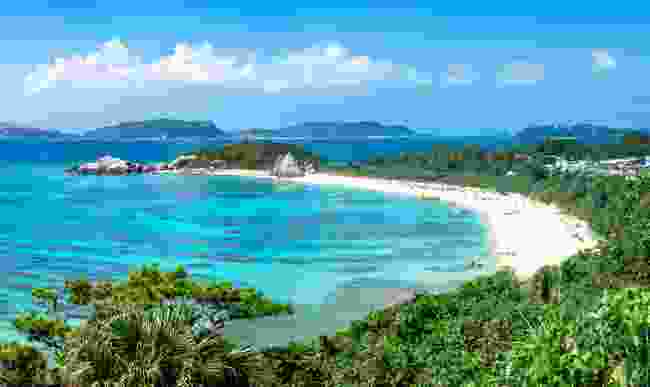 Tokashiki island is part of the Kerama Islands (Shutterstock)

The closest island group to Naha, the Keramas feel a world away from the bustling city. They’re the ideal place to experience Okinawa’s beach resort side, with more than enough patches of white sand for everyone. Zamami-jima, the main island, is an excellent snorkelling and diving destination, with its extensive coral reefs, and also a perfect spot for watching humpback whales migrating from January to March. Smaller, sleepier Kume-jima is worth visiting just for Hate-no-hama, an idyllic 7km-long sandbar in the azure waters. 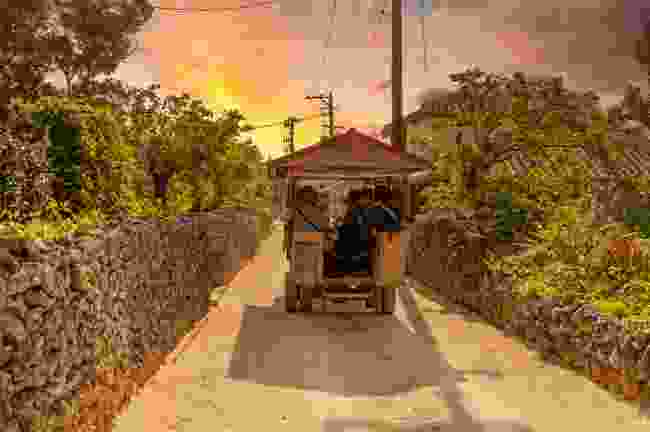 Soak up Taketomi's traditional architecture from a buffalo-drawn cart (Shutterstock)

As Japan’s westernmost islands, it’s no surprise that the Yaeyamas have a slightly wild, frontier feel. Each island has its own distinct attractions – there’s enough to do here to fill a whole trip. The main island is Ishigaki, known for its cultured black pearls, scuba diving spots and photogenic Ugan-zaki lighthouse. Neighboring Iriomote is a forest-tangled wilderness, protected as a national park and with reclusive Iriomote cats slinking between the trees. Taketomi-jima is the best place to go to see traditional Ryūkūan architecture, possibly as you trundle past in a buffalo-drawn cart. Finally, Yonaguni boasts some of Japan’s most beautiful and secluded beaches, and is the country’s most westerly inhabited point – some 2,000km away from Tokyo. 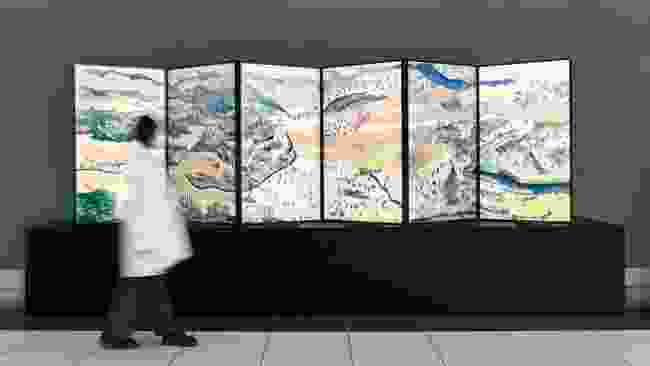 Chubu Centrair International Airport is the gateway to central Japan, a mountainous region home to ski resorts and samurai strongholds, remote villages and hot-spring towns. The area is also associated with two icons of Japanese culture: samurai and ninja.

The two had very different roles in Japanese society. ‘Samurai’ was actually the name of a social class, below only the Imperial Court, shōgun (head of the military government) and daimyō (warlords). Many of history’s most notable samurai came from Chūbu, including Oda Nobunaga, Toyotomi Hideyoshi and Tokugawa Ieyasu – Japan’s three “Great Unifiers”.

Ninja were employed for covert attacks and spying, which would be dishonourable for samurai. Their techniques were shrouded in mystery, and they were rumoured to possess supernatural abilities like invisibility and walking on water. The two most prominent ninja schools were in Chūbu, in Iga and Kōka.

The artworks on display in the airport explore these figures through the theme of MOTION. Creative group EUPHRATES’ installation uses moving points of light in the darkness to map the stealthy movements of ninja. SHIGETA Yusuke’s work is inspired by samurai, rendering the historic Battle of Sekigahara in a folding screen-style animation. 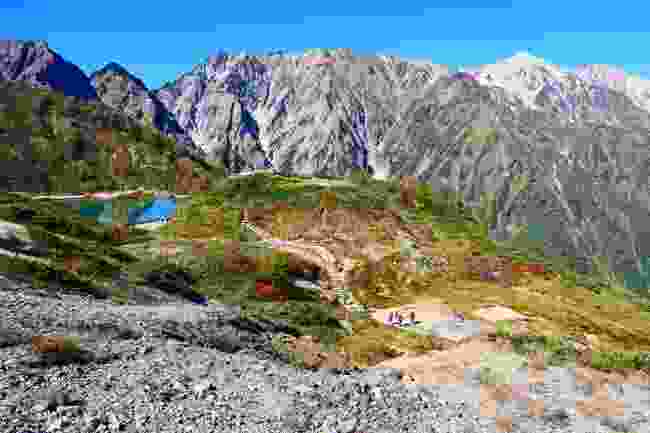 Get up in the Alps in Chubu (Shutterstock)

Chūbu is home to several thriving cities, from the big-business metropolis of Nagoya to artsy Matsumoto and historic Kanazawa. But it’s also one of Japan’s most enduring outdoor destinations, with the Japanese Alps dominating the region’s landscape and shaping its history and culture. Here are five of our favourite cultural experiences in the Chubu region...

1. The ninja sights of Iga and Kōka 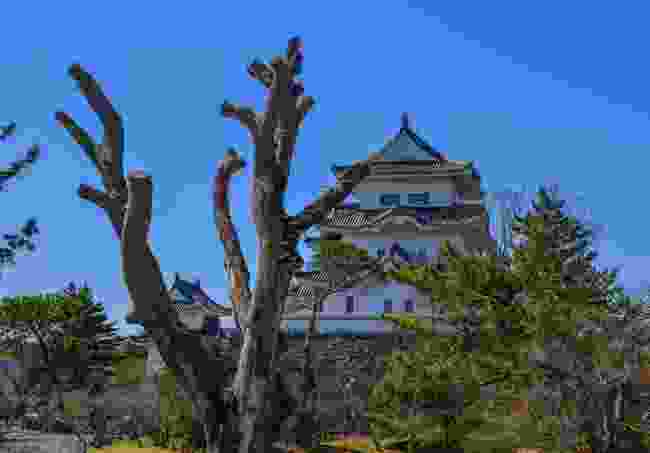 With its hidden valleys and secluded villages, Chūbu was a natural training ground for the secretive ninja. Two of the country’s most important ninja training schools were located here, in Iga and Kōka, and visitors can explore their legacy in museums, historic villages and preserved houses. The attractions range from family-friendly demonstrations and dress-up opportunities to detailed tours of ninja houses – complete with booby traps, hidden rooms and secret escape routes. 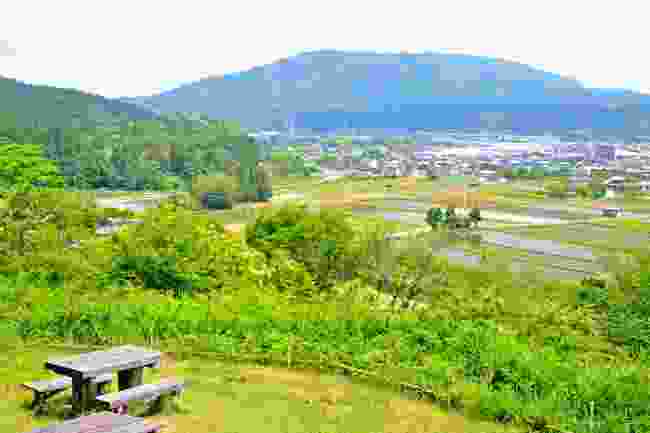 Just like Hastings or Gettysburg, Sekigahara is inextricably linked to the historic battle which took place there. It was pivotal, ushering in the end of Japan’s Warring States Period and the start of the 250-year-long Tokugawa Period. The plain where this bloody battle took place in 1600 is in Gifu, its main points marked with signs and memorials. Opened in 2020, the Sekigahara Battlefield Memorial Museum is the ideal place to learn more about Japan’s most famous samurai battle, and the warriors who defined the future of the nation. 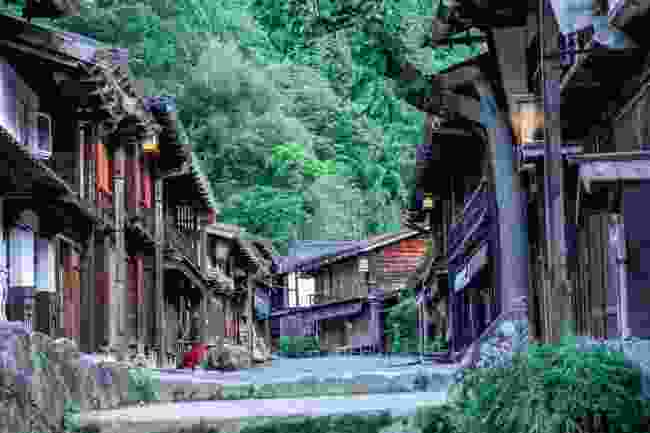 In the Tokugawa Period, the shōgun kept warlords in check by requiring them to live in the capital on alternating years. The Nakasendō was one of the main routes to Edo (now Tokyo), and is still dotted with atmospheric post towns today. Hikers can walk the same paths which samurai, princesses and merchants alike would have taken centuries ago. The Kiso Valley has some particularly picturesque sections – though after a few hours on the mountain paths, you’ll be glad you don’t need to do the whole route every year... 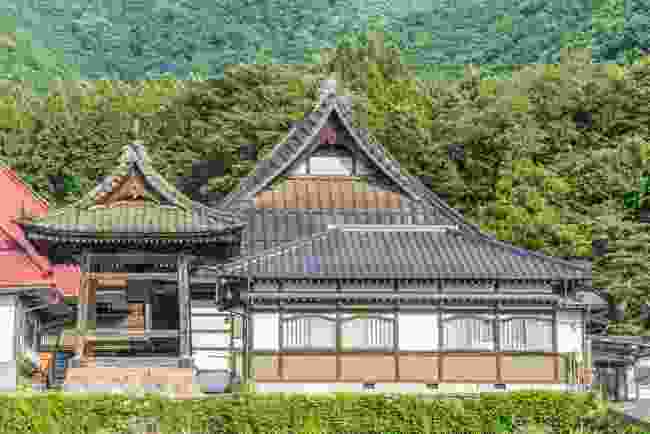 The picturesque town of Obuse (Shutterstock)

Near Nagano, Obuse is possibly Chūbu’s most attractive town. With its traditional buildings, well-kept gardens and historic sights, it’s a very pleasant place to spend a couple of days. Enticing you to stay longer are several spots associated with Hokusai – Japan’s most famous ukiyo-e artist, who settled here in his later years – and a local cuisine which includes delicious locally grown chestnuts and award-winning sake. 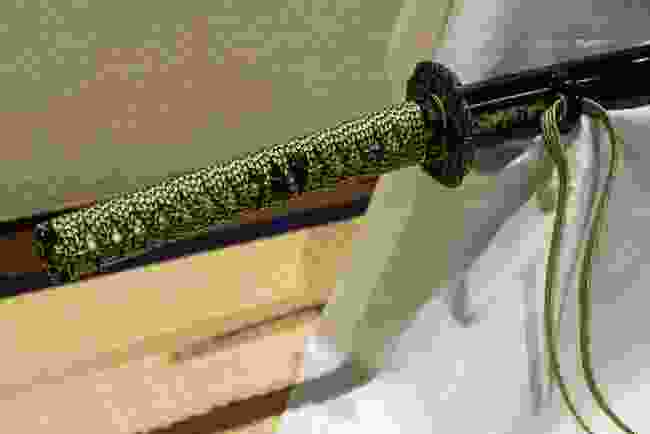 Though there are many regional crafts worth exploring in Chūbu, from paper-making to gold-leaf craft and indigo dyeing, swordsmithing is perhaps the most evocative. Today the artisans mostly produce kitchen knives and scissors, but they still make a small number of lethally sharp katana, the swords wielded by samurai for centuries. At the Seki Traditional Swordsmith Museum, you can see a 26th-generation bladesmith at work, and even try swinging the hammer yourself in the sweltering forge. His ancestors had already been making katana here for a century or two by the time of the Battle of Sekigahara, and that tradition continues to this day – a real example of living history.

The cultural journey doesn’t end there...