CULTURE GATE to JAPAN: discover the inspiration behind the exhibitions

With Japanese culture-inspired art exhibitions installed in New Chitose and Fukuoka airports, you can start exploring Japan's culture from the moment you land. Here's how to explore it even further...

In each exhibition, contemporary artists reinterpret local culture and crafts through a modern lens. At Hokkaidō’s New Chitose Airport, that means exploring the rich arts and history of the Ainu, an indigenous people native to Hokkaido, the Tohoku region of Japan and eastern Russia. The exhibitions in Fukuoka Airport, on northerly Kyūshū island, focus on the region’s rich crafts, many of them influenced by the area’s historic international links.

Read on to discover the culture and crafts of the regions of both Hokkaido and Fukuoka... 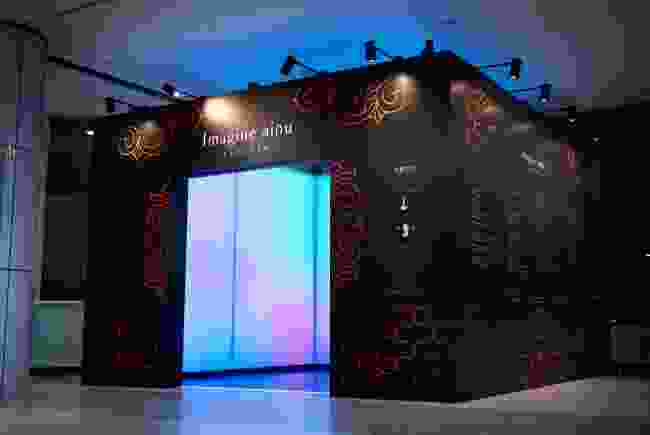 The multimedia exhibition exploring the Ainu culture from NAKED, INC. part of CULTURE GATE to JAPAN

New Chitose Airport is the gateway to Sapporo, capital of the northern island of Hokkaidō. The name of the city comes from the Ainu language, and means “dry, great river”. In fact, many place names in the prefecture have Ainu roots, and Hokkaidō was only incorporated into Japan in 1869.

The CULTURE GATE to JAPAN exhibition here, with the theme word INVISIBLE, takes inspiration from Hokkaidō’s centuries-old Ainu culture. From creative company NAKED, INC. the multimedia installation reflects the oral tradition of the Ainu by focusing on sound. Stories and spiritual traditions have been passed down as songs and dances, which are now recognised by UNESCO as Intangible Cultural Heritage.

Ainu culture isn’t a historical artefact, but something still living and changing in modern Hokkaidō. The exhibit is a great example of how the culture’s rich traditions can be viewed through a contemporary lens, and are still relevant and beautiful today.

Continue your cultural journey through Hokkaidō... 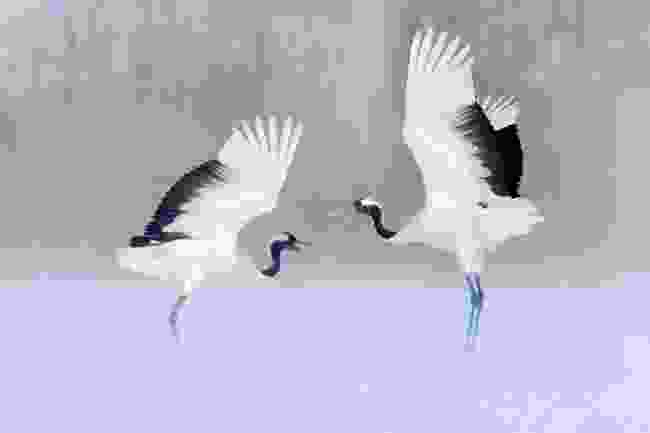 There are many places in Hokkaidō where you can learn more about Ainu culture. It’s well worth catching a performance of upopo or yukar epic poems, and trying your hand at crafts like weaving. But you should also make time to get out into Hokkaidō’s wild natural landscapes – lush and green in summer and covered in sparkling powder snow in winter – where the kamuy (spirits) often feel very close. Here are five places to soak up Hokkaidō’s culture... 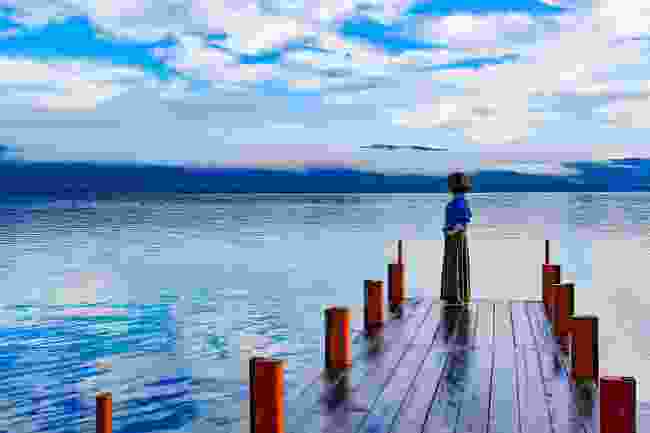 Soak up Ainu culture on the shore of Lake Akan (Shutterstock)

On the shores of Akan-ko, a crater lake in Eastern Hokkaidō, is Japan’s largest Ainu settlement. At the local theatre, you can see performances of the innovative Lost Kamuy, which combines traditional storytelling and dance with animation and contemporary dance to share Ainu beliefs about living in harmony with nature. This conviction underpins the Senbon Taimatsu Matsuri, a fire festival held each October to give thanks to the god of fire (Apehuci Kamuy). As part of the festival, marimo are returned to Lake Akan; it’s one of the only places in the world where this algae, which naturally forms into spheres, still exists in nature. 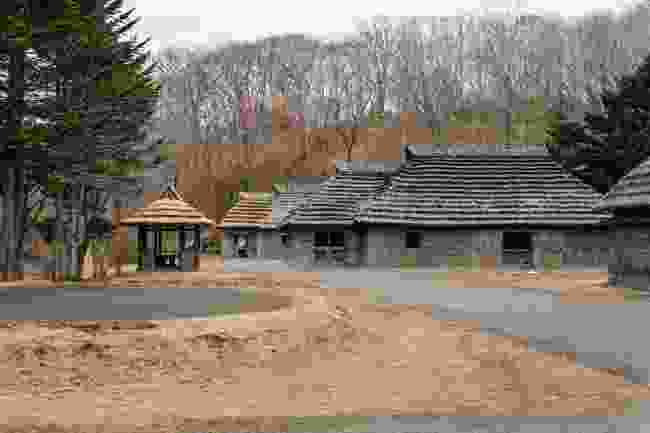 Opened in Shiraoi in 2020, Upopoy is the National Ainu Museum. The complex sits on the shore of serene Lake Poroto, and is made up of a mix of modern buildings and traditional Ainu houses. Alongside permanent and special exhibitions there are performances of traditional dances and songs, often accompanied on the mukkuri (mouth harp) or tonkori (a five-stringed instrument). You can try playing these instruments and tasting Ainu cuisine in the yayhanokkar cise (workshop), or making crafts like woodcarving and embroidery in the ikar usi (craft studio). 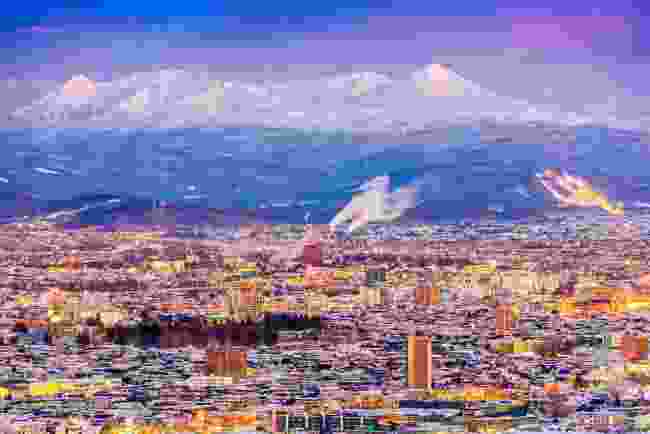 The modern city of Asahikawa may be best known for its warming ramen and freezing winters – the lowest recorded temperature is a bone-chilling -41°C – but it’s also a great place to learn more about Ainu culture. At the Ainu-owned Kawamura Kaneto Aynu Memorial Hall, exhibits explore the Ainu people’s traditional culture and modern lives in central Hokkaidō. Asahikawa City Museum also has a permanent exhibit focusing on Ainu crafts. Just west of the city is Kamuikotan (“village of the gods” in Ainu), which hosts the Kotan Festival each Autumn Equinox. 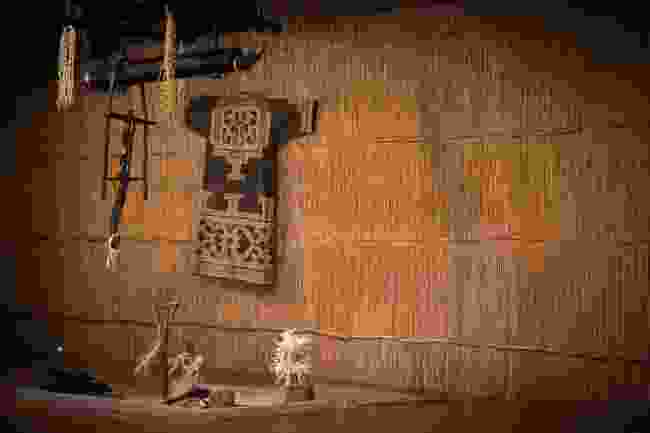 Discover the traditional textiles of the Ainu (Shutterstock)

The southern port city of Hakodate is home to the Museum of Northern Peoples, which has some of the oldest examples of Ainu textiles and other crafts. Traditional Ainu clothing features intricate embroidery, with symmetrical patterns that have very specific spiritual and practical meanings. Alongside the attush (elm bark) robes, the museum shows everything from elaborate jewellery to salmon-skin boots, and hunting equipment to homewares. 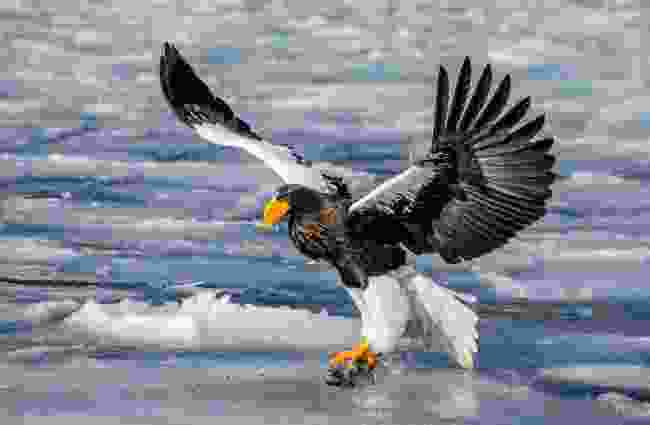 A wooded peninsula jutting out into the Sea of Okhotsk, Shiretoko is a pristine wilderness. With no access to the northern half by road, and drift ice crowding the shore each winter, it’s home to several species which are important kamuy to the Ainu people. Go at the right times and you’re likely to see the gods of the sea (repun kamuy, orcas), eagles (kapacchili kamuy, Steller’s sea eagles) and the mountains (kimun kamuy, brown bears). If you’re lucky, you might even glimpse the world’s largest owl, the Ainu god of the village (kotan kor kamuy, Blakiston’s fish owl). 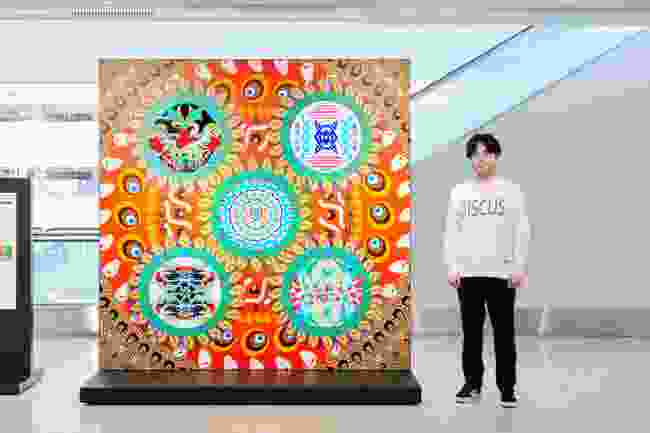 The southernmost of Japan’s four main islands, Kyūshu is known for its hot spring towns, beaches and diverse handicrafts. In Fukuoka Airport, visitors can explore this craft tradition through artworks created by MURAYAMA Macoto and MIZUE Mirai for CULTURE GATE to JAPAN.

In the Tokugawa period, Japan was almost entirely closed off to the outside world. There was limited trading with China and the Netherlands, mostly through the port of Dejima in Nagasaki, Kyūshū. Making use of this unusual link to the wider world, the region’s artisans incorporated European and Chinese methods into their crafts, and also created items specifically for export, leading to a craft culture unique within Japan. 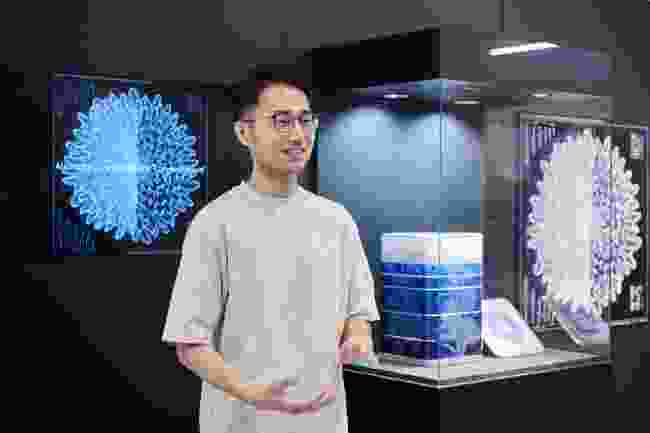 Through the theme of PATTERN, the two artists explore five different local crafts. MURAYAMA Macoto focuses on Arita-ware, taking inspiration from the porcelain’s intricate designs to create digital botanical drawings. A long-established Arita-ware producer, Fukusen-gama, has in turn painstakingly painted Maruyama’s designs onto porcelain. MIZUE Mirai has taken aspects of four crafts from throughout Kyūshū, combining them into a complex mandala-style animation.

Continue your cultural journey through Kyushu... 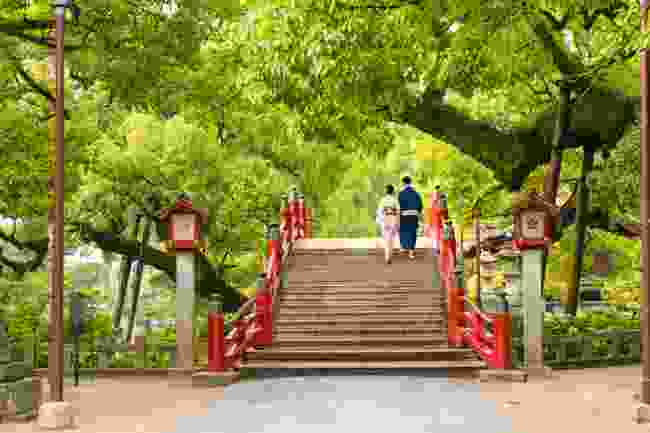 There’s so much to do in Kyushu: exploring dramatic natural landscapes like Takachiho gorge and volcanic Mount Aso; soaking in the hot spring waters of Beppu; eating your way around the yatai (food stalls) of Fukuoka. But just by seeking out the crafts represented at the CULTURE GATE to JAPAN exhibition, you’ll end up with a tour of some of some of the region’s most fascinating sights... 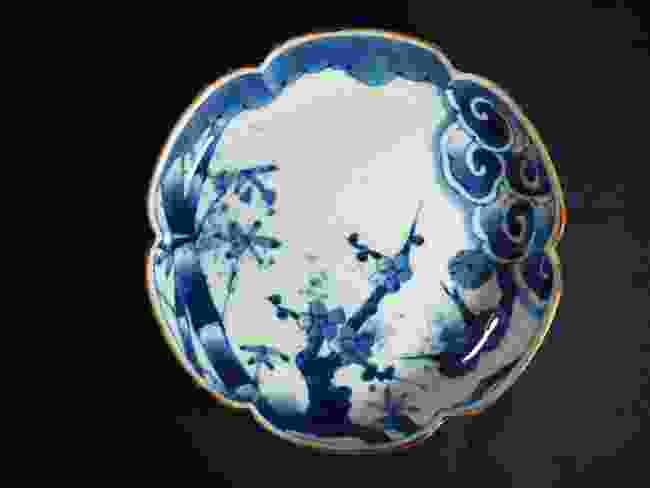 When kaolin was discovered in Saga prefecture in the seventeenth century, Arita began producing fine white porcelain decorated with delicate, vibrant designs. Most of the pieces were intended for export, but various styles developed over the centuries, to suit all tastes. Nabeshima-yaki, made for the rulers of Japan, is still produced in the idyllic village of Okawachiyama, one valley away from Arita. Each May, the town of Arita holds a huge ceramic fair, a great opportunity to pick up some pieces. 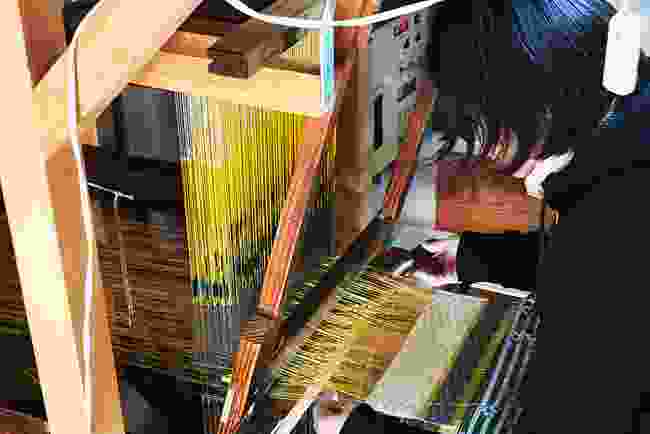 See Hakata-ori textiles being made

Fukuoka, the largest city in Kyushu, is the home of elegant Hakata-ori textiles. This fabric has been produced in the city’s Hakata district for almost 800 years, created by combining Japanese silk production methods with those introduced from China. The woven patterns are usually simple and geometric, following the line of the long strip of fabric. This makes Hakata-ori textiles perfect for obi (kimono belts), but nowadays it’s also used for everything from ties to bags. 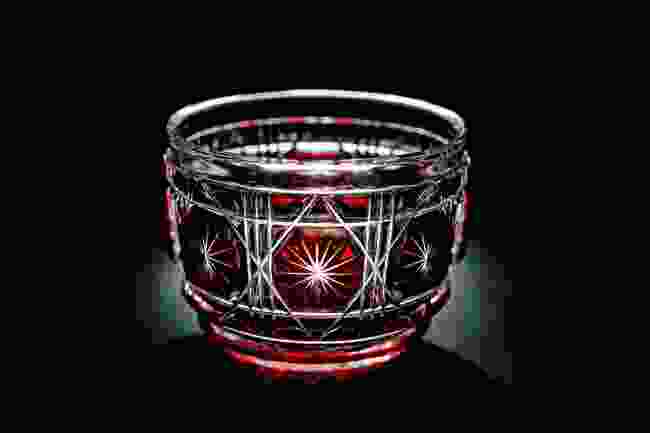 Delicate, brightly coloured Satsuma-kiriko originates in Kagoshima prefecture in southwestern Kyushu. This distinctive cut glass craft was developed in the nineteenth century when local artisans combined Japanese glassmaking methods with techniques from China, the Netherlands and the UK. The secrets of Satsuma-kiriko were almost lost in the twentieth century, before the craft was revived in the 1980s, and thankfully today there are several workshops where visitors can see the complex process of making this intricate glassware. 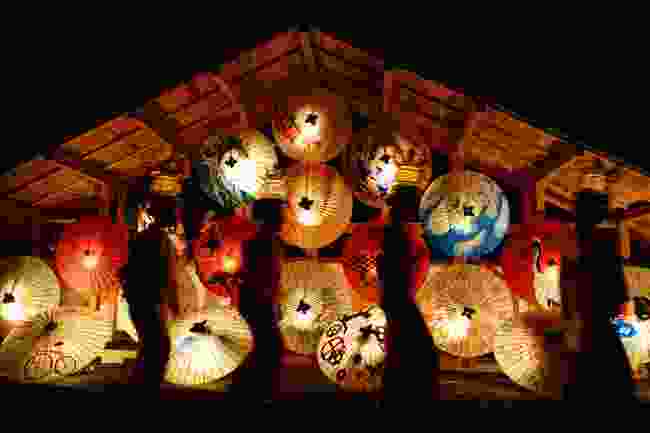 See the Yamaga lantersn at the summer festival (Shutterstock)

Sleepy Yamaga, in central Kyūshū’s Kumamoto prefecture, is famous for its intricate lanterns. Remarkably, they’re made entirely out of washi (Japanese paper) and glue, making them light but durable. You can see examples in the Yamaga Lantern Folk Art Museum, but the best way to see them is at the Yamaga Toro Matsuri. In this summer festival, held each August, hundreds of kimono-clad women perform a traditional dance in the evening, wearing the delicate lanterns as softly glowing headdresses 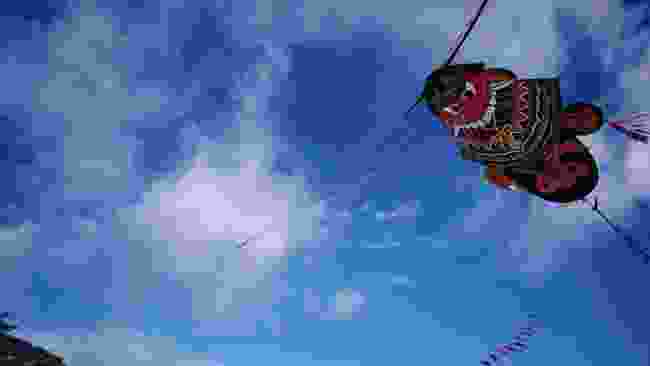 The Gotō archipelago, 100km west of Nagasaki city, is known for its sandy beaches and UNESCO-listed ‘hidden Christian’ sites. When Christianity was outlawed in the sixteenth century, adherents fled to these remote islands, where the communities survived in secret for centuries. The archipelago’s unique culture has also produced crafts specific to the islands, including Baramon kites. You’ll often see these colourful paper kites, painted with warriors and demons, flying to celebrate Children’s Day in May.

The cultural journey doesn’t end there...