From hiking, biking and helicopter rides to rustic food and drink classes, these experiences show you five unique ways to get to know Catalonia’s rich, diverse wine culture

With a variety of different climates, from the breezy coast to warm inland regions, Catalonia is an ideal part of the world for producing a large variety of wine. This corner of Spain is home to 12 wine regions, or DOs (Denominació d'Origens), each of which with their own distinct flavours making their way from grape to glass.

Among the most notorious wine regions on this scene are: Priorat, a hilly area near Barcelona that typically produces rich, dark reds; Terra Alta, a western strict that makes fresh reds at the highest altitude in Catalonia; and Penedès, which, among other blends, generates a large amount of Catalonia’s cava.

There are many fun ways to explore Catalonia’s wines. These five connect you with some of the province’s most innovative and pioneering vineyards, and the delicious fruits of their labour. Locally known as the Camins del Vi, the wine trails in Priorat, a region in south-west Catalonia, are the place you go if you like getting around on your own two feet. The paths are based on ancient byways that used to connect the area’s villages before the major roads were constructed, so not only will you walk through beautiful scenery and pass numerous vineyards, you’ll learn a little history on the way too.

A common place to start your amble is Falset, a town that hosts a wine festival in Spring each year and is considered the epicentre of wine culture in Priorat. Walk the Camins del Vi from here 8.5 kilometres to the village of Gratallops. On the way, you can make stop-offs at the vineyards at Mas Martinet, Alvaro Palacios, and finish at Clos Figueras at Gratallops.

The route usually takes about two and a half hours but that doesn’t include wine stops, so add a couple of hours on and take it at a leisurely pace. Alternatively, extend the route to Bellmunt del Priorat for a more challenging walk of 18.5km, usually spread out over two days.

2: Discover the DO Empordà wine route in Costa Brava 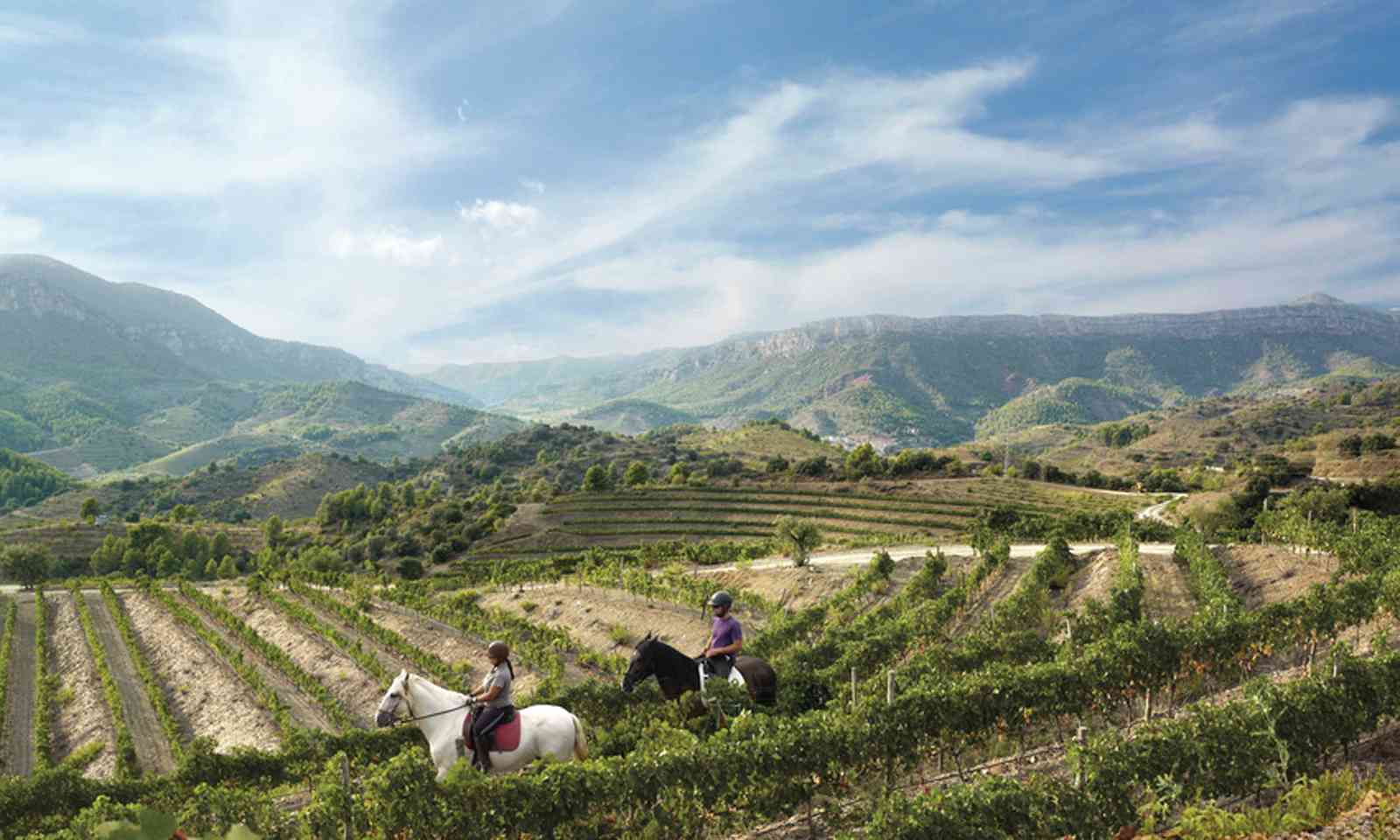 The Costa Brava’s Alt Empordà region is situated north of Girona, tucked right up against the French border. The DO Empordà wine route encompasses 29 of the area’s wineries, from those tucked away in the Pyrenees to vineyards on the coastline. Due to this geographical spread, from sea level to 260 metres above it, this region hosts a large variety of grapes, producing anything from full-flavoured reds to crisp whites and sweet moscatel.

The collective was brought together to promote wine tourism in the area, and alongside wine tastings you can experience the region through bike tours, kayaking, festivals, and more, catering for every bouquet of wine traveller.

You can also pair your wine experiences with gastronomy at 11 participating restaurants where you can sample the food traditions of the region that have been kept alive by expert chefs. For the full experience, also stop by one of the route’s two wine therapy centres, where you can have a wine massage or scrub to benefit from the grape’s antioxidant properties. 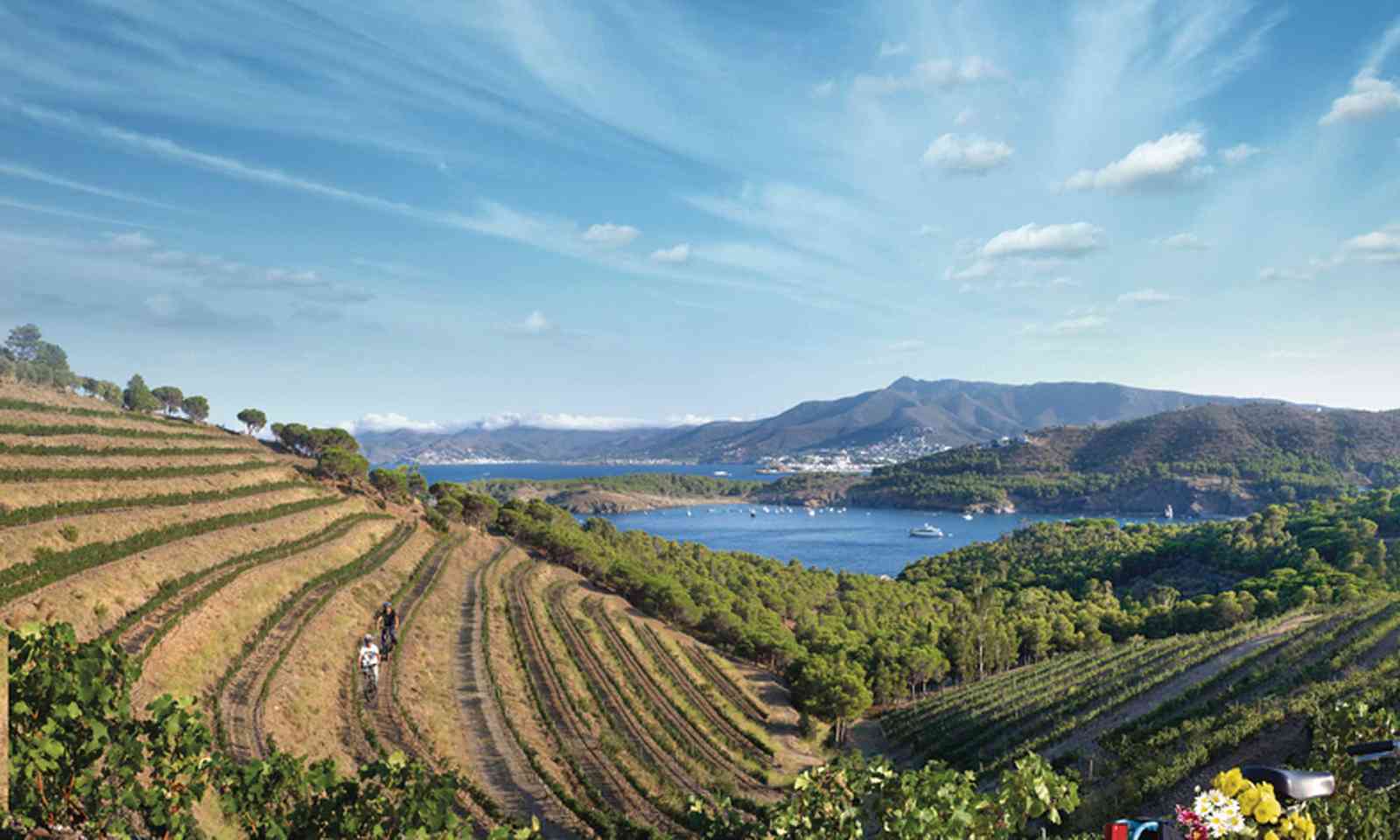 Located 20km from Barcelona on the fringes of Serralada de Marina Natural Park, Alta Alella is one of the closest vineyards to the Catalan capital, so one of the most accessible in the region. It’s thought that wine has been made on and around this property since the Roman times, and today it’s family-run and specialises in organic wines. The vines on its south facing slopes produce red wines, and the north-facing slopes are used for cava and white wines.

Alta Alella’s proximity to Barcelona allows for a fun day out from the city centre. You could simply hop on a train to El Masnou, just a few kilometres away from the winery, but for something a bit more adventurous join an E-bike tour. These take you up the coast and to the vineyard. As the bike helps you along, especially on the hills, it’s an easy-going ride, taking about an hour a half one-way.

If you’re looking for an even more exciting way to visit, book yourself on a helicopter tour. These take off from a helipad in Barcelona and take you over the coastline to give you a bird’s-eye view of the vineyard and the surrounding area. Once you touch down at the winery, you’ll be taken on a 4x4 excursion followed by pica-pica (small dishes of food) on the terrace with a sampling on their wares.

4: Stay on a vineyard in Penedès, Costa Barcelona 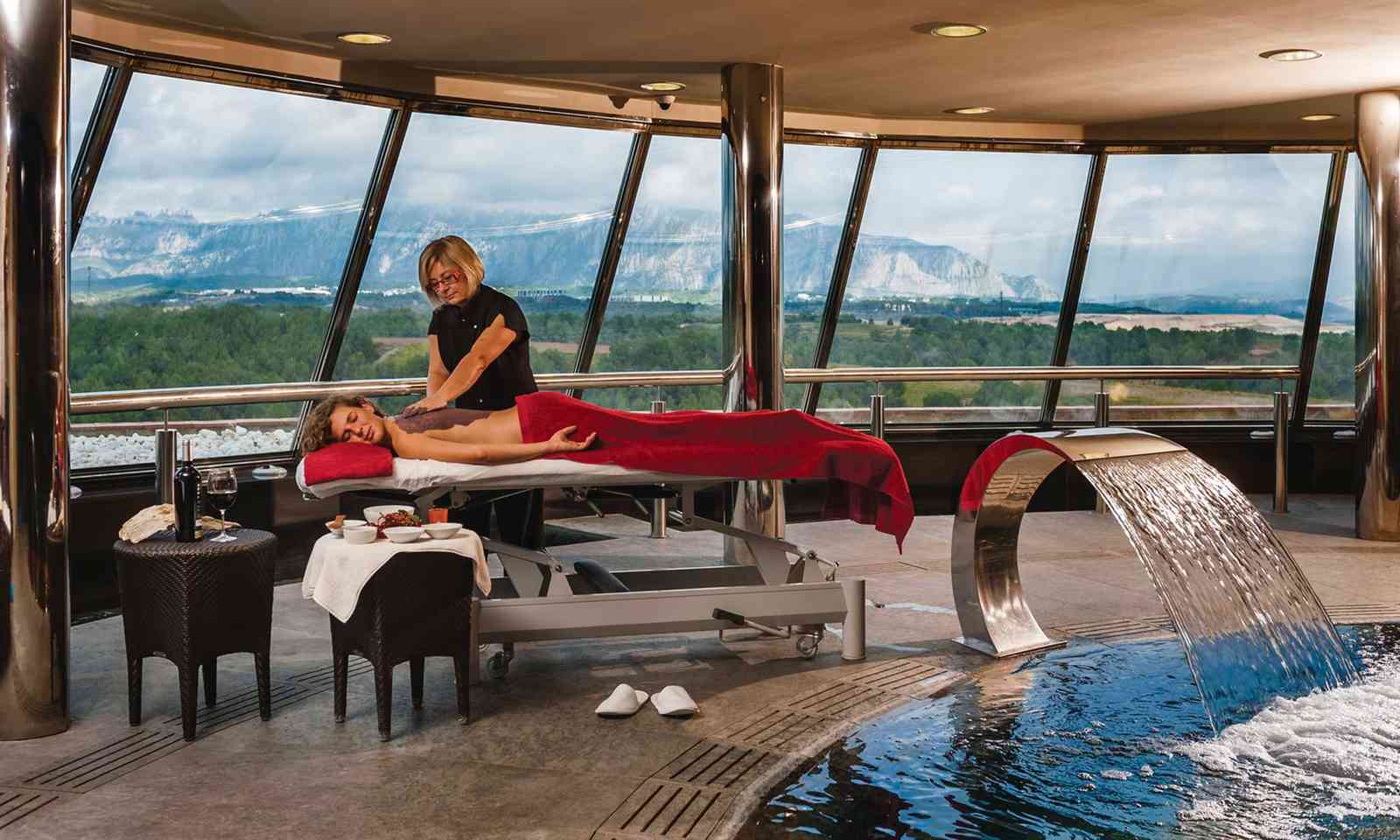 Can Bonastre (Catalan Tourist Board)

With wine tourism growing so much in the last few years, wine hotels have cropped up all over Catalonia. These types of accommodation make for the perfect wine break, and often include sweeping views of the vines right from your bedroom.

Can Bonastre is one of the most luxurious wine stays in Catalonia, located in the Penedès wine district, around 50km northwest of Barcelona. Here you can sit back and enjoy stunning views of the Montserrat mountains, while sipping on a glass of the winery’s selection of reds and whites and picking at Iberian ham and artisan cheeses. With your room never too far away, this makes for a seriously relaxing stay.

For something a little more cosy and rustic, try B&B Wine and Cooking, slightly further south. Also based directly on a vineyard, this hotel is in a 400-year-old masia (a Catalan word meaning country house) with just three rooms available to guests. As the name suggests, here you can take a guided tour through the property’s vines to learn about their wine and cava production, and learn how to cook Spanish and Catalan dishes (while also tasting the wine, of course). 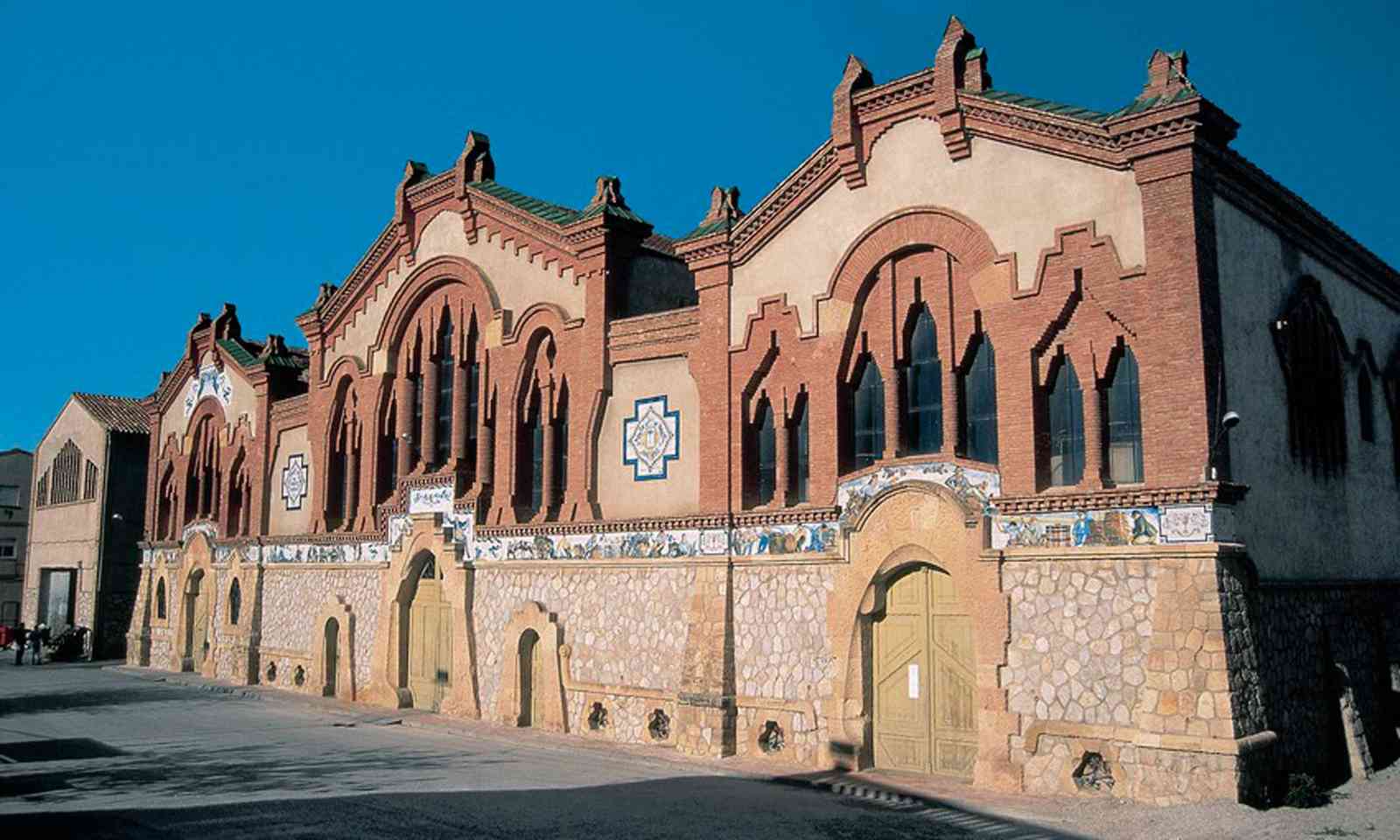 Born out of the phylloxera plague (a crisis in the 19th century whereby the phylloxera insect killed vines across Europe), the ‘wine cathedrals’ of Terra Alta in south-western Catalonia are spectacular structures. After the devastation the pest caused, co-operatives were built between the farmers and land owners and to send a message of strength and recovery, beautiful buildings – temples of wine – were created to kick production back into gear.

The movement was powered by Cèsar Martinell, an architect who learnt how to make wine then combined these two passions. Among his finest works are the Gandesa and Pinell de Brai wineries, two masterpieces filled with archways and church-like touches, located just a few kilometres apart in the Terra Alta.

Take a tour of the wineries to learn more about their beginnings and construction, followed by a tasting of their wines. There are also shops here where you can pick up bottles to take home, plus you’ll want to sample the olive oil, another product for which these remarkable properties are famous.