Watch your step: The world’s 9 most breathtaking staircases

From ancient carved stone staircases in Sri Lanka to modernist marvels in the Vatican, these staircases are both beautiful and challenging – and breathtaking in every sense of the word 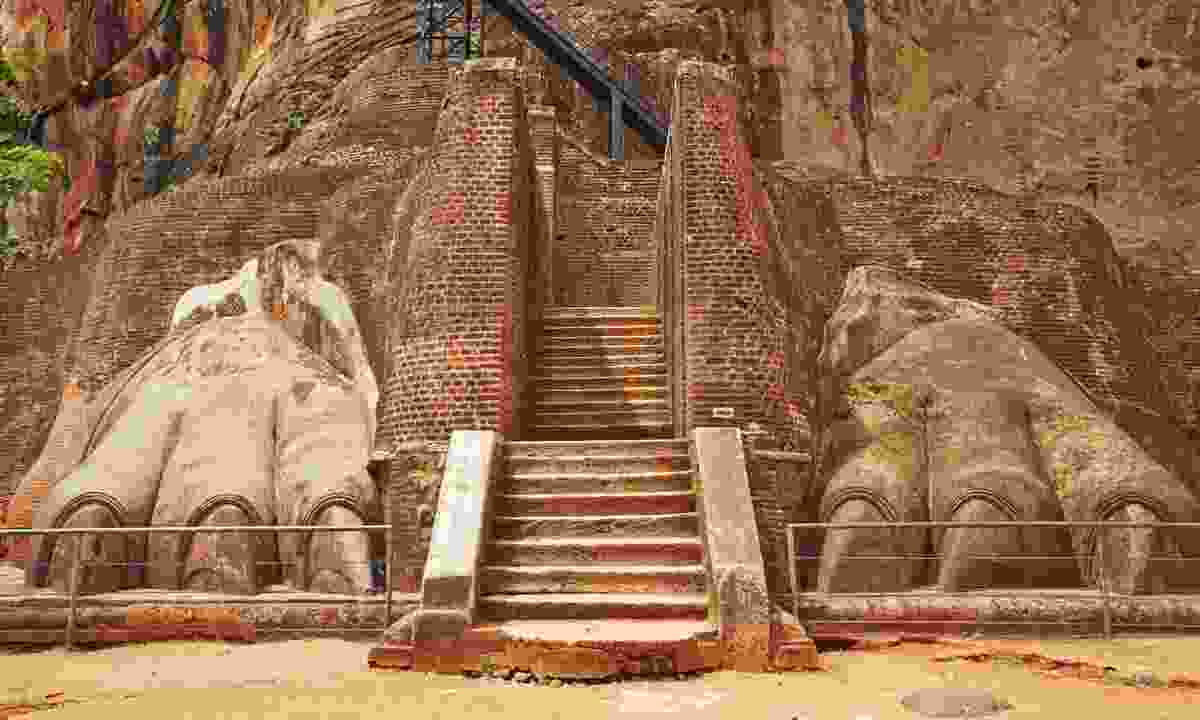 Lion's paws mark the start of the final ascent (Dreamstime)

Sigiria is an ancient rock fortress near Dambulla in Sri Lanka. It sits atop a rock nearly 200 metres high and is reached by climbing 1,200 steps. Halfway up the rock, on a small plateau two giant lion’s paws mark the start of the final ascent. Ancient frescoes adorn the rock walls and the view from the top is spectacular. 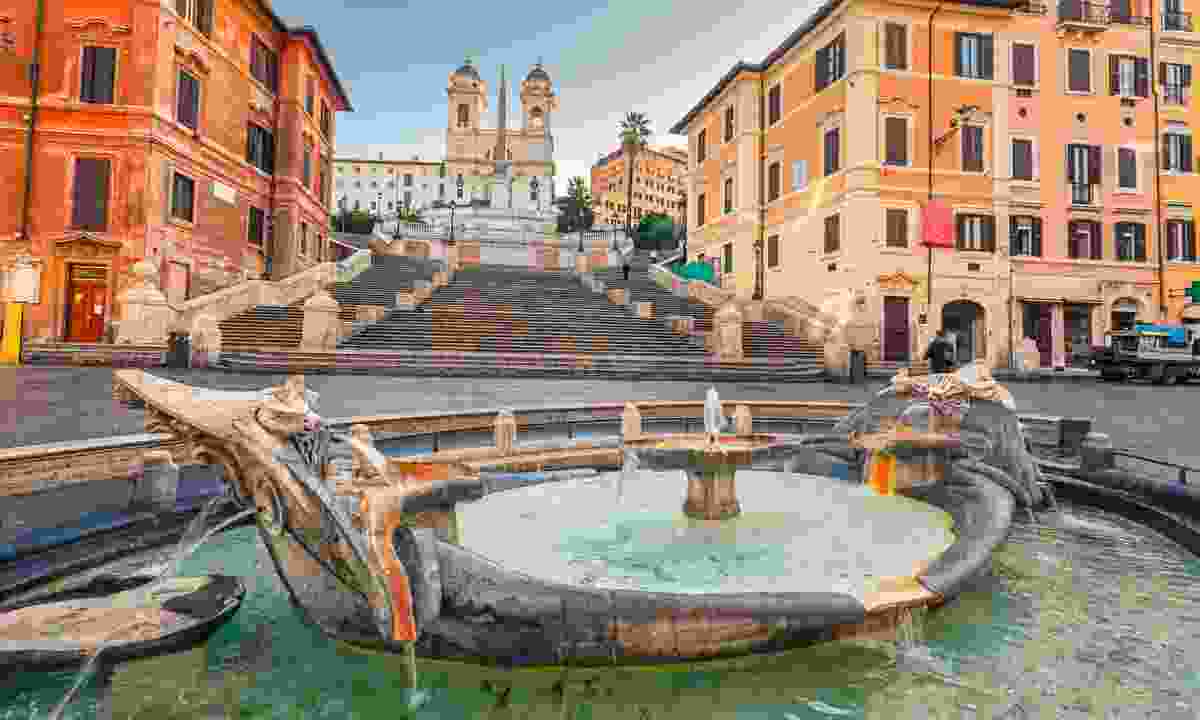 One of the most beautiful staircases in the world, the Spanish Steps were built up a steep hill to link the Trinità dei Monti church in Piazza Trinità dei Mont with the Piazza di Spagna below. Although it only consists of 135 steps, the elegant staircase has featured in countless movies, including the 1953 classic, Roman Holiday. Sitting on the steps to eat gelato has become something of a rite of passage for any visitor to Rome. 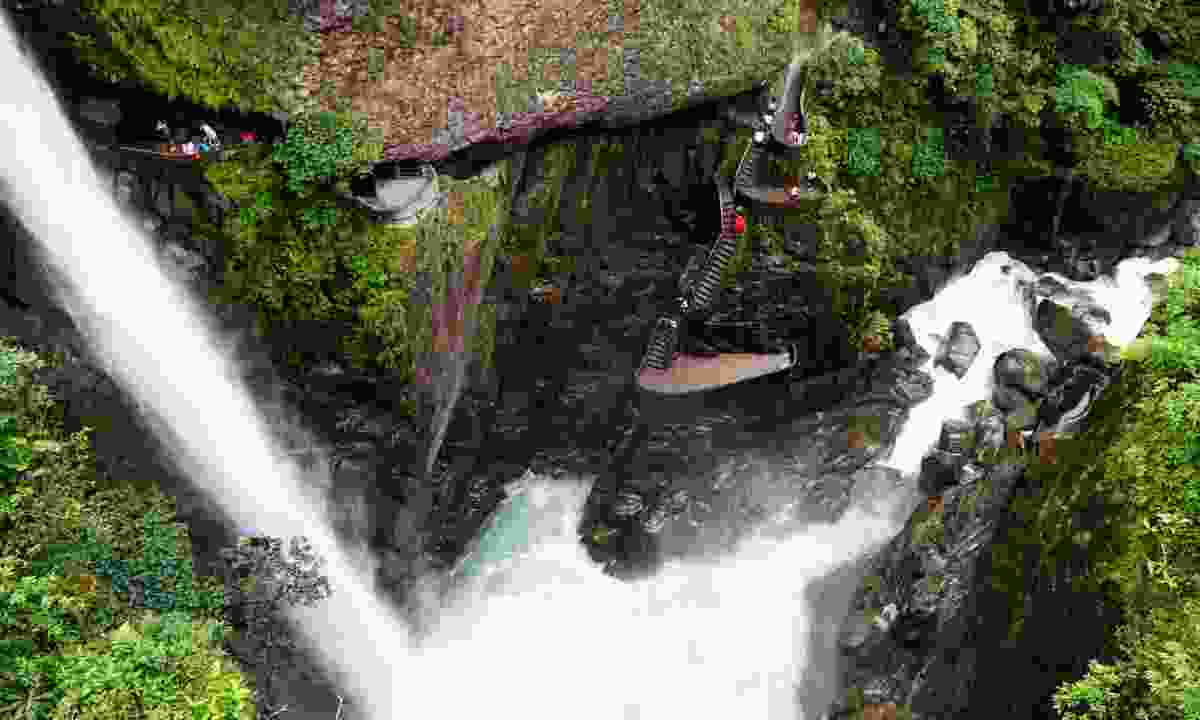 Only 80 metres in height, the Canyon Staircase in Ecuador is arguably one of the most spectacular in the world, winding its way down beside the mighty Paílón del Diablo (Devil’s Cauldron) waterfall. When it has been raining and the Pastaza River is running at full force, it is one hell of an experience. 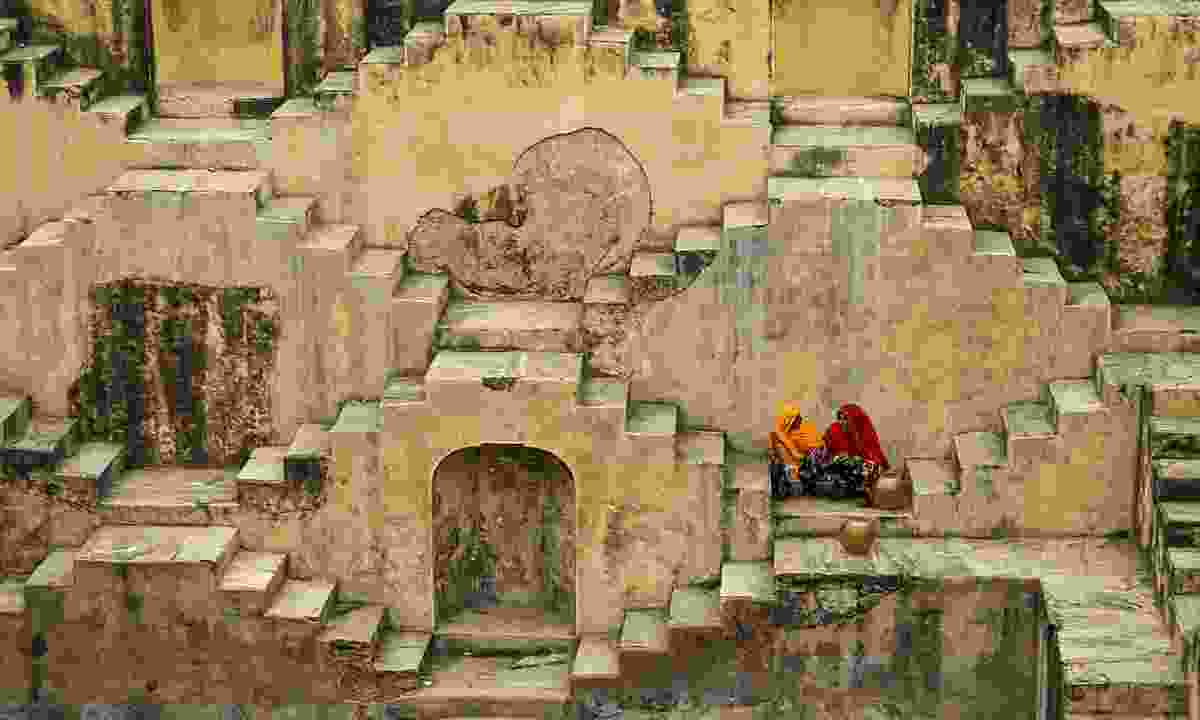 Local standing in the stepwells of Chand Baor (Dreamstime)

Both a staircase and a well, Chand Baori is a geometric wonder and one of the strangest sights on the planet. Built in the 9th century in the tiny Rjasthani village of Abhaneri, it features over 3,500 steps, descending 16 storeys, making it the largest and deepest step well in India. 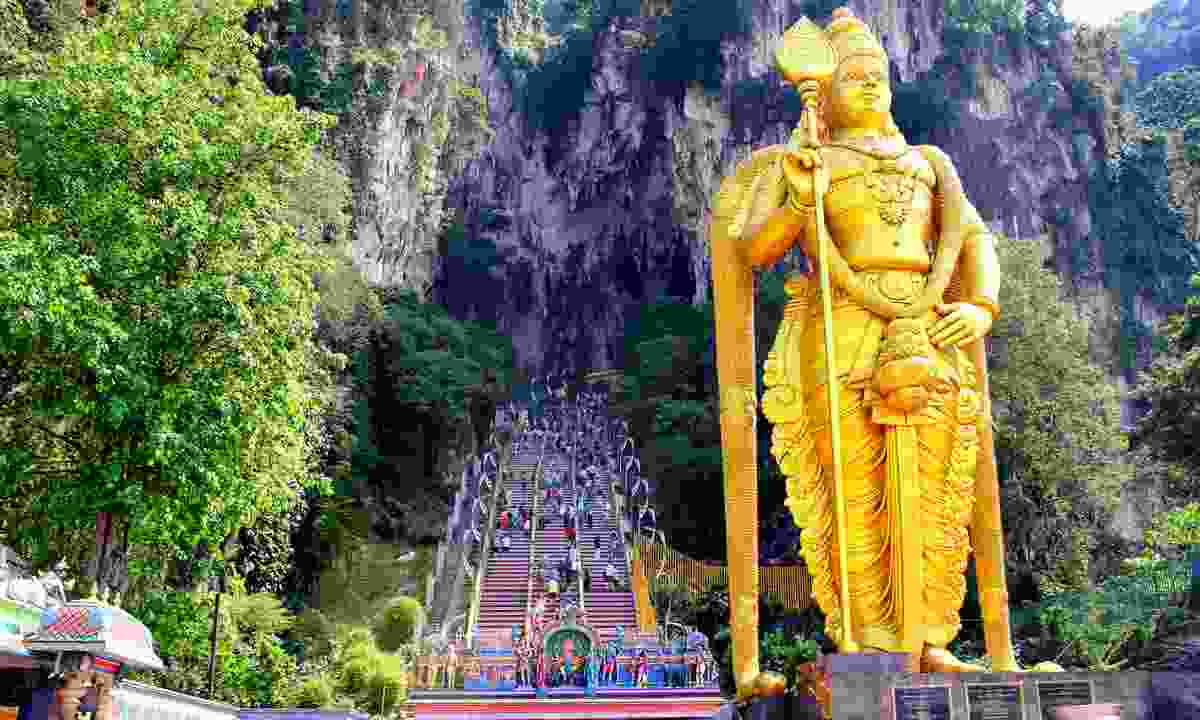 The 272 steps at the Batu Caves, near Kuala Lumpur in Malaysia, lead to the most popular Hindu shrine outside of India. Dedicated to Lord Murugan, a Hindu deity, it is set across three limestone caverns – Temple Cave, Dark Cave and the Art Gallery Cave. The most striking thing about the staircase, however, is its guardian: a 140 foot statue of Murugan, covered in 66 gallons of gold paint. 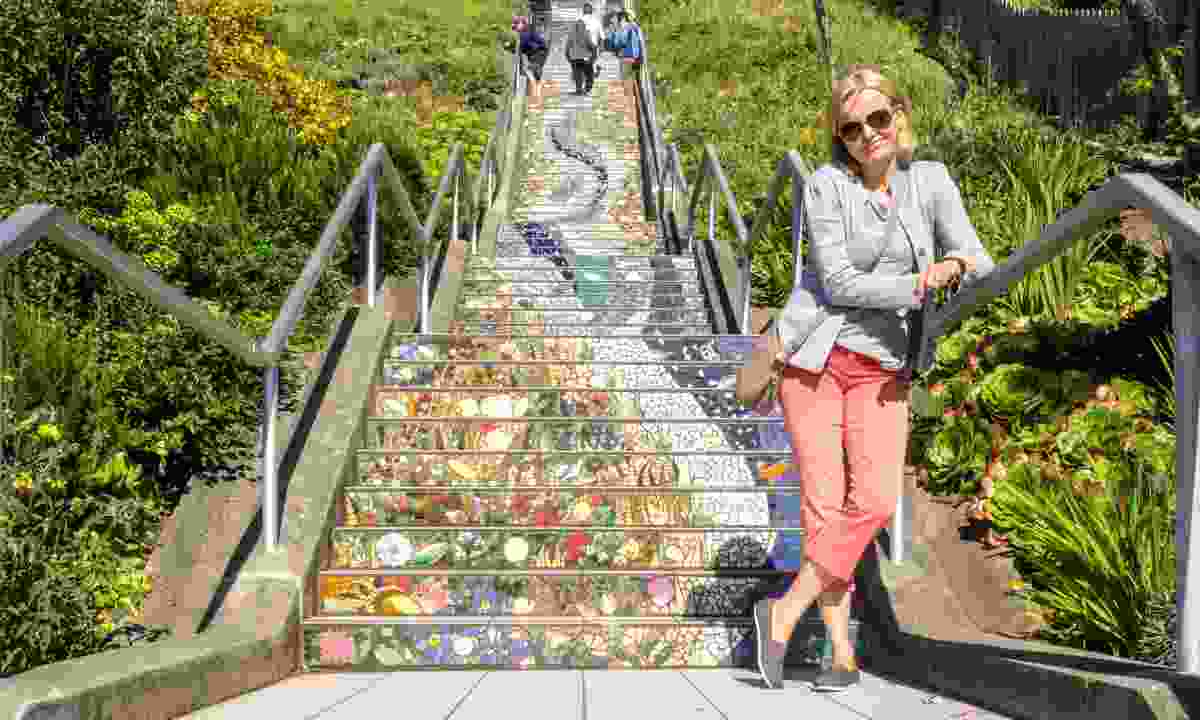 The tiled staircase located on Moraga Street between 15th and 16th Ave was drab and unremarkable when it was first built. But a community project led by Irish ceramicist Aileen Barr and San Francisco mosaic artist Colette Crutche transformed it into the largest mosaic staircase in the world. The 163 steps contain 2,000 handmade tiles, with 75,000 tile, mirror, and stained glass fragments forming a sea-to-stars themed mosaic. Set in quite a wealthy residential area, tourists are asked to visit between 9am and 7pm. 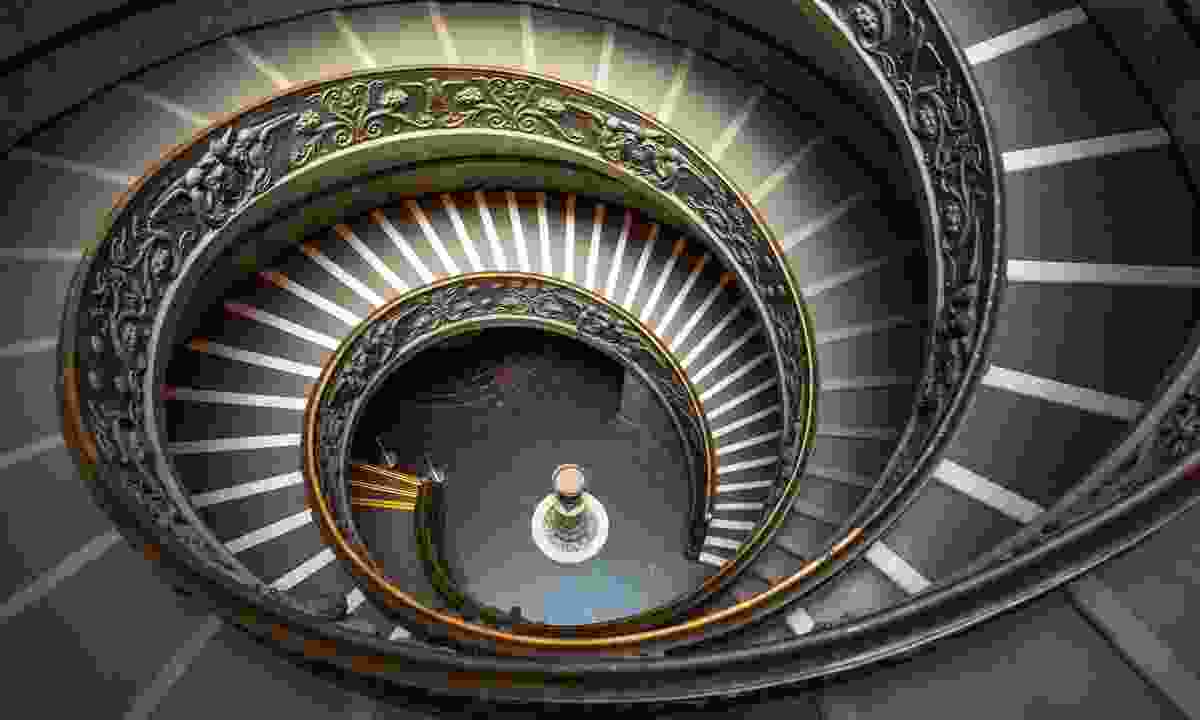 Stunning and practical, the Momo Staircase in the Vatican uses an ingenious double helix design to facilitate the smooth flow of people in the busy Vatican museums. One wrought iron stairway goes up, another goes down, twisting to ensure uninterrupted traffic in both directions. Designed by Italian architect Giuseppe Simonetti in 1932, it has become one of the most photographed staircases in the world. 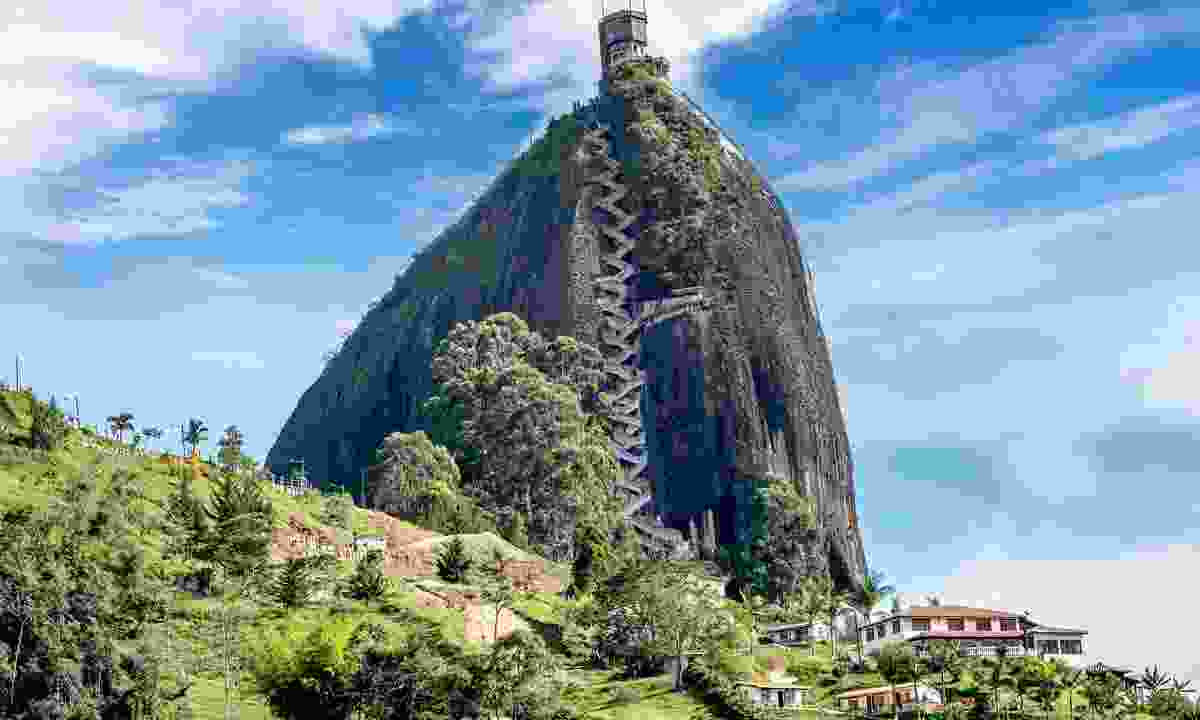 El Peñol, the Rock of Guatapé, is a 200 metre monolith that was once worshipped by Tahami Indians. It is topped by a three-storey viewing tower and convenience store, reached by climbing the 740 steps that make up the surreal staircase built into the side of the rock. There is a shrine to the Virgin Mary halfway up if you find you need divine intervention to continue. 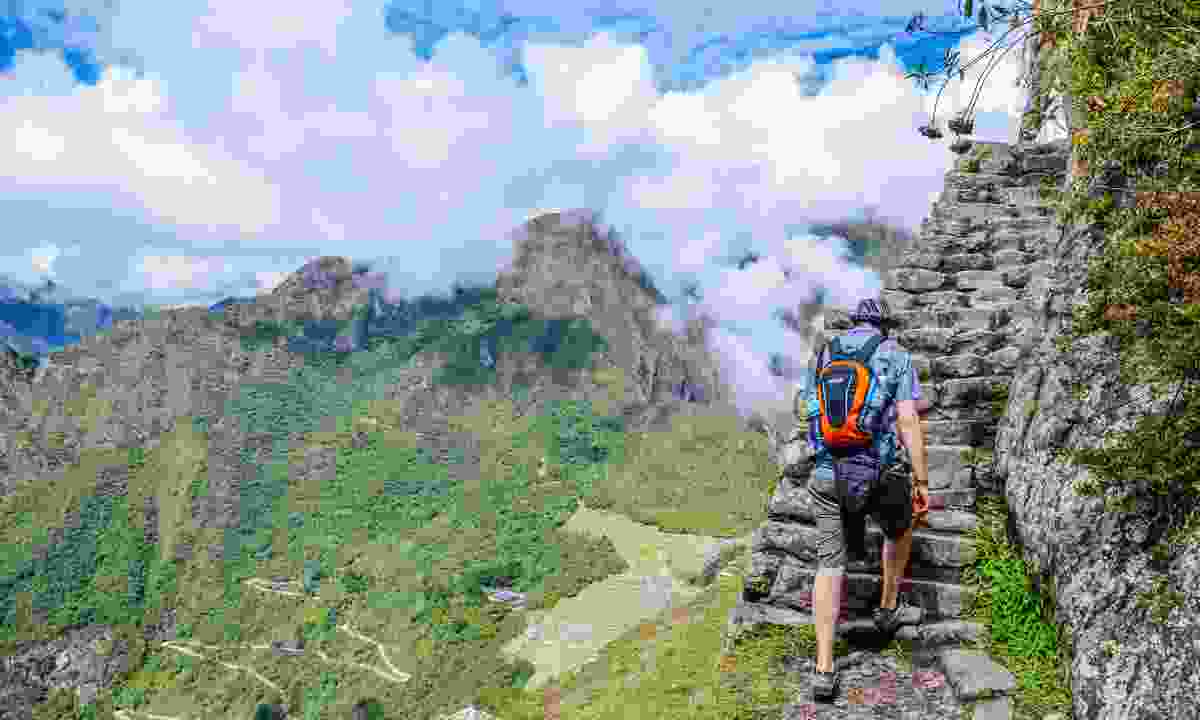 Heading up the Inca Steps (Dreamstime)

Each morning 400 hardy souls climb over 100 flights of stairs made up of over 3,000 steps, carved into the side of Huayna Picchu to reach the Moon Temple and its spectacular views over the Machu Picchu ruins. The steps are slippery and treacherous, with added chains to hold in the worst parts where there is a sheer drop to the Urubamba River below. The view, of course, is worth it. But at 2,400 metres above sea level, the altitude is guaranteed to take your breath away.