Why every child should ride the rails in India

Melanie Gow discovers that the lessons learned by travelling by rail in India are even more intense – and fundamental – for children.

Outside the window an unimaginable vastness slid past, soundless but for the old-fashioned clickety clack of a train steadfast on its tracks, white noise for the thoughts of what lives lived in acres of red dirt beaten by heat and wind were like.

We were between Jaipur and Mumbai, several hours into the heart of Madhya Pradesh, a state that is home to a large tribal population largely cut off from development. We passed patches of trees bent low and stripped naked, cowed by the conditions, interspersed by low piles of layered cowpats, alongside equally lowly homes.

The train banked with a lopsided tilt, and I saw a young woman was turning over cowpats spread out on the ground, I supposed to dry the underside for a natural fuel. I had time to notice the drape of her terracotta sari falling as she bent, the cracks in the heels of her feet, the hair framing her face beginning to turn a wiry grey.

She looked up as the train passed, and I thought our eyes met. She had a round, deep copper face, the face of a woman who labors ceaselessly on the land; and it wore, for the second in which I saw it, the most desolate and self-sufficient expression I have ever seen.

There was a child in her peripheral vision of five, maybe less, picking up the already dried pats at the edge, and starting a new pile. The sound of my son’s voice brought me back into the carriage, “Santa doesn’t comes here, does he mum?”

Far from losing his childhood innocence, his world went from the black and white of certainty to the brilliant Technicolor of empathy.

He began to look for those differences and ask the questions, and then see the familiar with new eyes again. 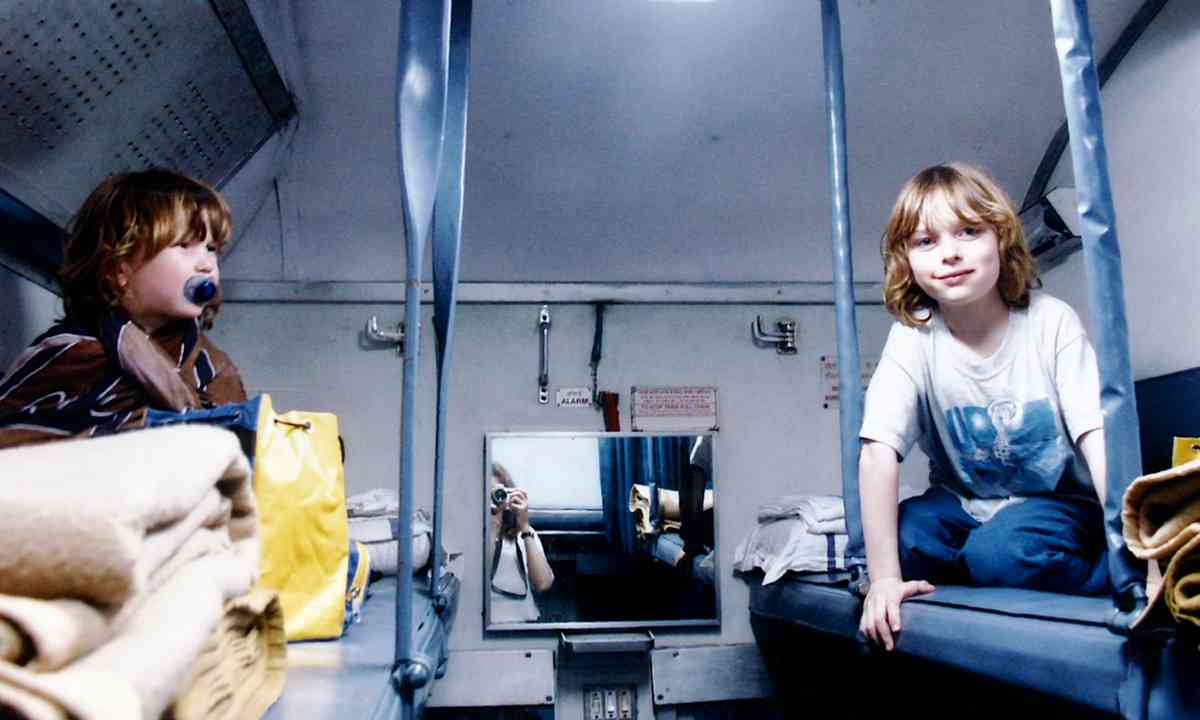 With its visceral collision of the modern world and a chaos of pasts, it is almost as if time itself has folded and thrust India’s plodding, remorseless distant histories into its own future unscathed.

The train embodied a connection between places; not just in distance, but also worlds. And the ride jostled and thrust our values and beliefs into our faces, and tickled reality.

Over 96 hours criss-crossing down India through five cities, from the Brahma Mandir temple in Rajasthan to the houseboats on the Malabar Coast, the contrast between the familiar and the exceptional passed the windows in a rolling diorama; The bullock cart with wooden wheels and over laden with green sugar cane, drawn up beside a modern sports car at a barrier crossing. Reams of purple, dyed cotton being laid out to dry by a man in his langota loincloth alongside the advertising hoardings for the virtues of underwear. The rusty patchwork of corrugated-iron sheet roofs a siege around ornate cream minarets and domes from other civilizations.

Every station was an instant market; the local delicacies haggled with new shoes and second-hand books for a transaction out of the windows. The corridors filled with water boys and the tea wallah scurrying down the aisles singing "Chai, chai, garam chai."

This sweetened, spicy, creamy tea is a part of life all over the country, but every region and every vendor had their own version. At every station, no matter what time of day or night, the chai wallah sang his clarion call, and dashed down the aisle in an exchange of glasses and coins, and steaming sips. Before racing back to collect up “the dirties”, and jumping off as the train pulled out of the station.

Every cup was a flavour of where we were, but the most memorable one came during the 26-hour ride from Mumbai to Kerala. The tea was served in low-fired clay cups, 'mutka', and the earthy tang grounded it in the soil of the region. But we got to sip it slowly as we didn’t need to give the cups back and, with a glee normally forbidden by littering, we just threw them out of the window when we finished, to return to the earth over time.

The joy and simplicity of having time to appreciate the simple act of drinking tea stood out in the heady mix of frenzy and boredom. But also there’s a tangible feeling of connection to the lives of those who made those cups as your hands slip over the impressions left in the clay by the fingers that shaped them. The lack of clutter and waste, the renewable, biodegradable, cheap resource made a lasting impression on my sons, and still informs their purchasing choices.

At every stop a little bit of the local culture got on and said hello. Those who ride trains care less about where they're going than the journey itself, and the people they meet along the way. We bought an IndRail pass and travelled AC2 class; in a four berth with fold-down bunk beds and bedding brought in the evening by the conductor. All seats and berths are reserved and it’s a safe, civilised, cheap and comfortable enough way to get around India.

Entire families moved onto the benches and made camp; unpacking bedding, and picnics, and hanging pink makeshift curtains. Most passengers speak English, and the children had no problem with the apparent frankness of the questions they got asked.

In fact the curiosity my two boys attracted gave them an independent experience through conversations. When we had a question there was always someone to explain the culture. We heard stories from the cantankerous, arthritic banker, and his pregnant wife, the fat auntie in a lime green sari on her way to Calcutta, with her Post Office clerk husband, and their eight children and nephews and nieces. We made toys out of napkins, and shared naan in the middle of the night.

For young kids any long journey can be tough, on everyone, but the train allows you to move around, interact, sleep, play and get where you are going as part of the experience.

Without doubt the train was the best way to see as much of India, independently, in a school holiday with young children, mine were aged four-and-a-half and seven.

A big train ride across India is on the list of trips you must take in your lifetime, it is an experience not to miss as well as being a way to taste the diversity of the life across the country. We arrived in Delhi and plunged straight into the narrow gullies of Chandni Chowk market in dilapidated Mughal Old Delhi. Lanes and by-lanes of a thousand foods, and firecrackers, and orange and scarlet silks and Chikan embroidered shirts. We ate fresh yellow omelet from an open air cafe late at night at the edge of Nehru Park, rode green tuk tuks everywhere and left from the Red Fort style Old Delhi Station to Ajmer.

We spent several days in Pushkar, wandering between the black cows in the streets, watching snake charmers, and making “Pushkar Puja”. In the most sophisticated hustle, a temple priest recites Hindu prayers and blesses you, while you tossed rose petals and rice into the lake to feed the fishes, and money into the collecting plate.

We took a camel ride out into the amber Rajasthani hills and played on the edge of an oasis, before returning to watch the sunset on the steps of one of the 52 sacred white ghats. An orthodox Jew played violin, as we ate popcorn from a rolled newspaper cone.

We went from getting bombed, exuberantly, by clouds of vivid rainbow coloured ink powders on the streets of Jaipur in the Hindu Holi Festival of Colour, to hunting Easter eggs in the jade green sunken gardens at the side of reflecting pool of the Taj Mahal in Agra. To seeing Bengal tigers ten feet away lying on a rock eating a langur monkey in the sun, from the back of an elephant, in the Sal forests of Bandhavgarh, to the seven people to a paving stone is corporeal in the Chor Bazaar in Mumbai.

We slipped between the silver and gold worlds of the billionaires in the most expensive real estate in the country and the grey Dharavi slum, the most densely populated place on the planet, in a matter of streets.

From the taxi to the station we noticed three children sitting on the middle of road on the roundabout, the cars swerving round them as if it was normal.  The driver told us they were following the shade thrown from the overpass, the only relief from the heat for the dispossessed and unwanted.

Far from being shocking, or shaming or repellent, the poverty made my children grateful for what they have and this has trickled down through the rest of our life. They know that it is an accident of birth where you get your start in life, and feel it is almost rude if they don’t make the most of their opportunities; it is as if they owe it to those children they saw not to squander it.

Then by contrast we ended our journey on the coast of Kerala, down in the tropical south-west corner. Here a night on a houseboat in the tranquil network of backwaters fed by the Arabian Sea is an escape from the world that makes reality bearable again. Kerala is a place of Ayurvedic massages, coconut milk drunk straight from the shell, sun salutations, and walking the white beaches as the dolphins leap in the waves at dusk.

India was overwhelming, irresistible, awful, hard, and enthralling, I loved it and hated it, and often both at the same time.  I haven’t mentioned the monkeys at breakfast, the white uniformed dabbawalla Tiffin run at midday, or Kathputli puppet shows at night. Neither have I mentioned the cows that follow trains eating used toilet paper from between the tracks. I am so glad I have tasted its tumult and been spat back out again. I am even more keenly indebted that my children have been seared with its scheming and wisdom and heartlessness and passion, and were left more thoughtful, appreciative and compassionate.

You may be more adventurous, your experiences will definitely be unique, but they are certain to be beyond compare.

From the “stingy” food, the staring, the scamming and hustle, and the relentless restlessness to the sublime, every memory is scrawled like indelible intricate henna patterns across our minds. At Christmas when we hang the wooden carvings on the tree that we brought back, we remember India’s real souvenirs.

Melanie Gow is a writer, speaker and photographic artist who believes life is a brief shot at something incredible. Her book, Walking With Angels, is the inspirational story of walking the Camino de Santiago with her sons, aged 12 and 16, and is available on Amazon. For more details about Melanie and her book, visit her website, www.myofficetoday.co.uk.