Wander Woman: Learning to breathe with a dive Down Under

Your monthly dose of notes from the road by Wanderlust’s editor-at-large Phoebe Smith, as she faces her fears and finally learns to dive

Just breathe. It sounded like such a simple demand. But no matter how much I tried, I just couldn’t do it. I felt the weight belt around my waist pulling me down into the dark blue water, which was so deep I couldn’t even see the bottom. I could hear the air flowing into the regulator in my mouth, but for some reason I just couldn’t breathe normally.

Above me someone was pushing on my head, trying to help me go under the water properly. I began to panic. Suddenly I had an urge to pull the regulator out of my mouth and scream. I banged on the boat and lifted my head out of the water with force. “I can’t do it,” I said, “I want to get out.”

Within minutes I was stood back on the boat, while the oxygen cylinder was being taken off my back and the weights removed from my waist. All of a sudden I could breathe again.

That was nearly 12 years ago, that fateful day when I decided to undertake a try-dive in Australia on the Great Barrier Reef. It sounded utterly magical – the chance to breathe underwater and to take in the myriad wildlife under the waves. The sun was shining, the breeze was cooling, it was perfect conditions to do it. However, I soon realised that I was – quite literally – out of my depth. I wrote myself off as a snorkeler only and vowed never to do scuba again.

But, over the years, travelling to places renowned for their dive sites, I began to feel I was missing out.

“Are you sure I’ll be able to do it?” I asked Paul from Oyster Diving who I decided to call one day when curiosity got the better of me.

“Loads of people have bad experiences on try-dives,” he explained. “You should never try it for the first time in the middle of the ocean not knowing what any of the equipment does.”

The more Paul reassured me, the more my confidence began to grow. Within minutes I had signed up to do my PADI – the internationally recognised scuba qualification.

Following an intense day of reading all about the theory of scuba diving and completing the online tests, I was finally ready to face my fears.

“Get ready,” said instructor Melvin at the heated pool the next day. “From this moment on you will be hooked.”

I listened as he showed us how to set up the scuba kit. Having done my theory it was a case of putting it all into practice and was actually easier than I thought it would be. After doing a swimming test, proving I could swim 200m without stopping and tread water or float for up to 10 minutes, it was time to put on the gear. The weight belt was the worst – as soon as I had it on it took me back to that day in Australia and I could feel myself start to shake.

What did help, however, was being able to stand in the pool, suited up, then sit on the bottom and breathe a few times, knowing I could stand any minute and get myself out of it.

We spent several hours moving from the shallow end to the deep, learning how to take the regulator out of our mouths underwater and recover it too. I learned that to breathe underwater was not only magical, but it also was the way you controlled your diving – giving you the ability to rise or sink in the water without having to kick or even move your arms.

By 5 o’clock that afternoon I had passed my confined dives and there was only one thing left to do – my four open water dives over two days. I booked it immediately for the following weekend. 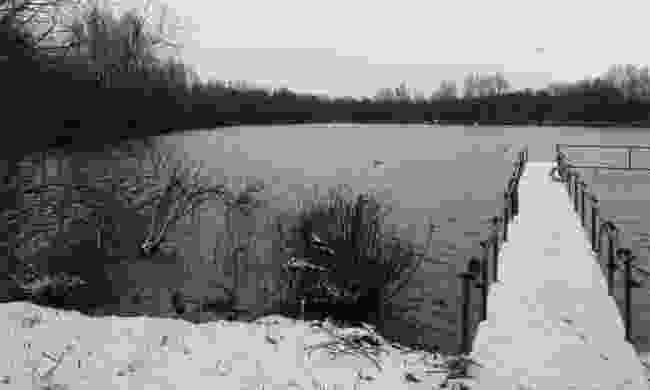 Snow. At least several inches of it, sat not only all over my car and the grass but also all around the edge of Wraysbury Lake. Thanks to the so-called ‘Beast from the East’ my open water dives were taking place in an outside temperature of 0°C and a water temperature of just 6°C. As such we would have to be doing this in dry suits rather than wetsuits. It was going to be cold.

As I walked along the jetty ready to do my giant stride into the icy water I felt my legs noticeably wobble but I did it. I took the leap and plunged into the water feeling it’s chill run all over my body. Surprisingly however I did not feel afraid, in fact, I almost felt a little excited.

There was so much to concentrate on over those two days that I temporarily forgot about how cold the water was – it was only when I got back out the water that I felt the icy chill of the breeze and immediately ran to the café to warm up.

By my last dive I began to notice things – crayfish that popped out from the silted bottom and ran around below. The wrecks that had been sunk to provide divers with something to look at. And the feeling of utter joy at being able to breathe underwater and feel I was in control. I was ready for more.

As I sat typing this, I’d just come out from the water in Australia where I finally returned to the scene of the crime on the Great Barrier Reef. This time before putting on my scuba gear, though, I knew exactly what to expect. I was still a little nervous, but also ready to experience warm and clearer waters – they say if you learn to dive in the UK then the rest of the world will blow your mind. 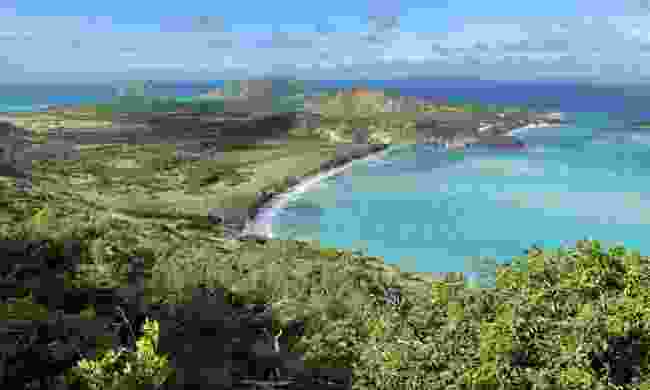 Wearing only a ‘stinger suit’ – similar to a leotard to protect from box jellyfish – I rolled backwards into the water from the zodiac. I immediately felt like I’d plunged into a warm bath. A few breaths on the surface and we were headed under.

Instantly I could see more than I ever thought possible. The reef wall stretched below me and I followed all the way to the bottom at 15m. As I descended I saw giant multi-coloured parrotfish, the triangular face of an angelfish, brain coral, mushroom coral and giant clams. I could sit on the sandy floor and watch clown fish move between the sea anemone and then fin my way up and down between brittle starfish and the white tubes from spaghetti worms, while giant sea cucumbers cleaned debris from the ocean floor. It was a dazzling display of a previously hidden marine world.

Before I went under I didn’t want to stay in the depths for long, but I hadn’t even checked the time before I was told my 45mins was up and we headed back to the surface. The instructor turned to me, took off her mask and regulator and laughed: “I kept going to point things out to you, but you were in awe of everything!”

I smiled. It may have taken me 12 years to get here but in the end I proved that when it came to facing my fears it really was as simple as breathing.

There’s an abundance of sites to check out all along the massive expanse of the Great Barrier Reef, but come here and you’ll notice a distinct lack of crowds. Not only is this little patch of land a National Park, but it’s also home to a research station where naturalists and scientists are located (and offer tours) to show the work they are doing under the sea. Base yourself in the luxury lodge (the only accommodation on the isle) or at the campsite (you can get here by small plane or boat) and the inner and outer reef is, quite literally, on the doorstep.

You can’t really pick a ‘bad’ part of this island chain to get your fins wet. With warm temperatures (around 27 degree C), calm waters and excellent visibility there’s a multitude of sites on offer – not to mention resorts, which offer equipment hire and instructing. Better yet there’s a chance to see much more than just fish – these waters are renowned for manta rays often called ‘the angels of the sea’. There are special feeding platforms where you can sit on the ocean floor and watch in key areas, plus you might also be lucky enough to see a whale shark to...

Remote – but easily accessible via a flight from Bali – this little island sits in an area known as the ‘Coral Triangle’ meaning it has the best bio-diversity of any marine environment in the world. Most creatures you might want to see – big or small – you will likely find here. From turtles to marine mammal, fish of every size, shape and colour, and utterly pristine reef – which can be accessed in water as shallow as 4m, making it perfect for newbies or the more experienced alike.

The smattering of islands that form this Caribbean archipelago seem to have been almost purposely placed to ensure protected dive sites out of strong currents. Not only that, but most are within the 18m limit of a PADI Open Water qualification and include famous wrecks of vessels such as the RMS Rhone – a Royal Mail Ship caught in a hurricane in 1867 and there’s even a stretch of water off Cooper Island called ‘Wreck Alley’. So if seeing decaying, barnacle encrusted hulls floats your boat (or not, as the case may be) then this is well within a beginner’s remit.

Best for… those on a budget

With an abundance of dive schools – where you can get your open water certification or simply hire a guide/instructor – when it comes to this small island off the coast of the Malay Peninsula, it’s a case of supply and demand. Here your baht will go further than anywhere else, with fierce competition for your business. Naturally you need to ensure they instructors are up to standard – check reviews on diver’s forums, ask lots of questions (i.e. if the Master Diver comes on the trip and make sure they make you fill in a medical questionnaire) but otherwise grab a bargain and enjoy the calm waters.