India’s holiest city is an emotional rollercoaster, but nowhere else captures the human spirit so vividly. Wanderlust guides you through the city of ghats...

How to plan your trip

Varanasi lies in the state of Uttar Pradesh, halfway along the Ganges’ flow from the Himalaya to the Bay of Bengal. You can fly from Delhi in 80 minutes, but the 11-hour train ride is a wonderful journey.

When to go: November to February is the optimum time to visit, with October and March still a little warm. The winter months offer clear days and bright sunlight.

Getting there: Indian Airlines and Jet offer a range of domestic flights from Varanasi’s airport; Varanasi-Delhi takes from around 80 minutes. Direct flights to Kathmandu are possible at certain times of the week. There are several trains a day to Delhi; journey time is around 11 hours.
Varanasi Junction, also known as Varanasi Cantonment, is the main station; many of the faster trains between Delhi and Kolkata stop at Mughal Serai train station, 12km south-east of Varanasi.

Getting around: The old part of the city – the focus of most tourist activities – lies along the west bank of the Ganges, and is most navigable by foot or rickshaw. Transport in Varanasi ranges from wooden boats along the Ganges (try not to pay more than a few hundred rupees per hour) to cycle rickshaws (10-20 rupees per km) and auto-rickshaws (20 rupees per km up). On foot remains the easiest way to navigate the narrow alleys. A taxi to the airport should cost around Rs350 (£4.80) from the old city.

Top 5 highlights of The Old City

Varanasi’s ancient heart stretches along the Ganges from Raj Ghat in the north to Assi Ghat in the south. It’s best explored on foot or by rickshaw. 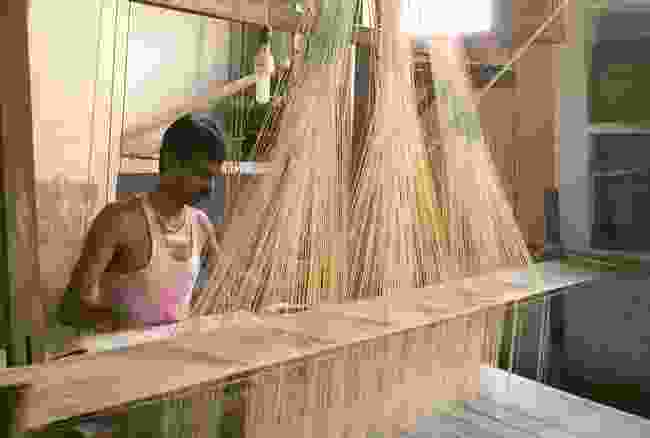 Watch a weaver working a traditional handloom. It’s both mesmerising and an endangered art form: with mechanisation and cheap Chinese silk threatening the industry, this poetic sight is growing scarcer. 3. Oil lamps on the Ganges Join the evening aarti ritual at Dasaswamedh Ghat (aka ‘Main Ghat’) – thousands gather to launch floating oil lamps onto the Ganges, a major part of the city’s devotional practice. Beginning at dusk, the sight of thousands of lights speckled across the mighty river is enchanting.

4. See the Ganges at dawn 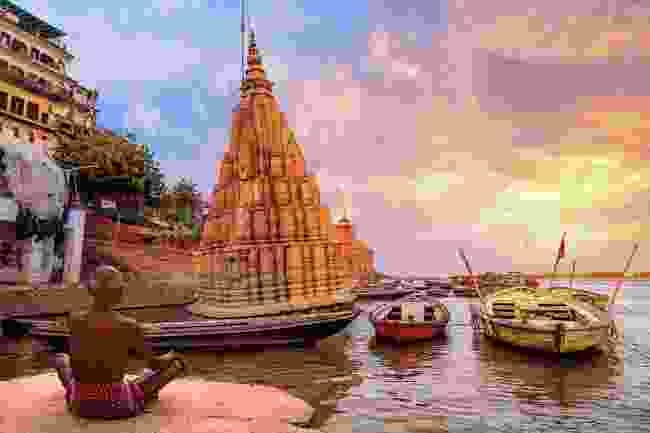 A man meditates at sunrise in Varanasi. (Shutterstock)

Absorb the mystical atmosphere on a dawn boat ride on the Ganges. Arrange this from your hotel to avoid riverfront haggling, and get up at around 5:00AM in time to see a pale sun rise over the river. Witness a traditional cremation at Manikarnika Ghat – it's shocking, moving, and highly educational in terms of understanding the Hindu worldview. Stand well back, don’t take photos, and refuse all offers for 'photographic opportunities from our private balcony' - a well-known tourist scam. A man prays by the Ganges in Varanasi. (Shutterstock)

If the overwhelming activity in Varanasi is worship, it’s the Ganges herself, the holiest of Hindu rivers, that receives the largest proportion: her waters are drunk, bathed in and bottled, and for those who cannot afford cremation it is enough simply to cast the body into her waters. For much of the year, a large sandy bank – easily accessible by boat – is exposed on the far side, making a great and uncrowded place to take it all in. For most visitors, Manikarnika Ghat is both shocking and deeply moving: smoking cremation pyres, piles of timber, wandering livestock, shaven-headed mourners and a dramatic, soot-darkened temple half-sunk in the water. This is not a melancholy place, however, so much as a solemn one, where the dead are propelled onwards to the sound of chanted mantras. Arrive by boat or on foot from Mandapur Road.

The Vishwanath Temple is the most important Shivaite shrine in Varanasi; its 15.5m spire shines with 820kg of gold. The inner sanctum is forbidden to non-Hindus but you can get a good view from the second-floor window of the Udai Silk Shop, although don't snap a photo, even from here. In the fifth century BC, Buddha preached his first sermon at Sarnath, 10km north-east of Varanasi, speaking on how to end suffering and achieve enlightenment. Within the deer park complex the large Dhamekh Stupa still stands, as well as several other Buddhist structures.

One of the oldest, and certainly the busiest ghat in Varanasi, Dasaswamedh is known simply as ‘main ghat’. It’s a mind-boggling medley of spiritual and possibly profane activities, with its endless stream of devotees, knuckle-cracking masseurs, beggars, barbers and saints. It’s a place to be a little wary, and endlessly amazed. Massages here are surprisingly good, though perhaps best avoided by women. Visit on foot, and protect yourself from the sun – there’s little shade. 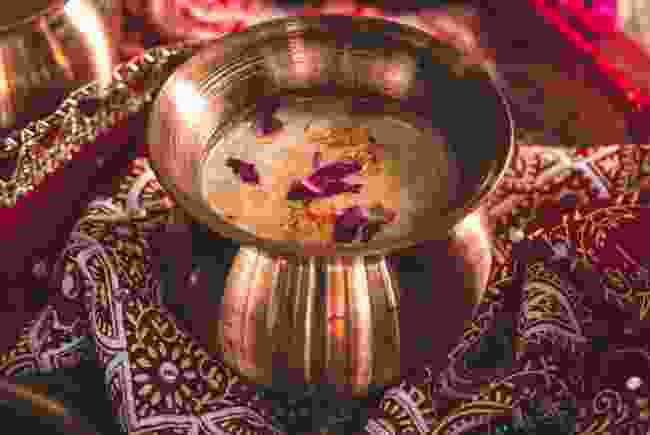 Thandai is a sweet, refreshing drink made from almonds, pistachio, cardamom, milk, dried fruits and, on request, bhang (a beverage that uses marijuana). It’s best tasted at the Godowlia roundabout – look out for shops like Thandai Corner, or ask a local. 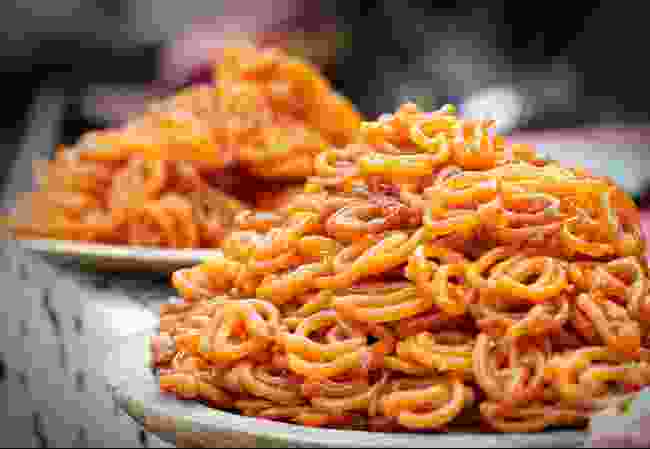 Varanasi offers the best mithai (Indian sweets) in the country. These incredible concoctions – made from boiled milk, palm sugar, spices, nuts and dried fruit – are a genuine art form, and unspeakably delicious. Ksheer Sagar, at Sonapura, has some of the best in the city, as well as a clean, modern interior. 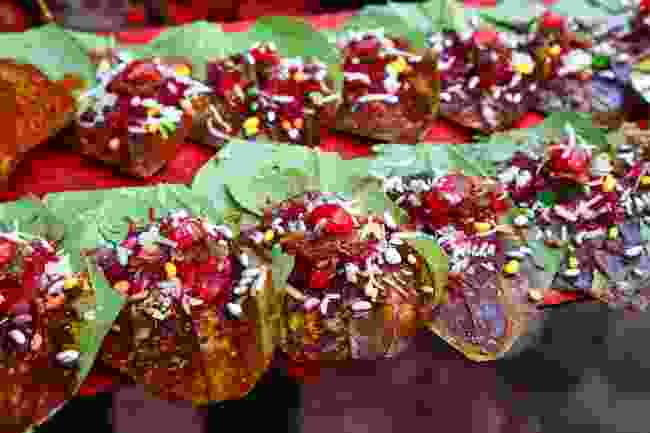 Paan, a mildly intoxicating mix of betel nut, lime, tobacco and tree resin, is chewed with alacrity in Varanasi – the streets, as well as the lips of the adherents, are stained crimson as a result. Get it from Keshav Paanwala at Lanka, or Tambuul Bhandar at Godowlia.

Street food reaches a sublime peak in Varanasi and, because of its popularity and the fact it’s generally fried, is fairly safe. For a true Benarsi breakfast, check out Kashi Chaat Bhandar at Godowlia, where you can join locals for a kachori sabzi – a round, flattened ball of pastry filled with dal, besan (chickpea flour), black pepper, red chilli powder, salt and other spices.

Try a South Indian treat – world-class dosas, idlis and uttapams, and blended cold coffee – from the cheap, clean and fantastic Kerala Café at Bhelupura Crossing. Worth making the trip across town for. 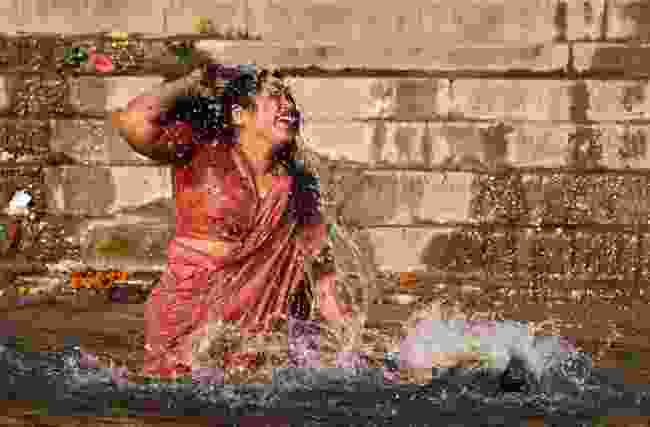 Shivaratri (February/March) is the mother of all Varanasi festivals. It celebrates the marriage of Shiva and, this being Shiva’s city, and Shiva’s intoxicant of choice being bhang (legal from government-approved shops), the result is immense crowds of slightly stoned Hindus, all heading for a bathe in the river.

When the sun enters Capricorn (January) the Makar Sankranti Festival is celebrated, with every child (and most adults) taking to the rooftops to launch patang (fighting kites).

Observed to celebrate the arrival of the holy river from heaven, Ganga Dussehra (May/June) involves the lighting of a special 50-wick lamp in honour of the goddess. 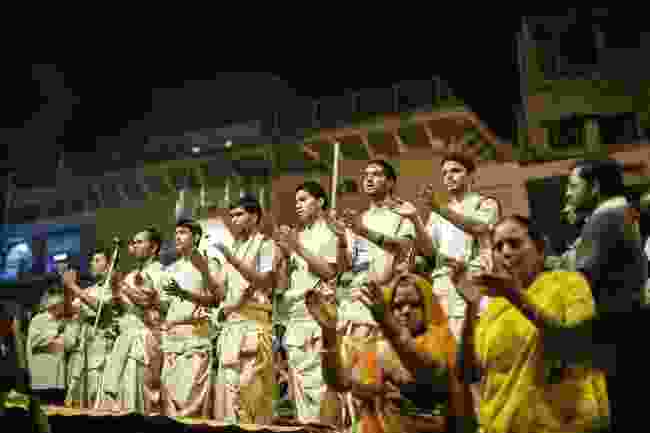 Durga Puja (late September/early October) is a five-day festival to honour the slaying of the demon Mahishasura by the goddess Durga. It involves the erection of a pandal, a temporary pavilion, where ceremonies and rituals take place. Witness it at the Ramakrishna Mission, Luxa Road. Every autumn, Ramlila – devotional plays re-enacting scenes from the Ramayana – are staged across India. None is more spectacular than that at Ramnagar Fort. Continuing for 30 nights, and watched by the Maharaja of Kashi from the back of an elephant, this festival is a magical piece of sacred India. Photography is forbidden.