7 of the most unique gypsy caravan experiences in Britain

As glamping becomes ever more popular, there is one camping experience that has a particulary romantic allure: the gypsy caravan.

With the help of Cool Camping's new edition of Glamping Getaways, we highlight seven of Britain's most unique gypsy wagons you can spend the night in. 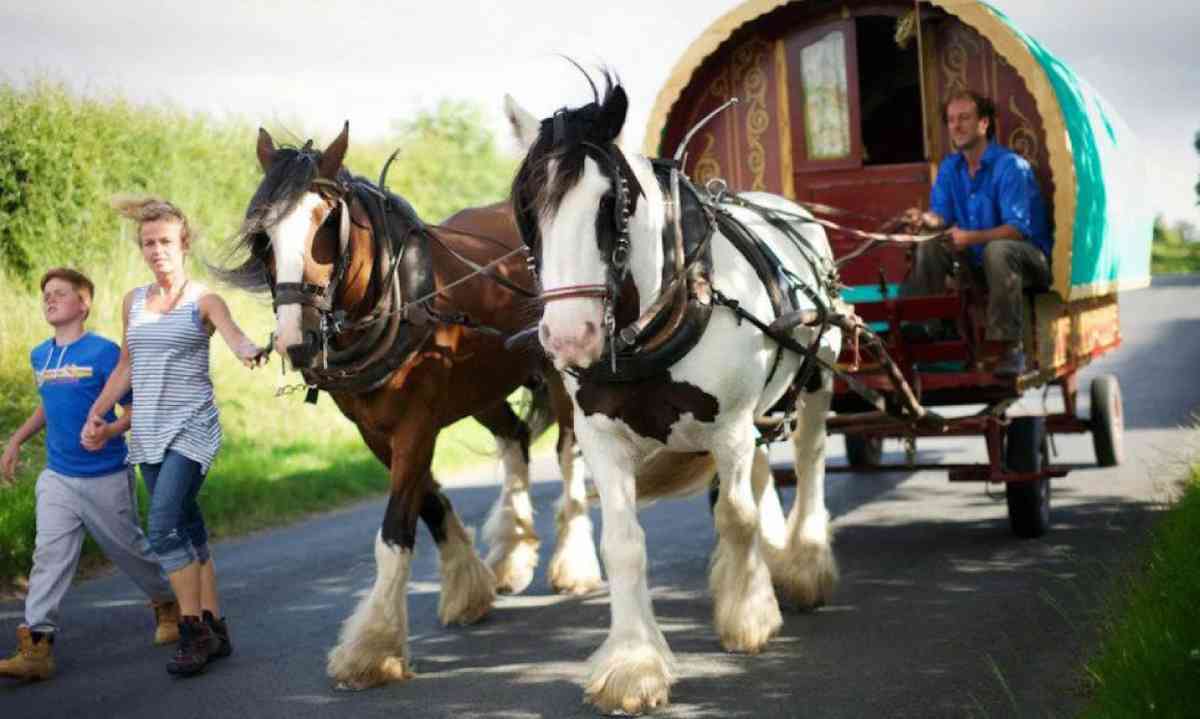 In Cumbria you don’t just sleep like a gypsy – you get the chance to live like one too. At Wanderlusts gypsy caravans your wagon changes location every day, being pulled by a horse lead by Wanderlusts founder Barney who will be your personal guide. He will take you to new villages – giving you an authentic experience of gypsy life. You may even have the chance to take the reigns yourself, on quiet country roads with Barney on hand to offer assistance.  You’ll stay in secluded meadows and quiet villages near Edenhall and Penrith for up to five nights as part of your stay.

Brainchild of owner Barney Maurice – who ran away to join the circus as a trapeze artist at just 16 – he and his wife Katus Young (herself an musician and world traveller) have many a story to tell.

Spend your days on the move and your nights sharing stories with the intriguing owners. You might just return home wishing that your own house moved. 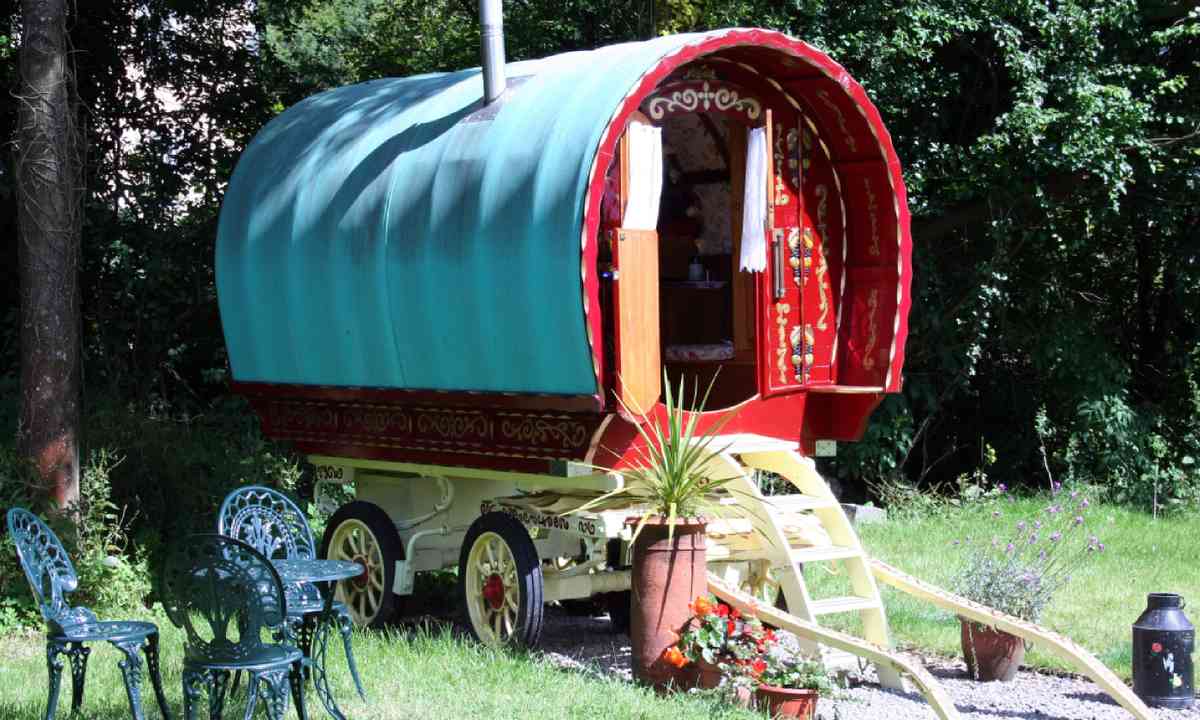 A battlefield might not seem the obvious choice to get a good night’s sleep, but trust us on this one. Situated in the grounds of the 18th Century mansion Powis House, just a stone's throw from where Scotland began its fight for independence at the Battle of Stirling Bridge in 1297, rests the tranquil Bramble Bield.

With the violence of those days firmly in the past, you can spend your time enjoying the peaceful surrounds, toasting marshmallows over a crackling campfire. But to peer further into the past, head to Stirling Castle, one of Scotland's most iconic sites that played an important role throughout the Scottish War of Independence and beyond. You'll be greeted by costumed staff who will make you feel like you've been transported back in time.

Bramble Bield has three gypsy wagons that are suitable for both couples and families, with separate washing and kitchen facilities. 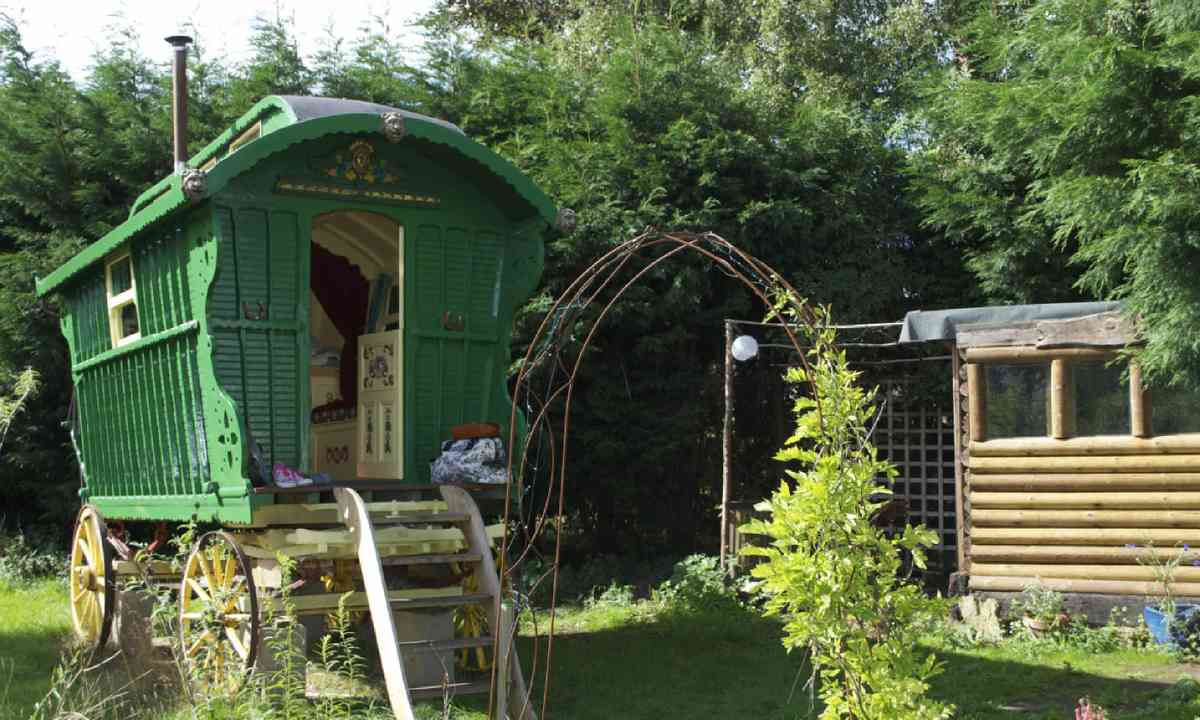 As the fascination with the gypsy lifestyle becomes increasingly popular, more and more gypsy caravans are succumbing to a modern make-over. But that is not the case with Alde Garden's beautiful restored gypsy wagon estimated to be at least 100 years old.

Thanks to delicate workmanship (and lots of recycled materials) Alde Garden's gypsy wagon contains all the traditional touches so you truly escape into the gypsy lifestyle.

When you're not snuggled up in your cosy accommodation, you can enjoy a scenic horse ride at Alde driving horse and carriage rides or Iken Bay Riding, explore 500 years of history at Helmingham Hall Gardens or get a taste of Africa at the Africa Alive! Safari park where you'll spot giraffes, zebras, rhinos and ostriches. 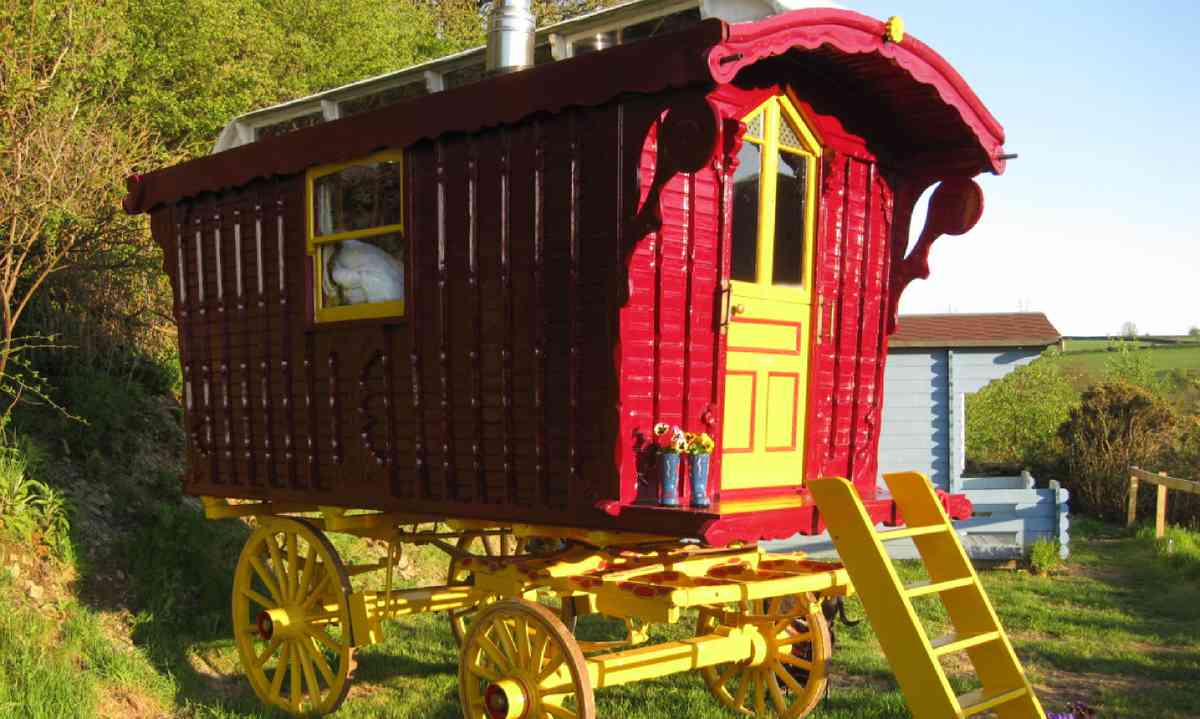 Deep in the rolling green hills of the little-visited Teifi Valley, cut off from the rest of civilization, sits The Ceridwen Centre campsite.

Wake up to awe-inspiring views of the Welsh moors and breathe in the fresh country air after a comfortable nights sleep in a traditional gypsy wagon complete with its very own stove to keep you warm and cosy.

And its not just the scenery that's green as The Ceridwen Centre includes solar water heating, biomass boiler and solar electricity – all features that won it a Sustainable Tourism Gold Award for Carmarthenshire in 2015/16. One things for sure, your busy modern life will seem like a far-off memory. 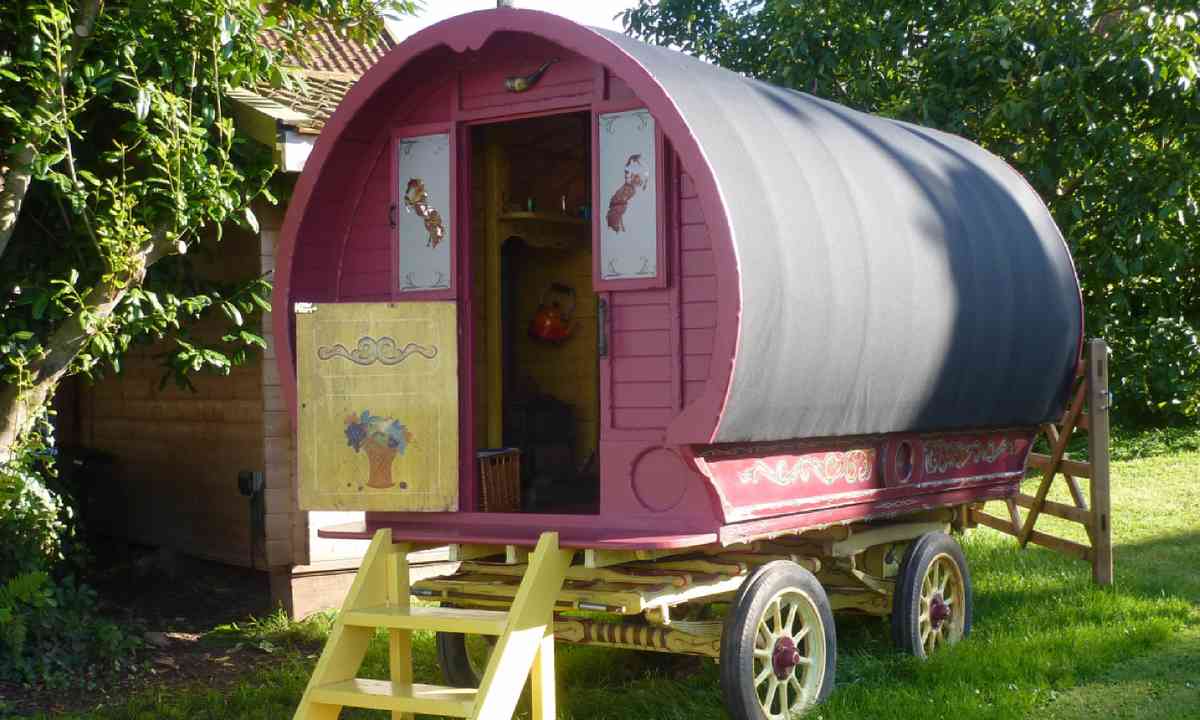 If food is your thing then Huntstile organic farm in Goathurst, Somerset offers the gypsy van experience for you.

Located in over 650 acres of organic farmland and inspired by owners Lizzie and John's passion for food, you'll be staying in a haven for fresh vegetables, fruit, wheat and barley you can eat direct from farm to fork. There is an onsite organic cafe serving purely fair trade food and you can even try your hand at making your own British bangers at one of Lizzie's sausage-making courses. Fresh food can also be purchased from the site when available.

Animal lovers will be in their element too on this working farm with goats, cows, pigs and chickens on site. The gypsy caravan here is quite petite (best suited to couples) – so best not indulge too much in the food! 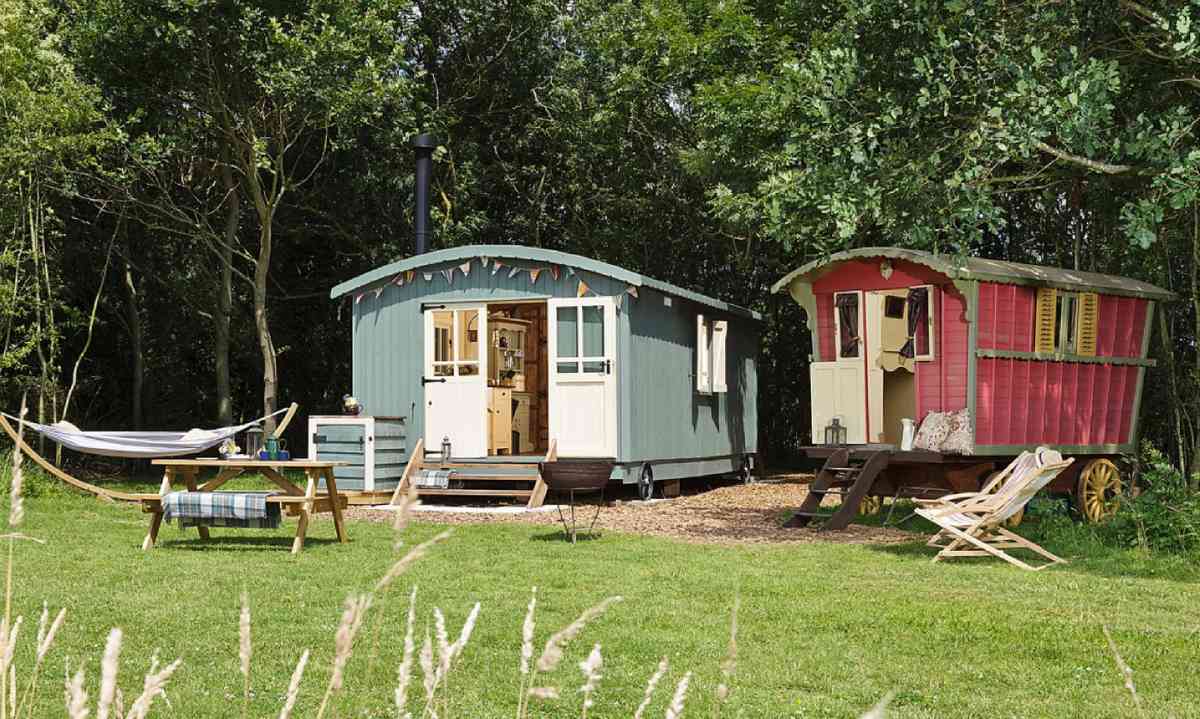 At Secret Meadows you won’t just feel good from a great night’s sleep, but you’re also allowed to feel suitably smug that you’ll be helping to support The Sinfield Nature Conservation Trust by staying at White House Farm, that has been owned by the trust since 2005.

White House Farm, where Secret Meadows is situated, is a haven for wildlife. You can spot over 50 species of bird including nightingale, kingfishers and spotted woodpecker.

The spacious gypsy caravan comes with its own kitchen, fitted wardrobe and en suite complete with shower so offers a little bit of luxury in return – see it pays to help out a good cause. 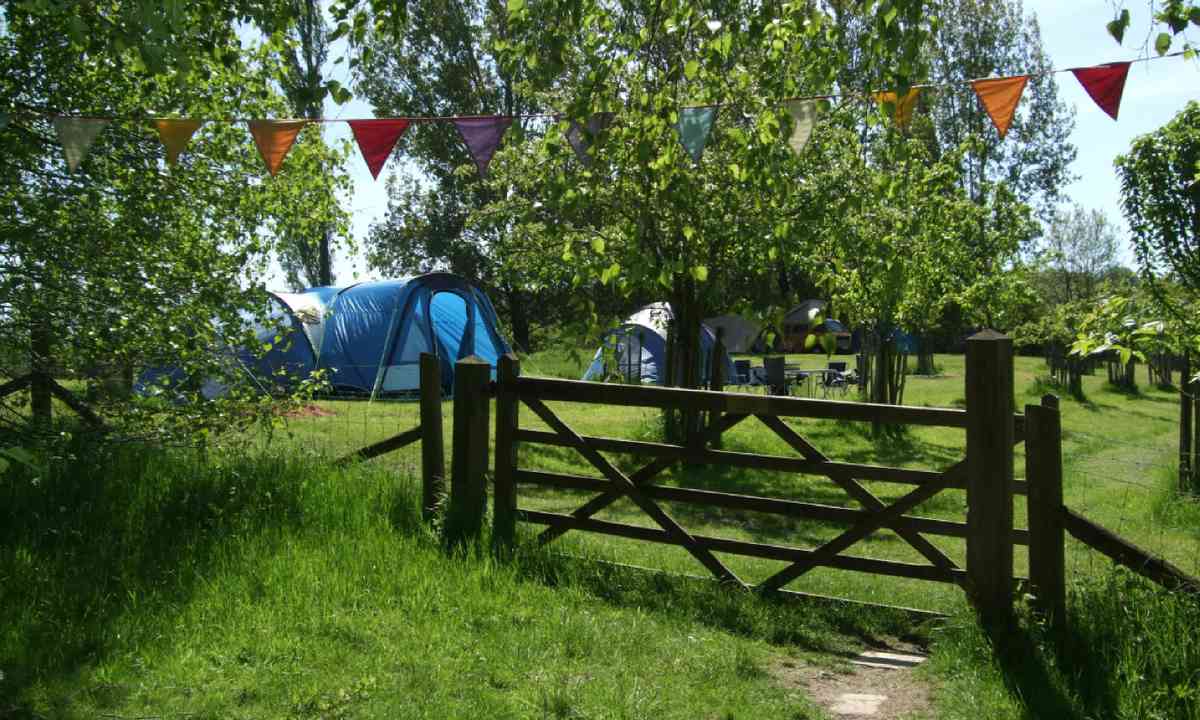 You can actually say you’re ‘king of the castle’ in one of the gypsy vans at Cotswolds Camping. Placed on the site of an old Norman Castle, a magnificent moat now stands in its place. You can walk in the footsteps of history in Holycombe, that local mystics believe was once a sacred Neolithic site.

From your regal location you can admire the rich plant life of the adjacent Whichford Wood, enjoy live music at the award-winning Norman Knight pub and even take a gardening masterclass or adult pottery lesson.

The small gypsy wagon is designed for couples or solo travellers (no little prince or princess allowed).

The second edition of Glamping Getaways from Cool Camping is on sale now at £16.95