The top 5 hills in Wales to explore

The hills of Wales are so beautiful, there have been songs written about them. Author Jim Perrin picks his 5 favourites for walking, exploring and unforgettable experiences 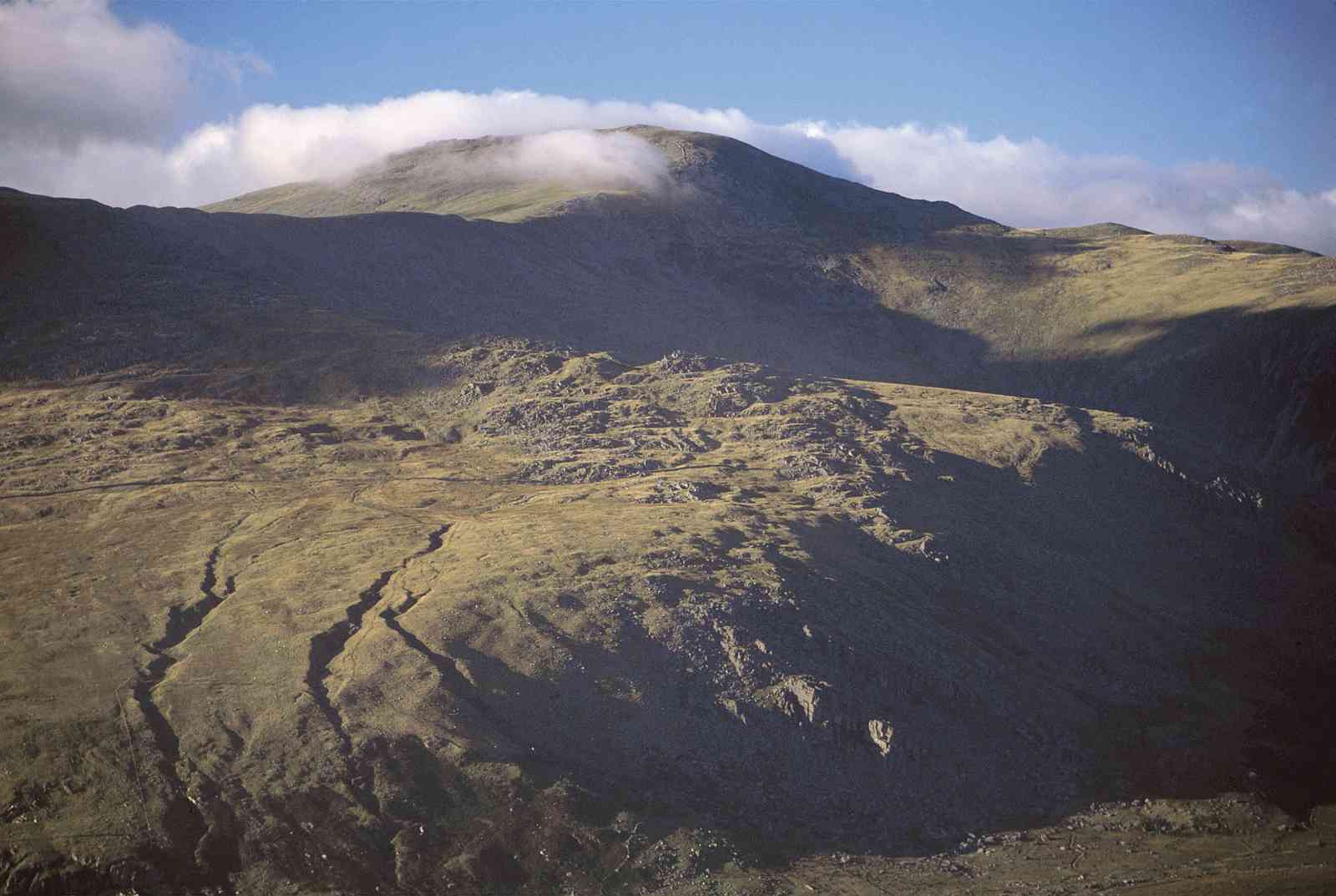 The second highest of all the Welsh hills, the swelling dome of Carnedd Llywelyn is the axis and radial point of a mountain massif that, for distance from shelter and spacious character, is only rivalled among British peaks by the Cairngorms.

Snow lingers a long time here. The summit plateau has something of the feel of the Arctic or Canada's Barrenlands. Dotterel pass through each spring on their way to their northern breeding grounds. The wind scours unobstructed across a frost-heaved bleak tundra of shattered stone and club mosses.

Carnedd Llywelyn feels a long way from both the town and valley, and looks down over the tidal sandflats of Traeth Lafan, which gather the light and reflect the descending sun. The hollow summit cairn is a perfect belvedere from which to watch it melt down and disappear below the horizon, before you too are seized by the anxiety of nightfall and feel the need to make your way down to home comforts, as the afterlight flares along the stretching ridges and darkness fills the valleys. These are the times that bring the unforgettable mountain experiences. 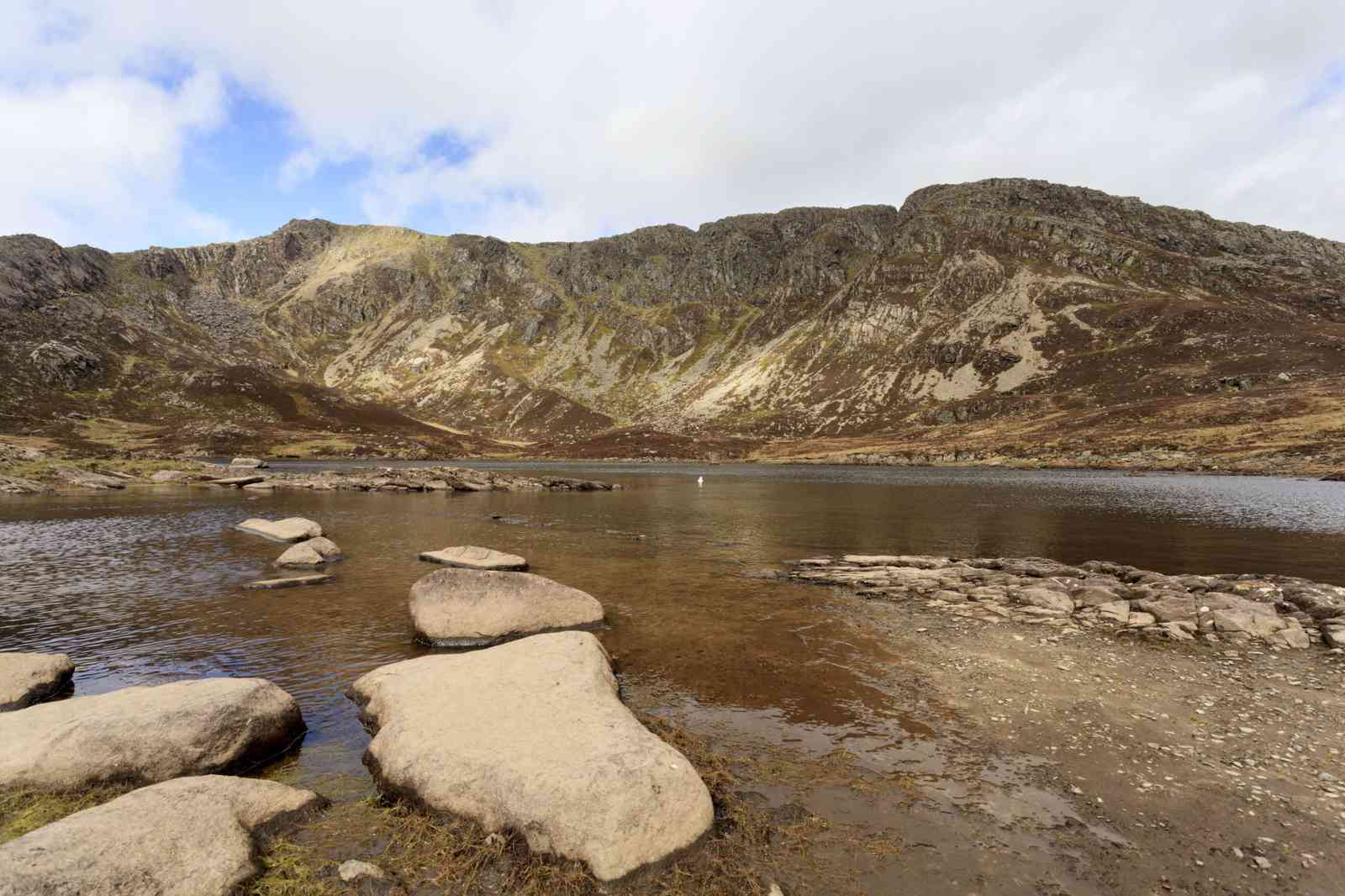 One of the best ways to get up any of the Welsh hill summits is the elegant ridge of daear ddu (‘black earth’) that curves around the perfect corrie-lake of Llyn y Foel and takes you, by way of scrambling pitches, up cinder-rough rock directly to the O.S. pillar atop Moel Siabod.

This leonine bulwark between the Lledr and Gwryd valleys, which dominates the view as you descend the A5 into Betws y Coed, is an outlier to the central peaks of Snowdonia and perhaps as good a viewpoint for the latter as you will find.

From its top, the peaks are all laid out before you, the lie of the land made plain. If you find yourself up here on a fine evening, you might be lucky and experience the unique Moel Siabod phenomenon of the black light, in which the shadow of the peak stretching out towards the eastern horizon suddenly seems to turn into a ray of blackness that streams back towards you and engulfs the mountain. It’s magical. 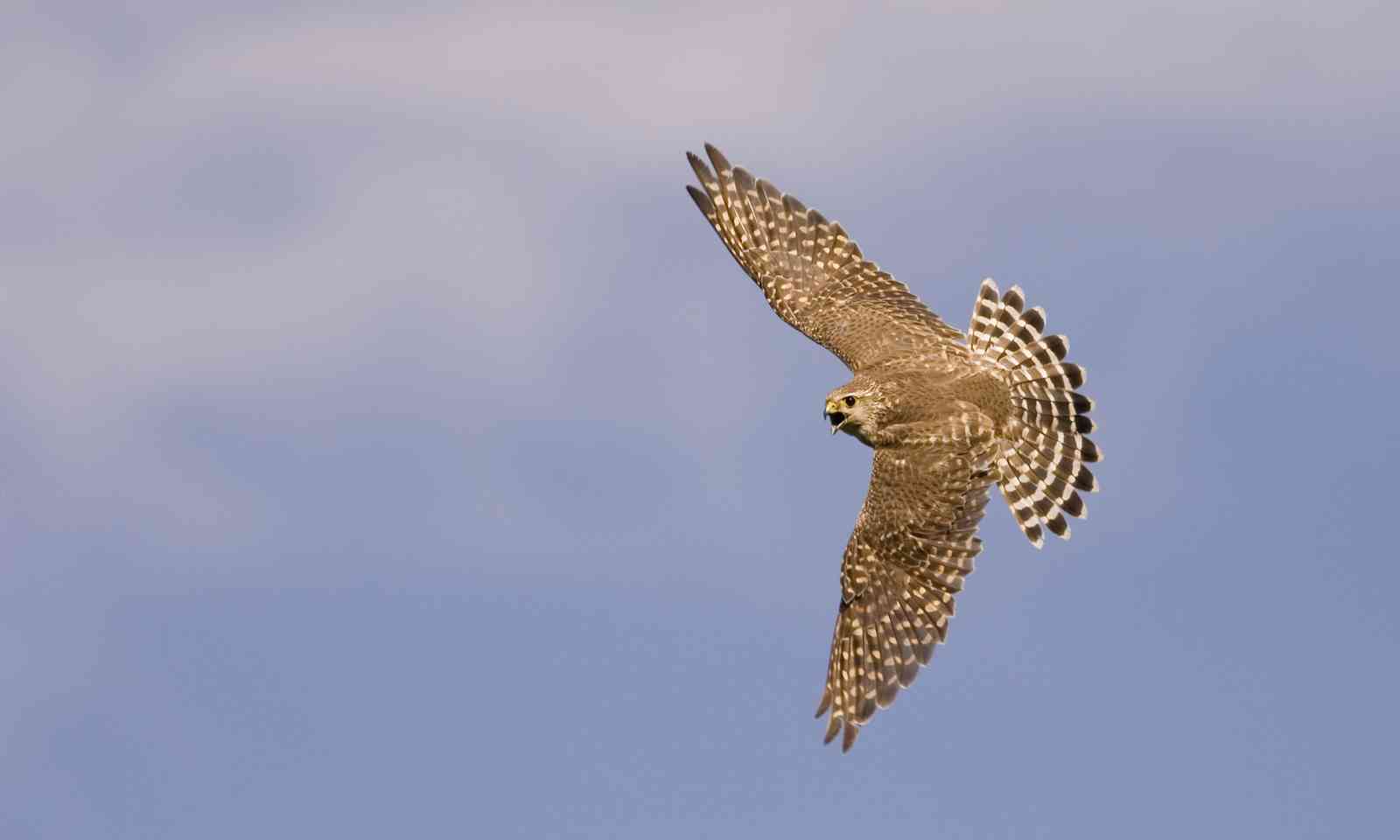 All the way along the west coast of Wales, the stretching arm of the Lleyn Peninsula offers its embrace, showing in silhouette a clutch of fine little peaks that have a miniaturist appeal and a holiday character about them.

Best of them, perhaps, is the canted top of Garn Fadryn that bestrides the narrowing peninsula west of Pwllheli. An ancient volcano, its plateau rim surrounds a Bronze Age settlement, with hut circles scattered among the heather.

There is a sea at either side. On evenings, before or after rain, when visibility is most clear, the Wicklow Hills of Ireland seem almost within touching distance across the water. You’re unlikely to have company up here beyond an occasional merlin, the smallest and rarest of our native falcons, scudding through the boulders in pursuit of its small prey, and bringing back to the place something of the wild character of the people who inhabited here over 2000 years ago. 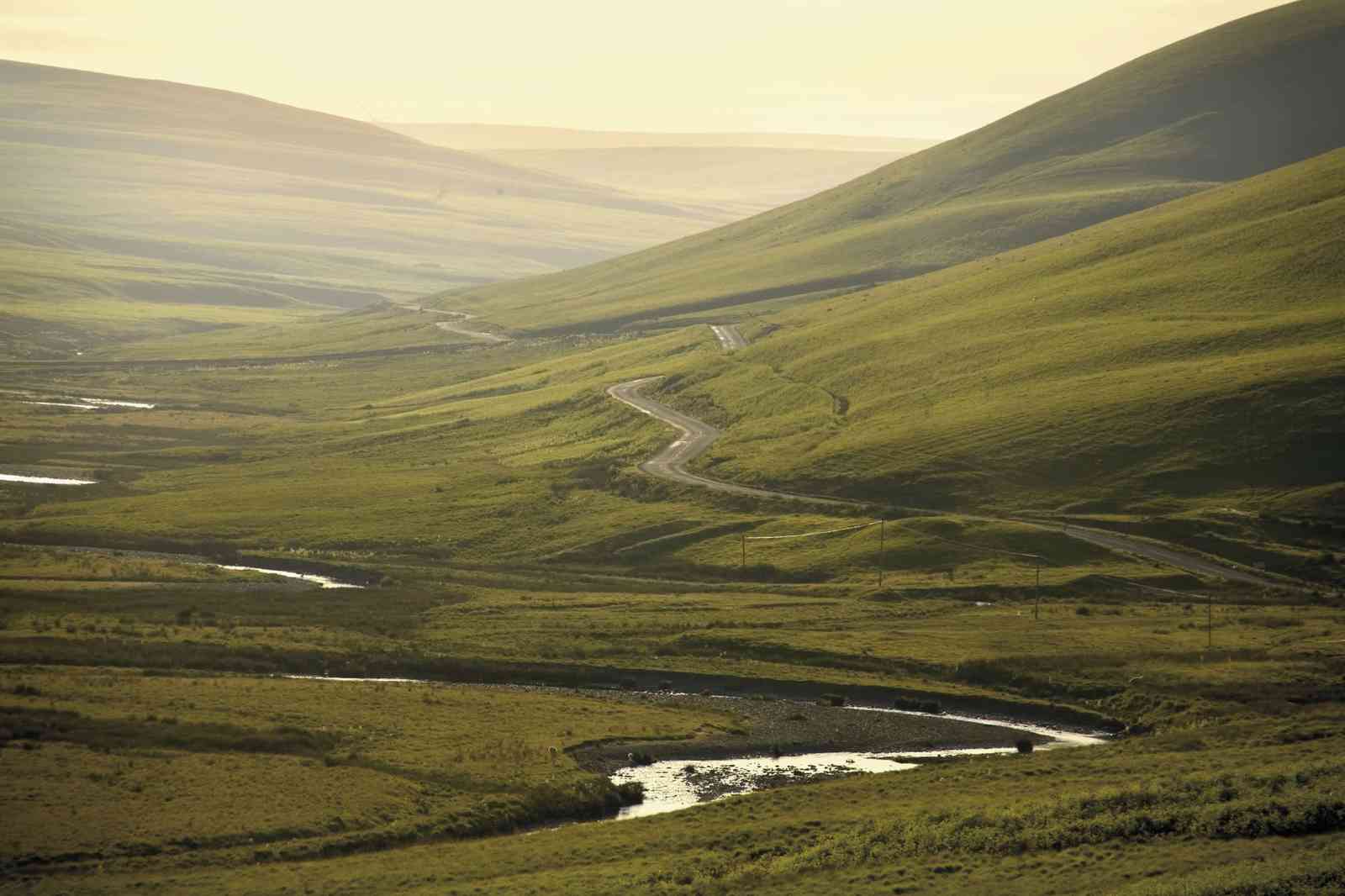 There are hills that draw the eye from many miles away. I’ve seen the proud-standing cairns of Drygarn Fawr, presiding spirit of the Great Wilderness, gleaming away to the east against the morning sun from as far away as Craig Twrch in distant Ceredigion. From Drygarn, on days of exceptional clarity, offshore Mynydd Enlli has been visible far away to the northwest.

Drygarn Fawr is one of the truly memorable and remarkable Welsh hills, and surely the most difficult to access. The nearest road is the wild single track excursion over the Cambrian Mountains between Tregaron and Abergwesyn. Even from there you have three miles of rough and tussocky ground to gain Drygarn’s dragon-crest ridge with its quartz-centred cairns and its outlook over mile upon mile of desolate moorland.

But I’d not approach it that way. Come by way of Esgair Garthen to the north or Gorlllwyn to the south east and I guarantee you as arduous, wild and spacious a hill-experience as you’ll find anywhere south of the Scottish border. 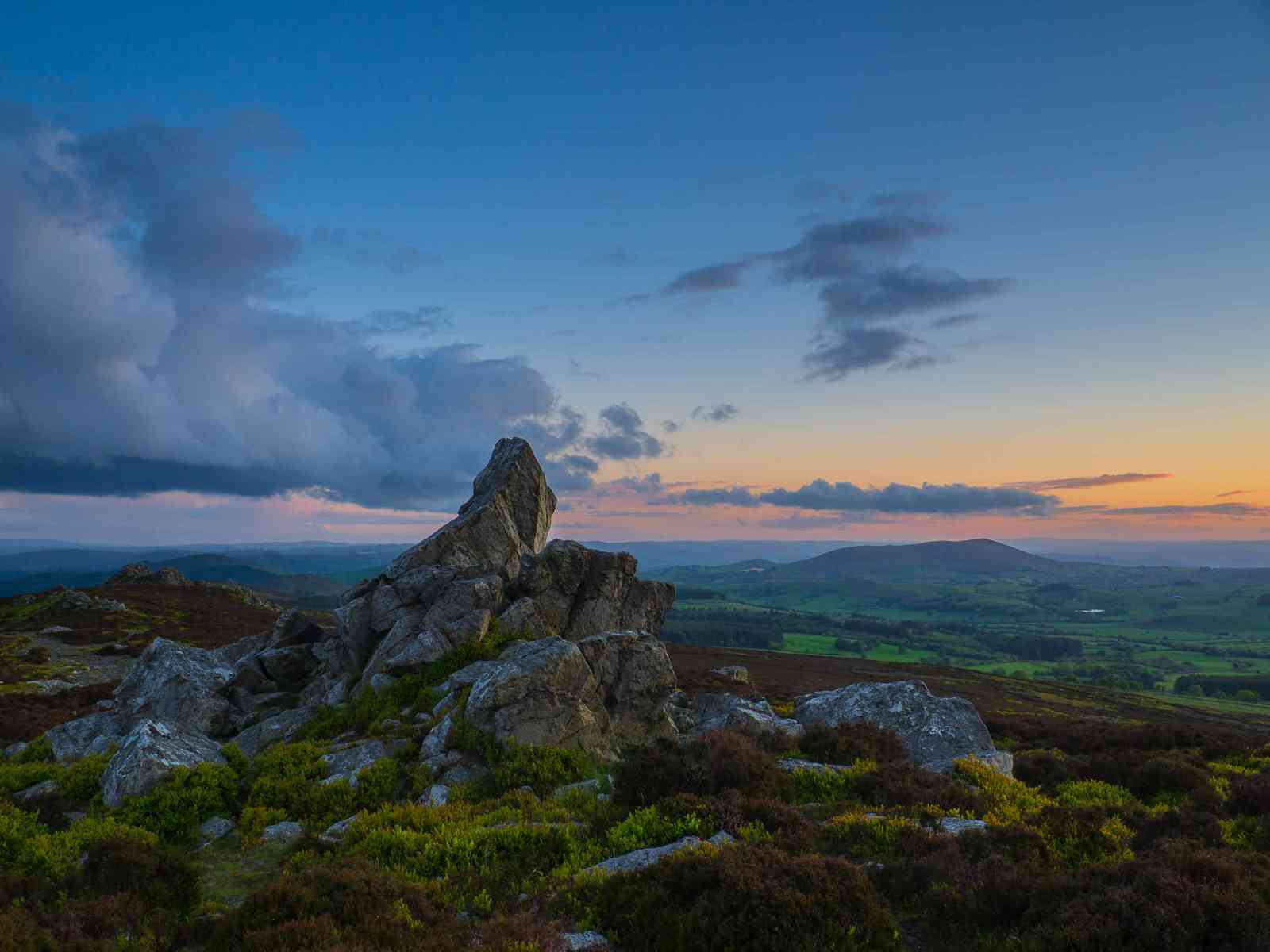 Here’s a hill that can be claimed by Wales only through the vagaries of historical borders. Worthless to the English on account of its boulder-screes, sprawling summit plateau and plunging slopes, somehow a loop of the border drew it back into the principality. It belongs really, through proximity and character, with Shropshire hill country, its close neighbours being The Stiperstones and Stapeley Hill. But Wales won’t complain at having its stewardship.

This whole region is a delight, “one of those places where the spirit of aboriginal England still lingers”, according to D.H. Lawrence.

Pant up the vertiginous slopes to the top, let your legs swing free on the giant’s bench there, scan round the close valleys, ancient sites and spikey tors with the flatlands of England beyond them and the hills of Wales crowding the other horizon, then descend the knee-jarring slopes again to the remarkable ale house of the Old Miners’ Arms in Priest Weston and you will know exactly what Lawrence meant and be equally enthralled.