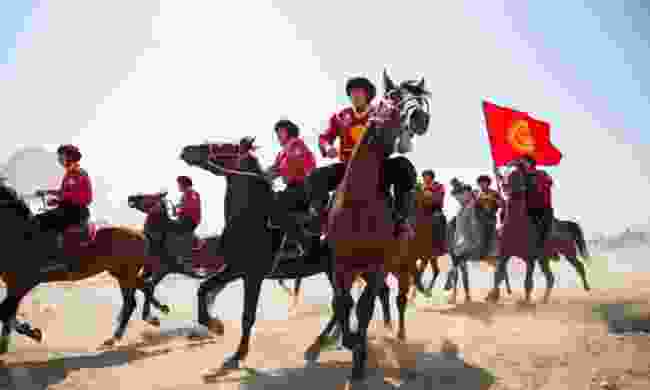 The World Nomad Games are unlike any other major sporting event in the world. After its initial launch in 2014, the event is set to host its third set of games between 2-8 September 2018 in the village of Cholpon-Ata on the bank of Issyk-Kul lake, with over 65 countries competing in nomadic sports. Traditions of Kyrgyz culture are reflected in the games, with competitions on horseback making a regular appearance in the hippodrome, including er enish (wrestling on horseback) and kok-boru (goat polo).

Other activities vary from eagle hunting and foot archery, to yurt racing and ancient board games like oware (a bead-based strategy game). The events captivate an authentic cross-cultural experience in a picturesque backdrop of Issyk-Kul lake and the Tian Shan mountains.

Not only are the views priceless, but the World Nomad Games are too. All sports competitions are free to attend, while tickets for the opening and closing ceremonies are a small price to pay when you're treated to a festival of vibrantly dressed locals, passionate traditional rituals and a kaleidoscopic display of fireworks.

2: Saddle up on a horse trek 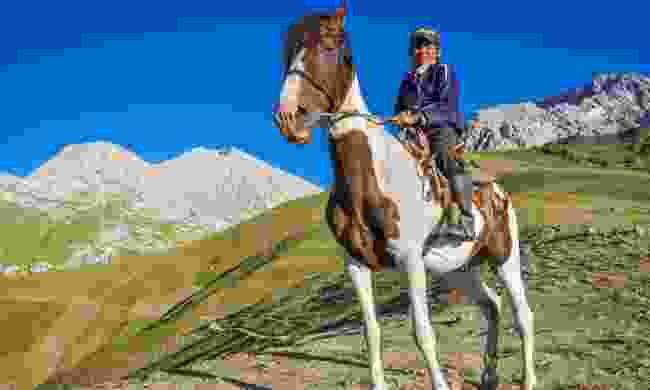 Guided horse treks can be organised through Community Based Tourism (Dreamstime)

Horses have long played an important role in Kyrgyz history and continue to do so. Whether its drinking fermented horse milk (known as kumis), getting around on horseback, or wrestling opponents off balance in a traditional game of er enish, a close encounter with Kyrgyz stallions will enrich your overall experience of the country.

Horse treks through Kyrgyzstan's glorious wild landscapes are second to none. Day treks are available for those looking to take to the saddle for the first time, while a three-day long expedition allows ample time to explore some of the country’s greatest natural highlights, including Song Kol Lake in the north, as well as glaciers and rocky mountains in the Alay region to the south. 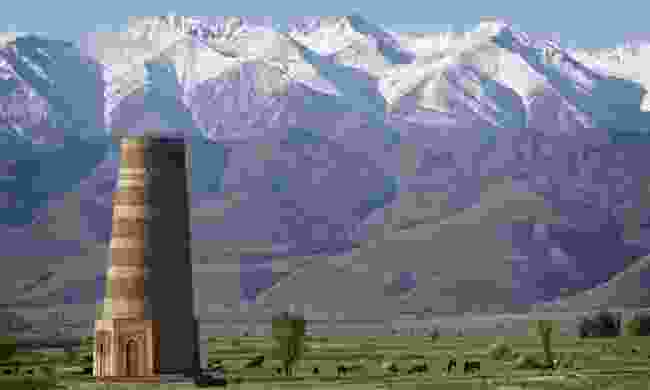 Straddled on the steppe of Central Asia, Kyrgyzstan was once part of the ancient Silk Road connected by its neighbouring countries China, Uzbekistan and Kazakhstan. Although few monuments remain, there are still a handful of sites left for travellers to explore and recall the importance of one of the greatest cultural trading routes in history.

One of these landmarks is Burana Tower, standing 25m tall in the Chuy Valley between the capital Bishkek and Issyk-Kul lake. The minaret is all that remains of the ancient city of Balasagun, which functioned as a key settlement in the 9th century until its capture by the Mongols. Visitors can climb its spiral staircase for panoramic views of earth-hued hills bounding towards the mountain range on the horizon.

Also worth visiting is Tash Rabat, a 15th-century caravanserai that welcomed traders to rest overnight on their journey along the Silk Road.

4: Meet and stay with local communities 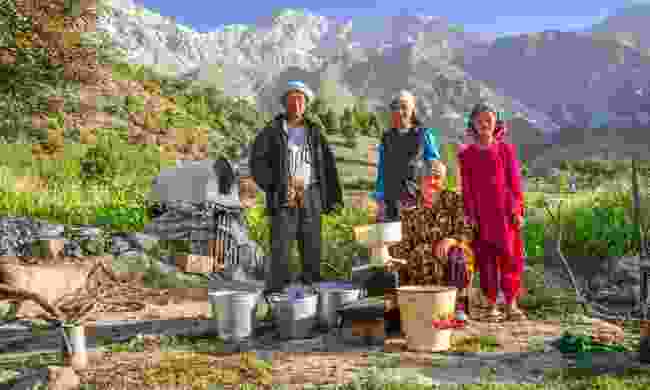 Meet and stay with Kyrgyz families in a traditional yurt (Dreamstime)

The way travellers experience a country extends far beyond a visit to its most iconic sites. Those seeking an authentic experience can do so no better than engaging with a country’s national people – and Kyrgyzstan is a leading example.

Kyrgyz communities are well-known for their warm hospitality, welcoming travellers of all languages to stay for dinner and rest overnight in their family home. Explorers who reach the remote areas of Kyrgyzstan will be familiar with traditional yurts that are more commonly used for accommodating guests and are a great way to meet fellow travellers along the journey.

There’s also the option of an arranged dinner with a Dungan family – a group of Muslim people of Chinese origin who have settled in Kyrgyzstan – and are famous for their rich, delicious cuisine. Talking about food... 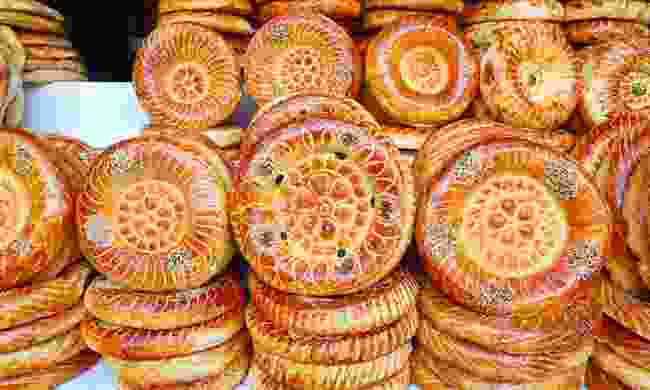 Flat cakes being sold at a market in Bishkek (Dreamstime)

With the majority of the population working in agriculture and livestock farming, it comes as no surprise that most of Kyrgyzstan dishes are meat-based – vegetarians be warned!

A serving of plov (pilau rice with vegetables and meat) washed down with kumis (horse milk) makes for a hearty meal after an active trek or long day of exploring. While other must-try dishes include manti (beef, potato and onion-filled dumpling) and shashlik (skewered and grilled meat).

Red meats including horse and beef are widely consumed, but chicken and fish make an appearance on the menu in large cities and near the lakes. While navigating the maze of stalls at Bishkek's market, fill up on savoury flat cakes (they taste more like bread) that have been freshly baked in clay ovens. 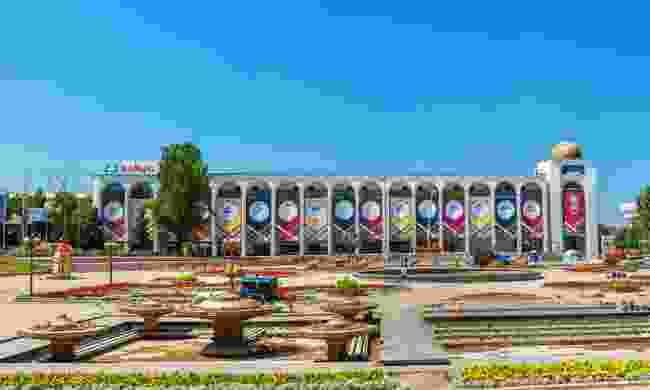 The few travellers that visit Kyrgyzstan do so to rejuvenate in its incredible outdoors and experience centuries-old nomadic traditions. But those who use the capital as a simple fly-in-fly-out gateway would be missing out on historic monuments, Russian vodka bars and abandoned Soviet buildings that make Bishkek worth hanging around to explore.

At the spiritual heart of Bishkek is Victory Square, which was built in time for the 40th anniversary to honour the victory over Nazi Germany. An eternal flame beckons at the centre of a red granite yurt-inspired structure and is guarded by the National Guard of Kyrgyzstan.

A short cross over the road takes you to an abandoned casino that – although is not publicly open to visitors – can still be accessed for those daring to explore. Other highlights across the city include Ala-Too Square, where Bishkek’s Soviet past can be recalled in the State History Museum, as well as the maze of market gems at Osh Bazaar.

Bishkek’s grid system makes it reasonably easy to navigate through the city by foot, although taxi is the most common form of transport. Travellers should always negotiate a price with drivers before getting in, as most taxis run without a meter, leaving the unwanted possibility of being overcharged.

7: Trek in the mountains 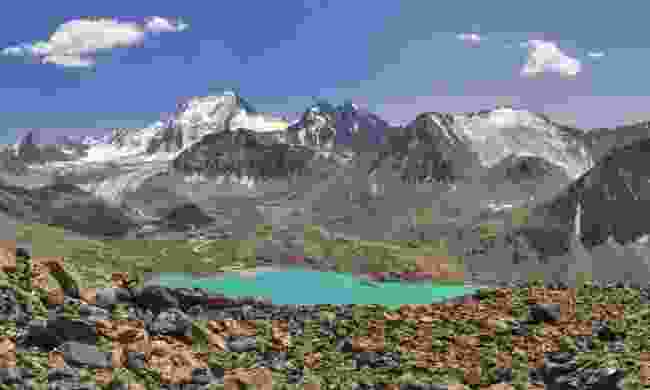 Nothing compares to walking over a steep-sided mountain pass, only to reveal teal-tinted lakes glistening back in reward. For those seeking captivating natural landscapes, look no further than the steppe of Central Asia.

With 90% of Kyrgyzstan blanketed in mountains, the east side of the country is an obvious choice for any outdoor explorer looking for a serious hike or a simple stroll at the base of the Tian Shan mountain range. Despite its mighty 7,134m altitude, Lenin Peak is one of the most accessible mountains for its height with only a guide and a good level of fitness needed. A trek to its base camp (3,600m) still captivates the sheer power of the peak from lower levels, offering good alternative for those after a less strenuous trek.

As with horse-based activities, treks can be arranged with English-speaking guides to tour this untouched paradise for outdoor lovers.