The 8 essentials for your Mongol Rally checklist

Each year, hundreds of teams complete the Mongol Rally, a challenge that journeys 10,000 miles across Europe and Asia. But what does one pack and prepare for on such an epic adventure? Mongol Rally veteran James Higgins offers some advice

The Mongol Rally was dreamt up and first attempted in 2004 by six teams, and only four completed the challenge. Since then the motoring expedition, organised by The Adventurists, has grown to include hundreds of teams bidding to cross one third of the planet; from the UK to Mongolia.

The concept is as simple as it is absurd; take a car with a maximum engine size of 1.0 litre (or a 125cc motorbike), find your own way to Mongolia devoid of any support, and raise as much money for charity as possible. With 2016’s edition set to disembark the UK on July 16th, preparations for some will be well under way, but for others, mere notes on the back of the envelopes. As a veteran of the 2012 Mongol Rally, I’ve put together a small check-list to help out this year’s participants.

Beyond deciding on your teammates, those who you’re prepared to learn about to unimaginable levels of intimacy, selecting your car or motorbike is the biggest decision you’ll make in preparing for this expedition. With the only restriction being engine size, you can let your imagination do the rest. 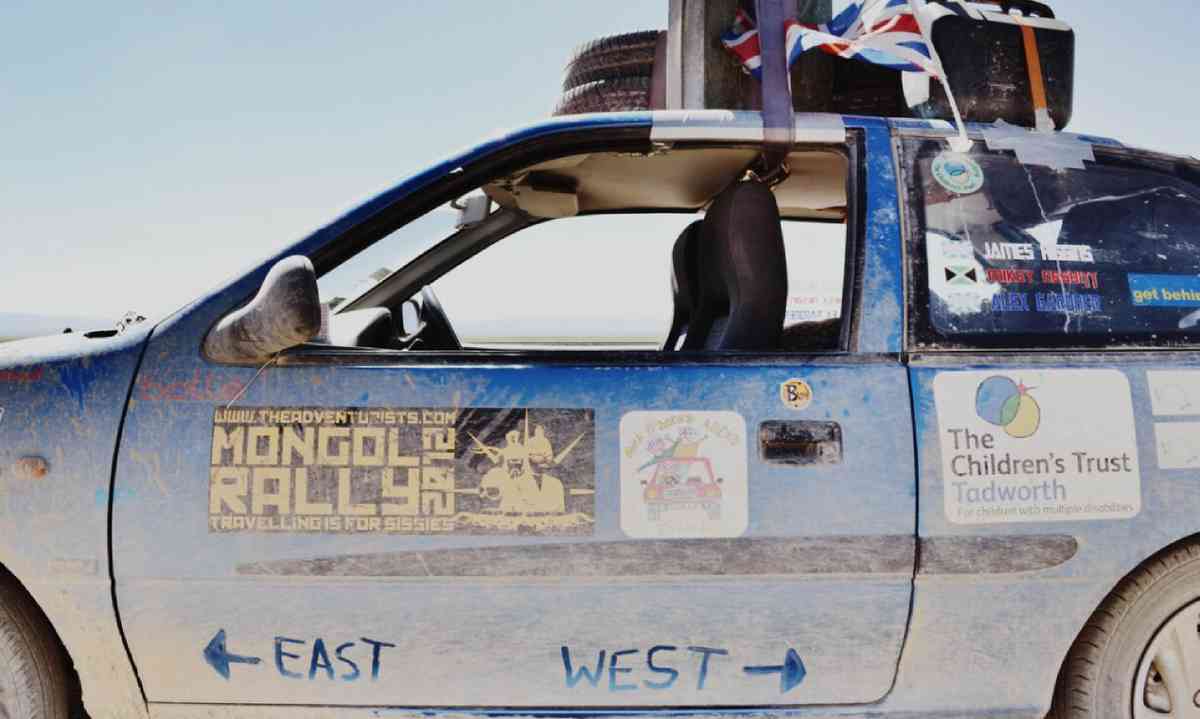 
Our £650, 2002 Suzuki Swift made it to Mongolia with most essential parts still attached. Although we may have ridden our luck for six weeks, a car of a similar age and reliable Japanese build quality could certainly help you focus on other pressing issues, like whose turn it is to sweet-talk the Kazakh police officer flagging you down up ahead.

There’s more to The Mongol Rally than the challenge of fighting off curious yaks with a fork and tent pole. It’s a wonderful opportunity to give something back to the world that you’ll be driving across. The Adventurists require you to raise £1,000 for charity as part of your preparation – £500 for their official charity Cool Earth, and £500 towards a charity of your choice. One of the kids at our chosen charity The Children’s Trust designed our team logo for us, and thinking about them at our toughest moments certainly helped keep spirits high.

Everyone you meet from now until the start line will be fascinated about your adventure, so take this opportunity to ask for donations, however big. £1,000 isn’t much once you’ve harangued all your friends and family, so aim higher. It’s a great opportunity to give some legitimacy to your summer of high jinks.

It’s not impossible to do The Rally for free. In 2012 some of our compatriots had companies write healthy cheques in return for photos and videos of rally cars plastered with their logos bouncing around the Altai Mountains, or Uzbek desert. Negotiating these terms, however, takes persistence and dedication. Businesses aren’t going to give you money without good reason, so look for angles which may relate to their fields, and remind them of the fact this is not a holiday but an expedition of epic proportions.

If you’re finding money hard to come by, speak to local businesses who may be happy to give you useful equipment – camping shops or mechanics for example. In exchange for a couple of Instagram tags, you might be able to save a few hundred pounds here – enough to compensate at least ten Russian policemen.

There’s a start line, a finish line, and not much else in between. For me this is the Rally’s finest quality. In the few days following the UK launch there are organised festive pit stops in Europe (Heidelberg, Budapest, and Romania), but from here on out the rest is dictated solely by your time, budget, and bravery. The Adventurists are not the hand-holding type, and leaving each team to fend for themselves in whatever remote corner of Central Asia they deem appropriate to drive through is a fresh, liberating experience. 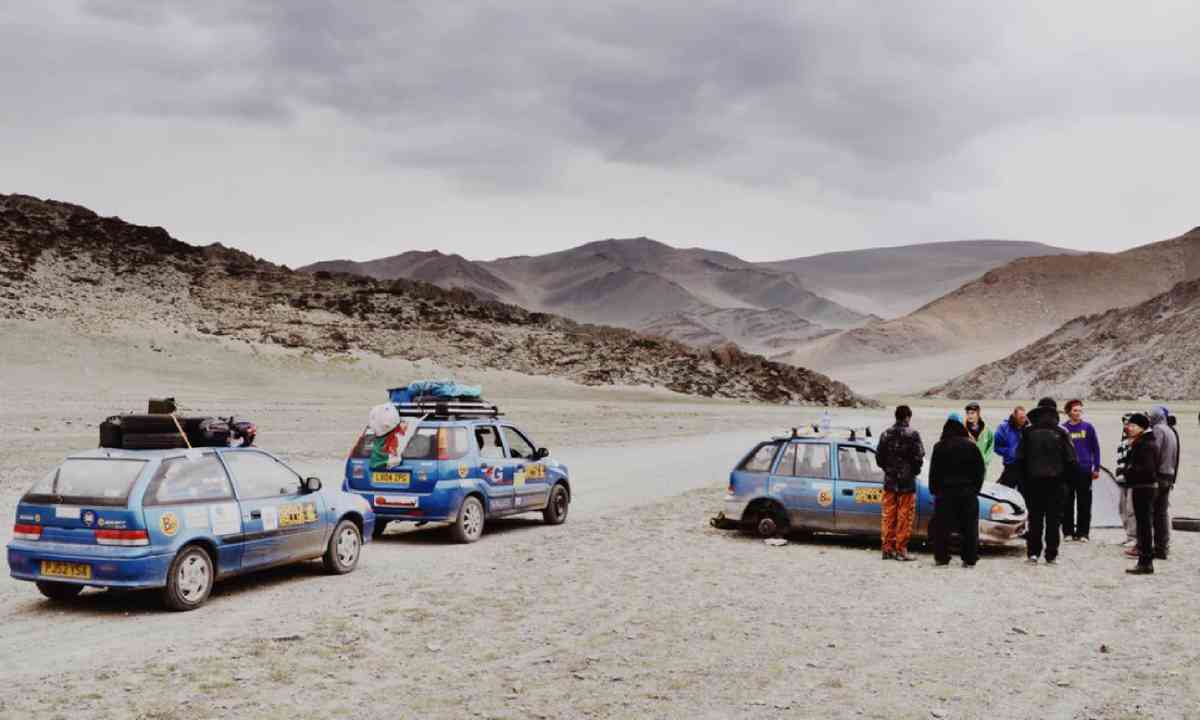 Briefly glance at a map, calculate how much time you have and how many visas you can afford, and start chasing the rising sun. Popular routes include jaunts through Iranian villages, negotiating with cargo ships to take you across the Caspian Sea, staring in awe at the bizarre dictatorship of Turkmenistan, or dodging camels in Kazakhstan. If you get lost, just wait until the evening and drive in the opposite direction to the setting sun, something which we found useful on more than one occasion.

As much as The Mongol Rally is about freedom of expression and liberation from your everyday constraints, it’s unfortunately also a test of your logistical capabilities. Without visas and permits, your liberty won’t stretch very far.

Nonetheless, The Visa Machine have joined forces with The Adventurists and can help each team through the application processes for every visa. Their excellent services come at a cost, but is discounted for Rally participants and makes the process so much simpler and less daunting. Be prepared to sacrifice your passport to them for up to four months during this process though.

Beyond Visas, there’s a long, inescapable list of paperwork to do. However, make a list, and just tick them off one-by-one. Vehicle insurance has to be bought for your European leg in advance, and then in Asia insurance can be bought for your car at each border post for between $20-$50 – often from a suspicious looking caravan containing far too many occupants. Don’t forget your motorway Vignettes either, for countries like the Czech Republic, or prepare yourself for some cat and mouse police interaction.

Some Central Asian countries require you to register at a local police station within two or three days of arriving – something which we neglected and provided us with a nervy exit in far eastern Kazakhstan, so check out the FCO website for local regulations like this.

Campbell Irvine supplied us with personal travel insurance, and are certainly recommended as they know the Rally procedure well. Your car should be MOT’d and taxed as per European Law, and if you’re driving through Iran or Pakistan you’ll need to look into getting a Carnet de Passage en Douane.

An International Driving Permit is required too, although we were never asked for it. Lastly, you’ll need your original vehicle V5 Registration document – complete with the name of someone who is actually in the car. This is vital – no amount of crossing palms with silver can help you if you loser or don’t have your original V5.

Spare wheels and tyres, jerry cans for fuel, tents, sleeping bags, cooking equipment, arno-straps, duct-tape, tow rope, and a pillow. That’s the basics covered, now time to attach the bath tub, cover the car in white fur, or find a place for the full wardrobe of tweed. Every year cars roll up to the start line decorated with a bizarre collection of items, and you’re encouraged to compete with the best of them. OK, so you’ll probably get more use out of a full tool kit, but you can borrow that from a passing Mongolian. Doing something outrageous will build a profile for you and your charities, and raise smiles for ten thousand miles. 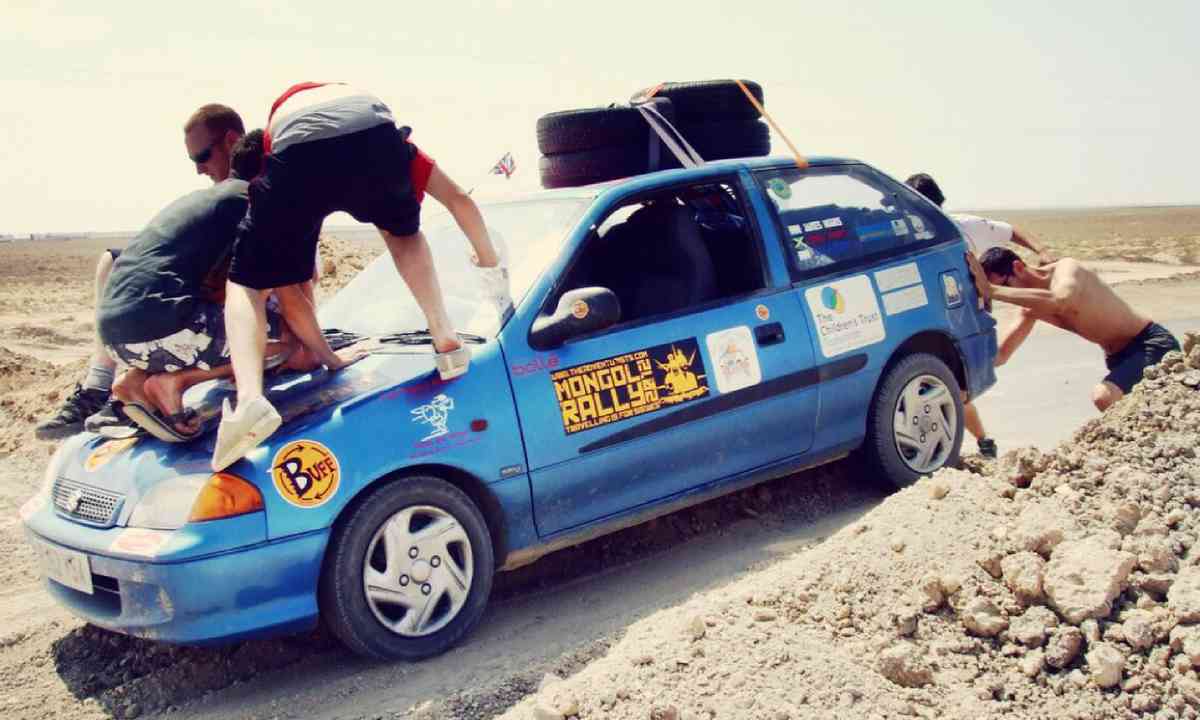 Beyond the basics and the extreme, we got most use from a big bottle of Tabasco, the complete US Office on hard-drive, twenty small bottles of vodka to help win favours in far-away places, and a ball of dollar bills for persuading those in authority we definitely weren’t speeding.

The Rally has changed recently, with the finish line having moved to the Russian town of Ulan Ude, on Mongolia’s northern border. After crossing the Mongolian steppe, stopping long enough in Ulaanbaatar to regret a few vodka-fuelled decisions, it’s a 400 mile amble north, back into the land of tarmac and civility. When you arrive, celebrate! After all, you have just crossed one third of the planet driving something ridiculous.

Once the dust settles on your Chinggis Gold hangovers, The Adventurists require you to take your car back into Europe, by either driving it along the sublime Russian roads, or having it transported by cargo train as you fly. If you yourself are just beginning, or too caught up in adventure to go home again, jump on the Trans-Siberian Railway and continue further east, as I did, into China and beyond.