The art of buying tikis

Wander Woman, Marie Javins, picks up a tiki on a Pacific Island where they don't care one way or the other about tourists

Shirtless, tattooed men in traditional dress pounded on drums while dancers walked, shimmied, or hakkaed onto the grassy field on the edge of Taiohae. I stood under some trees with 35 other passengers from the ship I was travelling on here in the Marquesas.

"They are not prepared for tourists," groused the woman who had the berth below me in the ship's dorm, an expat currently living in New Caledonia. "They should have this set up for tourists, but they are only doing the dancing for themselves, to show off to other islands. This whole thing is for locals, not for tourists."

"That is why I'm here," I thought, as I slowly edged away from her. You can't seek out the holy grail of non-beaten-paths, a small Marquesan island community in the middle of the Pacific Ocean, and then complain it's not touristy enough.

I slipped away to snack on walnuts I'd bought weeks ago at the Auckland airport supermarket, and sipped some water. I ran into a German couple who had acquired two coconut halves from a snack stall, which they dutifully attacked with my titanium spork. They made some progress but in time, gave up on the second half.

We three stayed in the shade for a while, then I wandered off to get closer to the dancing. A woman bystander from Tahiti explained to me what was going on. "Now that's the Catholic priest doing a prayer. Now they will sing hymns. Now there will be speeches."

At the mention of speeches, a low groan went over the crowd. Half the audience left, so I took their cue and headed out too, wandering downtown through the small handicrafts market.

Later, I'd go back to more dances, where by night, hundreds of Marquesans in yellows, reds, and greens would stomp, shake, and whirl about under the floodlights, to the thundering of a dozen tall drums.

The following morning, the English and German-speaking ship guests disembarked by barge at 8am for our excursion to the Iipona archeological site above Puamau, Hiva Oa. The French passengers were told to be ready for 8:30. At least Aranui had halved the swarms of people all descending into a small harbour at one time.

SUVs whooshed us up the hill to Iipona, where we were left in a mossy clearing in the woods. Five tikis surrounded us, including a frog-like woman tiki and also the largest tiki in Polynesia. The female tiki – Tiki Maki Taua Pepe – is said to represent a woman who died during childbirth, and was carved by her partner as a way to sooth her spirit, so she would protect the community rather than torment it. An animal is carved into the reddish base of the tiki.

"Some people say this is a llama, some people say dog. Me, I think it is a dog, because the dog is important to the Marquesan people," announced one of our English-language guides. I agreed with her – the dog looked like a llama, but what would a llama be doing here on Hiva Oa? Unless Thor Heyerdahl was right.

The tikis were in various states of completeness, with one being headless, but the largest tiki – Tiki Takaii – is missing his genitals and one arm, but is otherwise intact. He's said to represent a warrior chief. In The Happy Isles of Oceania, Paul Theroux described him as a "seven-foot monster, grimacing and clutching its belly," and describes the Iipona site as "a jumble of overgrown and scattered stones, and many carvings, some beheaded and castrated by souvenir hunters or missionaries." But this site had been restored in 1991, so it's no longer overgrown or scattered, but instead is one of the top archeological sites in French Polynesia.

The French passengers arrived and we English and German speakers scattered to walk or ride down the hill. Five minutes away was the tomb of the last chief of Puamau, who was the first of the valley's leaders to have converted to Christianity when the missionaries came. He asked to be buried in the Christian fashion, instead of having his body be placed in a cave or banyan tree, but, just in case the new god did not accept him, he also asked for tikis.

We walked back to the port, choosing one of two ways at the fork in the road.

"They both go to the same place," our guide Mila had told us. "But one goes through town and takes longer."

When I got to the fork in the road, I randomly chose, and ended up in town, walking past trees and undergrowth so green I took off my sunglasses to make sure the polarised lenses weren't fooling me. The road curved past banana trees and exotic, colourful flowers, eventually leading me to the post office, which was closed on Saturdays, and then finally down to the sea, where the Aranui waited.

On Sunday morning, one of the French women called my attention to the dorm's power strip, which was actually my power strip.

I'd bought the power strip in Papeete for five bucks at the local equivalent of a dollar store, and didn't plan on keeping it, but its resignation was five days early, and now eight of us would have to recharge our cameras and phones from a single outlet.

I shrugged, apologised for my feeble piece of electronics, and tossed it in the trash (then hilariously, a few minutes later, a different French women retrieved it to take to Reception to demand a new one – results TBD). I'd wondered why my camera battery had stopped charging early last night after our our afternoon excursion to Vaitahu, Tahuata.

Tahuata, just four kilometers away from Hiva Oa, is the smallest populated island in the Marquesas. The main village, which we had anchored next to, is called Vaitahu, and like most places we'd seen, it's a small village set against dramatic craggy hills carpeted in green foliage and trees. This shoreline was dramatic and rocky, and more importantly, this island featured a pig on a leash.

The pig belonged to the village of Vaitahu and she had produced two litters, so was quite a valuable commodity on the local scene. She's taken for a daily swim on a leash, which is how she happened to be walking on a leash right when us tourists were unleashed onto Vaitahu.

I tragically missed the pig-swimming part and didn't hear about it until later – I was in the town's church, listening to Manarii of the ship’s staff singing beautiful hymns while I thought about bone carvings.

I'd never had much need for a bone carving before, but a carver named Teiki Barsinas had set up a table here and he was selling intricate and unique bone carvings for between $30 and $200. My tiki-collecting friend from the ship had snapped up three items before I'd even seen the table. I'd fingered a piece and decided they were too expensive for me.

I checked out Teiki's table again on the way back to the ship. He had only a few pieces left – one stunning $200 tiki, some shark-tooth earrings, one carving of a whale, and one ivory-coloured tiki necklace that I'd been coveting earlier but at $80, I didn't think I could swing it.

"Now you have to wait three weeks to sell these," I joked with the carver. The ship comes by this town once every three weeks or so.

"True, so these are now on sale," he said via an interpreter, who was also the guest lecturer on our ship.

"Oh, really?" I tried not to appear too interested. "And how much might this be?" I pointed to the tiki necklace I'd been looking at earlier.

"Sold," said my tiki friend, picking up the necklace.

"Hey, I want that," I said in faux-indignation.

"Oh, sorry!" He didn't really need another tiki. He just couldn't walk away from such an exquisite piece at such a low price.

And that is how I ended up with a bone tiki from Tahuata.

Now if only I had a power strip. 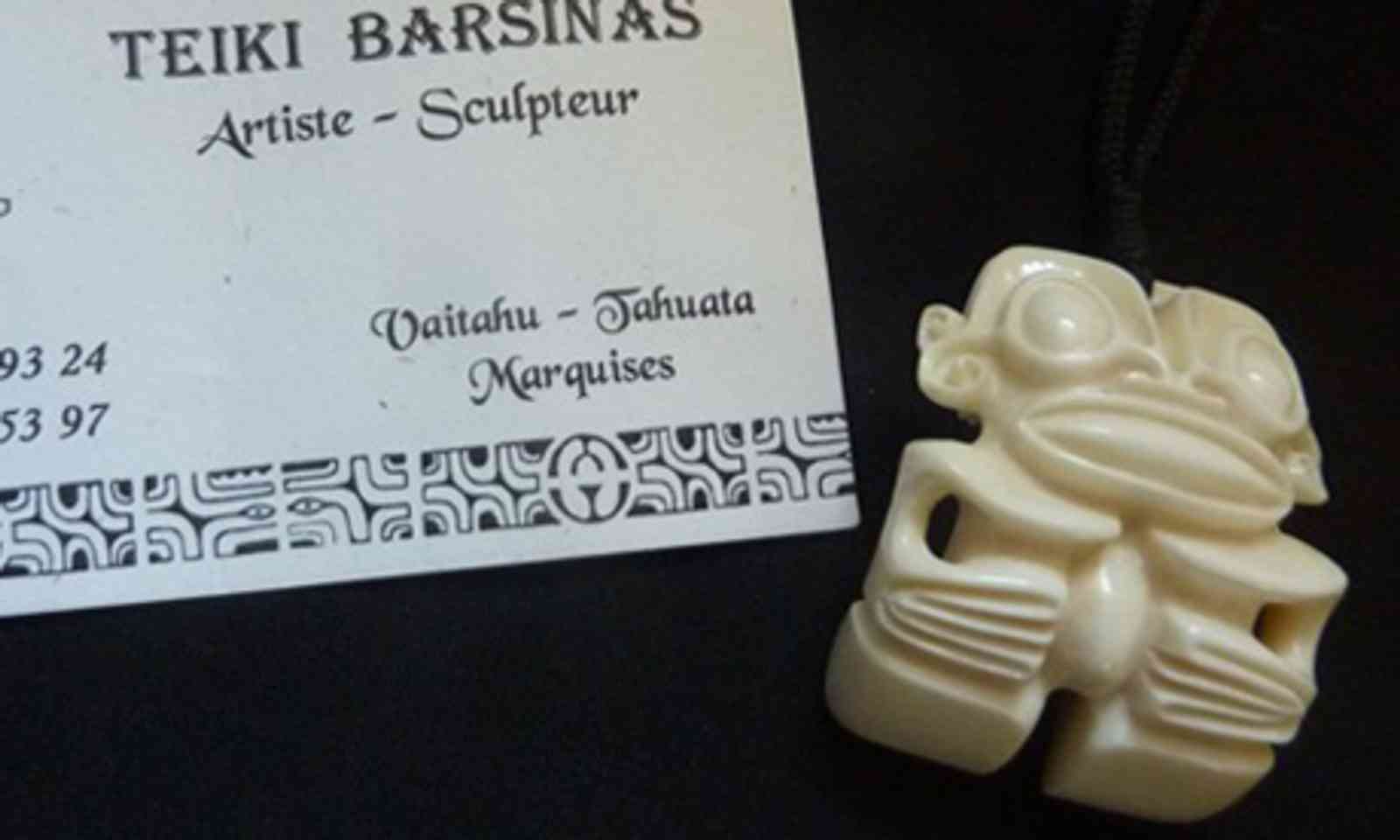