The art of 'slow': discovering the coastal secret of Paraty in southern Brazil

The historic coastal town of Paraty is tucked away between Brazil's two busiest cities, Rio and São Paulo, making it the perfect detour destination to slow down and enjoy the colourful coast

An empty hammock is always an invitation, and this one was more enticing than most. Slung low across the beach house decking, it was designed in the Brazilian style: a king-sized swathe of cream cotton fringed with decorative crochet. It swung idly in the Atlantic breeze, proffering a view of fishing boats, wheeling frigate birds and the turquoise waters of the Baia de Paraty, a glint in the afternoon sun.

With a sigh, I settled in. “A man in a hurry will be miserable in Brazil,” wrote Peter Fleming in his 1933 classic Brazilian Adventure. “I learnt the necessity of resignation.” Nearly a century later, this continent-sized country is still teaching impatient gringos valuable lessons about slowing down – and nowhere more so than Paraty.

Low streets, slow times Driving along the Costa Verde west of Rio, time seemed to decelerate with every rainforest-backed cove we passed, until we took a left turn and arrived at a town largely unaltered in a century.

Like many travellers, I’d come straight from several frenetic days in the big city, high on sightseeing, and my eyes were set on the even bigger metropolis of São Paulo. But around halfway between these two giants, I found myself in another era. 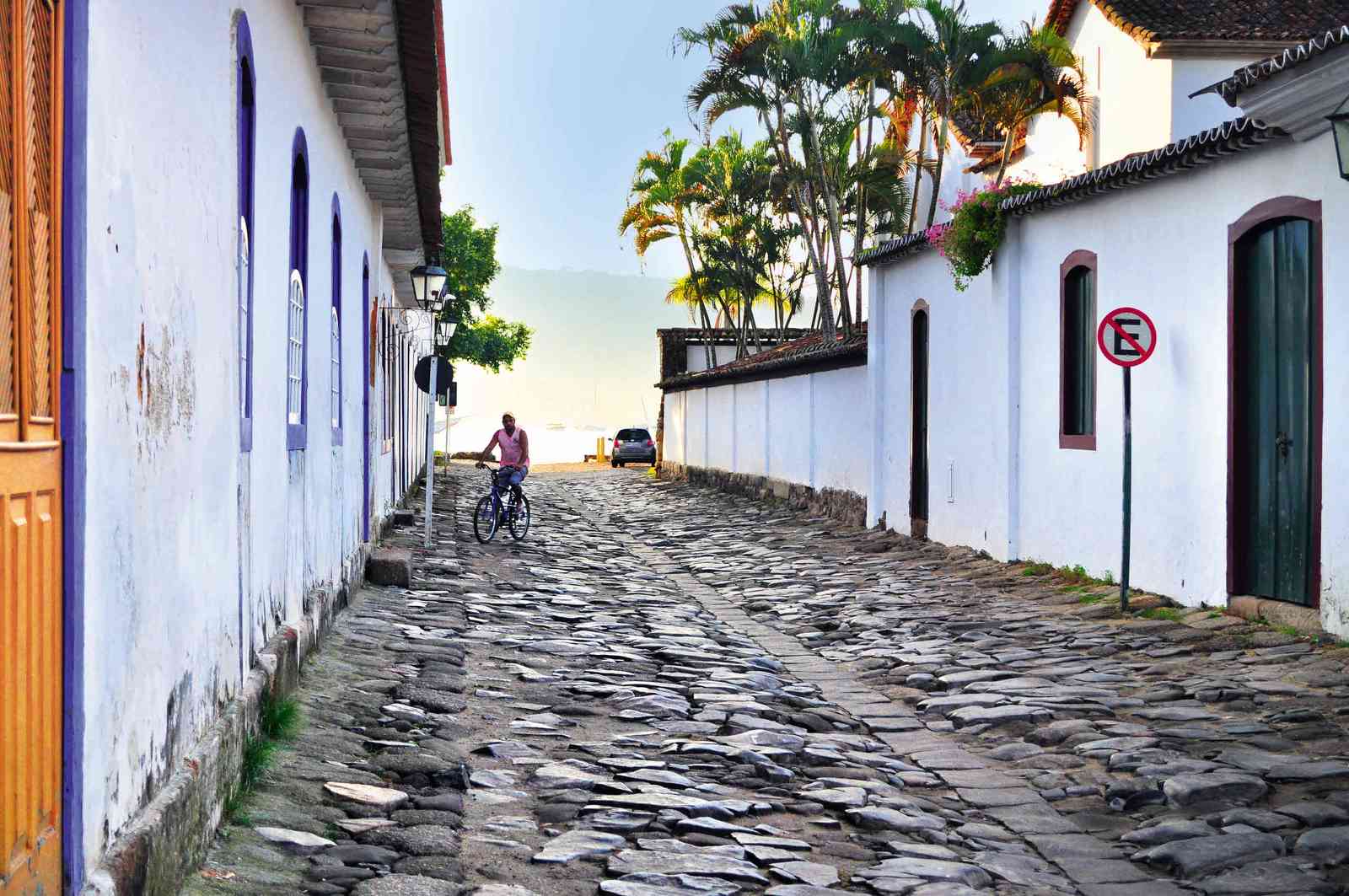 Paraty’s old town dates back, in parts, to the 17th century, when its sheltered harbour bustled with fleets of Portuguese caravels transporting gold back to Europe. Today, it’s a place to stroll along cobbled streets, peer into whitewashed churches, and watch hummingbirds flitting from one courtyard garden to another.

Listed by UNESCO, the town boasts perhaps the finest collection of Portuguese colonial buildings in the world. This wasn’t a simple stopover, I soon realised.

This was a linger-over. Local tour guide Harry Cowan had clearly decided the same thing, settling here from his native Argentina. He led me – slowly, of course – along Rua do Comercio towards the town square, explaining Paraty’s history, which is in large part the history of Brazil, too.

“There have been three eras, really – gold, coffee and tourism – and cachaça has been flowing all the way,” he said with a twinkle, referring to the sugar cane spirit that puts the fire into caipirinhas.

The gold era was the late 1600s, when huge quantities were carried down to Paraty from mines in Ouro Preto to the north. The early colonial town boomed, becoming Brazil’s main slaving port.

Ingeniously, it was built with its streets below sea level, so high tides washed away the debris – knee-high doorsteps protect Paraty’s homes from regular flooding to this day. And there were other architectural quirks, too: Harry pointed out the wonky red roof tiles that capped every house.

“They used to be made by wrapping the clay round the thigh of a slave girl. The technique even led to an unusual Brazilian expression – feito nas coxas (‘made on the thigh’), meaning something that was crude but effective.”

After the gold came the 19th-century coffee rush, as the town exported beans to Europe’s chattering classes, while dozens of distilleries sprung up to keep the African workforce hooked on cachaça.

But when slavery was finally abolished in 1888 – Brazil was the last Western nation to do so – Paraty’s economy and population crashed. By the 20th century, it was a ghost town, home only to “a few crazy moonshine distillers and some fishermen, and that’s it.” Only in the last few decades has money – from Brazilian second home-owners and travellers – flowed back into Paraty. 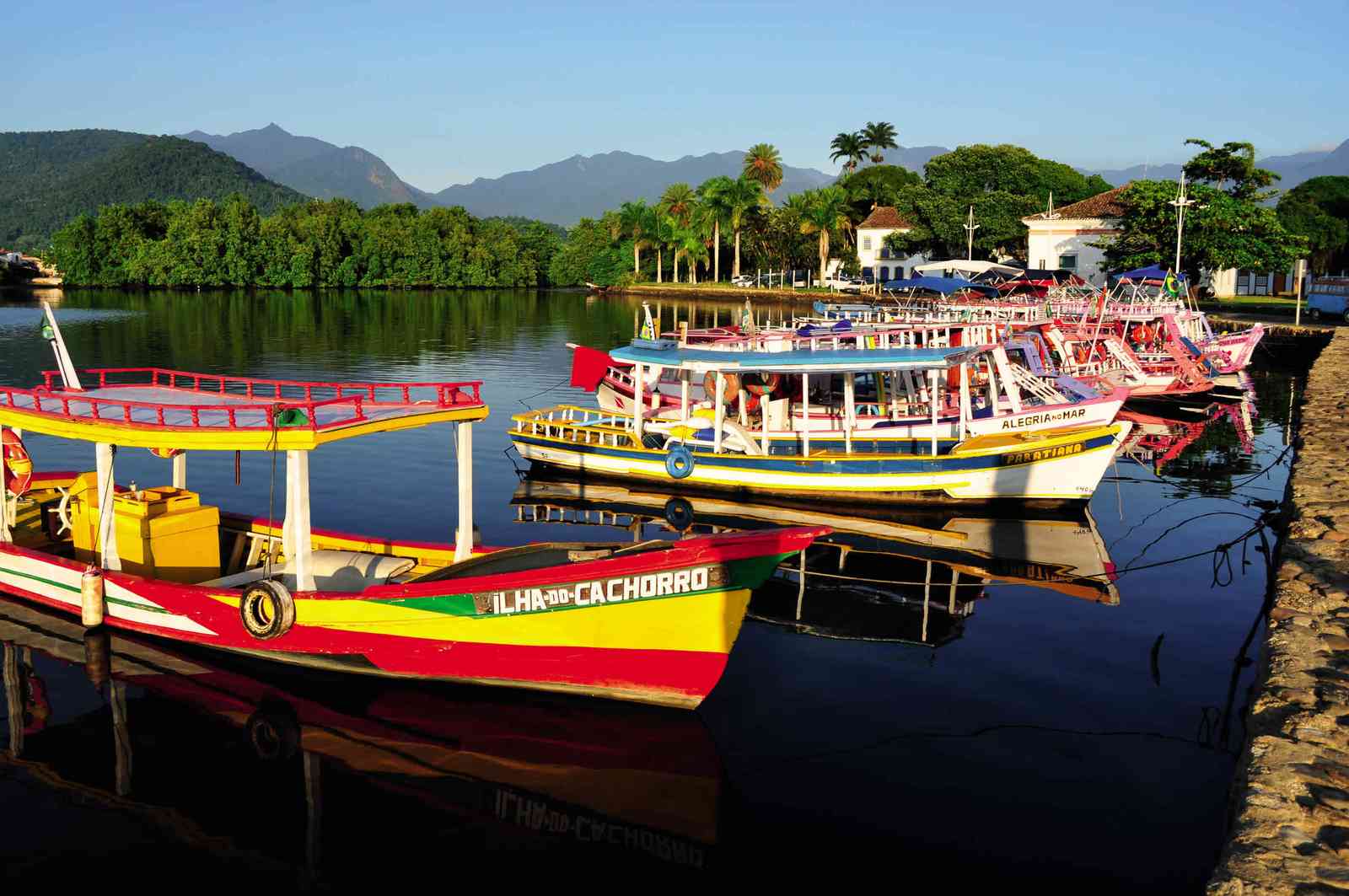 We’d arrived at the harbour now, where rows of zanily coloured boats nuzzled the jetty and vultures patrolled the foreshore. In front of us were the scattered islands and remote promontories of the Bay of Paraty – of which more to come – while behind us lay cloud-wreathed hills, part of the Mata Atlantica rainforest that once covered nearly a fifth of Brazil.

The Mata Atlantica is another reason people tend to struggle to tear themselves away from Paraty. Though hacked back to a fraction of its former grandeur, it’s extraordinarily biodiverse – a global hotspot for endemics – and right in Paraty’s backyard. The old gold trail still weaves through it (a multi-day hike for the energetic), but Harry, ever mindful of overexertion, suggested an easier taster: an amble to a waterfall. So the next morning we took a short drive, parked by the roadside, and slipped into the trees.

It wasn’t the primary forest that you find deeper in the hills, but it was enchanting nonetheless. Everywhere was a musty-sweet tangle of ferns, cacti and lianas, speckled by distant sunlight. Fantastically gnarled trunks sported vivid bromeliads, and bird-of-paradise heliconias drooped in our path.

“This would once have been a sugar-cane plantation,” observed Harry. Clearly, nature hadn’t got the message about slowing down: it had reclaimed its territory with rapacious speed. The super-fertility of the Mata Atlantica is fed by the humid air from the ocean, and that was where I hankered to be now: out there.

If rainforest hikes are part of Paraty’s appeal, its fjord-like coastline and countless islands are the other lure. Schooners do a brisk business in day trips, but there are also a handful of places along the Ponta Grossa peninsula where you can stay longer and I headed for one.

Stepping onto the jetty at Casa Cairuçu that afternoon, I felt a delicious and rare sensation: roadlessness. A 20-minute zip across the bay had brought me from Paraty’s old town to this wooden bungalow hiding on the jungled coast. Along the promontory, a handful of other houses poked out from the greenery – a fisherman’s hut, the abandoned villa of a 1950s movie star – but only a long, winding footpath or a boat connected us to anything. 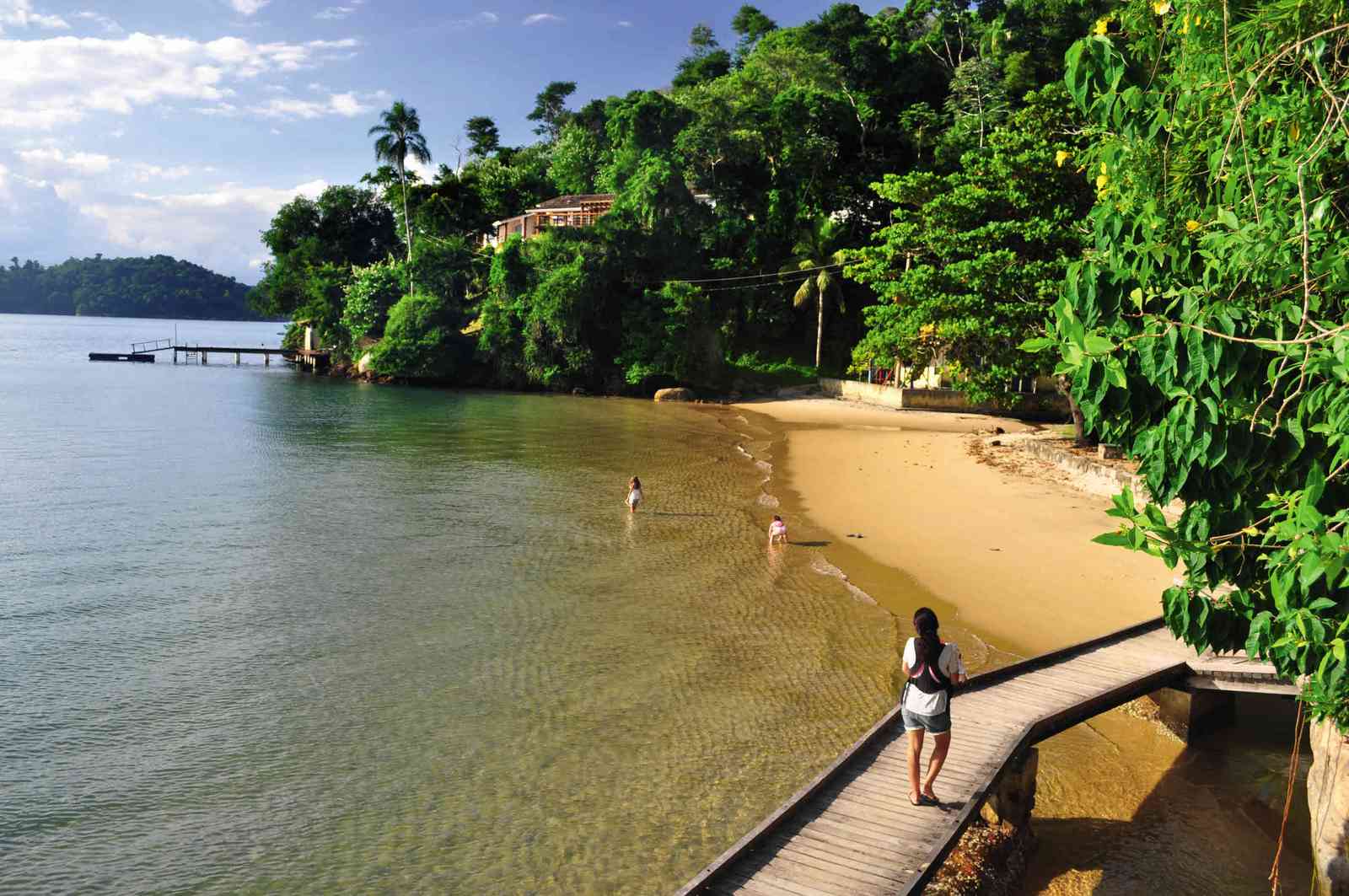 For anyone in a hurry, the next few days would have been miserable indeed. Being marooned on a little patch of land, a four-hour walk to anywhere, forces you to change priorities. So instead of plotting my next move, I found myself lying in the hammock on the Verandah, mesmerised by the small things. An egret perched on a boulder, gulping down a fish.

The geriatric bob of a turtle’s head in the shallows. The chirpy call of the bem-te-vi bird. A volley of parakeets. The ever-changing light on the bay: silver to gold to pink to blue to black. And alright, I did explore a bit. I took a boat along the peninsula, home to a caicara fishing community (descendents of the Portuguese and indigenous coastal settlers), and snorkelled with zebra fish by little Ilha Comprida.

We dropped anchor off the kind of beaches that – even if beaches aren’t your thing – you’d have to grudgingly applaud. I walked the footpath to Maria Della Costa’s house, the late movie star’s abode now eerily strangled by foliage, its sundeck sprouting palms.

But Ponta Grossa’s best secret was only revealed on my final night. After sunset and supper, I padded down to the house’s jetty and dived in for a swim. A strange, magical thing happened in the darkness: my arms and legs trailed stars.

With every sweep or kick through the water, a thousand points of light flashed and died. It was a phenomenon I’d often heard about but never experienced bioluminescence created by millions of tiny organisms in the sea.

It was as unexpected as it was wonderful, and I wouldn’t have been it if I’d been ploughing ahead in my usual travelling mode. Paraty had pulled me into its sleepy embrace, and then given me a reward, as if to say “told you so”. I floated on my back in the glowing water for as long as I could – you can’t linger forever, after all – and then swam slowly back to the jetty.

The author travelled with Last Frontiers (lastfrontiers.com, 01296 653000) who specialise in tailor-made trips throughout Latin America.