Sleeping with Bob Marley's ghost - a unique pilgrimage to Jamaica

Hidden in the hills above Brown’s Town, St. Ann’s, the village of Nine Miles is a dusty hamlet as remote as it sounds. Its one main street winds past sloping plots of dasheen and yams.

When Bob Marley was born here in 1945, his mother was a 16-year-old peasant girl, with dark skin and deep roots in the area. His white father was employed as a surveyor of Crown Lands nearby. He was the short outcast son of a prominent Kingston family.

Captain Marley was past 60 when he rode into Nine Miles on a white horse and chatted up young Cedella, or 'Ciddy'. She bore a son, some months later, whom she christened Nesta Robert; she started raising her little half-caste boy here, and then after she brought him to Jamaica’s capital when he was twelve, he finished the job himself. 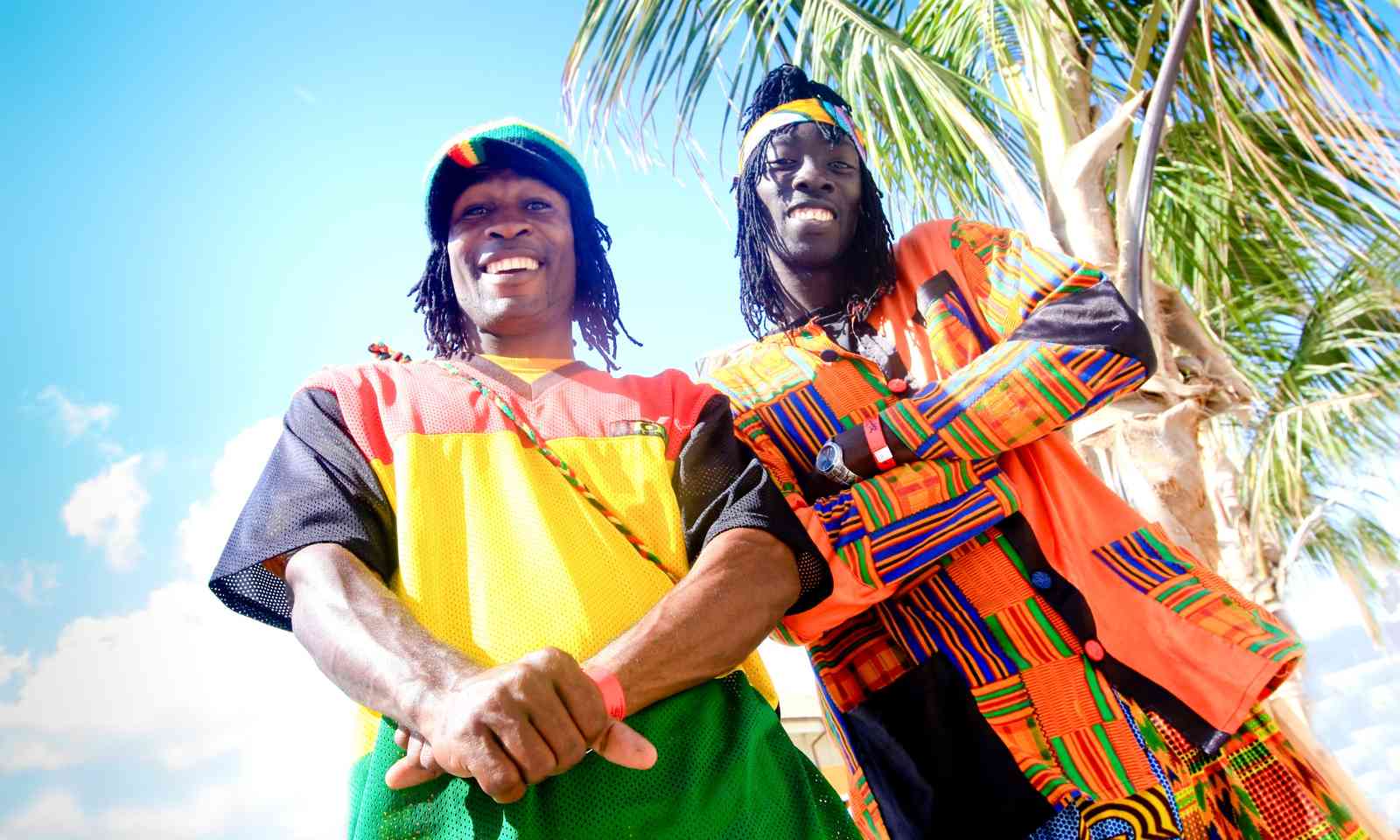 In Kingston’s streets in his teens, he earned the nickname Tuff Gong for his scrappy prowess as a fighter. By the time he died at just 36, from cancer, he’d become a musician so renowned in his homeland and beyond that every mile of the winding road to Nine Miles was lined with mourners when his hearse passed.

That route is still traversed by old lorries carry­ing bananas and sugarcane and by shared 'roto-taxis' carrying kerchiefed country women, stuffed five across in rattly Toyotas’ backseats, heading home from town with their shopping.

Now, though, these vehicles have been joined by white-panelled tourist buses that bump up the rough road from Ocho Rios and disgorge their sunburned cargo within the high-walled gates of the compound that’s been built up around Marley’s refurbished birth shack and the rather grander mausoleum alongside, where he’s interred. Outside the walls, affected Rastas mill about, trying to sell visitors bootleg CDs and “Bob Marley weed.” Few of their prey expe­rience much of Bob’s world beyond the disembodied voices or hands that, reaching through slats in the wall, proffer those CDs and herb. The tourists, put off by poverty, prefer patronising the overpriced gift shop.

The gift shop is strategically located between the parking lot and the bar, with wares including stuffed monkeys with dreads, Rasta-coloured socks, and shelves full of all you might need: rolling papers, all kinds; a metal 'herb grinder'; a six-inch 'Marley’s mood' lighter to craft a spliff to puff while kicking about the hacky-sack affixed with Bob’s face, which is also for sale here.

Nine Miles can be a gnarly scene. Until, that is, you move beyond the several square feet of transactional nastiness around its one tourist trap to stroll through a place that exudes the mellow air of little mountain towns everywhere.

I had the fortune to arrive with a man whose ties to the Marley family were close: Ralph was a lawyer, better known to is friends, on account of his love for pot, as Ganja Man. He led the fight to win Bob’s mother, and her other sons, their piece of his posthumous pie. (Marley famously died without a will.)

I listened to Ganja Man ring up 'Bob’s brother Richard', one of Ciddy’s other sons who lived in Miami, to see if we might crash that night in the family’s home by the mausoleum. “It’s cool,” Ganja Man said, before lowering his window to greet one affable local after another, identifying them all as "Bob’s cousin.” 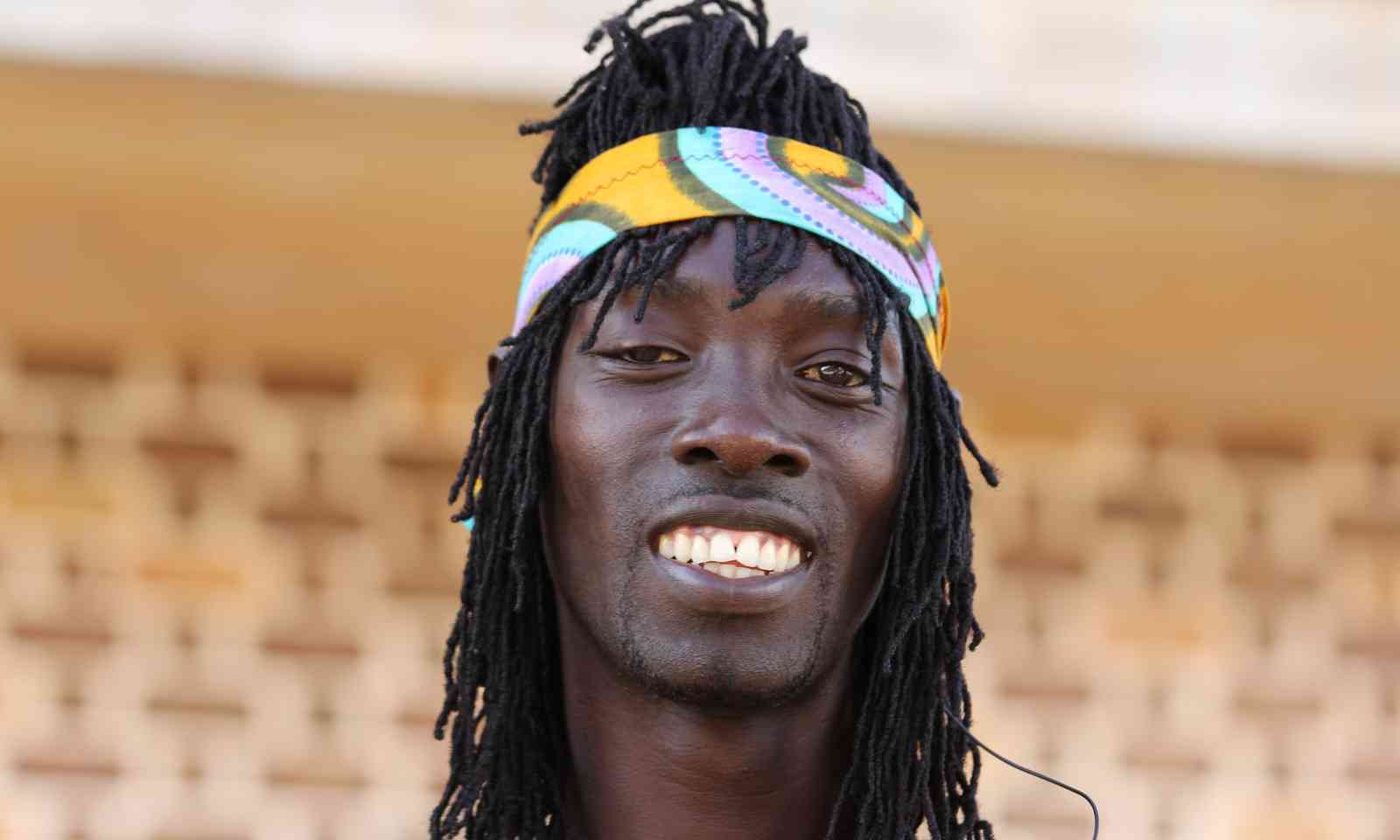 I stepped from the car and walked down a lane lined with the familiar features of country life here. Outside a little shop called Yah Suh Nice Store, a cheery higgler was selling “gunga rice and peas” in Sty­rofoam trays. Down further, a hand-painted sign outside a crooked wooden house, just below the Marley mausoleum, adver­tised “Mount Zion Apostolic Ministries Incorporated.”

Nearby, a rough concrete retaining wall was painted with a fresh mural of a sort one sees all over Jamaica, showing a round-faced local potentate who’d recently passed. “In Memory of Karl ‘Busta’ Brown,” it said ”Our Father, Our Hero, Our Strength.” The dark bar next door, I learned from a young woman standing outside, had until recently been “Busta Brown’s place.”

The young woman had big eyes set in a wide face over a button nose, and bore more than a passing resemblance to the photos of a young Ciddy, Bob’s mother, that hangs in her mausoleum. (She died here in 2008, after returning from Florida and opening a school in her old hometown.) Were they related? To some degree, probably. Ciddy’s mother, Omeriah Malcolm, Bob’s maternal granddad and a local grandee of his day, fathered dozens of kids.

The kinship ties that bind this bit of St. Ann’s to itself, with Omeriah’s offspring still hoeing his lands, are hardly rare in rural Jamaica. What distinguishes Nine Miles, though, is that not a few of Marley’s darker cousins earn their living from his memory. This fact, it’s fair to say, doesn’t occur to most tourists who come here picturing their hero’s latte-coloured face.

But back at the compound, on old Omeriah’s land, which has been built up in Bob’s name, it is several of his cousins who work there as tour guides, and who prod visitors with their own theme song: “One love, one heart / Tip your tour guide, and feel alright.”

They lead visitors up the hill to show them the little shack where Bob was born. They point to a rock outside that may or may not have inspired his verse, in “Talkin’ Blues,” about how “rock stone was my pillow too.” They take their charges through the handsome marble chapel where Bob is buried, right next to the newer one where his mother is.

By day, this Temple Mount felt overrun. But that night, after the cruise shippers cleared out and the compound’s high gates were locked, I accompanied Ganja Man up the path to the mausoleum that he called “Zion” to a nodding night watchman called Chicken to “smoke with Bob.” 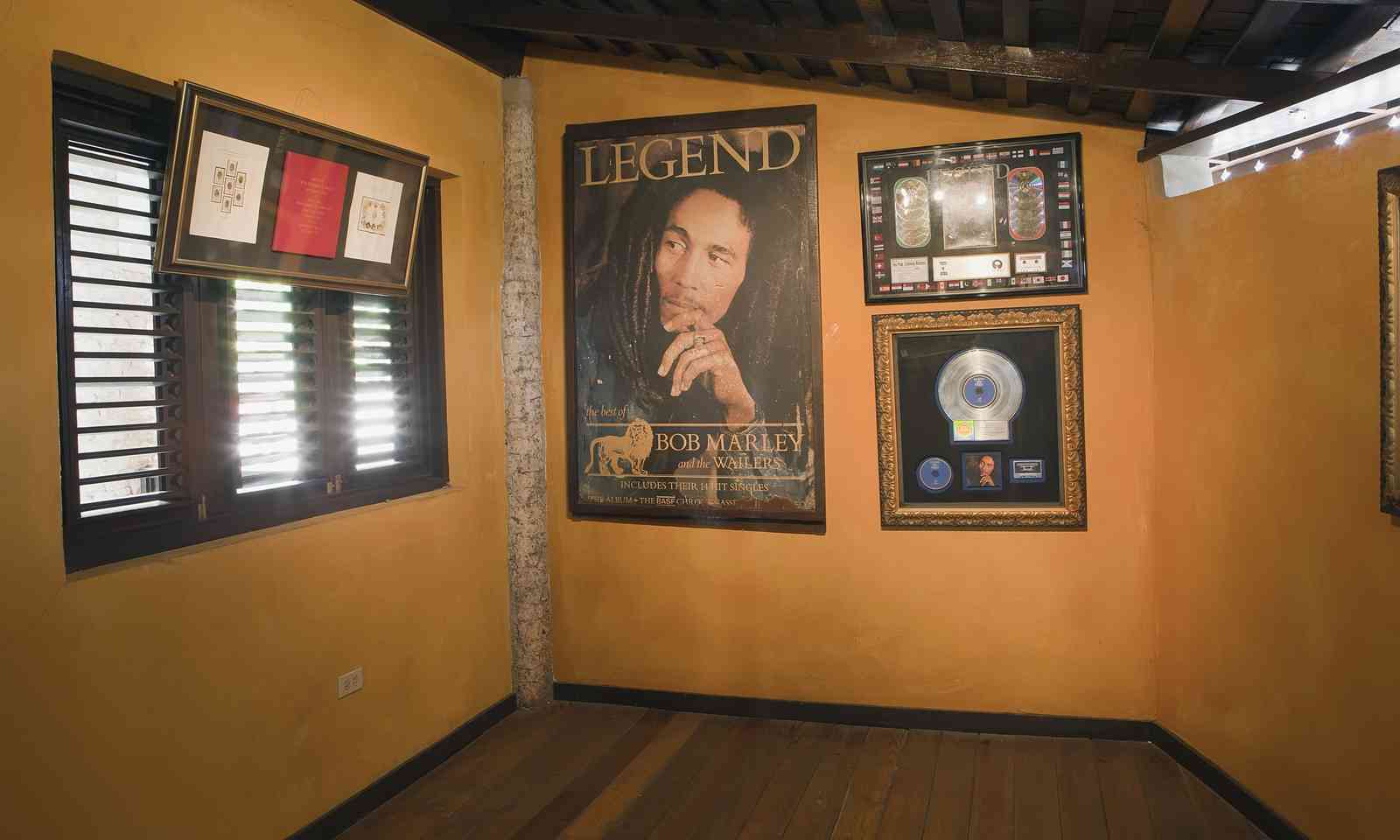 Inside the Bob Marley museum at Nine Miles (Dreamstime)

There in the chapel, arrayed around the tomb’s stone plinth, lay the offerings of pilgrims from the four corners: a charcoal drawing of Mal­colm X; a small Canadian flag on a wooden dowel; a book emblazoned with Marley’s face and the title, in what looked like Serbo-Croatian, “Boba Marlija.”

From the road below, the plaintive sounds of sing­ing people drifted up. The congregants of Zion Apostolic Ministries Incorporated were praising Jesus. Puffing his spliff, Ganja Man looked over. “You know they cut him out,” he said, through the haze. “Bongo Joe—he took Bob out; put him back again.”

There was only one thing, next morning, to do: find Bongo Joe. We found Bongo Joe sitting on the porch of a sturdy split-level ranch house on the edge of Brown’s Town. Out front, a few of his bredren were roasting bits of the breadfruit over a fire.

Bongo Joe waved 'hello'. He was a wiry little Rasta man with smiling eyes. His locks were tucked into a knitted tam. He showed me into a home whose rooms were furnished with a few mattresses on the floor, an old antique globe, and an old unplugged refrigerator being used, with its doors open and absent of 'current' to cool its shelves, for simple storage. 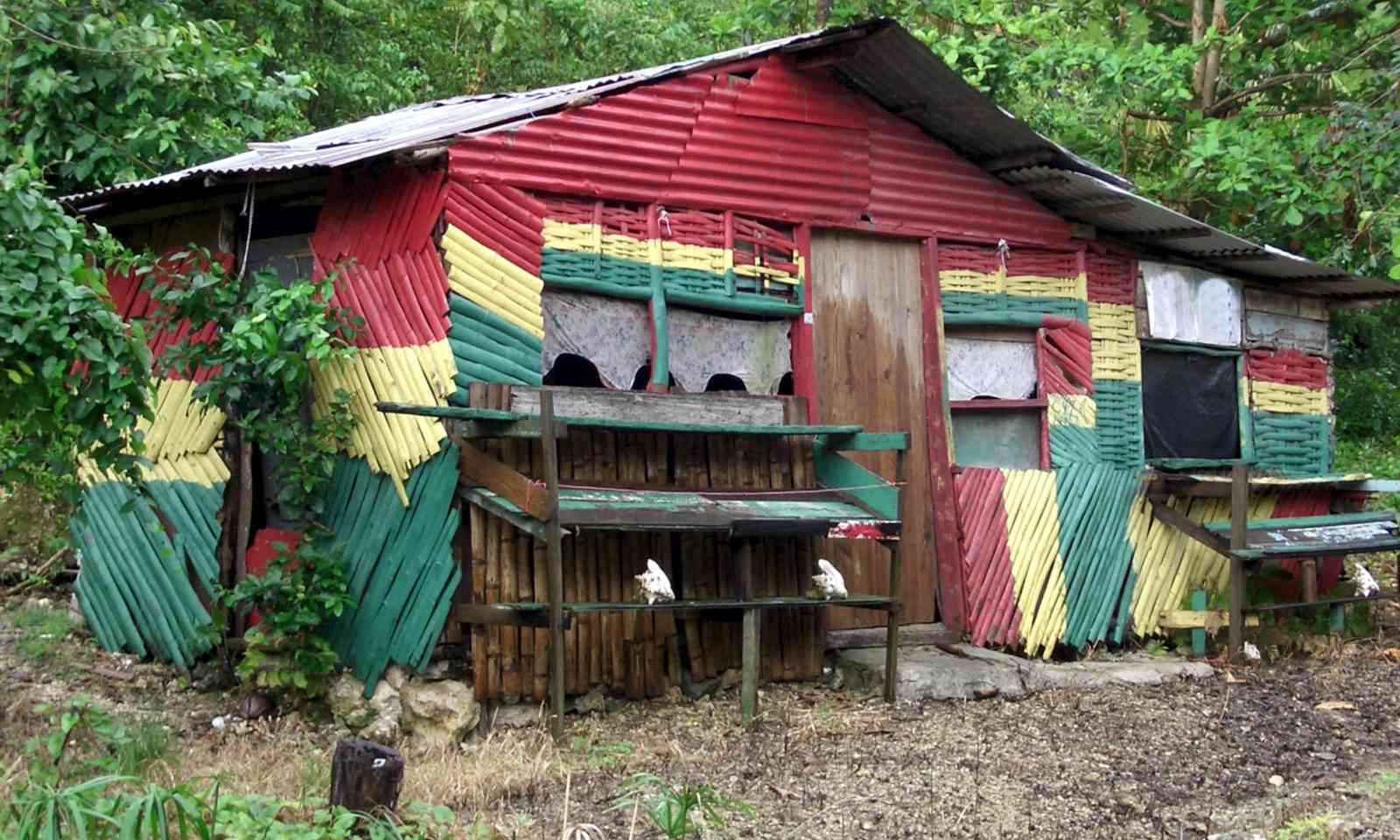 Rustic dwelling in the hills of Jamaica (Dreamstime)

“Give thanks.” Our host offered the traditional Rasta greeting. He bid me sit on a bag of fertiliser. I asked him his name. “My name Bongo.” He paused. “My other name – my Babylon name – it’s Gilbert Powell.” He chuckled gently, and then he told me his tale.

Born here in Brown’s Town, he had adopted Jah as lord in the late 1960s and taken his nom de Rasta around the same time he “met a lady from up in the hills.” The said lady was from Nine Miles. It was in renting a house there, from Bob Marley’s aunt, that he got to know the local kid who always made time, Bongo Joe said, to drive his Land Rover up from town and, tending to one of the family plots, to fill his jeep with “plenty punkin and yam.”

Bongo Joe was a trusted fellow Rasta in the rural homeplace where Marley returned, even after grow­ing world famous, “when him want to relax hisself.” The men became close and when the end came, Bongo Joe was there. The hearse that carried the Gong up from the capital, he said, had broken down around the town of Ewarton; Bob’s bredren, following in one of the departed’s trucks, slid his coffin from one carrier into the next.

They continued into St. Ann’s and, once they reached Nine Miles, slid the box contain­ing Bob’s battered body and his Gibson guitar out of the pickup’s bed and into his marble tomb, without remembering, some said later, to turn the coffin around again. No one knew for sure.

But the prospect that “Bob went in wrong way” set the stage for the secret drama in which Bongo Joe, who worked with the Marley family and served as a tour guide at Zion for years, played his crucial role. 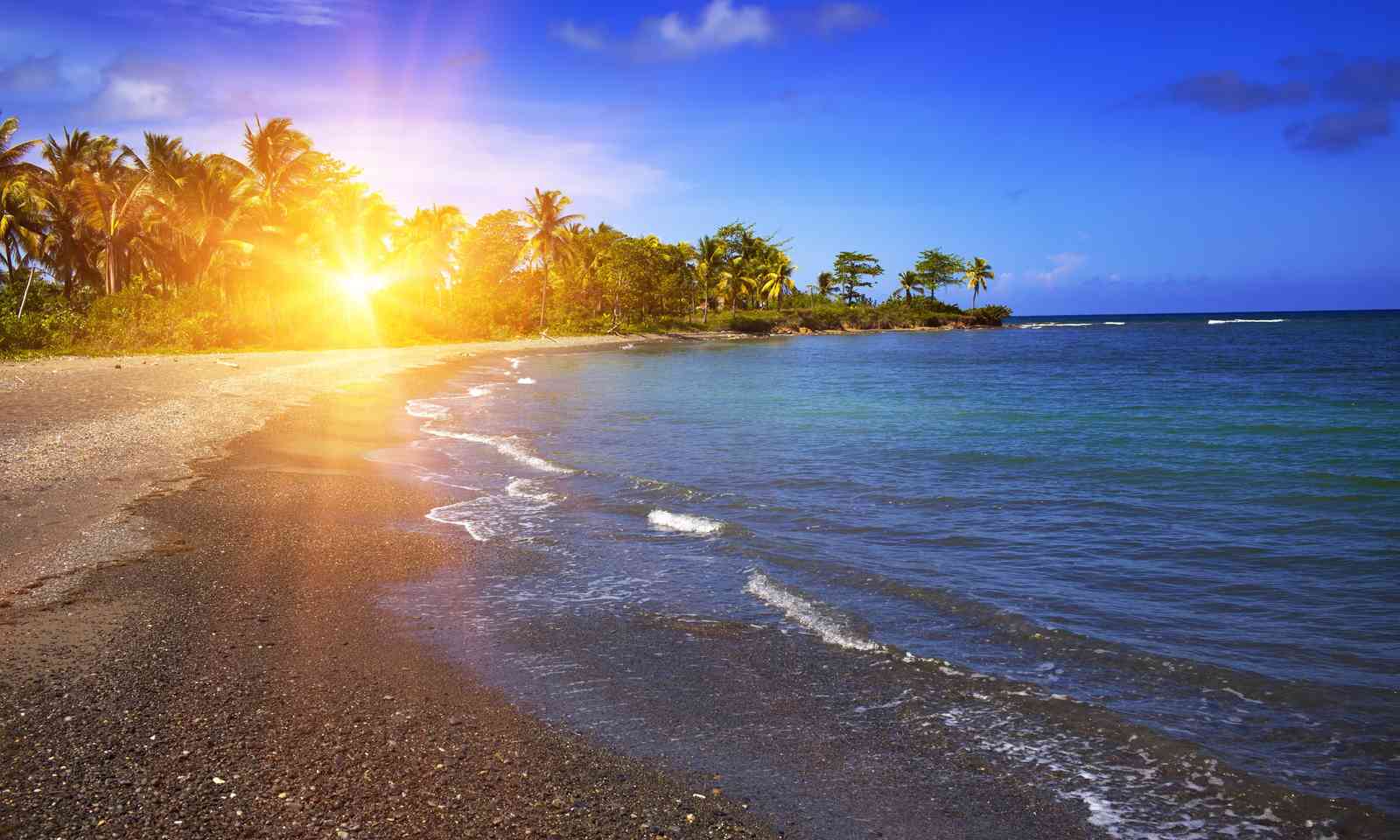 A deserted beach in Jamaica (Dreamstime)

“We always tell people,” he recalled, “that Bob Marley head face east, face the star.” The heads of the dead, in Jamaica, must face the ris­ing sun. Tombs on the island, no matter their context, are angled that way. It matters. “But we never sure,” Bongo continued. “And then Bob mother and him lawyer start having dreams. Having dreams that Bob not happy in him tomb.”

“They thought he was faced the wrong way?”

“Yeah mon. So, one day, Bob brother Richard, he say, "Bongo. Come up here.”" Up by the tomb, Bongo found Bob’s brother stand­ing with their mother and a robed priest from the Ethiopian Orthodox Church. “"We need to get in there," Richard say. "We need help to dig Bob out. We need to turn him round."

Bongo, there on his porch in Brown’s Town, lifted a pantomime hammer and chisel. “So I start to dig. Dig and dig and dig and dig. The whole of me face white up. Dust flying in me nose. I couldn’t leave it, cause they wanted me to do it. So I dig and dig.”

Back in Nine Miles that night, I walked up the Temple Mount to Bob’s tomb once more. The praiseful sounds of Zion Apostolic Min­istries floated up in the dark. I sat by the tomb’s western end, crouching by the little Canadian flag and a burning stick of incense. I moved aside a bit of the gauzy cloth hung over its end. I could see, through the haze, a wide seam of rough stone where someone had chiselled an opening and then, working in cement, covered it up again.

This extract was taken from Joshua Jelly-Schapiro’s latest travelogue, Island People (Canongate). You can order your copy on Amazon now.