Head to the East Devon and Dorset coast and you can discover 185 million years of the earth’s history. Welcome to Britain’s slice of Jurassic Park...

Just imagine going to the beach, wandering over the sand dunes and spying what appears to be a rock jutting out from the sand. Imagine taking a closer look, digging away more sand and discovering that the rock is much bigger, and imbedded more deeply, than you thought. Imagine pulling away yet more sand to find, to your delight, that it’s not a rock at all but a bone. And not just any bone – a dinosaur bone.

So it was for one Mary Anning who, in Lyme Regis, Dorset, in the early part of the 19th century, not only found an abundance of dinosaur and fish fossils, but also made the first discovery of an ichthyosaur skeleton and the first two skulls correctly identified as plesiosaur. It’s no wonder then that the stretch of England’s coast between Orcombe Point near Exmouth and Old Harry Rocks near Swanage became known as the Jurassic Coast. 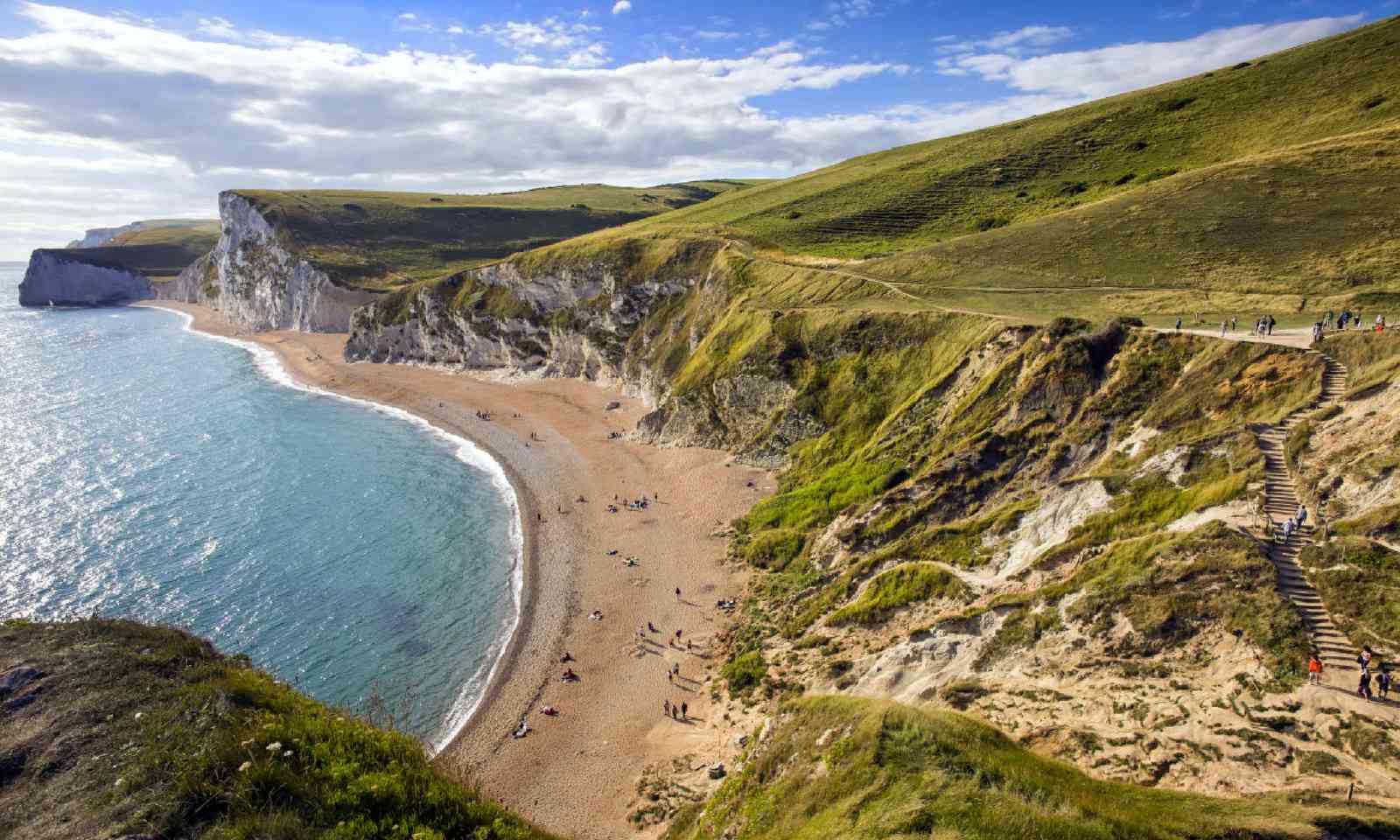 Designated a UNESCO World Heritage site and voted one of the Greatest Natural Wonders in Britain in 2005, this crumbling, fossil-rich coastline was created over 100 million years ago when massive earth movements pushed up and tilted ancient layers of rock, opening it up to erosion and thus exposing a glorious neopolitan-like trio of rock from the Triassic, Jurassic and Cretaceous periods.

All this can be seen today by wandering along the well-marked South West Coast Path National Trail – quite literally, a stroll through time. Stretching from East Devon to East Dorset for 153km, the Jurassic Coast offers more exploring possibilities than can be covered in one long weekend, but if time is tight one of the best places to base yourself is Lulworth Cove.

The cove here looks so perfectly round it could have been gouged by an ice cream scoop; actually it has been shaped by the waves, which erode the cove’s combination of clay and limestone at different rates. Its neighbouring landform, known as Lulworth Crumple (officially Stair Hole), is a great example of the area’s folded rock strata, as is the eroded archway of nearby Durdle Door.

Lulworth is also home to the Fossil Forest, the remains of a 145-million-year-old Jurassic swamp forest where dinosaurs once walked. Strolling along most sections of this coastline (and walking is by far the best way to explore it), you get glimpses into its geological and prehistoric past – but there are also opportunities to learn a little about its human heritage too.

There are tales of swashbuckling pirates around Osmington Mills. There are the residents of the ghost village of Tyneham, who were forced to give up their homes to the Army during the Second World War. And there is that aforementioned Victorian fossil hunter Mary Anning – who also happens to be the lady who inspired the classic tongue twister, ‘She sells seashells on the seashore’. Here, history whispers in your ear with every step. 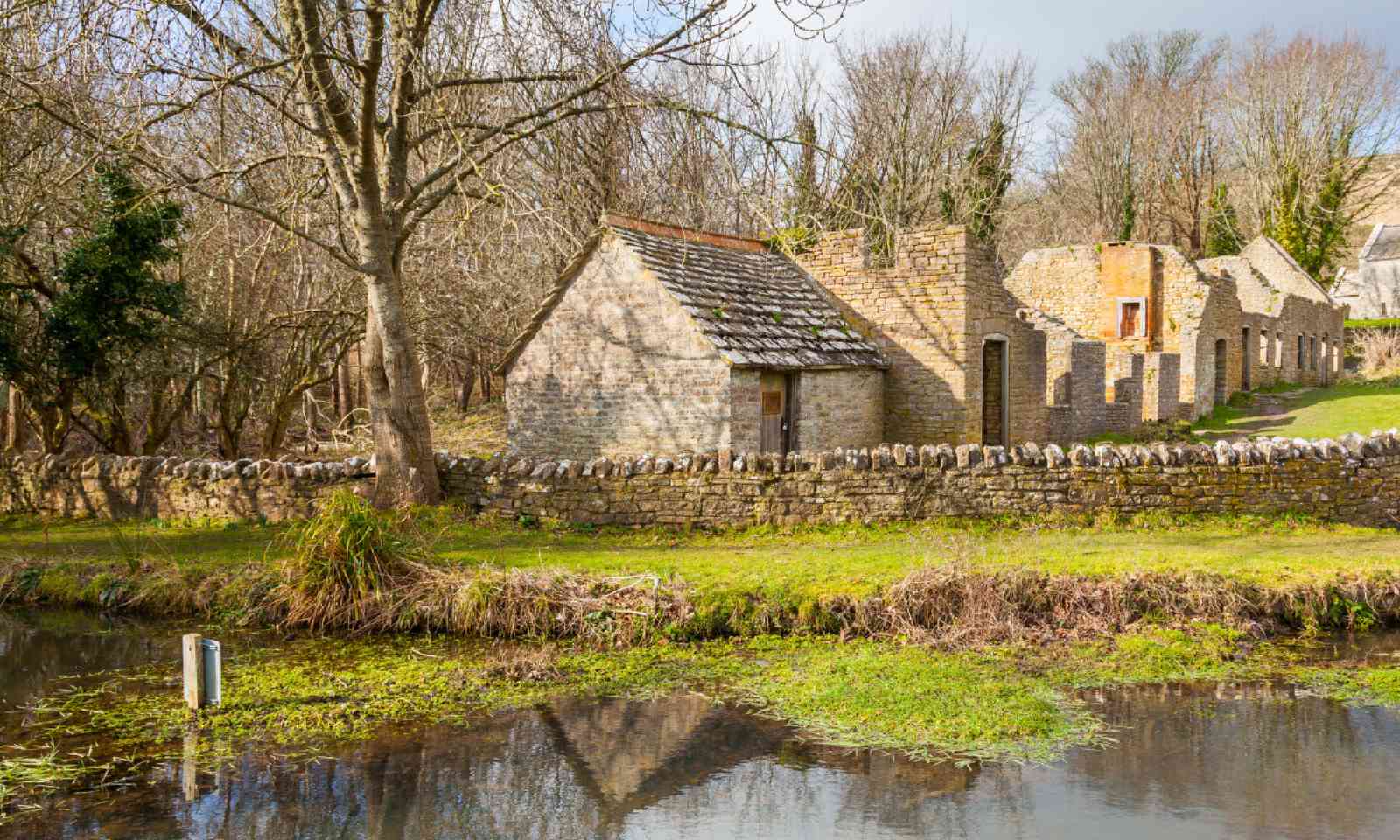 When to go: Year-round. Spring and autumn (outside of any school holidays) are the best times, offering decent weather and fewer people. Check tynehamopc.org.uk for opening times of Tyneham ghost village; call 01929 404819 for firing times at MOD Lulworth Range.

Getting there: Bournemouth airport is 43km away from both Lulworth Cove and Studland (the official start of the Jurassic Coast). The nearest train station to Lulworth is Wool (8km; on the Bournemouth-Weymouth line). You can arrange a taxi pick-up from here.

Getting around: Aside from walking the South West Coast Path, the best way to explore is by car – buses are infrequent.

Where to stay: Lulworth Cove is an ideal base for exploring the coast. Lulworth Lodge is a newly refurbished walker’s hotel, minutes from the sea, run by HF Holidays. A self-guided three-night walking break costs from £249pp and includes maps, suggested walking routes, hearty breakfasts, an ample picnic lunch and a tasty dinner.

Further reading: For more on the area see the Slow Dorset Guide (Bradt, 2015). For a good walking companion check out Walking the Jurassic Coast (Cicerone, 2015).

Start with a wander up to Stair Hole where you can peer at its multi-layer folds formed by movement in the earth’s crust. Spot the small arch beginning to form, forced by the movement of the waves – you’re witnessing the formation of the next Lulworth Cove. From here head west on the SWCP. Leave early and you should beat the crowds who park here to make their way to one of the most photographed rock formations on the coast, Durdle Door.

Admire its faults and folds from the clifftop then head down to its shingle beach to listen to the sound of the pebbles being washed up and then stolen again by the waves. Continue along the undulating trail as it hugs the steep rises of the coast.

It’s knee-busting work but persevere to Osmington Mills where you can reward your efforts with a pint of the locally brewed cask ales at the Smugglers Inn. The hostelry dates back to the 13th century and was home to the leader of a gang of smugglers in the 18th and 19th centuries. Enjoy views over to the Isle of Portland before retracing the 8.5km back (or calling a taxi). 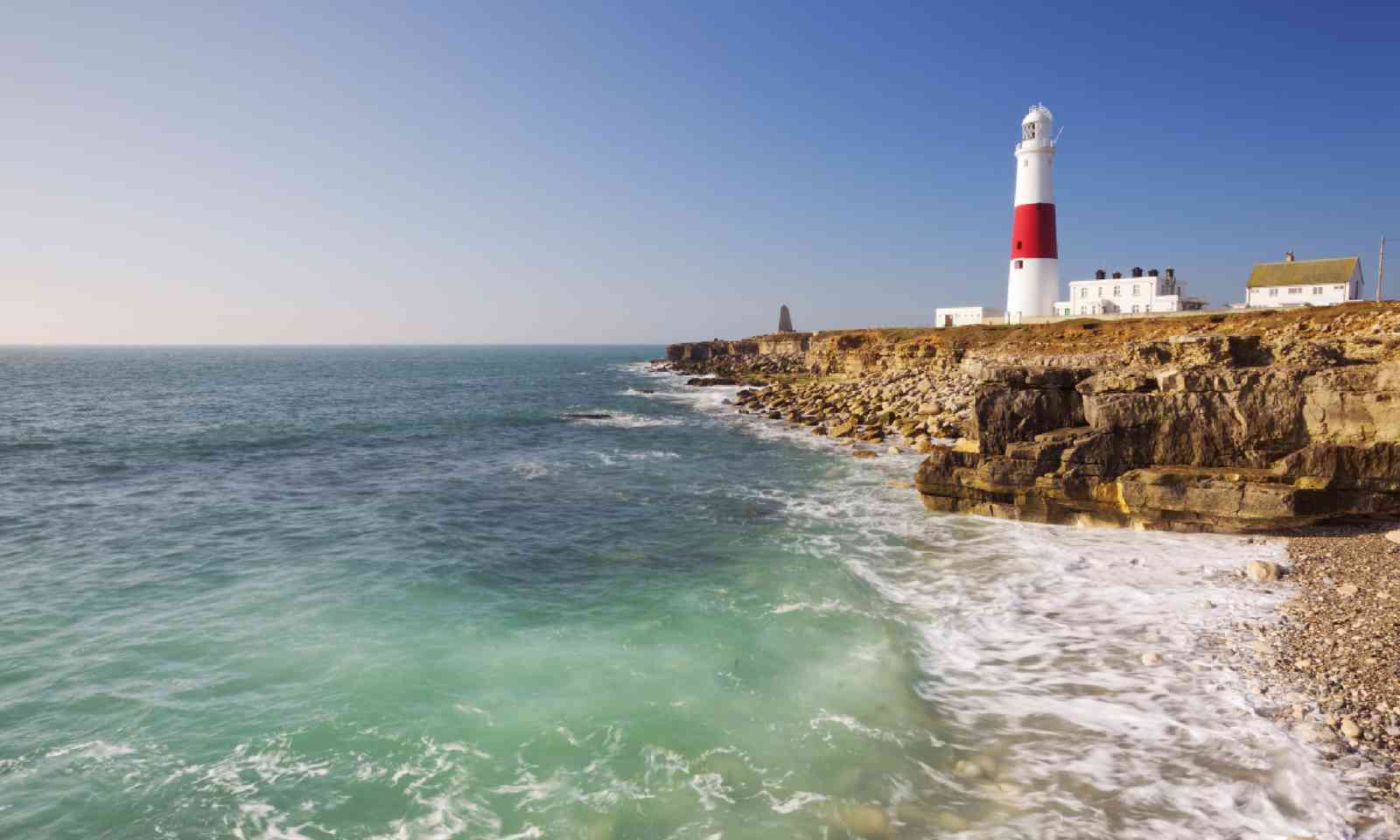 Take the SWCP heading east. You soon emerge above Lulworth Cove. Follow the path as it circumnavigates the cirque to peer back over to the cottages and bobbing sailboats. Continue on the path – as long as the military aren’t firing.

You’ll arrive above the Fossil Forest. Descend the steps to the cliff ledges to spot pimple-like rock mounds – these are burrs, created by algae that grew around the swamp trees. Fossilised trunks would have stood inside these rings, but were removed by Victorian collectors.

Head on to the ghost village of Tyneham. In 1943 the residents were served with an eviction notice, in order to allow special forces to train here. The last resident to leave pinned a note to the church door begging the MOD to look after their homes; they all believed they’d be allowed back post-war but the government did a U-turn on the promise.

Now you can wander the well-preserved church and among what remains of the cottages (now merely shells). Head back to Lulworth but take the path over the ridge rather than the coast so you can peer down into the military range where rusting tanks sit amid the grassland. 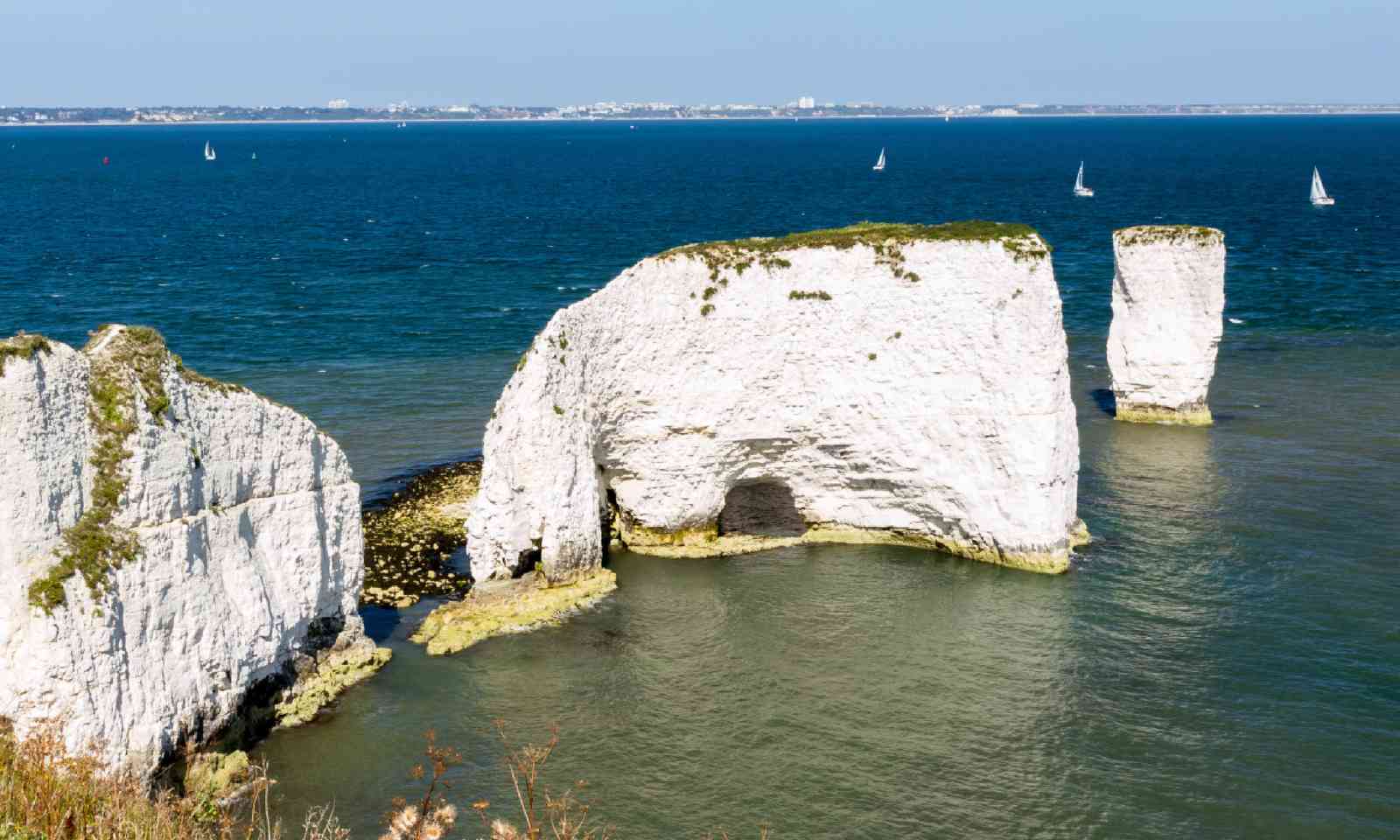 What better way to end a three-day exploration of this coast than with a journey to its start. Get in the car and drive east, bound for Old Harry Rocks, the easternmost point of the Jurassic Coast. Here, waves froth around three white stacks that were once part of a long bed of chalk running from the Isle of Purbeck to the Isle of White.

Old Harry Rocks used to be the bases of arches but are now spires. It’s a pleasant 1.5km stroll to take them in on land, or you could get closer by sea kayak. En route it’s worth visiting Durlston Country Park near Swanage. There are several trails but the best takes you down to Durlston Castle (a restaurant), past the stone map of the world and along the clifftops; here you might spy some of the 250-plus bird species that have been recorded or climbers about to tackle the cliff faces below.

Wander along to see the old lighthouse at Anvil Point. Take the inland road to pay a visit to Corfe Castle. Built in the 11th century, it’s now an atmospheric ruin that offers views over the Purbeck Hills and beyond. End at the on-site cafe for a slap-up celebratory Dorset cream tea – and a promise to come back and explore more of the Jurassic Coast.