Swathed in forest and surrounded by Alpine peaks, Ljubljana is green in more ways than one, finds Chris Moss, as he explores Slovenia’s newly crowned eco-capital...

The train hissed slowly into Ljubljana. On the way from Salzburg I had passed Alpine valleys melting and budding in the first sunshine of the year. It was the perfect introduction to Slovenia’s lush capital. Leaving the station, I took one of the city’s kavalirs – free electric buggies – to my hotel in the car-free city centre and breathed deeply.

The speed here was lively but not hectic, with most people either drinking on terrace cafés or strolling the banks of the Ljubljanica river. Cyclists came and went, travelling at what I call ‘European urban speed’ – considerate, kind, calm. None of your head-to-toe Lycra-clad London cyclists here.

A short walk from my hotel – Ljubljana is the size of a small town – took me under willow trees, past the statue of revered national poet France Prešeren to the restaurant AS Aperitivo. Here I dined on sea bass caught in the Adriatic, served with malvasia wine made by its Montenegrin owner, ‘Pops’.

If all that sounds a bit ‘green’ – well, it was only fitting. Ljubljana was named the European Green Capital for 2016, an award given to the city with the most environmental savvy. Previous winners include Stockholm and Bristol, both known for their creative approaches to raising eco-awareness. 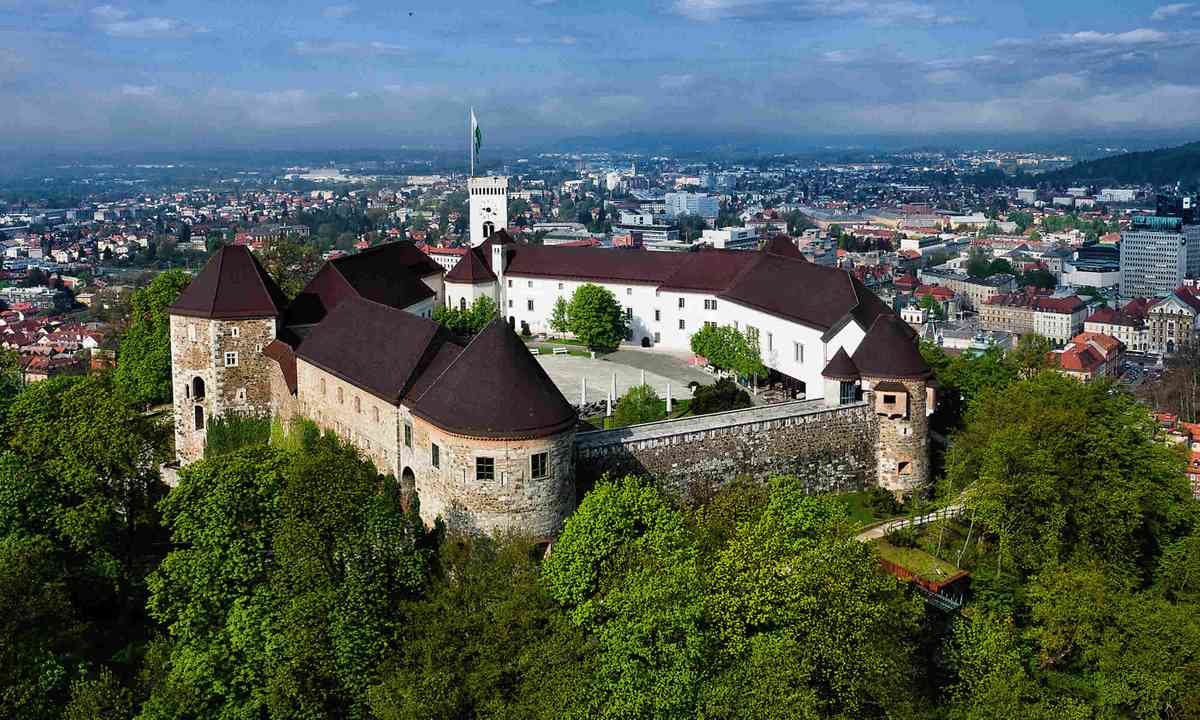 But Ljubljana is green in very elementary ways too. Almost half of its surface area is forested, and when you make the obligatory trip up to its castle – the only significant high point – you’ll see vast verdant swathes pierce the heart of the capital.

The city was founded in the 13th century as a trading hub for the Habsburg empire and lies on marshland. Canals have been dug and areas drained to make Ljubljana arable, but its suburban sprawl is small, limited by flood-prone plains to the south and mountains to the west and north.

In the capital itself, the riverbank, designed by city father and visionary planner Jože Plečnik, is officially designated a ‘public good’ – for relaxing, walks and nature. Grey herons wander its centre, while nutria (a large river rodent) bask on the steps beside the water. There are no posh apartment blocks here, no off-limits corporate areas.

Green capitals come and go, and for some cities a year in the spotlight – or sunshine – is more about image than substance. But Ljubljana has already exceeded the EU’s 2020 recycling targets by 10 percent. What’s more: in 2015, more than 1.6 million journeys were taken using BicikeLJ, the local bike-sharing system.

For active travellers, Ljubljana can easily be discovered on two feet, by bike, in a kayak or even on a paddleboard – the quiet, clean kavalirs take care of all other needs. Then, once the heart feels healthy and the muscles lean, there are some fine small museums and galleries to seek out, as well as mellow botanical gardens and parks, great local dining and a mountain range on your doorstep. Just breathe deep and explore.

When to go: Year-round. Spring and autumn are best for warm but not sweltering weather. The city is lovely in winter, but the kayaking would be cold, while the mountains soon fill up with skiers.
Getting there: Budget airline easyJet flies from London Stansted to Ljubljana; flight time 2.25 hours. Wizz Air flies from Luton.
Getting around: The city centre is compact and pedestrian-friendly. Cycling is a great way to explore the parks and green spaces. There is also plenty of public transport.
Where to stay: Vander is a trendy town-centre hotel with a great rooftop terrace and pool. Alternatively, if you want to get out of the city, Repnik Inn is an elegant rural hotel near Kamnik, full of natural wood furnishings and crafts.
Where to eat: AS Aperitivo on Čopova Ulica is one of Ljubljana’s smartest restaurants, sourcing the best produce (the seafood dishes are top class) as well as freshly baked breads, fine olive oils and boutique wines from the Karst Plateau. 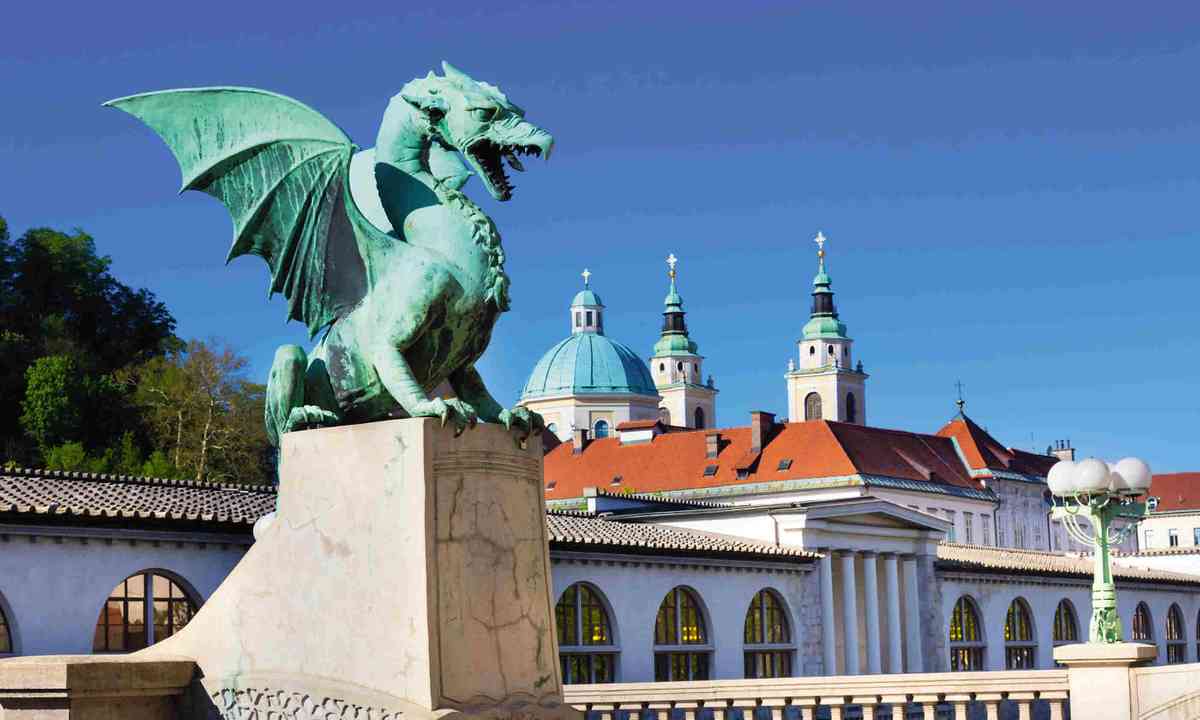 Repnik Inn (see ‘Where to stay’) in Kamnik is part of the Taste of Kamnik project, serving fine local dishes and wines. The nearby Pod Skalo pub is also great for a beer.
More info: Consult Ljubljana Tourist Board for area details. Book a bike tour or a food tour at tourist information (Krekov trg 10) or via email: stic@visitljubljana.si. Kamnik Tourism has details on group tours of Kamnik and Velika Planina. Book a kayaking trip with Iška Adventure.

Ljubljana has been a Roman camp, an Austro-Hungarian outpost and a capital of the Yugoslav Socialist Republic of Slovenia. Its history is writ large across its flat, pedestrianised streets, making bike tours ideal.

The tourist board rents bikes for a day. Grab your wheels and head to the Ljubljanica river, where the Vienna Secession-style Dragon Bridge and 13th-century Cobblers’ Bridge – named after the shoemakers that once lined it – are architectural icons.

The Botanic Gardens are nearby on Ižanska Cesta. Founded in 1810, it houses over 4,500 species of plants and trees, and is a fine spot for lunch. 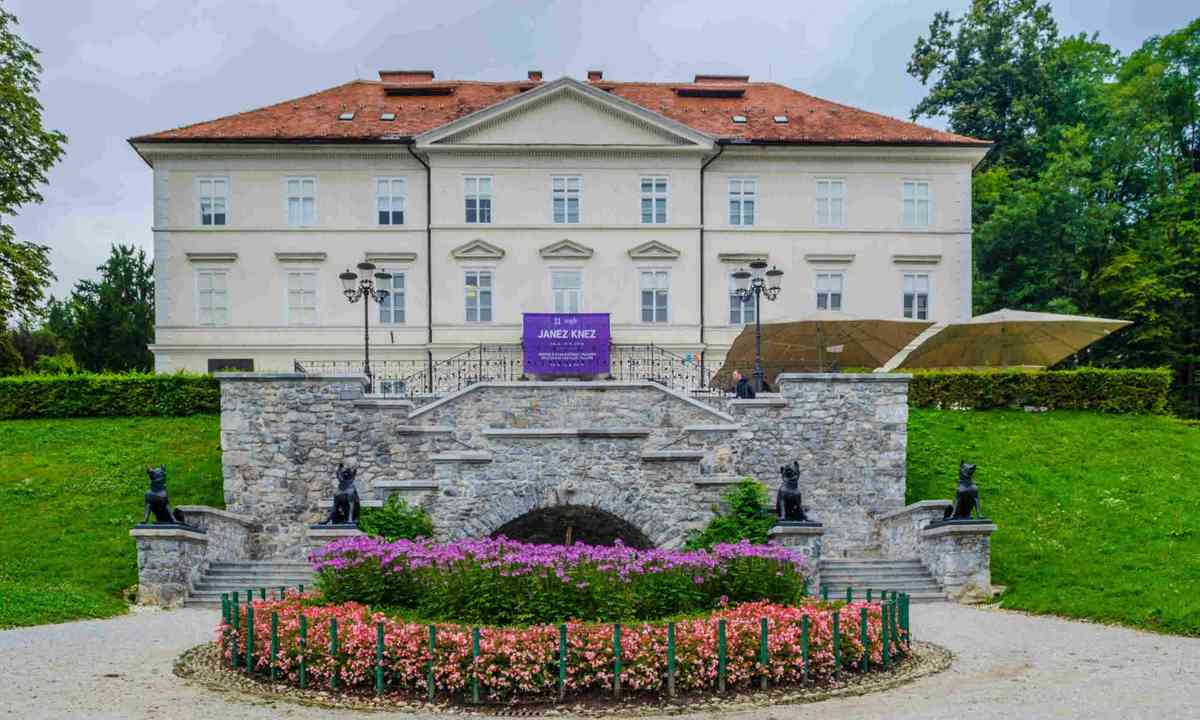 Afterwards, pedal north-west to Krakovo for its allotments, and then on to Tivoli Park for more greenery. The nearby Metelkova area, an urban squat now packed with street art and bars, is also worth your time.

Later, head to the City Museum, housed in Auersperg Palace, for costumes, scale models of never-completed buildings by Jože Plečnik, and the world’s oldest wooden wheel. Finish the day in one of the fine restaurants along the river.

A guided walking tour around Ljubljana offers a different outlook. Going on foot will help you slow down, and provides time to indulge in some of the many local delicacies.

Start with an energetic walk (or a ride in the funicular) up to Ljubljana Castle, which lies encircled by the Ljubljanica. It was built in the late 15th century and is a fascinating, if labyrinthine, building evolved from a prehistoric pastoral settlement. The castle would form an important defence against the Turks, and then later became a jail. The views from the uppermost parapet are superb and more than worth the walk up. 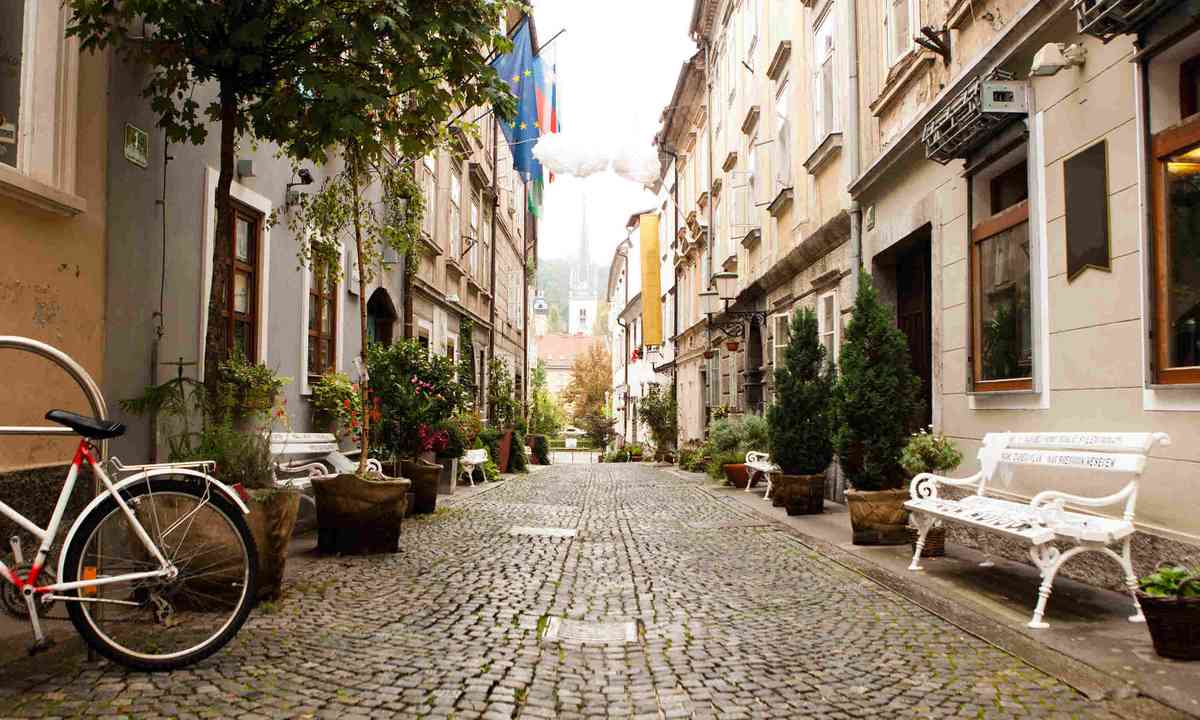 The street in Ljubljana, Slovenia (Shutterstock)

Back down in the city, explore churches, mansions, guild houses and independent shops, while the downtown eateries of Cankarjeva Cesta are good for trying treats such as Carniolan sausage and ox tongue, as well as regional wines and beers.

In the afternoon, head out of town by minibus or car (it’s a 20-minute ride) and kayak back along the Ižica river. The current is gentle, and while there are eddies and shallow areas, the water is never turbulent. Look out for storks, hawks, herons and nutria in the marshes – and inside an hour you’ll arrive deep in the leafy suburbs of Ljubljana.

Dedicate your last day to exploring the lower slopes of the Kamnik- Savinja Alps, a mountain range with 20-plus peaks topping 2,000m that lies just 50km north of Ljubljana.

Take the train from Ljubljana to Kamnik (35 min) and catch a taxi to Kamnik-Savinja, or book a guide with the Kamnik tourist board. On arrival, ride in an enclosed cable car before taking a chairlift up to 1,666m, rising over the flat-topped Velika Planina and enjoying sweeping views over the steep-sided valley.

At the top, wander wooden huts used by local shepherds during the warmer months. There are also chalets nearby that have the same rustic architecture, but come fitted with kitchens and even saunas, and there’s good skiing here in winter. 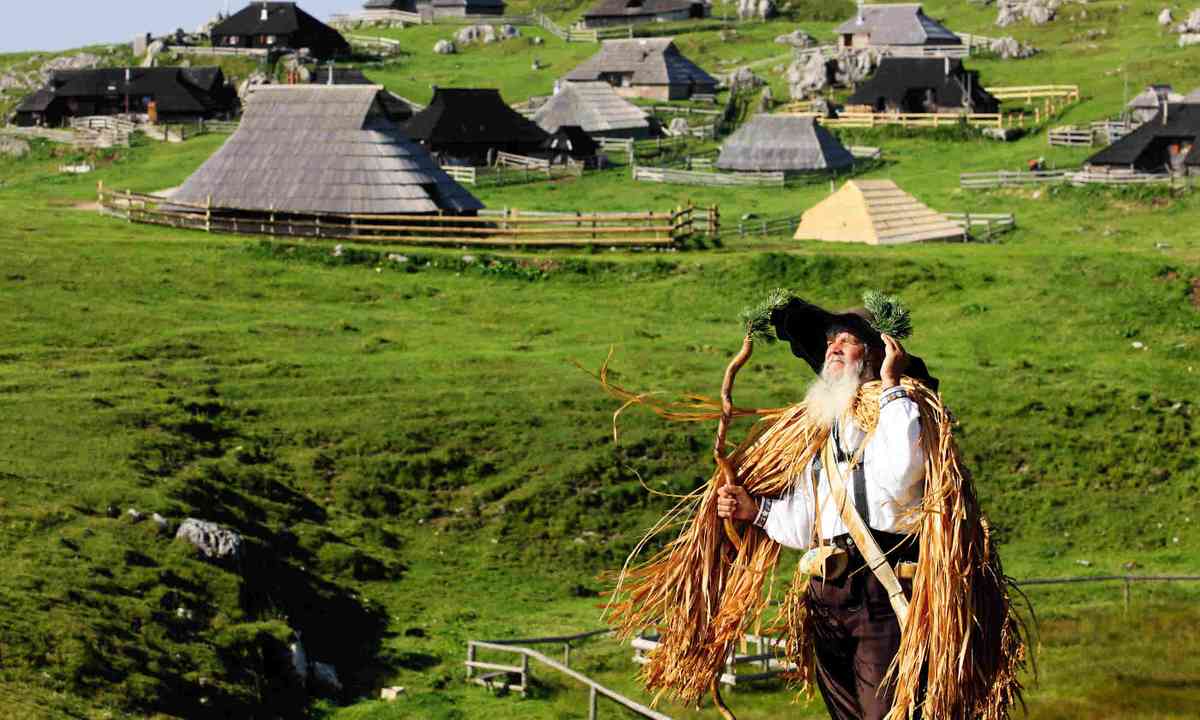 After an hour’s stroll, walk down the mountain to catch the cable car to the bottom. It’s then a ten-minute drive to the Kamniška Bistrica river for a walk following fast-flowing waters deep into a rocky gorge.

Much of the trail is in the shade of pine trees, and there is a moving memorial park dedicated to all the Slovenian mountaineers. After a one- or two-hour hike, finish back in town with dinner at Repnik Inn, and sample some local craft beers.