Behind Belgrade's hedonistic nightlife is a historic capital with a restless creativity, affordable prices and fantastic food, says Mary Novakovich...

The temperature had shot past 30°C and I was cooling off in a shaded floating bar along Belgrade’s River Sava. With an Aperol Spritz in front of me and a refreshing breeze coming off the water, I gazed across to Belgrade’s imposing Kalemegdan Fortress as it loomed over the confluence of the Sava and Danube rivers.

I was sitting in what’s known as a splav, one of the several hundred permanently moored riverside craft that range in shape and style from rusty barges to sprawling houseboats. Inside, these splavovi, which line both rivers, are the clubs, bars and restaurants that have helped to give Belgrade its well-deserved reputation for the most raucous nightlife in Eastern Europe. But they are only a very short chapter in Belgrade’s story.

Tourist boards love to come up with new slogans all the time, many of which are hilariously off target. But Serbia’s renaming of Belgrade as the ‘new capital of cool’ is pretty spot on. Half the fun of visiting the city is discovering which new district has been rebuilt, revived and turned into the latest hot spot.

A few years ago all eyes turned on the neighbourhood of Savamala, where derelict warehouses and abandoned Art Nouveau buildings were transformed into nightclubs, galleries, workshops and cultural centres. But nibbling away at Savamala’s edges is the construction of the controversial Belgrade Waterfront, which is turning this stretch of the river into the sort of sleek development that wouldn’t look out of place in Dubai.

That’s not what Belgrade is all about. Most of its rather scruffy charms lie in the streets of Stari Grad, the old town on the eastern side of the Sava. Because of a turbulent history going back to the days of the Celts and Romans – not to mention the ravages of the Ottoman Empire and the wars of the 20th century – you won’t find much that dates from before the early 1800s. Instead, you’ll see a wealth of Art Nouveau and neo-Baroque buildings along with a few notable Ottoman structures.

Wedged within it all are signs of Belgrade’s creativity and wit. Its ability to turn neglected spaces into things of ramshackle beauty rivals the ‘ruin bars’ of Budapest. If there’s a courtyard that can be converted into a shabby-chic garden restaurant, it will be done. If there’s a ragged, crumbling 19th-century townhouse going begging somewhere, expect to see a stylish emporium combining a concept store with a café and a bar – and all at incredibly affordable prices.

Everywhere you look you see the café culture that is such a fundamental part of Serbian life, along with a restaurant scene that is almost dizzying in its variety and constant reinvention. Belgrade might occasionally sleep but it never truly stops moving, and therein lies its charm. 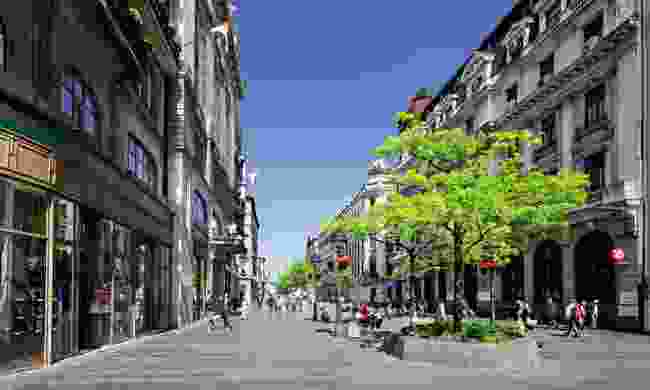 Begin at Knez Mihailova, the pedestrianised artery that pierces Stari Grad. Its 19th-century buildings are home to shops and restaurants, and its café terraces, buskers and kiosks add a carnival vibe. Look for the Zepter Museum, which has a fine collection of Serbian contemporary and modern art, and down the street is the city’s hub, Republic Square.

Stroll up Knez Mihailova to reach Belgrade’s historic and green heart, Kalemegdan. Within this huge park lies an 18th-century fortress and museum, along with tree-shaded paths that lead to a bluff over the Sava and Danube. Take the one heading to Beton Hala, a waterfront warehouse converted into restaurants for lunch.

Back in the central Dorcal district, stroll the shops and eateries of Kralja Petra before hitting Strahinjica Bana, a street that, despite changing tastes, still causes a buzz. Nearby Skadarlija district is more touristy but was once the bohemian haunt of writers and artists in the 1800s; now its cobbles are filled with old Serbian restaurants – both Tri Sesira and Dva Jelena are very good – where everyone is serenaded by folk musicians (more fun than it sounds).

Cross the Sava by walking over the Brankov Most to Novi Beograd (New Belgrade). Follow the riverside path to the right, through Usce and past the over-the-top splavovi along the Sava and, eventually, the Danube. Pop in the futuristic-looking Museum of Contemporary Art, which reopened last year after lengthy refurbishment.

This footpath is one of the most pleasant in the city to explore, either on foot or by bicycle. You’ll see a large nature reserve and beach on Veliko Ratno Ostrvo (Great War Island), and during summer – usually from around the third week of June – you can access it via a pontoon bridge.

When you reach the suburb of Zemun, you’d be forgiven for thinking you’d strayed into Hungary. Until the end of the First World War, the town (and all of northern Serbia) was part of the Austro-Hungarian Empire, which is obvious once you spot the Baroque architecture.

Stop at one of the waterfront cafés along the Danube before continuing to the Upper Town, towards Gardos Tower. This was built in 1896 by the Hungarians to mark 1,000 years of regional settlement (hence its other name of Millennium Tower). It’s worth a climb to catch some of the best views in the city. 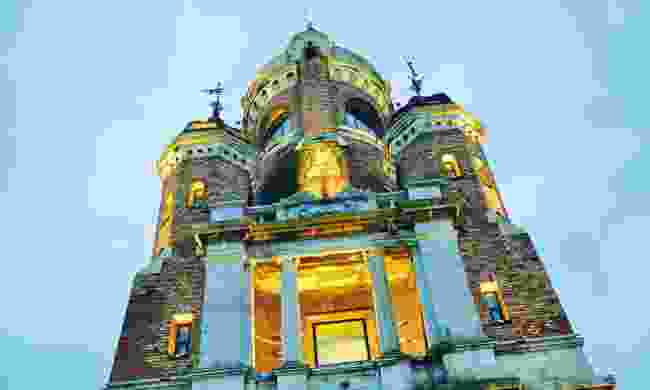 When temperatures soar, Belgraders head south to the river island of Ada Ciganlija in the Sava. It’s the city’s summertime playground, with cafés, beaches, watersports, cycle hire, a cinema and lots of places to ramble.

If you want to explore more of Serbia, follow the Danube eastwards to the Roman archaeological park at Viminacium, where you can visit the ruins of an amphitheatre, public baths and mausoleum. Carry on further to Djerdap NP, Serbia’s largest park, where the Iron Gates Gorge rises dramatically above the Danube and forms a natural border with Romania. Keen cyclists can take the EuroVelo 6 path that runs via the park, or simply hike, hire a kayak or take one of the regular Danube boat trips from Belgrade that include the ancient settlement of Lepenski Vir, Golubac Fortress and Djerdap.

The Danube’s western highlights include Serbia’s second city, Novi Sad, which hosts the EXIT music festival every July at Petrovaradin Fortress. Along the way, detour to Fruska Gora NP and follow the trails leading to its 16 monasteries or the 60-odd wineries that scatter its green hills. Stop, too, in the Danube town of Sremski Karlovci, which has elegant baroque architecture and wineries.

Top tip: If you’re travelling by taxi, don’t set off until the meter has started. Similarly, when arriving at the airport, ignore the taxi touts outside and book a reasonably priced official taxi from the desk by the baggage claim. 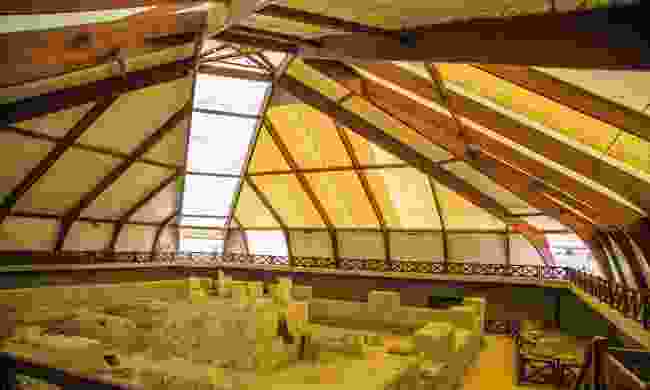 When to go: Go in spring, summer and early autumn to make the most of the weather and the events going on in the city. The Christmas period can be quite magical, too, and it continues until Orthodox Christmas, which takes place in January.

Getting around: The old town is easy to explore on foot. The public transport system consists of sleek new trams, old-style trolleybuses and buses; tickets can be purchased on board or from kiosks and last 90 minutes.

Where to stay: Saint Ten is an elegant hotel in a historic townhouse near Sveti Sava Temple. Courtyard by Marriott is also in a prime location, facing Republic Square. Smokvica is an agreeably shabby-chic eight-room hotel in the classy Vracar district.

Where to eat: Mediterranean tastes fuse with Serbian at Tezga Bar in Strahinjica Bana. The same Smokvica group that runs the hotel has a fine in-house restaurant as well as another branch in Kralja Petra, where Middle Eastern flavours mingle with Slavic cuisine.

Further details: Visit www.tob.rs for a good overview of the city. 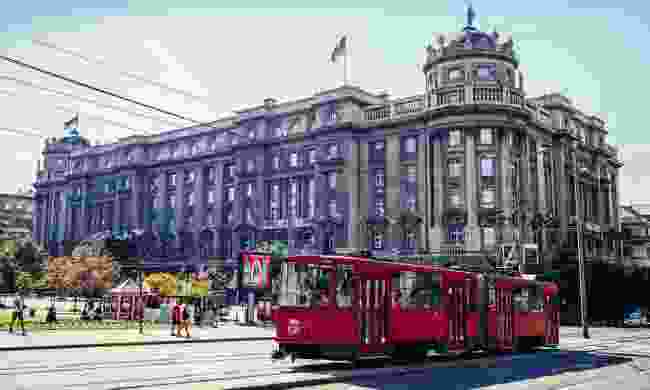