A short break in Athens, Greece

With over 2,000 years of history complemented by a vibrant contemporary scene, the Greek capital is one of Europe’s top budget city break spots...

Sometimes it seems that every corner in Athens is home to a crumbling tower, a patch of cracked mosaic or an ancient heap of stones. They’re so common that after a while you start to take them for granted. Then, at unexpected moments, the shocking realisation hits you again: many of these relics were already considered ancient even when the first Roman centurions set eyes on them.

Lots of European cities boast monuments that have been there for centuries. A few have treasures that are a thousand years old. Athens stuns you with its sheer ubiquity of historical riches that date back as far as two-and-a-half millennia.

In more recent times this city has lured tourists who viewed it simply as a launching pad to some of Greece’s 3,000-odd islands. They’d stop over for a night – maybe two – to take in the Acropolis before hopping onto another flight (or ferry) to some sun-blessed Mediterranean isle. But finally Athens is gaining recognition as a destination in its own right.

The economic crisis has hit hard, but has made the Greek capital one of the most affordable cities in the region. Inner-city transportation is inexpensive, safe and reliable; better still, because all of the sights you’ll want to see are within an easy 40-minute stroll, you don’t even need to rely on it.

Wherever you walk around central Athens you feel the presence of the mighty Acropolis at your shoulder, dominating the city as it’s done since time immemorial. Along with the Parthenon, the Temple of Olympian Zeus and the Panathenaic Stadium, the Acropolis is a highlight of most visits. A long weekend in Athens need not be all about history, however.

Take a few days getting to know the chic Kolonaki quarter, pretty Plaka or the hip and bustling nightspots around Gazi and you’ll be astounded by a city that seems at first glance to be booming. Perhaps because they’ve spent the last few millennia rolling with the punches of history, the Athenians’ tenacity and love of their city is nothing less than an inspiration.

Central Athens is seeing an incredible revival in both traditional and contemporary arts, with young Greeks working together to set up new exhibition spaces, quirky cafés, underground bars and indie theatre venues all over the city. First-time visitors who make the effort to explore Athens’ local neighbourhoods invariably find themselves falling in love with what is one of the most vivacious and excitingly contemporary cities in the world.

When to go: Athens is a year-round destination. Summers are busy and hot (up to 40°C); winters are benign (hovering around 15°C), infinitely less crowded and arguably the best time for a city break.

Getting there: The city is well-served by direct flights from Europe and the rest of the world.

Getting around: The easiest way to get from the airport into the city is to take the Metro (€8). Athens has plenty of taxis and all have meters (sample fare: €5 for a ride up Lycabettus Hill) but most sights are within walking distance.

Where to stay: New Hotel (yeshotels.gr) is a chic designer pad close to Kolonaki; B&B doubles from €165. Alice Inn Athens is a stylish townhouse in Plaka; doubles from €15pppn. The central Grecotel Pallas Athena has just re-opened after renovations; doubles from €108. Fresh Hotel is a cool design hotel near the bustling central market; doubles from €86.

Where to eat: Popular and affordable, Nice n Easy (60 Omirou & Skoufa) is the hippest organic restaurant in Kolonaki. Papadakis (15 Fokilidou & Voukourestiou) is the venue for an unforgettable splash-out feast. Brettos (41 Kidathineon) is the oldest distillery in Athens and the perfect place for a nightcap. 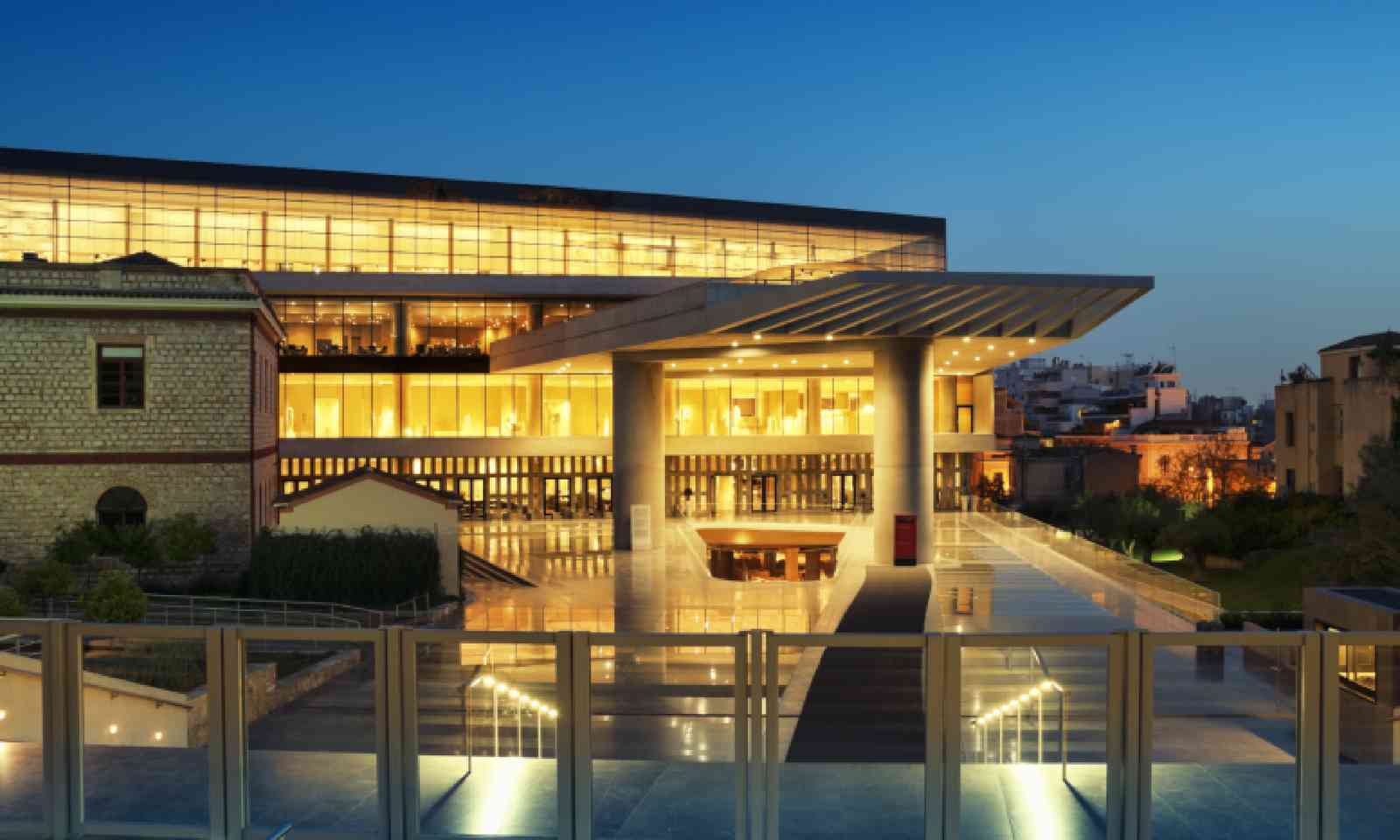 Start by making a beeline for the Acropolis. Whichever way you approach it, you will eventually find yourself in Dionysiou Areopagitou Street, often described as the most beautiful street in Europe. It’s also the location of the Acropolis Museum (pictured above), a must-visit if you hope to understand the soaring temple columns that sit opposite the museum’s rooftop café.

From the Acropolis’ viewpoint you can orientate yourself perfectly: the city is all laid out. Bring binoculars and you might even be able to get a sneak preview of the little terrace tavern in old Plaka that will later entice you for lunch.

Lunch is not to be rushed in Athens but when you do eventually stroll out of Plaka through Hadrian’s Arch (Athens’ own Arc de Triomphe) you’ll find yourself facing the pillars of the Temple of Olympian Zeus, and just a short walk from the Panathenaic Stadium where the original Olympics were held. The stadium itself has been rebuilt but you can still visit the eerie old tunnel where Greek damsels once danced naked in the hope of securing a favourable marriage.

As the shadows begin to lengthen, wander back along Dionysiou Areopagitou Street to the Thissios neighbourhood (allow half an hour). Pick one of the many rooftop cafés to watch the sunset reflect on the temple columns of the Acropolis. 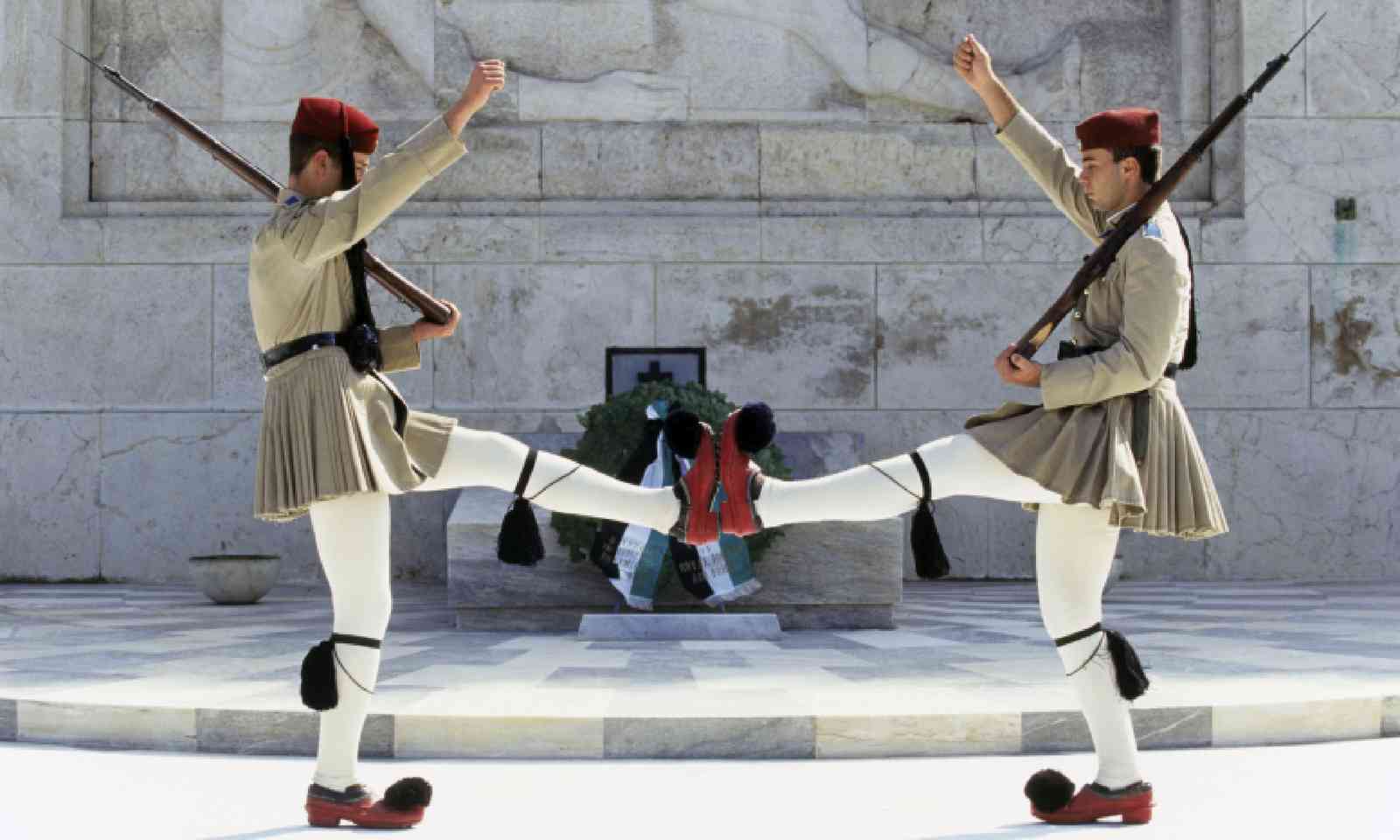 If yesterday was all about history, today is about the living museum that is central Athens. Start with a climb up Lycabettus Hill, the highest point in Athens, to watch the Med dawn. Then, wander slowly off its cactus and conifer-shrouded flank to enter Kolonaki, Athens’ ritziest area and home of most of its fine restaurants and designer boutiques.

Cross the traditional meeting place of Syntagma Square and wander down the main shopping thoroughfare of Ermou Street to the hip terrace cafés around Agias Irinis Square (pictured above), a cue you’ve arrived in thriving Monastiraki. Its thriving underground bars and tavernas have been re-energised by entrepreneurial young Greeks working to revive traditional tastes. Spend an hour sipping tsipouro firewater while listening to live rebetika folk music.

Monastiraki is also known for its less mainstream shopping streets; Avissinias Square is a jumble of shops specialising in everything from Ottoman-era antiques to 70s bric-a-brac. A stroll downhill will land you among the industrial-era architectural gems of the Gazi (Gasworks) quarter in time for a sundowner in one of Athens’s liveliest nightspots.

To gain a real insight into this ancient Mediterranean city, head to the Aegean coast and the so-called ‘Athenian Riviera’. Since the air-conditioned coastal tram started running a decade ago, the beach suburbs of Faliro, Glyfada and Voula have become popular residential areas for Athenians who are willing to commute. Catch a tram from Syntagma Square to Athens’ best city beach at Voula (about 1hr 20mins; €1) and take in many of the traditional neighbourhoods that few outsiders see.

After a morning soaking in blissful wavelets that will make you wonder if there’s any need to head for the islands, mosey back via Glyfada. With its wide boulevard and prestigious residences some call Glyfada the ‘Athenian Beverly Hills’. Eating out here can be expensive so head back to Faliro and the fish restaurants around Alimos Marina.

From here you can stroll along the prom to Flisvos Marina, the mooring spot for some of the most spectacular super-yachts in the Med – which are probably worth enough moolah to refloat Greece’s sinking economy.