Seychelles: Eden in the ocean

Paradise, simple as that: the 115 islands of the Seychelles are lush, turquoise-lapped, rich in culture, even richer in wildlife. And a trip there doesn’t have to cost the earth

The steep climb had been suffocatingly hot, but my reward was laid out before me. From my vantage point on top of Morne Blanc I looked out over a string of tiny jewel-like islands, verdant oases fringed with blindingly white sand floating in an expanse of dazzling blues – aquamarine seeping into azure, azure into cobalt.

The Seychelles – an archipelago of 115 islands, many of which are uninhabited – is an archetypal tropical paradise sitting in splendid isolation in the middle of the Indian Ocean, four degrees south of the equator. Today it’s synonymous with five-star luxury and private island idylls that attract a succession of celebrities. But accommodation is actually as diverse as the islands themselves and the extraordinary landscapes are accessible to those on a more meagre budget. There’s no need for fine-dining restaurants when you can feast feet-in-the sand on Creole staples, and the wild nature and sublime beaches are free of charge.

There’s a long and varied history here too. In 1502, the Portuguese explorer Vasco de Gama passed through the coralline Outer Islands, which he named after himself – the Amirantes, or the Admiral’s Islands. The granitic Inner Islands, with their monumental boulders moulded by wind, rain, sand and sea, were formed from the leftovers of the prehistoric supercontinent, Gondwana. They were already a pit stop for pirates when the French, realising that they were a useful transit point for African and Asian trade, staked their claim in 1756, bringing with them slaves from Africa.

By 1811, the islands had fallen under British control and didn’t gain full independence until 1976. It’s all created a genuine melting pot of European, African and Asian influences, and a polyglot nation that speaks Creole, English and a smattering of French. 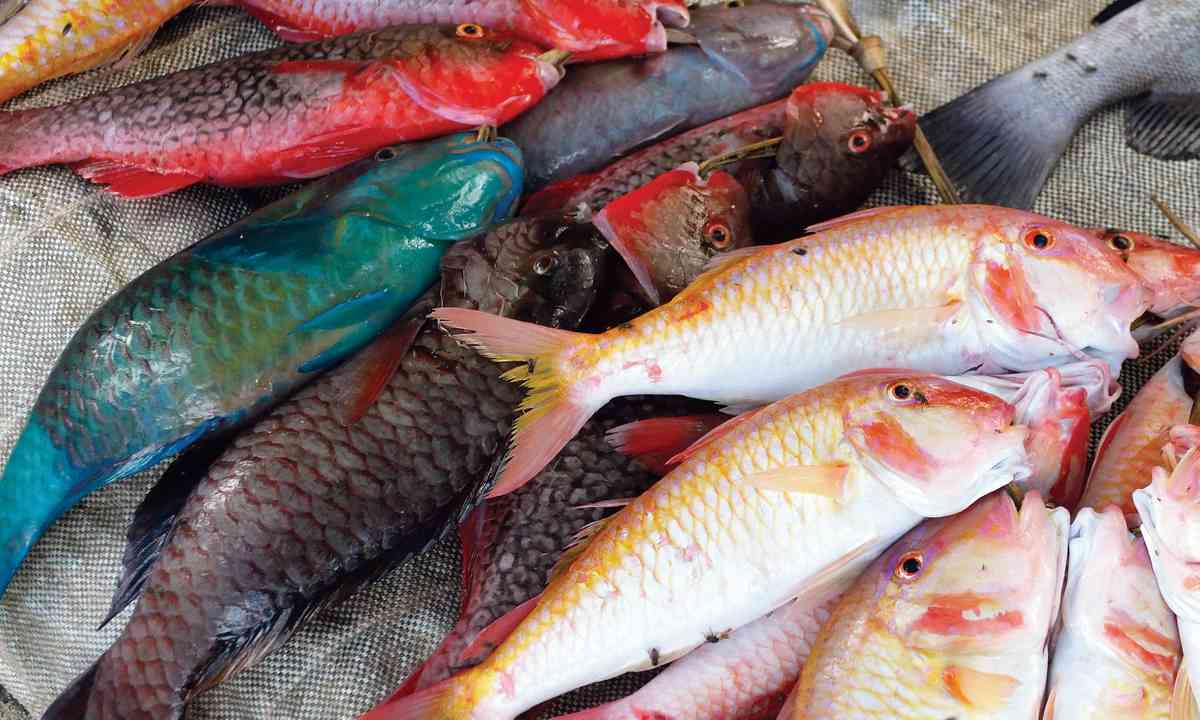 Array of fish on sale in the markets (Sarah Gilbert)

There are three main islands, each with their own distinct personality. Mahé, the largest and most developed, is home to the international airport, as well as about 90% of Seychellois. It has its share of idyllic beaches – there are over 65 of them on this 27km long and 8km-wide island, backed by vegetation rather than concrete resorts. It is also home to Victoria, one of the world’s smallest capitals.

Fishing is as important as tourism here and on an early morning visit to the colourful Sir Selwyn Clarke Market, I joined the locals watching the catch of the day – giant red snapper, rainbow-coloured parrotfish and silver-grey shark – being expertly gutted and cleaned, while stallholders shouted to each other in singsong Creole. And it wasn’t just fish: mounds of red-hot chillies, colossal breadfruit and fragrant spices were among the fresh produce spread across the many little stalls. In fact the island is like a giant garden; everywhere you look there are mangos, guavas and jackfruit weighing down branches.

Away from Victoria, the road snaked up into the mountains that form a central spine along the length of the island; here, walking trails thread amid the high-altitude tropical forest and cooling breezes of Morne Seychellois National Park. Far from manicured, the lush foliage is barely constrained – no surprise that the island’s original name was L’Île d’Abondance.

Hidden in the hills, Le Jardin du Roi is a wooden plantation house that, with a few renovations, has been in the same family for seven generations. A former cinnamon and vanilla plantation, today it overlooks terraced gardens filled with exotic trees and shrubs. The entrance fee allows you to follow a self-guided trail, and I got a taste of Seychellois history as I explored the spice-scented pathways lined with citronella bushes, nutmeg trees and evocatively named medicinal plants such as Job’s tears and lion’s ear. The air was suffused with the heady perfume of ylang-ylang and patchouli.

You can hire a car to get around Mahé – they drive on the left – but I let a public bus navigate the island’s many twists and turns for me. On Sunday afternoon I headed to Beau Vallon on the north-west coast where, after church, the locals take their rum and snapper to barbecue on the beach. I sat under the shade of a towering takamaka tree until the setting sun streaked the ocean pink and gold.

Praslin, the second-largest island, has a small airport but can easily be reached by an affordable one-hour catamaran journey. It shares the same gin-clear waters but has a quieter, less hurried pace. And at the island’s heart is a tangled, primordial jungle – one of the best-preserved ecosystems in the world. 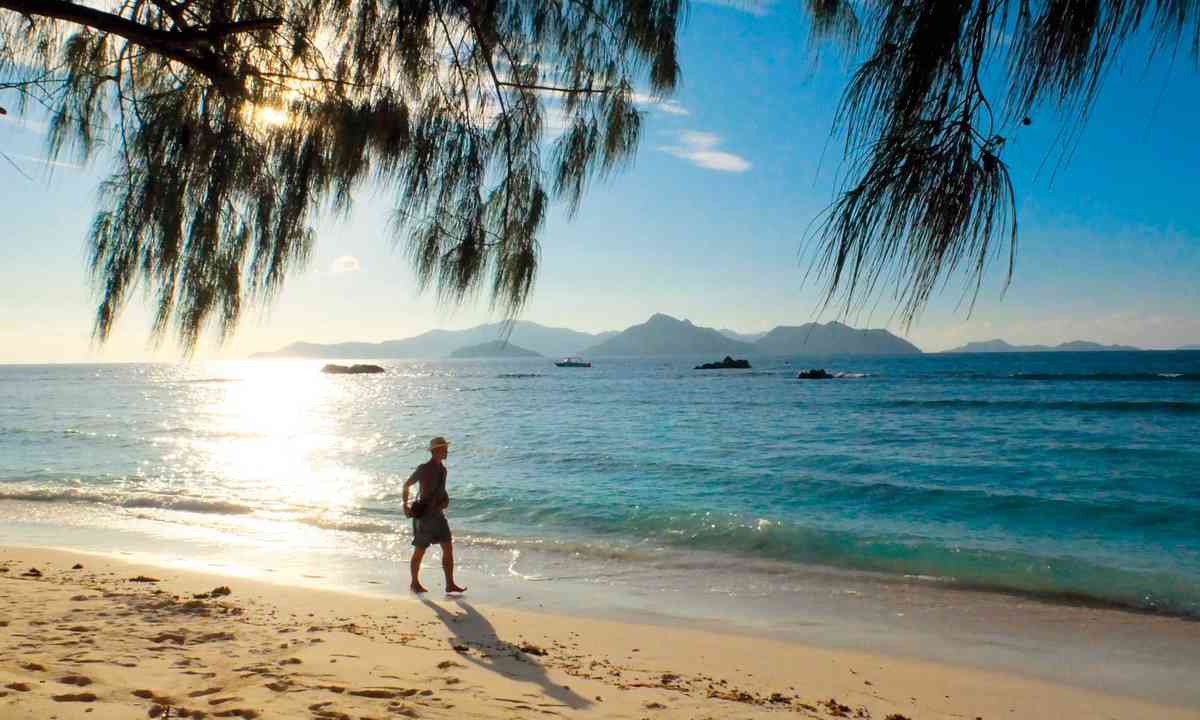 As I walked the trails, vegetation seemed to burst from the forest floor – no wonder people thought that this might be the original Garden of Eden. The lofty palms almost blocked out the sun, their enormous fan-shaped leaves allowing only narrow shafts of light to sneak through. From high in the trees came the chatter of the Seychelles bulbul and I thought I heard a high-pitched whistle, the call of the elusive Seychelles black parrot.

Once prized for the medicinal properties of their jelly-like flesh, the coco de mer is now protected and comes with a certificate and a sizeable price tag. The Vallée de Mai itself has a €20 entry fee but a cheaper, larger and far less-visited enclave for the coco de mer is a new reserve, Fond Ferdinand in the south of the island, where you can hike the trails for views over the port of Baie Ste Anne.

Praslin has no shortage of magnificent beaches. On the north-west of the island, the jungle-backed crescent of sand known as Anse Lazio (anse is French for cove) makes a regular appearance on ‘world’s most beautiful beaches’ lists. However, the beach that topped my list was on the property of the five-star Constance Lémuria; as all Seychelles beaches are public (if you can reach them), you can call the resort in the morning and ask to be put on the guest list for Anse Georgette.

As I wandered along the long, undulating path that skirts the resort’s 18-hole golf course, I got my first tantalising glimpse of Georgette. Standing on it was even more spectacular: the dazzlingly white sand, so powder-fine it squeaked, was licked by white-tipped waves; there were whispering casuarina trees offering shade from the equatorial sun; there was barely another soul in sight.

In order to meet more of the archipelago’s wild inhabitants, I opted for a day trip to three small islands. My first stop was Cousin, a former coconut plantation that has been transformed by BirdLife International into a biodiversity hotspot – it’s a breeding ground for hawksbill turtles and home to the last population of Seychelles warblers. There are an impressive number of bird species on this mini-Galápagos, and on my guided tour I got up close to nesting white-tailed tropicbirds, which were completely unfazed by the arrival of the tourist paparazzi. 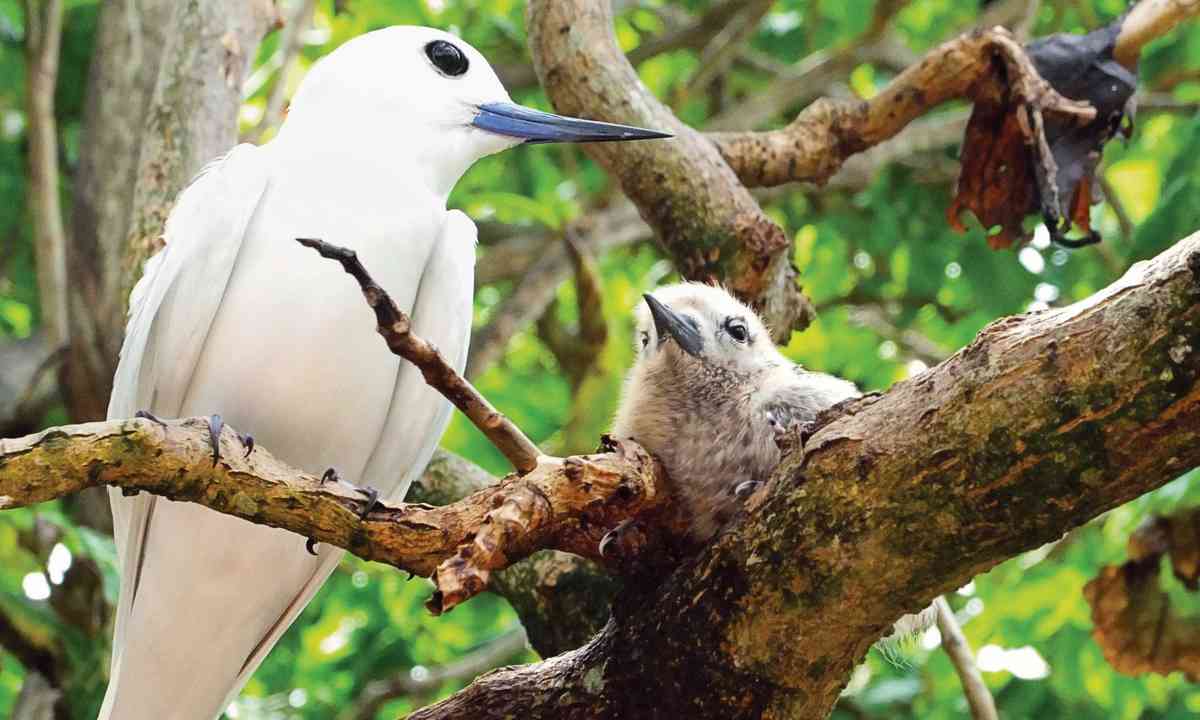 On Curieuse Island, a former leper colony, a large population of prehistoric-looking Aldabra giant tortoises roam free, some of them around 150 years old and weighing a hefty 400kg. As I walked along the raised boardwalk that runs through the sulphurous-smelling mangroves, I watched giant red crabs scuttling sideways into their holes and saw the scarlet flash of the tiny Madagascar fody.

After a beach feast of grilled red snapper, I donned a snorkel and flippers and jumped into the translucent water around the granitic islet of St Pierre. Floating above an array of vibrant coral – flat-topped table, clusters of mushroom, forests of staghorn – and a steady stream of extravagantly coloured fish – oriental sweetlips, parrotfish, clownfish – I watched as a graceful sea turtle disappeared into the depths.

A touch of Crusoe

A 15-minute ferry ride separates Praslin and diminutive La Digue, the smallest of the inhabited islands. Out of the three, La Digue has clung most firmly to vestiges of the archipelago’s older, simpler way of life; French, Italian and German travellers are long-time fans of its lush beauty and back-to-nature feel, where shop signs read ‘Open some days, closed others’. La Passe on the west coast, where the boats arrive, is the epitome of a sleepy tropical port. There are no large resorts or international chains here, just simple, family-run guesthouses and a couple of stylish boutique hotels.

With no airport, only a couple of surfaced roads and virtually no cars – as well as a few brightly painted ox carts to ferry visitors around – bicycle is the best way by far to travel along the island’s sandy streets. I cycled through the village, exchanging greetings with the locals as I passed stalls weighed down with an array of tropical fruits, a gaggle of schoolchildren and a man with a string of fresh fish hanging off his handlebars.

I left my bike in the vanilla-scented L’Union Estate, an historic plantation where the tranquillity is only shattered by the occasional thud from a falling coconut. I followed the palm-shaded path that leads to one of the world’s most photographed beaches, Anse Source D’Argent – just one in a line of jaw-droppingly beautiful bays, flanked by elemental grey boulders that spill into the turquoise water.

Despite L’Union Estate’s SRS100 (£5) entry fee, there’s no shortage of daytrippers along this stretch of shoreline. But, with a bit of effort, there are even more idyllic beaches to discover. I cycled slowly across the island to Grand Anse on the wilder east coast. With guide Robert Agnes (overgrown trails can be hard to find), I clambered over rocks and wound between increasingly hard-to-reach coves to arrive at Anse Marron, a glorious Crusoe-esque sweep of sand on the island’s southern tip.

Beyond the beaches, much of La Digue is an impassable mass of rock covered in luxuriant greenery, but there are walking trails. Early one morning, before the heat of the day set in, I headed inland and took the winding, narrow path up Nid d’Aigle (Eagle’s Nest), the island’s highest point. From here I enjoyed panoramic views over forested slopes and the islands beyond.

Later, I cycled around the northern tip of the island to Anse Banane, where I’d made a reservation at Chez Jules. If he has no customers, the garrulous Jules is in bed by 9pm but at weekends his rustic eatery is packed with locals. That evening there were seven Europeans sitting around his communal, wooden table. There’s no menu to speak of; large platters of delicious Seychellois dishes just kept emerging from his simple kitchen: smoked fish salad, octopus (caught by Jules that afternoon) in a delicate, coconut-milk curry; fish fillet à la Creole. We washed it all down with ice-cold bottles of the local beer SeyBrew, while Jules taught us some Creole in his lilting accent, a relaxed hybrid of French, English and West Indian with its own distinct inflections. “Manze (eat),” he encouraged us, telling us to use our hands.

We rounded off with shots of sweet, dark local rum before I freewheeled back down the coal-black hillside with the aid of a torch and the full moon, to the cry of “Bonswar! Until we meet again.”

The author travelled with Rainbow Tours (020 7666 1250, rainbowtours.co.uk) on its 12-day Secret Seychelles tour, which visits Mahe, Praslin and La Digue.