Nestled in the Colombian massif in Huila province, the Magdalena River is home to Latin America’s largest necropolis and a lost civilisation shrouded in mystery... 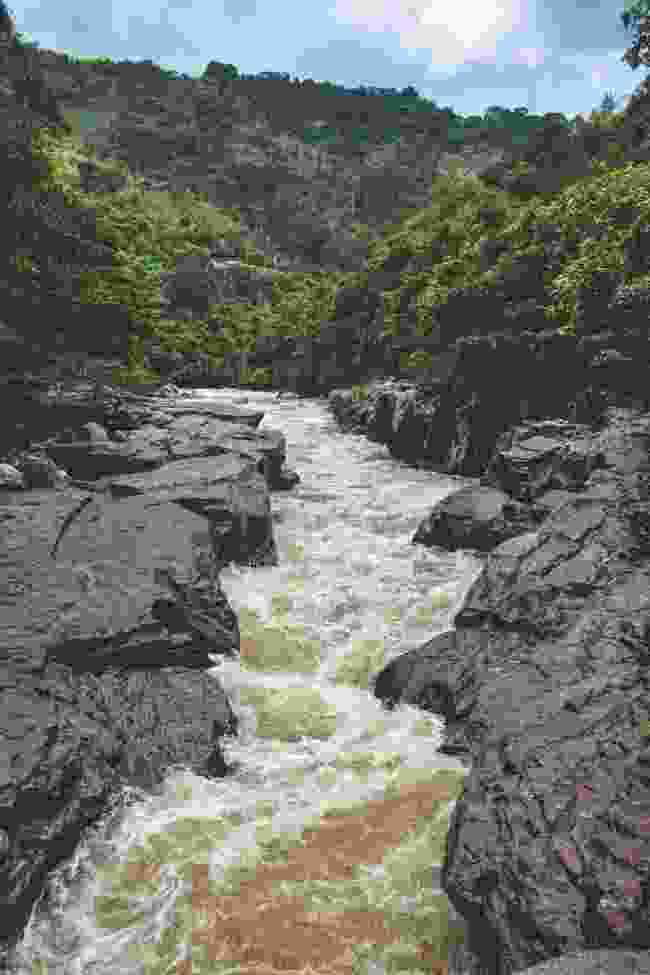 We tethered the horses at a fence, walked along a switchback track and then headed down a metal staircase over the rocks to a small plateau called La Chaquira.

The voice of a woman singing hovered like birds on thermals. I looked at the ground falling precipitously to the river surging through  a winding gorge hundreds of metres below.

There were coffee plantations on many of the slopes, but how people managed to harvest them without slipping down into the river I couldn’t imagine.

Examining the view, it felt instinctively like  a holy place. Jorge E Peña, my guide, pointed at a rock overlooking the gorge. There was a larger than life-sized figure carved in relief with staring eyes and arms raised.

I felt a bit like that myself, gazing at this landscape with its distant waterfalls and rushing river. This was the largest of the incised figures and, with help, I started to make out other images dotted around – of humans and animals.

This was a ceremonial site of the people who had lived here well over 1,000 years ago.

Listen to this article... 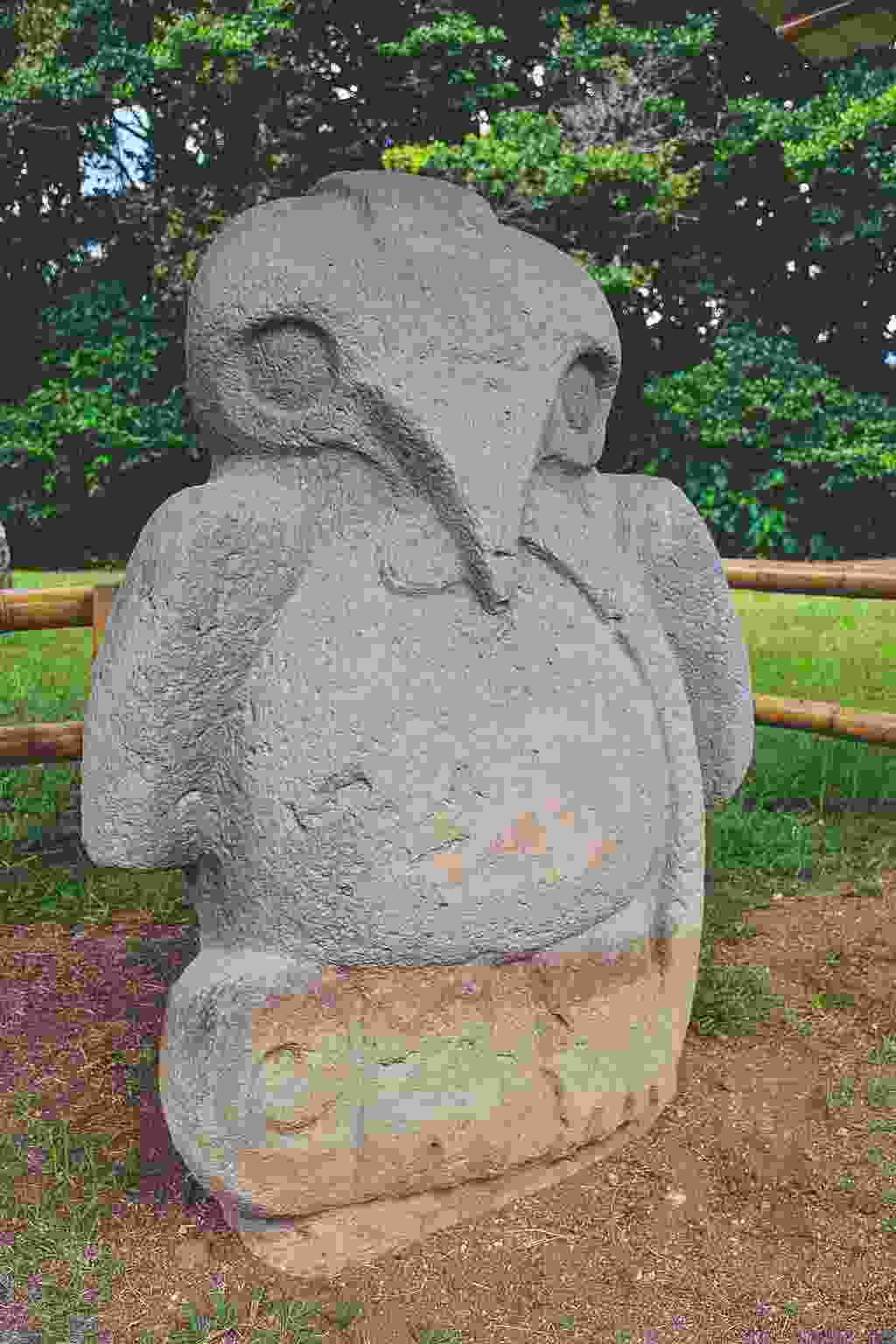 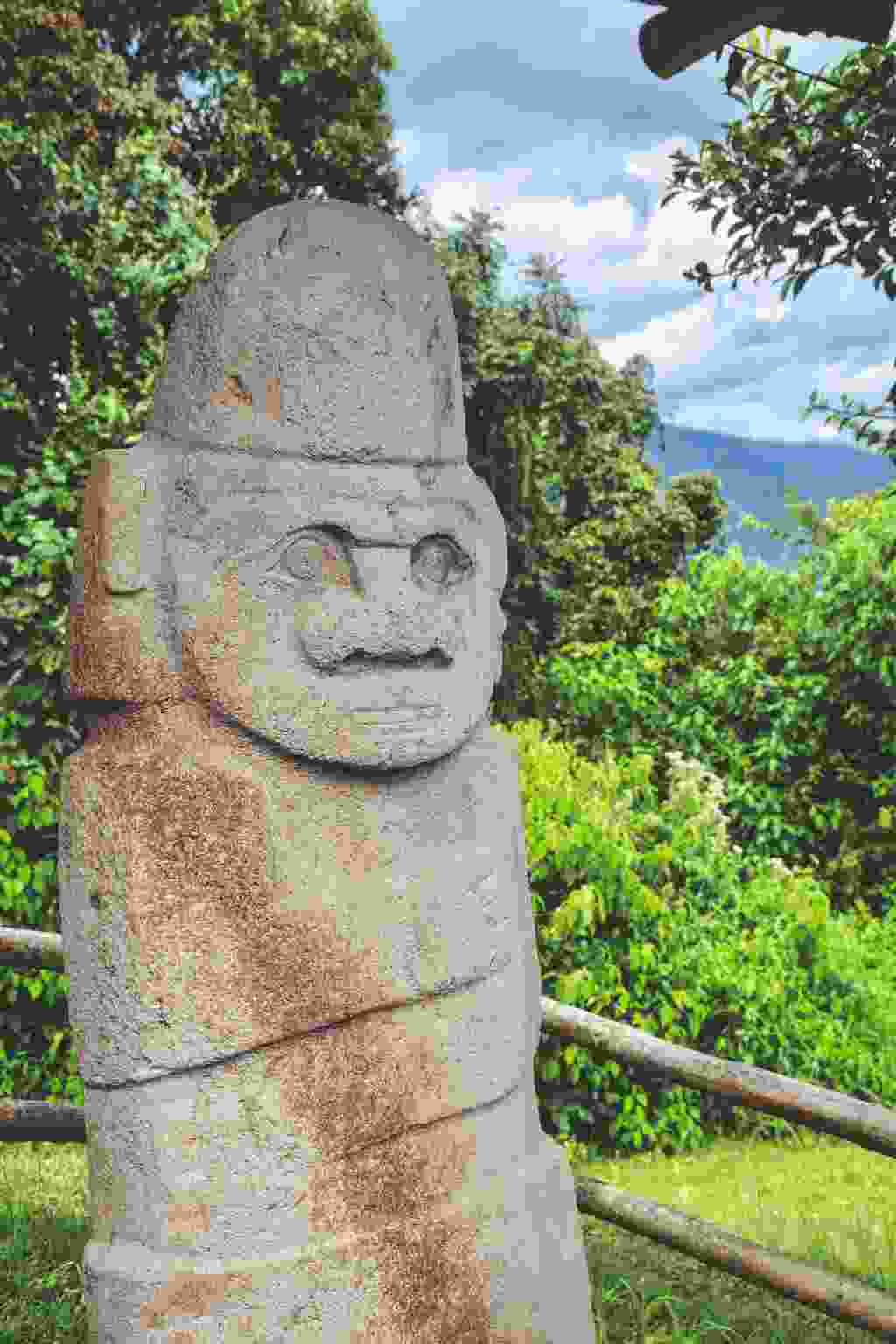 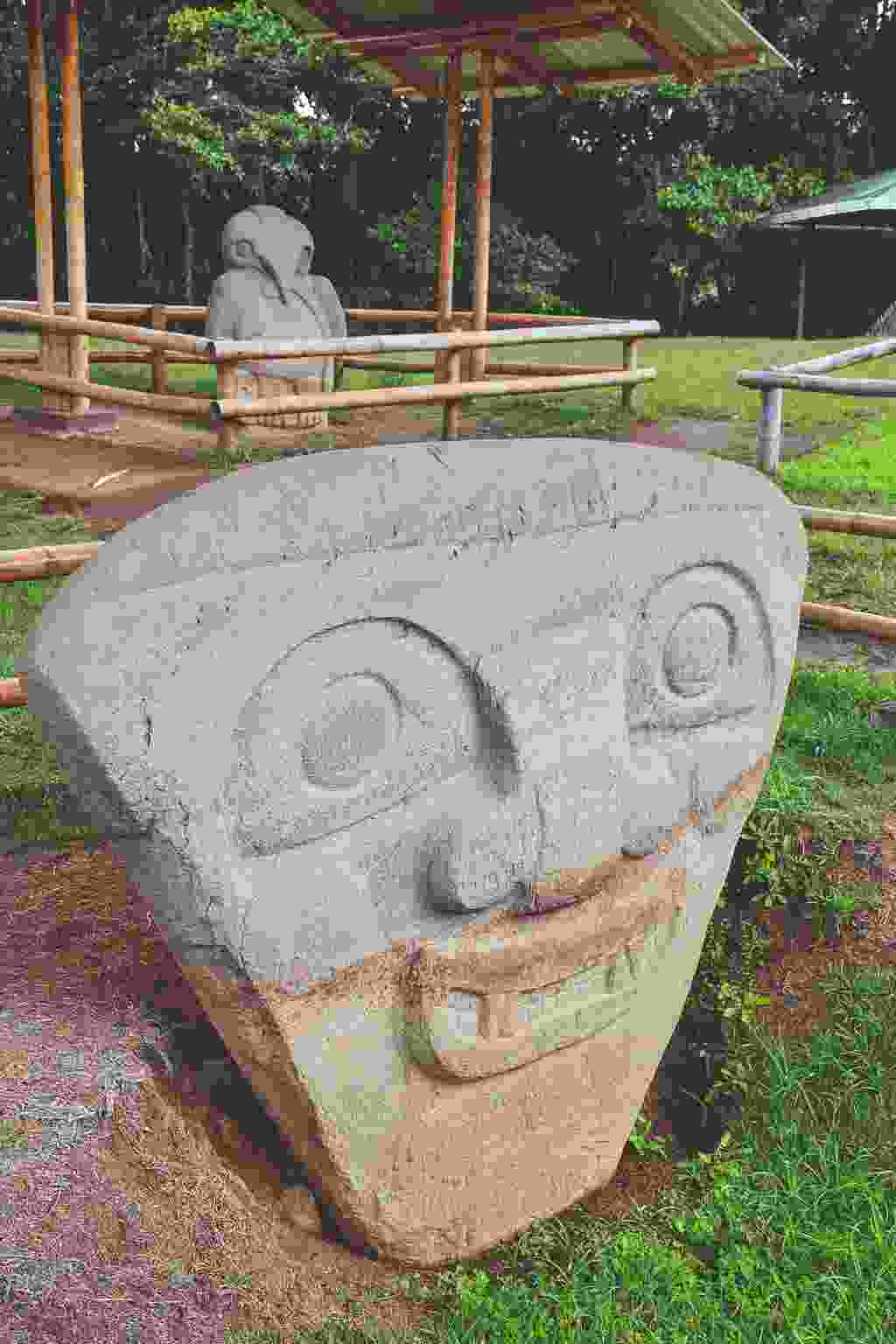 I was on the Colombian massif in the Huila province, an outcrop of mountains where the Andes, the world’s longest mountain chain, unwinds like a rope into three cordilleras that make up the mountain ranges of western Colombia.

The river below was the Magdalena, the country’s longest, which is over a kilometre wide when it meets the Caribbean in the Colombian seaport of Barranquilla.

But I was standing at its youth where it rushes through El Estrecho, a channel in the rocks two metres wide. “In the local language it’s called Guacacallo, ‘the river of tombs’,” Jorge told me.

There are over 500 statues and 40 burial mounds scattered throughout the hills surrounding the Alto Magdalena region, hence the name. And I’d spent the day exploring the vertiginous countryside by the river on horseback.

If the landscape wasn’t enough of a draw, the tombs of San Agustín with their imposing carved statues certainly were – indeed, they were what I’d come to Colombia to see.

Latin America is awash with ancient civilisations known for their architecture, from the Incas in Peru (famous for building Machu Picchu) to the Olmecs and Aztecs in Mexico and the Maya in Central America.

However, we have no idea who built the statues at San Agustín. They’re simply called Cultura del Alto Magdalena (the Upper Magdalena Culture) or the Pueblo Escultor (Sculpture People).

The statues and graves date from AD1-900, although some discoveries have also been made here dating back to 3,300BC.

Chronologically, this places the classic San Agustín remains after the colossal Olmec heads in Mexico, roughly contemporaneous with the cities and pyramids of the Maya and before the rise of the Aztecs and the Incas from AD1300. 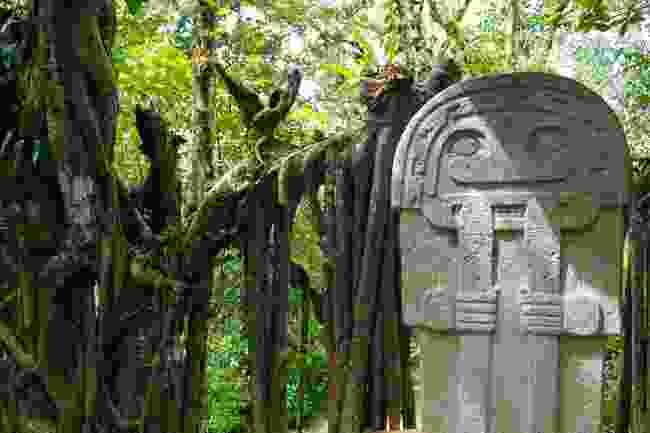 The main concentration of the San Agustín tombs is in what is now an Archaeological Park about three km from the centre of the town.

This UNESCO World Heritage Site was where I began my trip. First created in 1937, it has developed dramatically since then – but while it’s the largest necropolis  in Latin America, it is still little-known.

One of  the reasons for this is that for many years this  area was dominated by the Fuerzas Armadas Revolucionarias de Colombia (FARC) guerrillas, an extreme left terrorist group.

While Colombia has long been associated with drug cartels, guerrillas and unrest, more and more areas are opening up to visitors and it is now perfectly safe to visit San Agustín and its surrounds. 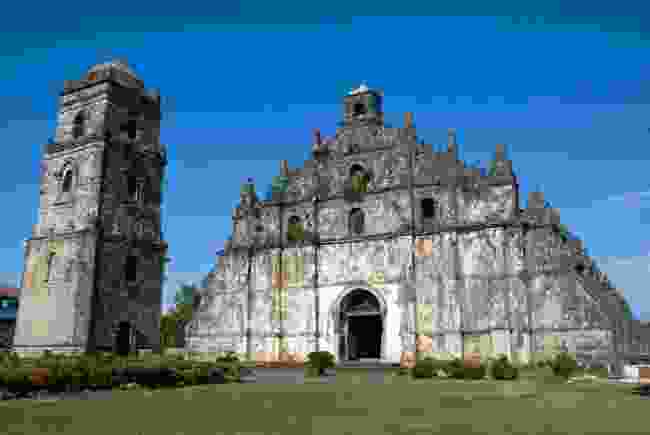 On arrival at the park Jorge explained that the tombs are dotted in three clearings: Mesita A, B and C, which are surrounded by dense primary forest of bamboo, rubber and heliconia trees with their bird of paradise flowers.

As I walked to the first clearing, I thought to myself it must have taken masses of machetés to find and clear this place.

Mesita A is the biggest of the clearings with  some of the most impressive tombs. They appear as massive stone gateways, with three statues supporting a stone lintel. Made of local volcanic rock from the extinct volcanoes that surround San AugustÍn, the softish stone was carved with harder basalt.

The central figure is thought to represent the inhabitant of the tomb, with guardians on either side. The bodies were buried with tools, food, ceramics and precious objects from gold or tumbaga, an alloy of gold and copper, which has a lower melting point and supports more fine detail. These objects suggest a belief in some sort of an afterlife.

The tomb that struck me as most impressive is thought to depict a shaman. Jorge had spent  time with indigenous tribes in the Amazon and said the shamans there wear a headdress with 33 feathers just as this statue does. In his hands, he holds the tools of his trade as a coquero: a stick in his right hand and a long vessel (poporo) in his left.

Shamans used sacred plants such as ayahuasca and coca to get into hallucinogenic states. Coca leaves on their own have little effect, so they were mixed with lime powder, made from crushed shells, kept in the poporo and extracted with the dipping pin. The shaman has sharp pointed jaguar’s teeth and is flanked by protective deities bearing weapons.

Above their heads are animal figures which curve down the back of the statues. They are thought to represent the visions or altered states from which the shamans get their power.

While these figures are fantastical with their jaguar teeth and hovering alter-egos, just beside this tomb I discovered a much more simple human figure with his arms across his chest, wearing what looked like the sort of felt cap still worn by the Arhuaco, Kogui and other indigenous people in the mountains. 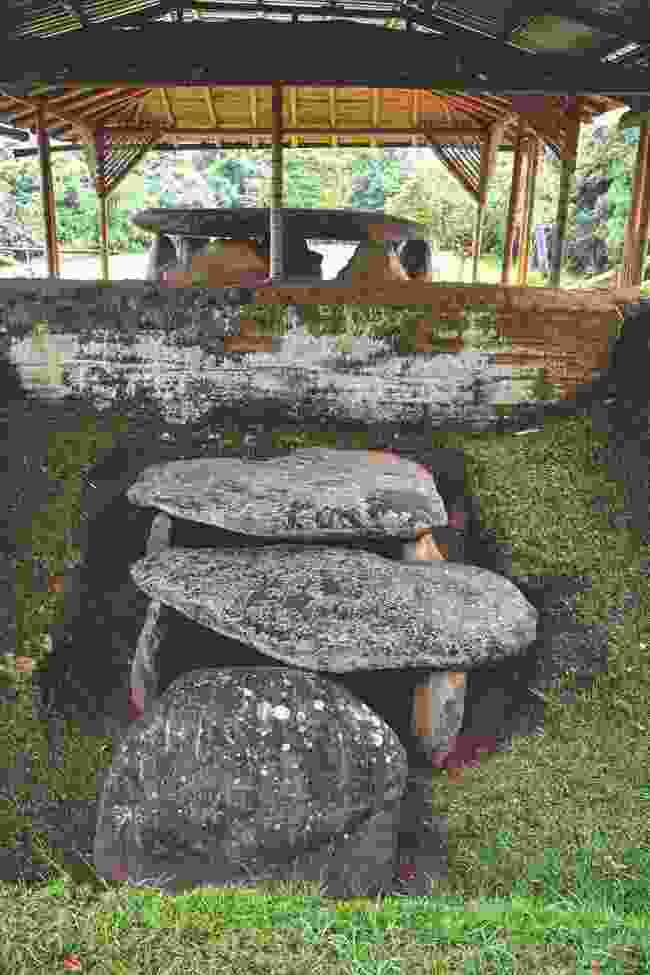 I found it rather comforting to locate a human figure here, alongside the mythical and ceremonial ones.

Although the Upper Magdalena People disappeared before the conquistadors arrived in the 1500s, there are still similarities in the culture, clothing and beliefs of Colombia’s indigenous people to this day.

But these sculptures were never actually intended to be seen. Buried under mounds of earth at least as high as the protective canopies built over them today (just like dolmens in Britain), the statues were intended to protect or sustain the deceased in the afterlife.

As we passed a bird-like statue, Jorge explained that this figure represents the meeting of the upper world and the lower world.

A bird of prey grasps a snake, which perhaps evolved into the ‘plumed serpent’ found in Central American culture and on the Mexican flag.

The snake is not dead but living, and this cosmic mix of bird and serpent is thought to represent an equilibrium between the sky and the earth. 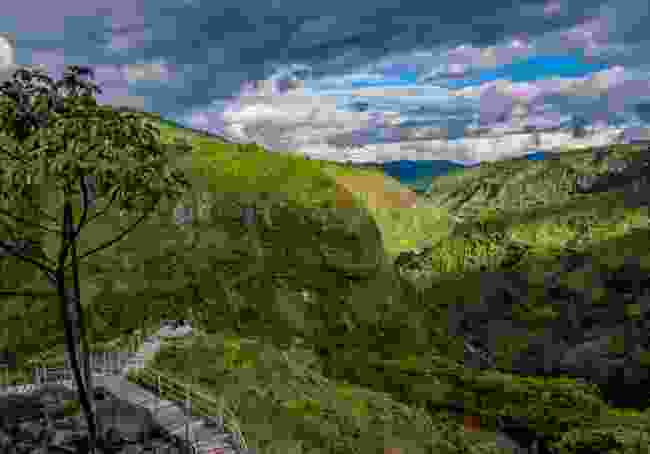 After admiring the statues, we made our way to  the final section of the park. It was a steep, but worthwhile climb up to the Alto de Lavapatas, where the earliest remains were found.

Here, I encountered another fine collection of statues including an impressive double figure, and  a glorious view of several volcanoes.

Below me was the Fuente de Lavapatas, not so much a spring as a stream channelled over a rocky outcrop with pools and animals carved in relief –  a snake, a cayman, a monkey – and a woman giving birth.

This has led to suggestions that it might have been a birthing pool. I’d love to have been able to get closer, but it was firmly fenced off.

It reminded me of another mysterious place of watery worship, Kbal Spean, not far from Angkor Wat, in Cambodia.

It’s easy to spend a full day in the park and there’s plenty more of this lost world to explore further – it’s thought that only 10% of these tomb guardians and burial mounds have been uncovered.

There were quite a few visitors, mostly Colombian. But just by walking away from the main tombs, it was easy to be alone in this glorious place. 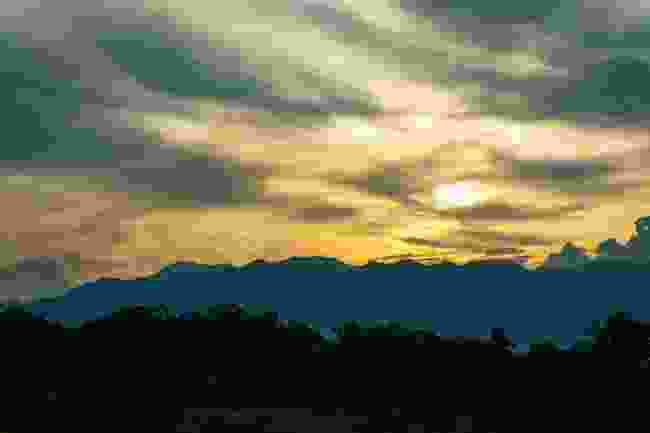 Although the majority of the statues are in the Archaeological Park, it’s well worth exploring the more remote sites further afield – either in a vehicle or better on horseback.

This is where you get a sense of the landscape and how these tombs are nestled in its most dramatic places. I had no riding experience and had always felt nervous about horses.

But the horses are used to the tracks and with Jorge I felt in safe hands. It was thrilling to thunder across the hills, down into the valleys and experience the environment the way the locals have done for centuries.

Jorge, very much at home, knew which plants have natural dyes, which he used to paint a picture in the ‘passport’ to the various sites, which was included with the entrance ticket.

The round trip included El Tablón, five fine statues at the foot of La Pelota volcano, La Chaquira, the sacred site above the Magdalena river, and El Purutal, a grave site only uncovered in 1985.

Apart from a spectacular ride through the coffee and lulo fruit plantations, what made  the latter worth seeing was the painted statues, in red, blue and yellow.

The ones in the park are also painted, but over the years the colour has disappeared. Much of the region is unexcavated, so there is probably much more to be discovered. As I climbed up from the viewpoint at La Chaquira, I stopped to listen to the woman’s song. 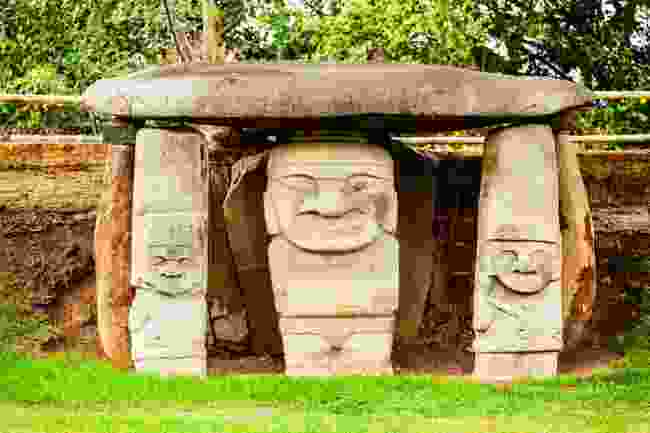 “God wanted to put his throne in one part of the world. After a lot of searching he came to my beloved Huila and founded San Agustín in his profound mystery. Then he created the Magdalena River so all Colombian people could drink the water of this land that is their glory,” she chanted.

The song celebrated the beauty of the Colombian massif, and made me realise that this viewpoint is still a place of reverence and devotion today.

Whoever the Upper Magdalena People worshiped, the new inhabitants share the same instincts. We may never uncover the mystery behind the remnants of this ancient culture, but we can still see it in all its glory. 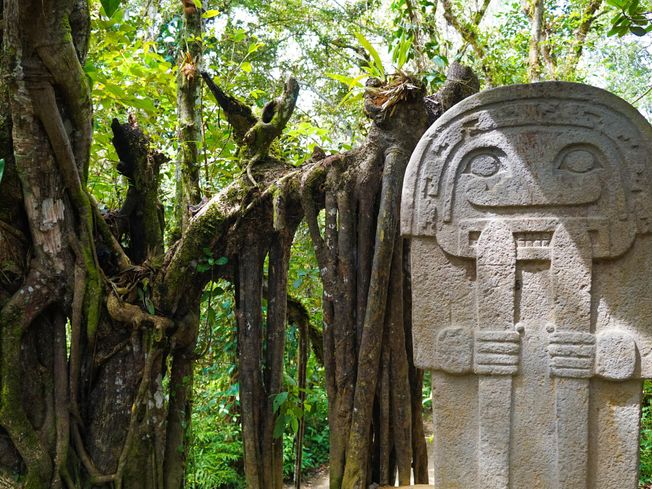 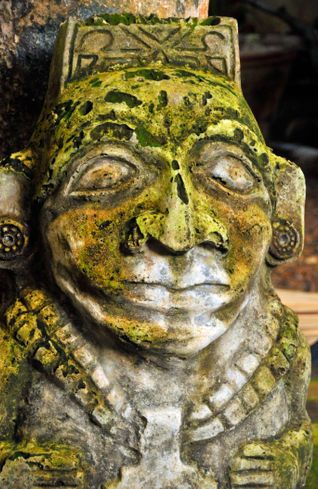 The author travelled independently flying with Avianca, courtesy of Pro-Colombia and spent three nights in San Agustín at the Akawanka Lodge.

15 lost worlds for you to discover

7 reasons you must visit Cali, Colombia