Couldn’t make our live Northern Territory event? We have the full recording and the answers to your questions here...

After Phoebe, we were joined by the experts at Freedom Destinations and Tourism Northern Territory who not only answered our questions but offered Wanderlust readers an exclusive holiday offer and gave away 10 goody bags stuffed with Darwin gin, speakers, phone card holders and other treats.

If you missed the event or had to leave early, we have the full recording of the event plus the answers to your questions right here...

Don't miss out on an exclusive offer from Freedom Destinations

Check out the Freedom Destinations website for all the amazing and inspirational products and experiences there are within Northern Territory. For help and advice, call one of Freedom Destination's experienced Australia consultants on 0333 234 2859. They will discuss the options with you and create your Australia itinerary and ultimately book your arrangements.

If you had a crystal ball, when do you think Australia will open up to overseas visitors?

(Fleur) We expect borders to open in 2022 but it's up to Federal Government so we just have to wait and hope! I would say you’re pretty safe aiming for 2022! What is great about the Northern Territory is that is perfect for social distancing. The population is 200,000 across the whole Territory yet it is six times the size of Great Britain so you can easily spread out: it’s a great self-drive destination so it is easy to avoid the crowds when travelling, too!

What is it like as a solo traveller in the Northern Territory?

(Phoebe) I did a mixture of walking around by myself in places such as Alice Springs and Darwin, including going to the Mindil Sunset Market by myself and everyone was absolutely lovely. I like to use guides when I go to places like Katherine Gorge and making the most of people with such great experience like Graham when we went to the Billabong, where I learnt not just about the birds and the crocodiles, but of his experiences growing up in that place. Australia as a whole feels absolutely fine for a solo traveller and in the NT everyone is so welcoming and warm. In the Tiwi islands, I felt like I had become a part of the community as it is so small. The NT is the sort of place where you get out what you put in: if you are interested, talk to people and ask questions, they want to share it with you as well.

What would you suggest to somebody as a typical itinerary?

(Jen) The great thing about the Northern Territory is its accessibility. Initially you should base yourself in Darwin. Darwin is a very unique Australian city unlike any other. It has a great mix of that relaxed outback feel while still having a metropolitan vibe. It’s one of those places where as soon as you land there, you know you are in Australia! So stay in Darwin for a couple of nights and explore the museums and the World War II history: the Mindil Market is also a must. And then you simply have to go to the national parks ofKakadu and Litchfield plus the Tiwi islands. These places are very accessible from Darwin, it’s just an easy drive away, or a ferry in the case of the Tiwis. Litchfield can easily be done in a day but for Kakadu I would recommend a bit longer to fully explore the full wonder of it, so spend a couple of days and use a local guide. The stories that you get just bring the park to life.

After that, I would travel on the Ghan! It’s my happy place! If you want to see the Northern Territory become a moving postcard outside your window from dusk until dawn then travel on the Ghan. The sunrises, sunsets and colours are just immense.

And then travelling to the Red Centre you’ve got your classic Uluru/ Ayers Rock and Alice Springs but I don’t think people realise the distance between them sometimes. It can take up to five hours to drive so don’t forget you can have adventures between these destinations and it’s not about just going from A to B, there’s some beautiful  spots in between. This is a region where you can really take your time and meander through to really immerse yourself in. One of the other places worth visiting on route is Kings Canyon which has beautiful panoramic vistas, and great walking trails. You feel like you are in the middle of nowhere.

So that would be a classic itinerary for combining the Top End with the Red Centre. 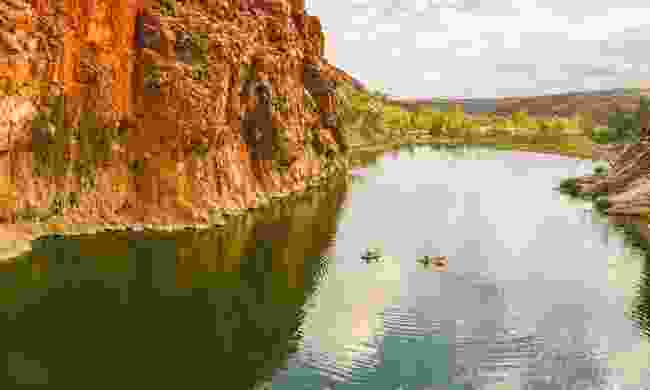 When is the best time to travel?

It depends on what your goal is. Peak season is late April through to October which means warm days and cool evenings in the Red Centre and dry weather, blue skies and warm evenings in the Top End. If you want lower prices, less crowds and want to see things like the waterfalls in full flow and the lush greenery in the Top End then you should travel in low-season which is November to March.

Are there any luxury accommodation options in the red centre or are swags the way forward?
Absolutely! The great thing about the Northern Territory is the luxury accommodation that we have is so distinctly of the place. Instead of your typical five-star luxury, it is more authentic luxury. In the Red Centre, the most famous place is Longitude 131. Up in the Top End we have Bamurru Plains which is in the Mary River floodplains, a luxury lodge set on a working buffalo station. In Alice Springs Crowne Plaza Lasseters has just been refurbished and is a good option.

Phoebe suggests sleeping in a Swag and finishing on the Ghan for a luxury train ride. Phoebe experienced the Ghan Expedition which is the longer option that runs from April to October and is like being on a cruise but on land. Everything is taken care of for you from the cabin to the food and the excursions.

Are there any etiquette tips for visiting the islands (or aboriginal groups elsewhere in the NT) please?
There's no specific etiquette when visiting the Tiwi Islands and meeting local Indigenous communities. We'd recommend asking for permission before taking photos. They're very friendly and welcoming!

How much time should you allow for a trip to the Northern Territory.
Give it as much time as you possibly can within your Australia trip. My advice would be to break down the Top End and the Red Centre and treat them as two sections. I would say you ideally want seven days in each as there is so much to see and do, but you can do it in less.

Where do you recommend to look for a good guide?
There are so many amazing tour companies which operate in the Northern Territory – all of whom are passionate and excited to share their enthusiasm for their homeland and culture. There are so many different guide options from large group escorted tours to private guides who will escort you. Freedom Destinations can help source an option which is right for you. If you do want to do some research of your own before talking to them then head to northernterritory.com

How is transportation for those who don't drive a car? Is there a sort of public transport system apart from the Ghan?
There is good public transport in and around the main towns and cities like Darwin and Alice Springs and Greyhound run services between them. You can also easily get taxis and Uber. There is also a good domestic air service within the Northern Territory ranging from small aircraft operators to the main commercial airlines. Qantas offer flights from Darwin in the Top End to Alice Springs within the Red Centre so you can easily fly between the two main regions. But our recommendation, if you don’t drive or don’t want to drive a car or camper, is to book onto a tour. There is so much to learn about the nature, culture and history of the NT that a tour will give you lots of info you wouldn’t otherwise get. There are lots of tours that run through the Territory with tour operators like Wayoutback and Intrepid.

I love waterfalls is Florence falls easy to get to and which do you recommend?
Florence Falls is in Litchfield National Park which is a really easy 1hr-1.5hr drive from Darwin. Once you arrive at the Falls car park, there is a staircase down to the falls. It’s quite a long way down but there are places to stop on the way and there’s a loop back to the car park if you don’t want to tackle the stairs! Litchfield is a great spot for swimming in waterholes and waterfalls so this would be the perfect spot for someone who loves them! Other places to check out at Litchfield are Buley Rockhole and Wangi Falls.

Kakadu also offers spectacular waterfalls, namely Twin Falls and Jim Jim falls which are accessible by 4WD vehicle in the dry season. Remember, if you want to see the falls in full flow then that means a visit  is during the  wet season (November to March). However, they  are inaccessible by road at that time of year so we recommend a scenic flight to see them in all their glory from the air. 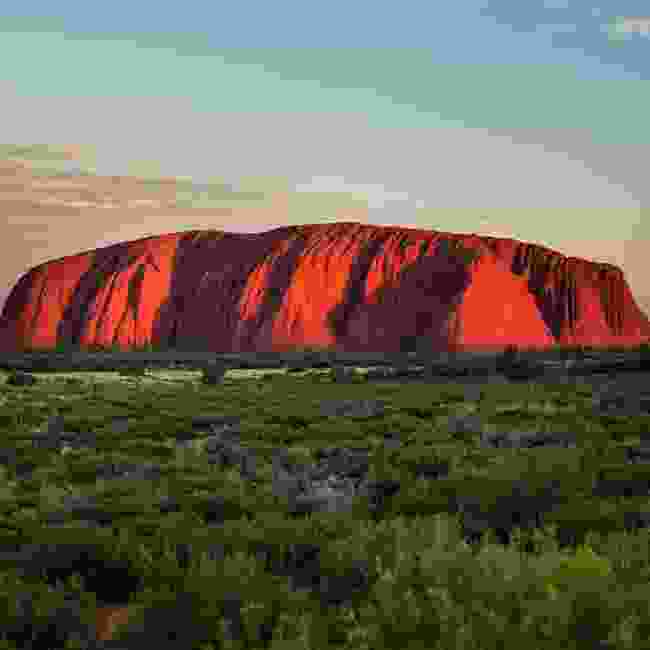 I have to go to Tiwi!

Fascinating! I love your enthusiasm.

Great to kick off with an operator who is promoting sustainability.

Wonderful overview! Thanks very much!

Thank you that was brilliant

Wow! Thank you phoebe, your experiences sound amazing. There’s so much to see and do!

Totally inspiring! I've just got to go there!

This webinar is really inspiring me to go!

Such an informative hour - loved the enthusiasm and videos. Can't wait to go! Thanks very much.

Thank you for a fabulous evening, I can't wait to go.

Love everyone’s passion. Definitely need another trip to the NT.

Top recommendations from the expert speakers

Jen: For me it is sunrise at Uluru/ Ayers Rock! Just waking up in pitch black, being driven into the middle of nowhere and all of a sudden this immense silhouette and a kaleidoscope of colour just emerges it’s like a dream! It’s one of those spiritual moments where you just feel so small in the world.

Fleur: Davidsons camp in Arnhemland is amazing! Amazing rock art,great fishing, incredible birdwatching - it is just fantastic to be there. The second place is Bullo River Station which is out near the Western Australian border where you can get involved with the working cattle station, you can horseride, helicopter, fish, swim, birdwatch. It’s a great way ti gain an insight into cattle station life while still having the comfort of luxury accommodation and experiences.

Phoebe: I completely fell in love with Darwin. It feels like Australia but also feels completely different to anywhere else in Australia. The sunsets are amazing and the aboriginal culture really permeates the whole culture of the city, you can swim with crocodiles (in a safe way at Crocosaurus Cove only!). And if you do go, I have to recommend the tour with Graham from Pudakul. It was the first time I had been on an aboriginal owned and run tour where I really did feel like I could ask anything I was curious about and I wasn’t going to offend, he is was very open and honest.