Reader's story: Hitchhiking (and falling in love) in Ethiopia

Jo and I hitched out of Marsabit on the back of an overloaded goods lorry. The road, if you can call it that, was a faint trail cut through a desolate, rocky moonscape.

We bounced around for 12 hours like the sacks of potatoes upon which we precariously perched. When we finally reached Moyale on the Kenya/ Ethiopia border we were covered in a layer of red dust so thick we looked like sand sculptures.

Though our guesthouse had no running water the owner kindly gave us a precious bucket of water to share. As we washed, the dust turned to smudged clay. We laughed like crazed hyenas when we looked at ourselves in the cracked mirror and saw the faces of two made-up Maasai warriors staring back. It wasn’t until we reached Addis Ababa a week later that we were able to scrub the last remnants of red ochre from our ears, eyes and noses.

The year was 1992, just after the end of Ethiopia’s 17-year civil war. We seemed to be the country’s only tourists. Everywhere we went children stared at us as if we were ghosts. As we hitched north, toward Aksum, it looked like a giant tsunami had decimated the landscape. We passed hundreds of burnt-out tanks abandoned on the side of the road.


Refugee families squatted in bullet-ridden buildings with caved in roofs. At night we slept in a series of bedbug-infested shacks set up to serve the lorry drivers and their prostitutes. Our bodies became a mass of itchy red welts. None of our trials mattered though because we were newly, crazily in love.

We kissed with mud-splattered lips. We clung to each other as the lorries we rode in teetered on the edge of precipitous mountain curves. We made passionate love half-clothed on rickety termite-ridden pallets. But mostly we just laughed and laughed and laughed. And our laughs were infectious. We were like pied pipers. Children clung to us, faces beaming with happiness, as we walked through the villages. Toothless old women invited us into their humble homes for coffee and giggled like schoolgirls when Jo and I made googly-eyes at each other. Even the jaded, over-worked lorry drivers seemed to get a kick out of our very un-African public displays of affection. 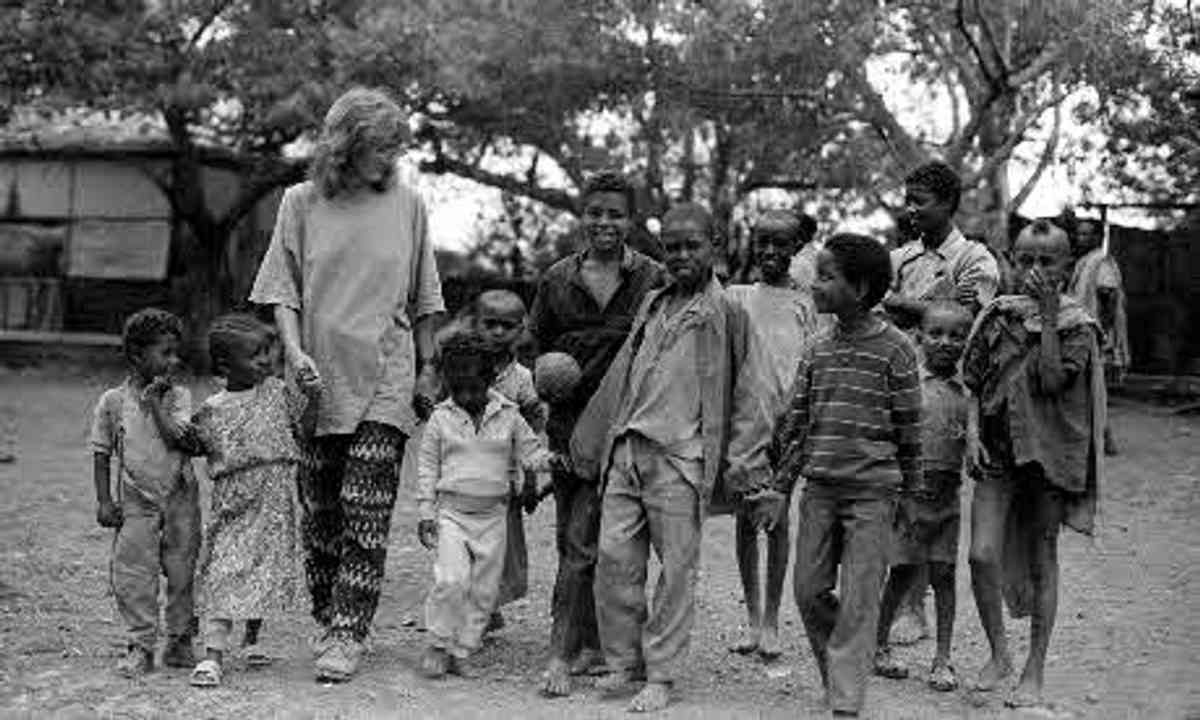 North of Bahir Dar we got some relief when it began to rain. The drought had ended! Unfortunately, for the next week the rain never stopped. The lorries we rode in slithered like over-sized snails up and down the steep foothills of the Simien Mountains. When our lorry got stuck in mud we had to walk ahead barefoot because the two-foot deep muck on the roads sucked the shoes right off our feet.

When we finally reached Aksum it felt like a marvellous accomplishment. To celebrate the end of our pilgrimage, and the fact the sun was shining for the first time in days, we decided to trek to the Queen of Sheeba’s Palace, an archaeological ruin outside of town. But before we reached our goal the sky darkened, lightning bolts flashed across the heavens and a biblical rain began to fall.


We dashed for the only cover in sight, an old farmer’s cottage. Its roof had caved in, so Jo and I were forced to huddle beneath the building’s only remaining door frame. The wind howled. Lightning struck all around us. It rained so hard the cottage began to crumble. Big dollops of stucco began to drip onto our heads and shoulders.

“What’s that smell?” Jo screamed over the roaring thunder. Then it dawned on us. The walls’ bricks were made using dried animal manure and we were being showered with shit. Jo and I looked at each other with undisguised misery in our eyes. We screamed, we howled, we cried, yet we didn’t dare go out and face the full fury of the vicious storm. Instead, we clung to each other desperately as rivers of manure ran through our hair and down our faces. And then we began to laugh. We couldn’t stop. A flash of lightning lit up the tears streaming down Jo’s face. It was at that moment that I knew with absolute clarity that Jo was the woman I would marry and spend the rest of my life with.

We’ve been married 17 years now, but I’ve never seen her look more dazzling, more radiant or more beautiful than she looked standing there, laughing hysterically in the driving rain, covered in dung.
ALL INTERESTS