In the waters of dreamy Halong Bay, Reader James Rowland falls for a French girl and plots a Vietnam adventure. It all started with a pair of knickers...

It was the first time I had introduced myself to a girl by handing over her underwear. We were treading the cool, calm waters of Halong Bay, off the coast of north-east Vietnam, when a giggly shriek let me know something was amiss.

On a slightly panicked request I swam a few metres and retrieved the misplaced knickers. The fluorescent-pink lace stood out from the darkening water, shimmering in the early evening sunset. A wry, flirtatious grin flowed nicely alongside her handshake shortly after I handed them over.

Her name was Emmanuelle and she was from Paris. She had enormous blue eyes, flowing mousey-brown hair bleached by the tropical sun and an understatedly spellbinding ability to remain classy and charming in a tight spot – a trait all-too symptomatic of the French. I was envious and in love all at once. Having just dived into the water from the top deck of our sleeper boat, fifteen feet up, she had lost her poor substitute for a bikini, to the excitable cheers of our spectators.

A small army of endearingly tipsy Canadians stood alongside some steadfastly cool and typically attractive Swedes on the top deck. I thought they were getting overly animated at my canon-balling skills when I heard the wild screams. As it turns out, there are few things in this world that bring out a more devilishly raucous reception from young men than a half-naked, luminously beautiful French girl treading water. 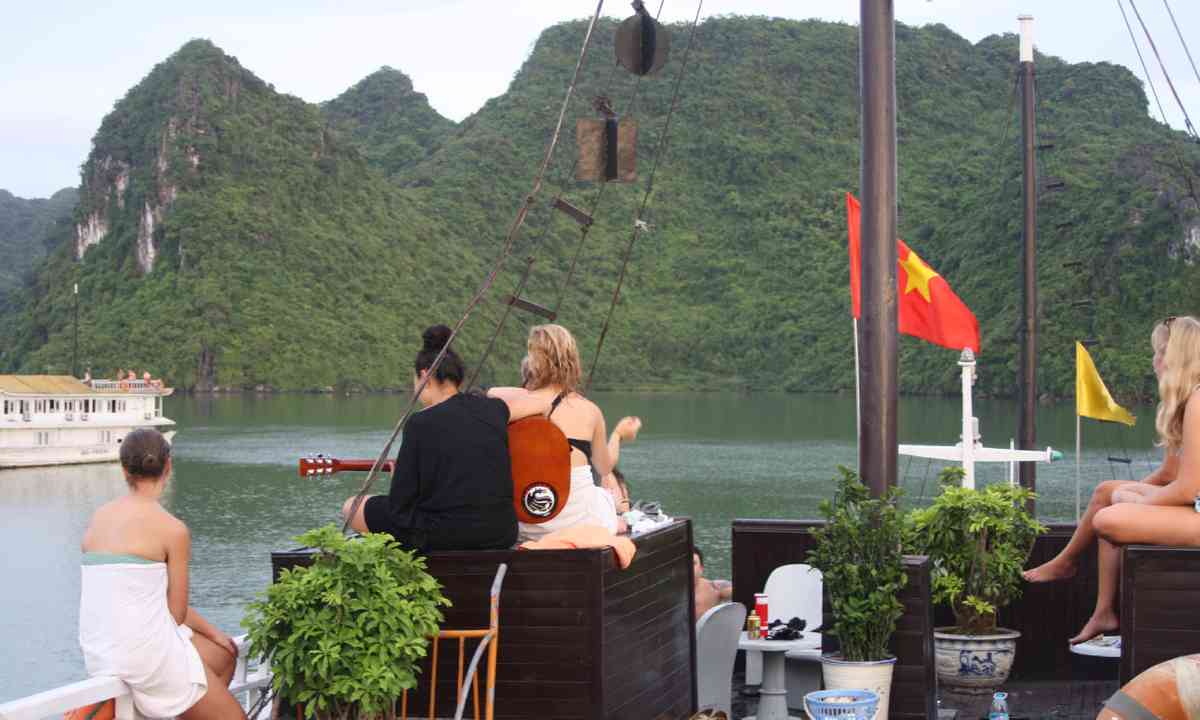 Following our introduction I ventured that “the best of us lose our knickers at the worst of times”. Emmanuelle honoured my clumsy attempt at reassurance with a broad, enticingly pretty smile and a pronounced “Merci!”.

As we talked I took note of the schoolboy infatuation pulsing through me. All the while the sun retreated over the jagged, jungle-covered islands of Halong Bay, leaving a crimson sky in its wake. It was one of those moments you simply wish it was possible to package and take with you. As we discussed the benefits and pitfalls of climbing aboard and repeating our stunt off the top deck, an elderly Vietnamese lady slowly rowed over to us in her sampan with snacks, coffee and cold beer on offer.

“Hey Jimmy!?” They were calling for me from above. A drinks order was being belted out by our audience. I’ve worked some bars that would pass for toilets in my time but I have never had the opportunity to round up drinks while neck deep in one of the natural wonders of the world, accompanied all around by beauty incarnate, both in the water and in the evening sky. It really is a stranger and sweeter notion than it seemed at the time as I write this in the loft room of my mother’s house in Suffolk, the summer rain pelting down onto the roof tiles only a few feet above my head.

A shower of Vietnamese dong (the local currency) rained down into the water from our Canadian friends above. Emmanuelle climbed up the deck ladder and helped me perfect the act of treading water while bar tending. We handed out the cold beers, dried off, ate a dinner of steamed rice and charcoal grilled fish caught over the side minutes earlier, and took turns to play songs on the guitar that was working its way around the group. Someone always has a guitar in these scenarios. Few can pull off a guitar moment.


Someone always has a guitar in these scenarios. Few can pull off a guitar moment

The pearl-fretted Gibson belonged to a giant Canadian man called John Harrison. How apt. It was the sort of name that belonged to John Wayne’s sidekicks in old Westerns. John’s overbearing physique and friendly-come-razor-sharp demeanour were those of an old frontiersman. He headed the musical proceedings, leading us in a chorus of classic folk, blues and soul songs from Woody Guthrie to Gloria Gaynor, along with some Flight of the Conchords for comedic measure.

John had a tattoo of a bear paw with long claws on his right bicep. He described it as “the oldest Native American symbol ever found in Canada”. He said it was copied from an ancient cave carving. I ventured that he was copied from an ancient cave carving, to an appreciably booming guffaw. John wore a baggy T-shirt-come-tanktop with a faded image of Jimi Hendrix on the front. He looked as though he was born with an alpine forest of stubble and drank Vietnamese draft like it was his duty. A real new world phenomenon. John was happy, sincere, blunt and prided himself on his sense of hospitality and generosity. He was a breath of fresh air.

Emmanuelle talked at length about her work at a junior school in Burma, bribing police after being caught speeding on her motorcycle in Saigon and buying marijuana from our boat captain that morning. Here is where I expressed interest in the freedom of a motorcycle trip, and how I was “seriously considering it”. Truth be told it was a vain attempt to counterbalance the stream of sheer cool that was pouring from her stories. Travellers tend to do this. A little one-up-man-ship.

At the time, the idea of motorbiking anywhere seemed fit only for throw-away conjecture over a hedonistic drinking session with fellow backpackers. Riding solo through open Vietnamese country sounded astonishing, yet slightly too terrifying to entertain for long. After all, if crossing the street in Vietnam is an act of faith, what would joining the traffic for weeks at a time be like? I’d need at least one more beer to be convinced I could replicate Emmanuelle’s adventures.

It was right then that everything turned upside down...


What happened next? Read more of James Rowland's experiences on myWanderlust - including the latest installments of his Vietnam adventures...